“We are running a race with Bolshevism, and the world is on fire.” President Woodrow Wilson, Paris, March 1919

A revolutionary wave swept throughout Europe following the First World War. Millions of war-weary troops and workers, under the impact of the October Revolution in Russia, rose up to challenge the capitalist system. The war itself was not ended by the defeat of Germany, but by the German Revolution of November 1918. Following the example of the Russian workers, they overthrew the monarchy and established workers’ and soldiers’ councils all over Germany. Following the establishment of a Bavarian Soviet Republic, a Soviet Republic was declared in Hungary.

It would have been gratifying to the Allied forces to brush aside an armistice and press on with the war until unconditional surrender. However, under the conditions, such a strategy would be highly dangerous. Britain’s Chief of the Imperial General Staff, Field Marshal Sir Henry Wilson, wrote in his diary on 9 November:

“Cabinet meeting tonight… Lloyd George read two telegrams from the Tiger [Clemenceau] in which he described Froch’s interview with the Germans. The Tiger is afraid that Germany may collapse and Bolshevism gain control.” He then went on, “Lloyd George asked me if I wanted that to happen or if I did not prefer an armistice. Without hesitation I replied ‘Armistice’. The whole cabinet agreed with me.” 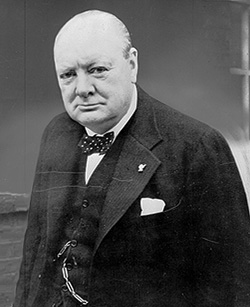 Winston ChurchillThe following day, at a further Cabinet meeting, Churchill stressed the Allies’ new priority: “We might have to build up the German Army, as it was important to get Germany on her legs again for fear of the spread of Bolshevism.”

The German High Command was prepared to put itself at the disposal of the new Social Democratic Chancellor Ebert on one condition. ”The officer corps demands of the regime a battle against Bolshevism, and is ready for such an engagement”, explained General Groener. Ebert accepted the offer.

In Paris, while the war was still going on, General Foch even began drawing up plans for German troops to be joined with Americans and French to wage an offensive on the Bolsheviks. The overriding objective of the imperialist powers was now to aid the counter-revolutionary White armies in their efforts to destroy the Bolshevik Revolution and re-divide Russia. American, British, French, Czech, Canadian, Japanese, Serb, Polish, Greek, Italian, Romanian and German forces were already involved on Russian soil. Anglo-French imperialism were determined to carve up Russia into “spheres of influence”, with the British interested in the oil fields, including the Caucasus, Armenia, Georgia and Kurdistan; the French wanted their hands on the coal and iron mines of the Ukraine and the Crimea.

Churchill was determined to use British troops to overthrow Lenin and the Soviet government. There was to be a slowdown in demobilisation, and greater conscription for a fresh war against Russia. However, the troops were desperate to return home, sickened by the carnage of the trenches. Suddenly, there was mutiny and the spectre of revolution hung over Britain at this time.

At the time of Armistice, there were six million British troops under arms. According to Field Marshal Sir Douglas Haig, one million were needed to lead the occupation of the Rhineland, Palestine, Mesopotamia and German East Africa. More were need to keep India in subjection.

The first mutiny broke out in Folkestone on 3 January 1919. Orders were posted in No.1 Rest Camp that 1,000 men were to parade at 0815 hours to embark for France, followed by a further 1,000 at 0825 hours. A soldier had written over the orders “No men to parade”. Not a single man turned out. Word then quickly spread through the town’s three camps and 3,000 men from the first camp had decide not to march to the ship but march on the town hall, where they held a meeting.

Men from other camps rushed to join them and some 10,000 soldiers assembled outside of Folkestone town hall. Speeches were made complaining about conditions and how they were being treated. When the town mayor showed up and reassured the men, he was met with the chorus of a popular song, “Tell me the Old, Old Story”!

The men were then addressed by the Lieutenant Commander who assured them there was to be no compulsory embarkation to France. The mail boat sailed to France with no soldiers on board. However, the next day new orders were issued proposing a certain quota. This provoked a further demonstration, this time at the harbour. This met the troop trains carrying those returning from leave, who immediately joined the strike. The armed guards at the harbour entrance were withdrawn as strikers threatened to collect their own weapons and return.

There were similar protests at Dover on the same morning, when about 2,000 troops turned back from Admiralty Pier where they were supposed to board a ship for France. They met the trains full of soldiers, who quickly joined them. They marched in full field kit and rifles, representing scores of different units, to the town hall to put their grievances. They then proceeded to form a Soldiers’ Union and elected a committee entirely of rank and file.

In several parts, especially in camps in and around London, mutineers commandeered lorries and drove to Whitehall to deliver their protests directly. On 9 January, 1,500 soldiers based at Park Royal in west London marched on Downing Street to confront Lloyd George and the Cabinet. Cunning Lloyd George was prepared to meet the men, but Lord Milner advised against as “similar processions would march on London from all over the country.” General Sir Henry Wilson declared that “the Prime Minister should not confer with soldiers who had disregarded their officers. The solders’ delegation bore a dangerous resemblance to a Soviet. If such a practice were to spread, the consequences would be disastrous.”

Instead, General Sir William Robertson was sent out to meet a delegation and agreed to their demands for better conditions and an end to the draft for Russia. The troops then returned to barracks.

British troops were also affected in Calais. Soldiers were proving equally unwilling to fight and to obey orders. Towards the end of January 1919, the men of the Army Ordnance and Mechanical Transport sections at the Val de Lievre camp organised a mass meeting which took the decision to mutiny. The mutiny broke out after agitation for demobilisation as the arrest of Private John Pantling, of the Royal Army Ordnance Corps, who had had a speech described by the authorities as a “seditious speech to an assembly of soldiers.”

Rebel soldiers broke into the prison and released Pantling. Military police were brought in to restore order, but the growing anger forced the Commanding Officer to relent and offer concessions. Word spread and Soldiers’ Councils were organised in other camps. When the authorities attempted again to arrest Pantling, the Soldiers’ Councils called a strike, which was completely solid. The guards were replaced by pickets

At another camp in nearby Vendreux, over 2,000 men struck in solidarity. Then they marched to the Calais camp. Following a mass meeting the combined forces marched behind brass bands towards army headquarters. The headquarters were rapidly surrounded by 4,000 mutineers, who demanded the release of Private Pantling, which was acceded to.

The next day, some 20,000 men had joined the mutiny. French troops fraternised as a total embargo was placed upon the movement of British military traffic by train. This stoppage led to 5,000 infantrymen due to return home, joining the demand for immediate demobilisation.

General Julian Byng attempted to call for reinforcements, but they proved equally unreliable in face of the growing mutiny.

The strike, coordinated by the strike committee, was solid. The committee took the title of “The Calais Soldiers' and Sailors' Association.” It was organised on democratic lines, where each group elected a delegate to the Camp Committee, which in turn sent delegates to the Central Area Committee. They ran everything and issued daily orders from the occupied Headquarters.

Soldiers at Dunkirk were also ready to come out. Even the women of the Queen Mary's Army Auxiliary came out in solidarity with the Calais strike. The Calais Area Soldiers' and Sailors' Association continued to meet and applied for representation on the newly formed Soldiers', Sailors' and Airmen's Union. The union continued to grow for five months, claiming 49 branches, including Calais and Boulogne, by the beginning of April. The Calais mutiny, which had clearly have developed a revolutionary character.

On January 30 1919, General Byng finally surrounded Calais with troops equipped with armoured cars and machine guns. However, fraternisation continued between the forces. General Haig wanted the leaders of the Calais mutiny shot. However, the government feared provoking an explosion. There was no soldier punished for the incident despite the fact that mutiny was punishable by death.

The only reprisals were in the navy, where one sailor was sentenced to two years’ hard labour, three to one year and three to ninety days’ detention for refusing to go to sea, taking over the patrol vessel HMS Kilbride at Milford Haven, hauling down the white ensign and hoisting the red flag instead.

The nerves of the General Staff were clearly affected by the revolts. “We are sitting on top of a mine which may go up at any moment”, stated General Wilson to Churchill. Churchill himself feared that the unrest would spread and that “widespread disobedience would encourage Bolshevism in Britain.”

So concerned, Lloyd George rushed back from Paris on 8 February. As he arrived, some 3,000 soldiers from different camps were marching from Victoria Station to Whitehall in protest at food and sleeping arrangements. They were stopped at Horse Guard Parade by a battalion of Grenadier Guards with fixed bayonets, who shepherded them to as far as near Wellington barracks.

Britain was lo in the grip of a massive strike wave, involving miners, engineers, transport workers, and even the police.

Churchill’s dream of war with Soviet Russia was being dashed. Direct military involvement was becoming less possible. Churchill fell back on the next best thing. Britain, he said, could help smash the “foul baboonery of Bolshevism” by sending munitions and volunteers. Within a year, even this hope was doomed as dockworkers re fused to load munitions.

The “free” British press, still under war censorship, clamped down on any reports of unrest. As The Times stated: “We re asked to publish, but have no intention of publishing, a great many letters on the subject of demobilisation which show a deplorable lack of responsibility on the part of writers… fanning an agitation which is already mischievous and may become dangerous… These demonstrations by soldiers have gone far enough.”

International solidarity had saved the Russian Revolution. The European powers, including Britain, were in the grip of a revolutionary storm. Unfortunately, there was no Bolshevik Party as in Russia to guide it to success.