Details
our correspondent in Cuba
22 February 2007

Share
Tweet
In presenting his book on the history of the Bolshevik party, Alan Woods was able to set the record straight on what really happened in the Russian Revolution, in particular emphasising the role of Leon Trotsky. The fact that Trotsky’s books on sale at the stand of the Frederick Engels Foundation were sold, once again, is an indication that on the island there is a thirst for the genuine ideas of Marxism. 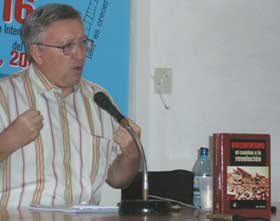 Friday 16 saw the third and last book launch of the Frederick Engels Foundation at the 2007 Havana Book Fair. In a room full to capacity, Alan Woods presented his work Bolshevism: the road to revolution. In less than an hour Alan covered a vast range of subjects. "We must recover the real traditions of Bolshevism," said Alan, "from under a heap of lies and distortions created by the bourgeoisie, but also by the Stalinists".

One of the ideas he stressed was the democratic nature of the Bolshevik party, which was always full of vibrant debates that prepared it for revolutionary action. This sort of internal democracy was absolutely necessary so that the party would learn from its own mistakes. "The idea that the Bolshevik party developed through an always onward march without mistakes, until the taking of power, is a Stalinist myth from which nobody can learn anything". 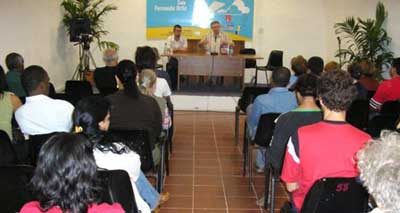 These traditions have to be recovered for the new generation of revolutionary fighters that is emerging, particularly in Latin America. In this sense, Bolshevism is not so much a book about history but a tool for the building of the revolutionary party today. In fact, Alan said, "the revolutionary party is first of all ideas, methods and traditions, the historical memory of the working class, and only later an apparatus to carry these into practice".

The audience included many youth, veteran Communist militants, university lecturers, a former Cuban ambassador, Aurelio Alonso (member of the board of Pensamiento Crítico in the 1960s), veteran Cuban Trotskyists and foreign students from a number of Latin American countries. For many of them this was the first time they had heard an explanation of the real role played by Trotsky in the Russian Revolution, particularly, a detailed account of the different positions that existed within the Russian Social Democracy in relation to the idea of Permanent Revolution (i.e. the tasks and leading forces of the Russian Revolution), and how Lenin and Trotsky had fundamental agreement on this after Lenin published his "April Theses".

The meeting was a real success and more than 40 copies of the book were sold. This was in line with the overall success of the Frederick Engels Foundation at the Havana Book Fair. This year we sold 30% more books and pamphlets than the year before, which reveals the enormous interest that exists for the ideas of revolutionary Marxism on the island. 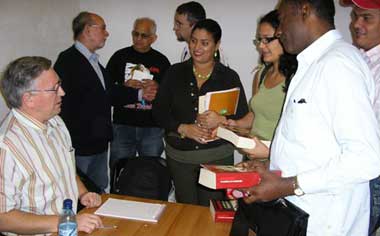 Once again the best selling titles were those by Trotsky or those dealing with the collapse of Stalinism in the Soviet Union. We sold out of copies of both Revolution Betrayed and Permanent Revolution by Trotsky, of "Reason in Revolt" (which was published last year in a Cuban edition), of Ted Grant's work on Russia, of Lenin and Trotsky what they really stood for, and Alan's pamphlets on Trotsky and Stalin amongst others. Trotsky posters and T-Shirts also sold out, showing once more the enormous interest there is for the ideas and the figure of Leon Trotsky, which was suppressed for so many years. A veteran member of the Cuban Communist Party told us that he was no longer prepared to accept being told what to think and that he wanted to read Trotsky by himself. Venezuela and the Bolivarian Revolution was another focus of attraction and we also sold out of copies of Alan Woods' The Venezuelan Revolution: a Marxist analysis.

As a result of our presence at the Book Fair, the Frederick Engels Foundation established links with a number of Cuban institutions and we made donations of books and material to the Journalism Faculty of the University of Havana, the Philosophy Department, and Editora Politica (the PCC Central Committee publishing house), amongst others. A donation was also made to the Catedra Haydée Santamaria, a group of youth who are holding regular political discussions and activities, and who are about to open a public library in Havana.

We were also invited to the High Institute of International Relations (ISRI) where Alan Woods discussed with a group of Venezuelan students who are following a course there about the fall of the Soviet Union and the current situation in Russia, and we also spoke at the Journalism Faculty on the subject of the Hands Off Venezuela campaign and the struggle for nationalisation under workers' control at Sanitarios Maracay.

All in all this was a great success which we hope to repeat next year.