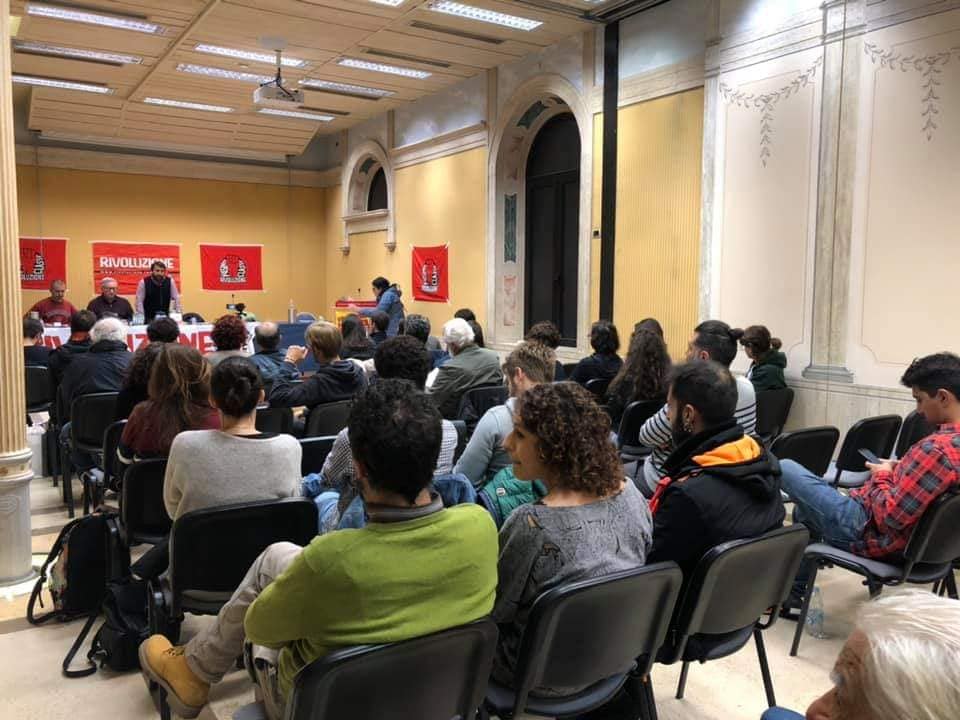 Alan Woods’ tour of Italy has concluded with two hugely successful meetings in Naples and Rome (preceded by appearances in Milan and Bologna). The tour (entitled “Revolution for the future: from the History of Bolshevism to the revolutions of tomorrow”) was organised by Sinistra Classe Revolution: the Italian section of the International Marxist Tendency.

Over 70 people attended the meeting in Naples on 7 November at the Città del Sole. The audience was made up of youth alongside more-experienced activists, who all participated attentively and enthusiastically over the course of three hours.

The discussion was introduced by Marzia Ippolito of Sinistra Classe Revolution, who explained the importance of the topic under discussion in relation to the particular period we are in. At an international level, we are witnessing numerous insurrectionary movements that express the accumulated anger of 10 years of crisis and worsening of living conditions for workers and youth. The mass mobilisations in Ecuador, Chile, Haiti, Iraq, Lebanon, etc. do not occur in isolation. These revolts, as well as the mobilisations of the yellow vests in France and the new wave of the Catalan independence struggle, demonstrate the exceptional nature of the times in which we live. They represent the end of the status quo. Indeed, today, the status quo is perceived as the problem!

The struggles of these past several weeks demonstrate a profound and rapid change of consciousness. A trait they share in common is a very strong radicalism, which has withstood and confronted the most ferocious repression.

Marzia then introduced Alan, and briefly highlighted the latest translations of his works into Italian: The Ideas of Karl Marx, and above all The History of Bolshevism, of which the second volume has just been published.

Alan then took the floor and outlined the history of the Russian Revolution, noting the fact that the meeting was taking place precisely on the revolution’s 102nd anniversary.

For nearly two hours [including translation], Alan reconstructed the decisive steps in the development of the political struggle in Russia, starting with the exceptional conditions of repression under the tsarist regime and the limited force of the working class. These conditions would have made a socialist revolution seem impossible. But it was possible, as explained by Alan, thanks to the Bolshevik Party and the role played by two exceptional leaders: Lenin and Trotsky. 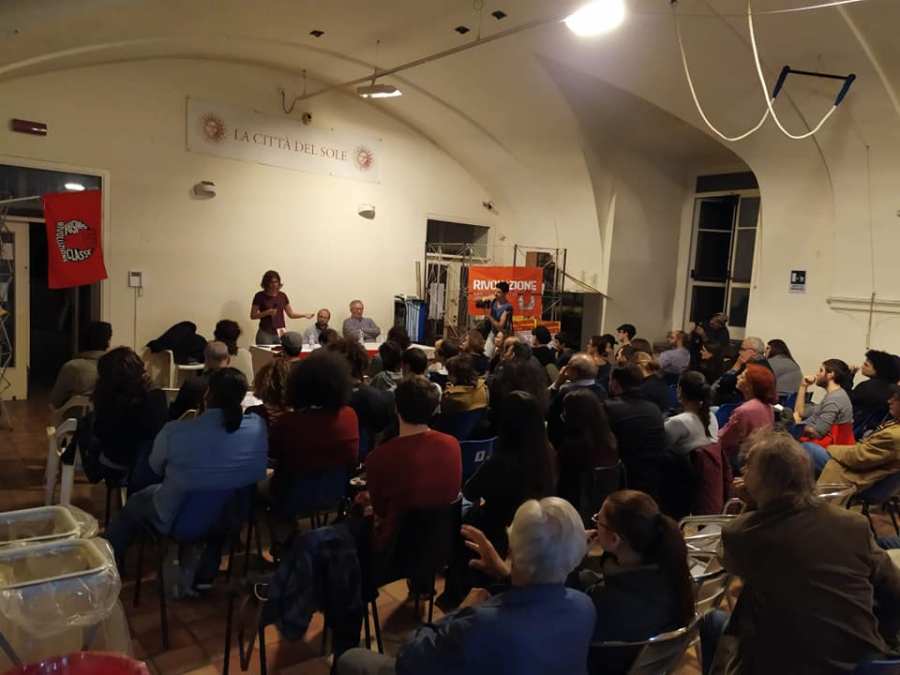 Over 70 people attended the meeting in Naples on 7 November at the Città del Sole / Image: SCR

In the limited time he had available, Alan effectively reconstructed the history of the Bolshevik Party, which knows no comparisons for its ability to develop from a small and insignificant group to a party of millions, capable of taking power. As Alan explained, this is the fundamental theme of his book, and also of his Italian tour.

In his account, Alan emphasised the beginnings of the party, and the role of young people and intellectuals in the embryonic phase of its construction. He also spoke of the stages through which the Bolsheviks had to pass on their road to power: the emergence of the soviets and the 1905 revolution, the hard period of reaction following the defeat of that revolution, the party’s isolation following the disaster produced by the social democracy voting for war credits in August 1914, and finally the exceptional year of 1917, with the revolutions of February and later October.

After Alan spoke, several comrades intervened to emphasise in particular the role of young people in today's revolutionary processes, but also the importance of studying the experience of the Bolsheviks to equip us with the theoretical tools necessary to intervene in the mobilisations taking place. Both Alan and the comrades who spoke emphasised that it is inevitable that, even in Italy, processes similar to what we are seeing today in other countries will take place.

Other comrades asked questions, in particular on the concept of the party, and the role and importance of leadership. Still others raised questions about the degeneration of the revolution and the risks inherent in a revolutionary process, as took place in Russia. 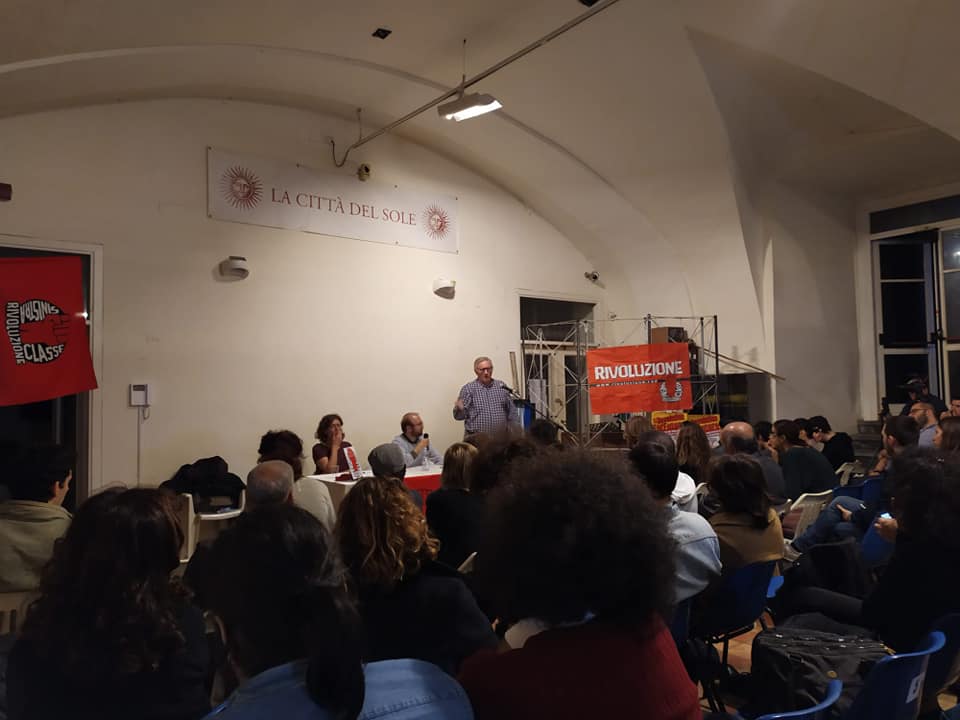 In his concluding remarks, Alan focused on criticising Stalinism, countering the idea that it was a continuation of Bolshevism. In reality, Stalin oversaw the destruction of Lenin's party, and there is a river of blood separating the two men, as evidenced by the physical extermination of the cadres and leaders who had spearheaded the revolution in 1917.

The great success of the meeting and the enormous enthusiasm for revolutionary theory was materially demonstrated by the contributions collected in support of Alan's travel expenses in Italy, and especially in the sale of literature. Almost 250 euros worth of material was sold, including several of Alan’s books, but also magazines and brochures produced by our tendency.

This result not only showcased the enthusiasm produced by the meeting, but also how a good discussion can create an appetite for reading Marxist theory: an essential weapon for tomorrow's revolutions!

The following day, over 100 people braved torrential rain to attend Alan’s meeting at the Cavour Congress Centre in Rome. The meeting saw the participation of metalworker shop stewards, local council workers, various other political and trade union activists, and above all young people.

The discussion was introduced by Jacopo Renda of Sinistra Class Revolution Rome who explained how the tour was conceived with the title #revolutionforfuture in the days following the global climate strike which, from Rome to New York, brought millions of young people onto the streets worldwide.

A new generation is breaking onto the political scene, calling for a profound change in the system that goes far beyond the pale reformism of the leaders of the Fridays For Future. By contrast to their methods, the revolutionary movements breaking out in Lebanon, Chile, Iraq, Ecuador and Catalonia have employed general strikes, the occupation of the corrupt halls of parliament, and the convocation of popular assemblies that resemble the soviets of old.

Before handing over to Alan, Jacopo focused on how these events emphasise the need for a revolutionary leadership; and how the experience of Bolshevism, analysed in depth in Alan’s book, provides essential lessons for the revolutions of tomorrow.

Alan took the floor to speak for over two hours [including translation]. As in Rome, he focused on the history of the Russian Revolution and the Bolshevik Party. He explained how the early days of building the Bolshevik Party involved patient work, initially under the repressive yoke of tsarism and then in the midst of the massacre of the First World War. It was the Bolsheviks’ firmness of ideas and flexibility in tactics that sustained them through all difficulties. 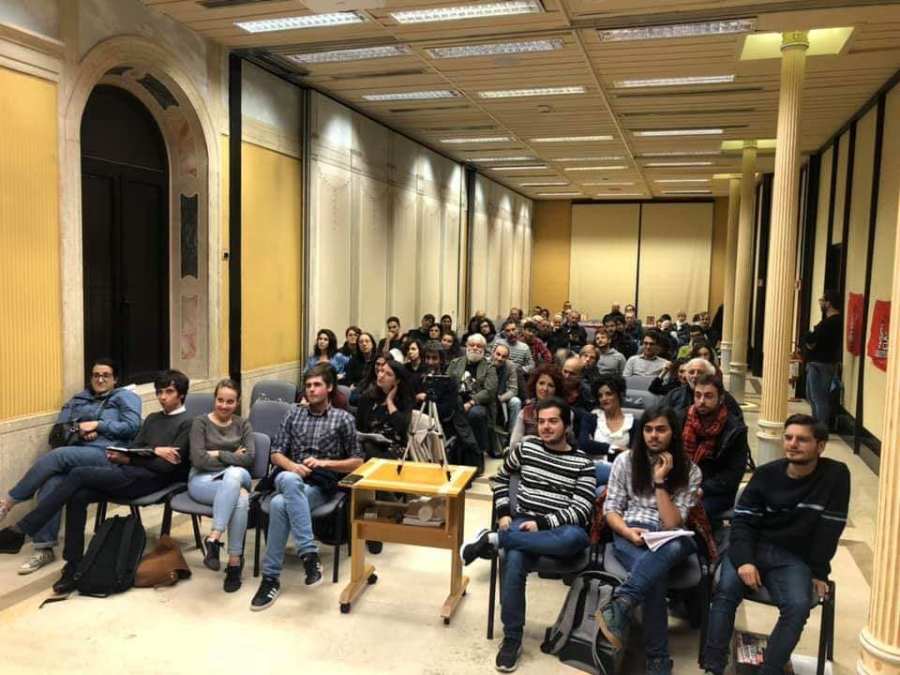 Alan demonstrated, through a series of historical examples, how the present situation is not all that different from that in which the Bolsheviks operated. He stressed the great faith Marxists have in the working class, and how the class needs a programme, method and above all an organisation for it to be more than mere raw materials for exploitation.

His speech was received with great attention by all participants and was followed by some questions and interventions. One young comrade focused on the processes in the Middle East, in particular in Lebanon, which have seen ethnic and religious divisions cut across by shared class interests. Another cited the role of young people in Catalonia, and above all in Chile, where they are the most radical and courageous layer of the movement, challenging the repression of the bourgeois state and resisting the compromising attitudes of their leadership.

Summing up, Alan focused on the tasks of revolutionaries in the present epoch, on how to understand the revolutionary processes erupting today, and on the role of young people and women in revolutionary history: from France to Russia. These remarks aroused enormous enthusiasm among those present.

This enthusiasm was reflected in the sale of political material, with over 300 euros worth of pamphlets and books sold (including 20 books by Alan himself) and 412 euros collected to cover his travel costs.

Thus, Alan’s Italian tour ended on a resoundingly positive note. Forward to the revolutions of tomorrow!