The traditional “Pfingstseminar” of the Der Funke Marxist tendency in Austria took place recently over a long weekend full of political discussions and self-organised cultural and sports activities in the best traditions of international solidarity. 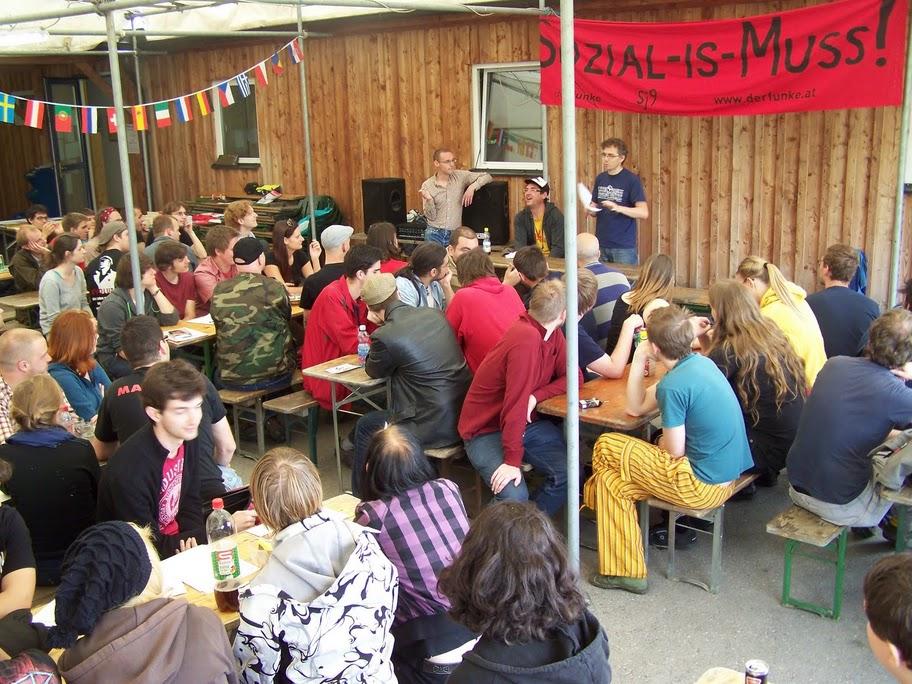 This year’s Pfingstseminar was organized in the aftermath of the Arab revolution. As a motto for the seminar we chose “Fight like an Egyptian!” However, already in the weeks leading up to the seminar it was becoming clear that the revolutionary wave, which had begun in Tunisia and Egypt, was reaching Southern Europe. Basing ourselves on this perspective we decided to change the programme and to start with a plenary discussion on the protest movements in Spain and Greece.

In his opening remarks Gernot Trausmuth, the editor of Der Funke, explained that it was the task of Marxists to report in their countries about the struggles taking place in the Arab world as well as in Greece, Spain, Portugal etc., to organize solidarity with the revolutionary movements in these countries and to outline a Marxist perspective to the most advanced revolutionary activists and, last but not least, to prepare ourselves on the basis of these experiences for the future revolutionary movements in our own countries.

The Marxists have been explaining for years that we are living in a period of economic, social and political instability on a global scale and that this would lead to revolutionary movements. For a long time this seemed to be a very abstract idea for many people (and even for some revolutionary activists), but because of the events in the Arab world in the last few months this perspective has became a concrete fact that everyone can see.

In his opening speech Jorge Martin from the IMT then outlined in detail the economic, social and political conditions that led to the “May 15” movement in Spain. It developed as a reaction against the deep economic crisis, the policy of cuts and the disastrous role of the “socialist” government and the trade union leadership who are orientating towards social partnership, supporting the line of the government.

Just as many activists of this movement in Spain were inspired by the events in Tunis and Cairo, this movement in the streets of cities and towns all over Spain had a tremendous impact on the movement in Greece. All these movements are part of a worldwide process rooted in the crisis of capitalism. The call for “Real Democracy Now” which we can her echoing from Cairo to Madrid to Athens is nothing else then the aspiration to put an end to the dictatorship of the banks and the capitalist monopolies which dominate our lives.

In the discussion several comrades emphasised the question of the programme that is needed to fight against cuts and public debt. Emanuel Tomaselli in his intervention referred to the declaration of the Greek Municipal Workers’ Union which is calling for a political general strike against the policy of the government and the “Troika”. This is precisely what is required and is also a key element of the perspective the Greek Marxists have been trying to explain in Syntagma Square.

In this plenary discussion it became clear how important it is to be part of an international tendency. In this epoch of the crisis of world capitalism, this is the precondition for developing a correct perspective for the revolutionary struggle.

In the afternoon the first workshops started with discussions on the Arab revolution, the question of ecology and capitalism, etc. We also had a debate with Tina Tauß (the national chair of the Young Generation in the SPÖ), Michi Gogola (YS Schwechat) and Gottfried Pingitzer (Association of Democratic Soldiers) on the planned abolition of compulsory military service for young men. Tina Tauß defended the point of view of the SPÖ which wants to establish a professional army. She was strongly criticised for surrendering to this militarist position which plays into the hands of those forces who want to improve the ability of the Austrian army to serve the interests of imperialism. The comrades of the Der Funke Tendency, however, did not reduce their criticisms to simply defending conscription, but explained that it is necessary to have a clear class point of view on the bourgeois state and its institutions. Only on this basis can we avoid pacifist confusion on this important question, as is the case with the national leadership of the Socialist Youth.

In the evening we had a bonfire and sang revolutionary workers’ songs.

On the second day the political programme continued with a workshop on the basics of Marxism, the struggle against racism and on the war in Libya. For the first time we also had a discussion about the struggle against the oppression of homosexuals. The lead-off was given by comrade Harald Stadler, a supporter of “Der Funke” and activist of the initiative “Socialdemocracy and Homosexuality” in Salzburg. On the basis of this discussion we will produce a document on this question.

In the afternoon there were a whole series of highly interesting debates. A lot of comrades showed an interest in the workshop of the comrades from Serbia, Bosnia and Slovakia on the perspectives of the class struggle in Eastern Europe and the Balkans. The results of this debate will be published soon as a draft document for further discussion in the IMT and with the comrades and sympathizers of our tendency in this region. The seminar was also a good opportunity to deepen our links with the group “Mladna Bosna-Jost” from Sarajevo.

In another workshop we worked on programme against youth unemployment and the exploitation of apprentices. There were several young workers, apprentices and unemployed, at the seminar who described their experiences and problems in finding jobs, how they are exploited, etc. Building on these reports, which gave a very deep insight into the living and working conditions of young workers, we are going to write up a Marxist programme which will be published soon. In this workshop it was shown that the Der Funke Tendency has managed to develop important roots among working class youth, especially in Vorarlberg where the Marxists are leading the regional Socialist Youth.

Another highlight was the discussion with Malk Walner, the national secretary of the Socialist Youth on the question of the tasks of socialists in the struggle against cuts. In the past few weeks the Socialist Youth has been shaken by debates over the role of a leading YS-member who has voted in favour of cuts in his position as a regional councillor in Styria. In the course of this discussion the Marxists not only repeated their criticism of this fatal break with the best traditions of the YS and the decisions of its last congress in relation to this question, but also explained that this flows directly from the wrong understanding of the role of the Social Democracy and the absence of any clear perspective on the capitalist crisis on the part of the left reformists in the YS. Furthermore Martin Wieland, supporter of the Der Funke Tendency and trade union representative in a hospital in Linz, drew a balance-sheet of the struggle against the latest cuts in the health sector in Upper Austria and the role of the trade union leadership which has not been prepared to lead a proper struggle against such attacks. The experience of the protest movements against cuts in Styria and in Upper Austria highlight very well the need to build a strong Marxist tendency within the organized labour movement.

The “Pfingstseminar”, however, is more than just political discussions. This year we had a series of sportive activities. The comrades from Vorarlberg started early in the morning with running and swimming in the nearby lake. On Sunday afternoon there was a soccer tournament. The best team were the “Ballschewiki” from Vienna who won all their matches. But the winner of everyone’s hearts was the international team with comrades from Switzerland, Serbia, Germany and Bosnia.

The absolute highlight was the traditional quiz “Who will be the best revolutionary” with a new team of show masters. Every team had to answer 15 questions showing their knowledge and creativity. The winning team was composed of comrades from Vienna and Switzerland. For the first time the winner got a challenge cup.

It also has to be said that a seminar of such size can only be a successful if not only the official programme but also all the organizational work behind the scenes is carried out in a proper way. All cooking, cleaning, translating, serving at the bar, the barbecue, not to forget the childcare (this time for 10 children from 1 to 11 years of age) was organised by all the participants. This form of self-organisation is second to none in any political seminar of the left in Austria.

This seminar lays the political base for strengthening and developing the work of the Marxist tendency in Austria and internationally on a series of questions. Moreover, in this weekend’s activity we demonstrated in practice what international solidarity really means!