Around 300 people turned up at the public launch of Pakistan's other story - The 1968-69 Revolution in Quetta, the capital of the province of Baluchistan in Pakistan, to listen to several speakers highlighting the tumultuous events of 1968 in Pakistan.

Geographically Baluchistan is the largest province of Pakistan and it is also rich in mineral resources, and yet it is the most impoverished region of the country. The launching ceremony of comrade Lal Khan's new book Pakistan's other story was held at the Baluchistan Institute of Culture in Quetta, the capital of Baluchistan, on February 7. There were about three hundred present to attend the ceremony. The meeting was chaired by comrade Nazar Mengal the national general secretary of the PTUDC. He began by introducing the book and its author. 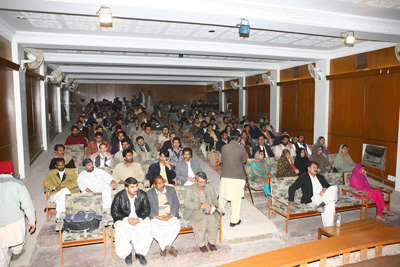 The first speaker called upon was comrade Shakila Baloch, a 19 year old female engineering student. She explained the lessons of the 1968-69 revolution and stressed the importance of revolutionary socialism to avert the impending barbarism. She asserted that the crisis ridden capitalist system can only aggravate the miseries of the oppressed. Shakila said that this book brings to the new generation of women, workers and youth the tremendous potential of the working classes to overthrow the system and transform society.

The next speaker was Lala Sultan of the All-Pakistan Federation of Labour. He stressed the need for the workers and trade union activists to unite to attain their demands. He was followed the comrade Nadir Afaq, general secretary of the Baluchistan People's Student Federation. He spoke about the worldwide ferment of forty years ago. From France to the USA and from Mexico to Italy the masses had risen up to break the shackles of capitalist slavery. He stressed that had there been a Bolshevik party, the socialist revolution would have been entirely possible.

The next speaker was Maroof Azad of the MMM (United Labour Front) who called upon all the left forces to unite for a socialist change. The main guest speaker was Hasil Khan Bizenjo, a renowned left leader from Baluchistan and the senior vice-president of the National Party. He appealed to the new generation to learn from the experiences of the 1968-69 revolution. He stressed that we urgently need to build a strong revolutionary force to face up to the challenges ahead and be in a position to lead the next upsurge to a revolutionary victory.

Comrade Hasil Bizenjo warned of the threat of talibanisation of Quetta and Baluchistan. He lashed out at the imperialist aggression and said that for about three hundred years there has been a continuous imperialist aggression in Afghanistan and the region. He added that Marx, Engels, Lenin and Trotsky were great leaders and teachers of the working class of the world, but it is not enough to learn them off by heart and what is required is to put their ideas into practise and creatively develop them. Comrade Hasil Bizenjo praised the book and called it a guideline to action rather than a narration of historical events.

The last speaker was the author of the book, comrade Lal Khan. He explained the reasons for embarking on this work at this historical juncture. Lal Khan said that the historians of the ruling class had tried to remove this revolutionary uprising from the annals of the country's history. Although Pakistan's history is 62 years long, the real history of the people of Pakistan is concentrated in 139 days from November 6, 1968 to March 25, 1969 when the power had been taken out of the hands of the echelons of the state and was in the streets, factories and the villages.

Lal Khan explained that all ethics, every attitude and the consciousness of the masses change when they enter into a revolutionary upheaval to take hold of their destiny. The awareness of their social and economic power in society gives the toiling masses a sense of strength, confidence and valour that they never experience in ordinary times. The present situation is so horrendous that it is becoming more and more intolerable for the masses. Apart from the doom and gloom of the liberal intellectuals there is a serious perspective of a revolutionary movement that would be on a higher plane than that of 1968-69.

The main objective of this book is to arm the new generation of the youth and the working classes with the confidence, theory, strategy and method that are required to lead the inevitable upsurge in the class struggle to a socialist victory, and put an end to the horrors of capitalist drudgery and brutality once and for all.

At the end there was a standing ovation that lasted for several minutes. In the end there was a financial appeal by comrade Nisar in which more than Rs.7000 were raised that covered the cost of the event. At the bookstall 16 books along with the paper and other material was sold. This event gave a renewed confidence to the Marxists in Baluchistan who have been building the forces of revolutionary Marxism steadily for more than two decades in the midst of an insurgency and terrible economic and social conditions. Their resolve to become a mass revolutionary force is firmer today as never before.