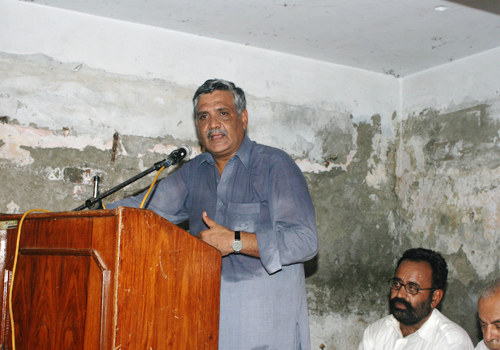 The inauguration was held on October 3 in the PPP offices in D.G. Khan at Khetran Plaza near Traffic Chowk. Almost 250 workers, peasants and students attended the ceremony. D.G.Khan Division was the worst hit by the recent floods. The cities of Jampur and Kot Addu were completely submerged in flood waters while hundreds of villages and towns were destroyed. 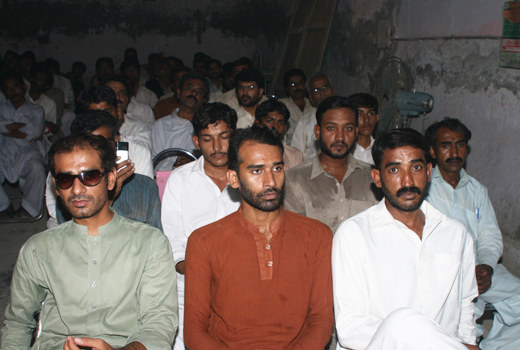 The comrades of the PTUDC in this region, undeterred by this catastrophe, carried on their revolutionary work under the banner of the Revolutionary Flood Relief & Protest Campaign. Many medical and relief camps were organised along with protests in different cities of this Division to raise the voice of the flood affected people against the feudal, landlords and multinational companies who were responsible for making this tragedy far worse than it could otherwise have been.

Now in the midst of this huge tragedy they organised this activity to explain the real cause of dilapidated infrastructure and impotent State which proved incapable of dealing with these flood waters and why the flood of misery, poverty and unemployment was unleashed on the already impoverished masses. People had come from Layyah, Muzzafargarh, Rajanpur, Jampur, Muhammadpur, Fazilpur Kot Addu, Chowk Azam, Alipur and as far as Rojhan Jamali to attend this book inauguration.

Comrade Rauf Lund who is the General Secretary of the PPP in the District of Rajanpur was the Stage Secretary. The meeting started with comrade Abdul Karim Mohsin reciting his poem. He is a famous Seraiki language poet and his own home was destroyed in these floods.

After that Behram Buzdar, city president of the PPP in D.G. Khan, introduced the author of the book comrade Lal Khan and invited him onto the stage. He recounted to the audience his experience in the struggles during and after the Zia ul Haq dictatorship. He also explained the contents of the book and how the current leadership of the PPP has betrayed the working class by implementing anti-workers policies, and said "I may be expelled from the party for criticising the current leadership but I am ready to sacrifice anything for the cause of socialist revolution".

Comrade Paras Jan, central Information Secretary of the PTUDC, gave an introduction about the book and its importance for the working class. He said that "Pakistan's Other Story" is not just another history book but it contains very important lessons from the struggle of the workers, peasants and students in the 1968/69 revolution. He also explained how the bourgeois media tries to censor the real struggles of the working class. While talking to audience he also explained that the whole of history is based on the struggle between the ruling and working classes. He also shed some light on the events of the 1968/69 revolution in which the working class took control of the factories and the peasants took over the land.

Comrade Riaz Hussain Baloch, president of the PTUDC, also shared his thoughts about the book. He said that the book also explains about the bloody partition of the subcontinent and the movements of the working class before partition. He also said that the revolution of 1968/69 could not be completed by the working class, because there was no Bolshevik organisation present at that time, but if the working class starts a movement now, they have with them this book and a revolutionary organisation through which they can learn from the mistakes of the past and they will complete the socialist revolution.

Comrade Zohaib Butt, President PSF Punjab, shared with the people how the ruling class enjoys their luxurious lifestyle even in the darkest days of the working class. He said that the flood crisis once again had exposed their character. He said we need to have correct analysis of history in the coming period, and that this book explains very well the power that the working class have. He also said that today we don't need “social democracy” but true economic democracy and that is only possible through socialist revolution.

Sardar Aalam Khetran Khan, Secretary General PPP in the D.G.Khan District, said that he has learnt a lot from this book. He said that "Mr. Bhutto understood very late that conciliation between the ruling and ruled classes is not possible". He also said that I am not a member of the PPP which is in this current government but a member of the PPP that is present in this hall.

Dr Lal Khan said the reason for writing this book was to let the people know that history does not belong to war-mongers, kings and the ruling classes but to the working class as well. He said that he believes that this is the class that can and should take power now to build a socialist society as capitalism has nothing else to give but wars, poverty, unemployment etc.

While talking about the current flood crisis he said that politicians are trying to exploit the suffering of the people for their own political careers, but the people do not believe them anymore. He said that the true character of the current leadership of the PPP is being exposed in front of their members and they are looking for an alternative leadership inside the PPP.

Those leaders which still adhere to the founding documents of the PPP should come forward and explain the founding manifesto written by Z.A. Bhutto in which it is said that “the ultimate objective of the party’s policy is to attain a classless society which is only possible through a socialist revolution in our time.”

He said that the workers and peasants of Pakistan will learn fast from these tragic experiences and will take the revenge for all this misery and poverty through a socialist revolution.