Share
Tweet
This coming weekend the El Salvadorean BPJ (Peoples' Youth Block) is holding its third congress, where affiliation of the organisation to the IMT will be ratified. Marxists all over the world welcome this new addition to the forces of the International Marxist Tendency at a crucial moment in the history of El Salvador.

The 1929 crisis of capitalism led to a sharp decline in prices of coffee and a deep recession in El Salvador. As a result the working class and the peasantry became radicalised and the Salvadorean Communist Party (PCS) was founded, having as one of its main leaders Farabundo Martí. Barely two years later the PCS was already leading a revolutionary uprising, but the inexperience of the young Communist Party led this attempt to a defeat. The ruling class took its revenge massacring 30,000 workers and peasants, including Farabundo Martí, in a three-month campaign of repression. These events left a deep scar in the country's history. 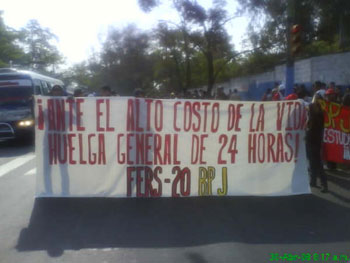 Unfortunately, by the time the PCS was created, Russia had already undergone a bureaucratic counter-revolution which had destroyed workers' democracy. The bureaucracy ended up assassinating the Bolshevik old guard, drawing a line of blood which separated Stalinism from Bolshevism. Stalinism is the antithesis of Marxism. The bureaucratisation of the Russian workers' state and of the Bolshevik party spread throughout the Communist International, where Stalin imposed the old Menshevik theory of the two-stages, which proposes the strategy of alliances with the so-called progressive bourgeoisie. Lenin had always fought against such ideas, defending the need for class independence of the working class from the capitalists. Thus, the version of Marxism that arrived in El Salvador was already distorted.

Brutal repression on the part of the different military governments led to the conclusion that socialist revolution had to be carried out through armed struggle specifically through a guerrilla war. This idea was defended even by the main workers' leaders and some pseudo-Trotskyist groups, which instead of opposing this strategy from a Marxist point of view, supported these methods. In Russia at the beginning of the 20th century there was the most repressive of regimes, but Marxism emerged in a struggle against the methods of the Russian populists, the Narodniks, which advocated methods very close to those of guerrilla war. The peasantry was in proportion much larger in Russia than in El Salvador, but that did not prevent the working class, with a correct leadership, from becoming the vanguard of the revolution.

Despite harsh repression, the masses entered the movement once again, with the powerful movement of the working class which carried out general strike after general strike in 1980 and the largest ever demonstration in the history of the country on January 22, led by the Mass Revolutionary Coordination (CRM). The CRM was the result of the unification of the movement of the workers in a period of revolutionary upheaval. The main mass organisations were pushed towards unity, including the FAPU, BPR, LP-28, MLN, together with the electoral front of the PCS (UDN). This mood forced the guerrilla organisations which led these mass organisations to also unite, forming the FMLN, which is the legitimate product of the revolutionary struggle and the unity of the workers' movement. 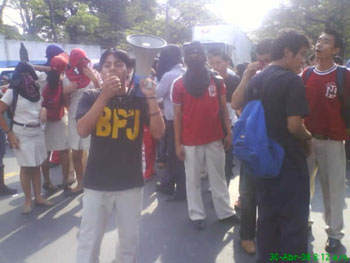 In every single one of the guerrilla organisations (ERP, FPL, FARN, FAL and PRTC) we can find examples of heroism. Amongst their members one can find countless revolutionary activists who gave their lives fighting for socialism. We must claim this heritage of struggle and sacrifice for the building of a strong Marxist organisation which should learn from the mistakes of the past and orientates firmly towards the working class, not the peasant guerrillas, since, as Marx said: "the emancipation of the working class can only be the task of the workers themselves." We add that any attempt to substitute the role of the working class will always end up in bureaucratisation, as we can see clearly in the history of El Salvador.

The ruling class was not able to defeat the guerrillas, but the FMLN did not take power. With the collapse of Stalinism in the Soviet Union and Eastern Europe and the defeat of Sandinismo in Nicaragua, the armed conflict in El Salvador, which lasted for more than a decade, ended up with the signing in 1992 of peace agreements that did not solve any of the fundamental problems of the masses. It was just a pause in the conflict between the classes.

It was at that time that a group of young people who were members of the FMLN launched the Peoples' Youth Block, BPJ. Their first public appearance was in one of the white marches, when 7 youth carried a banner which read "Insurrection now!" At that time nobody believed in the BPJ, some FMLN bureaucrats even laughed at the small contingent. But the BPJ went on to become the strongest youth organisation in El Salvador with a steadfast revolutionary spirit. In the struggle against privatisation it played a key role.

In the history of the BPJ a number of mistakes have been made, including some of an ultra-left nature. Could it have been otherwise? This is the inheritance left by the FMLN leadership which never paid attention to the political education of the new generation. In this striving to carry the socialist revolution forward in El Salvador, the BPJ is becoming a genuine Marxist organisation. As part of this process the BPJ opened up a dialogue with the International Marxist Tendency and is now in the process of joining, because we are clear that the socialist revolution in El Salvador can only be victorious as part of the struggle for world socialism.

On June 7 and 8, the third congress of the BPJ will be an important step forward in the integration of the BPJ into the IMT, and Marxists all over the world will be following its development. Correct ideas will always win, and genuine Marxism will cut across the fog of lies and slanders of the ruling class, the reformists, Stalinists and the sectarians. Leon Trotsky was heavily slandered, but he kept the genuine ideas, methods and traditions of Marxism alive in extremely difficult conditions, paying with his life for this attempt. After the death of Leon Trotsky, Ted Grant, founder of the IMT, continued this task.

The Stalinists dominated the powerful Communist International and led strong (deformed) workers' states, but today, the Soviet Union has collapsed and in Latin America a new revolutionary wave is posing the question of socialism. Even leading figures like Hugo Chávez are recommending reading Trotsky, whose ideas are also having an impact in Cuba.

The BPJ was born in the ranks of the FMLN amongst a layer of youth who joined the party after the peace agreements searching for a way to struggle for socialism. Today the old revolutionary organisations which set up the FMLN have disappeared, but it is necessary for a new generation of revolutionaries to learn from the successes and the mistakes of the past to be able to carry out the socialist revolution in El Salvador. We are not enemies of the FMLN, the members of the BPJ in every local committee, youth committee and the other structures of the part are self-sacrificing and loyal members, we defend the FMLN against the attacks of the ruling class while at the same time explaining our Marxist ideas. We fight for a democratic FMLN where no comrade would be subject to bureaucratic measures just for expressing a revolutionary point of view, we demand from the leadership a revolutionary policy and we will fight to bring the FMLN to power in 2009 and for it to implement a socialist programme.

Today we are witnessing the organic crisis of capitalism, the masses are tired and the FMLN has an historic chance to come to power for the first time. In the great revolutionary events that will shake the FMLN from top to bottom we are convinced that its rank and file will be in the forefront of the struggle of the working class and so will we. The ideas and methods of genuine Marxism adopted by the BPJ in joining the IMT will have a major impact in the revolutionary history of El Salvador.