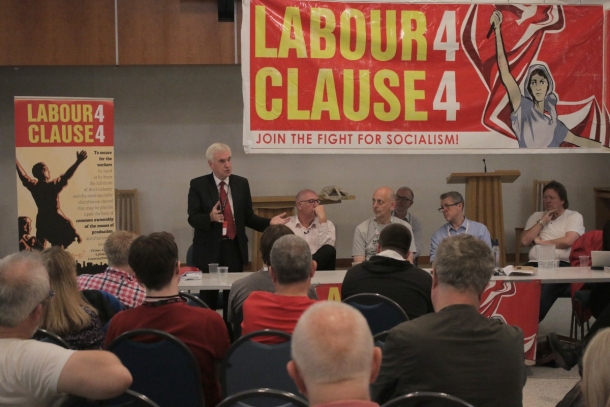 The British Labour Party has been holding its national conference over the past several days. At a Labour4Clause4 fringe meeting on Monday evening, a packed room of grassroots Labour activists heard from Labour Chancellor of the Exchequer, John McDonnell and leading trade unionists, who speakers pledged their support for the restoration of Clause 4 and Labour's commitment to socialist policies.

The old Clause 4 – Labour’s commitment to the socialist transformation of society – was an ever-present spectre at this year’s Labour conference.

Clause 4 has not been debated at Labour conference since 1995 – and only then to bury it. Now, almost 25 years later, it has come back with a vengeance.

On the very first day of this year’s Labour conference, an attempt to restore the original Clause 4 received the backing of nearly two-thirds of local party delegates. Speakers moving this rule change motion received a standing ovation. This is a complete turn around from the Blair era.

Later, in the debate on industrial policy, Rebecca Long-Bailey, the shadow business secretary, quoted Clause 4. She said “it might not be on the back of our membership cards anymore, but it’s in our hearts.”

Matt Wrack, FBU general secretary, in moving the composite on Labour’s socialist green New Deal said, “Capitalism is killing the planet…we must put public ownership at the heart of this issue.”

This is a sea-change. It is a reflection of the radical – and left-moving – mood of Labour’s ranks.

An 80-strong Labour4Clause4 fringe meeting on Monday evening heard a string of speakers pledging their support for our campaign to bring back Labour’s historic pledge.

The meeting was opened and chaired by Mike Hogan, a delegate from Wavertree CLP, and one of the speakers in the debate.

Mike introduced Adriana Alvarez, a fast-food worker from the US, who is campaigning for a $15 minimum wage.

She was followed by John McDonnell, who recalled the way in which Blair removed Clause 4. “This was not simply about Clause 4, but of Blair’s plans to create a new party, where the left were removed or isolated.”

“However, a number of us felt that if Blair got away with it, there would come a time when Clause 4 could be restored.” John concluded: “We must bring back Clause 4. Solidarity!”

John was followed by Dave Ward, general secretary of the CWU, who expressed his support for the campaign. He said his union was about to embark on an industrial dispute with Royal Mail, who have gone back on their agreements.

He said the union, due to members’ experience of privatisation, had unanimously swung behind the return of Clause 4 and public ownership at their policy conference this year. “How ironic that Alan Johnson, a previous postal union general secretary, was the one who led the charge to get rid of Clause 4. That said, he never ever appeared on a picket line.” 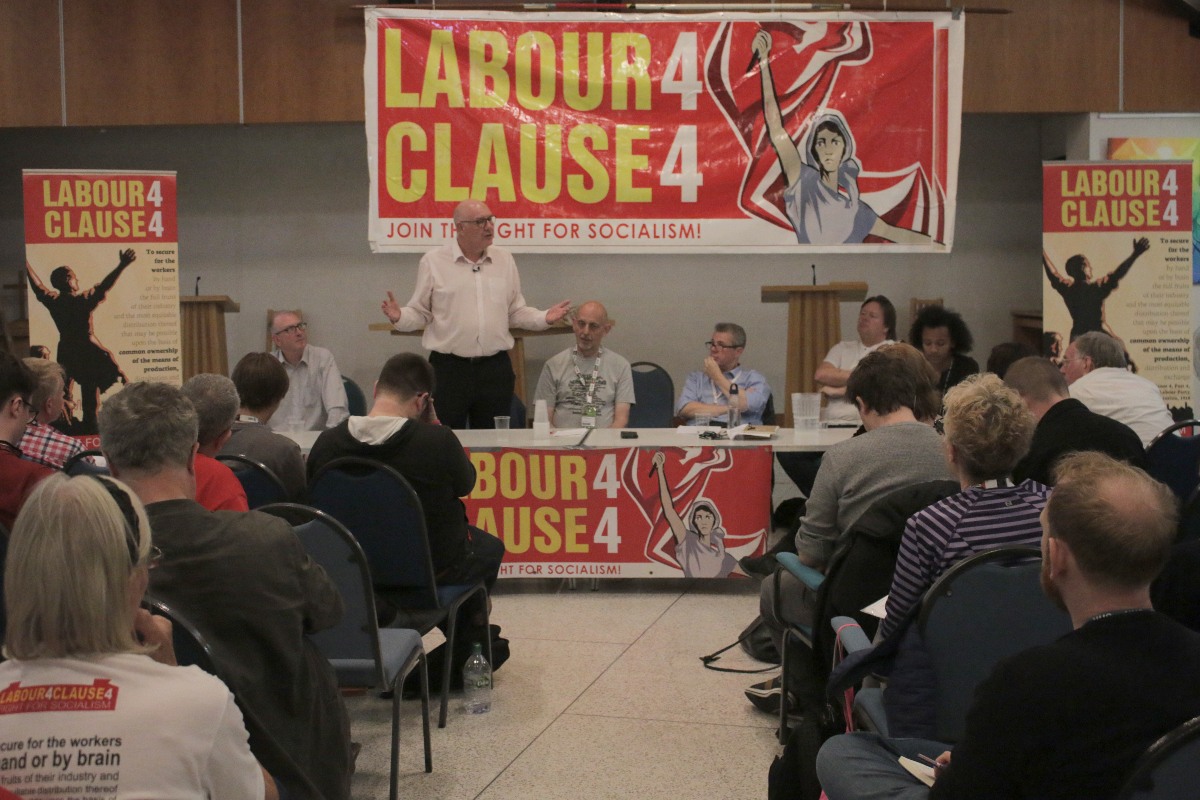 Dave argued for democratic workers’ control of any renationalised industries, noting that these ideas are becoming universally accepted.

Mark Serwotka, general secretary of the PCS public services union, spoke next. He opened by saying that he had left the Labour Party under Blair, hoping to build an alternative outside. Once Corbyn became leader, he rejoined.

He went out of his way to thank those who had stayed in the Labour Party and fought. “Without your efforts, there would be no Corbyn movement today,” he said.

Mark went on to say that this attack on Clause 4 by New Labour was an ideological attack in the name of neoliberalism. He therefore also welcomed the return to common ownership and the fight for a socialist Corbyn Labour government.

Ian Hodson, the president of BFAWU, was next up. Hodson and the BFAWU have given tremendous backing to the campaign. We are tremendously grateful for this support.

Ian railed against the brutal exploitation of the working class. But he also pointed to the fact that workers are fighting back, giving the example of Weatherspoon workers in Brighton and ‘McStrikers’ across Britain – both organised by the BFAWU.

He urged the trade unions to get behind Clause 4, which represents the interests of workers. The campaign has achieved great things, but there is more to do, Ian asserted. “Solidarity, comrades!”

Rob Sewell, the campaign coordinator and editor of Socialist Appeal, summed up the meeting by saying how proud he was in the way we have turned things around. 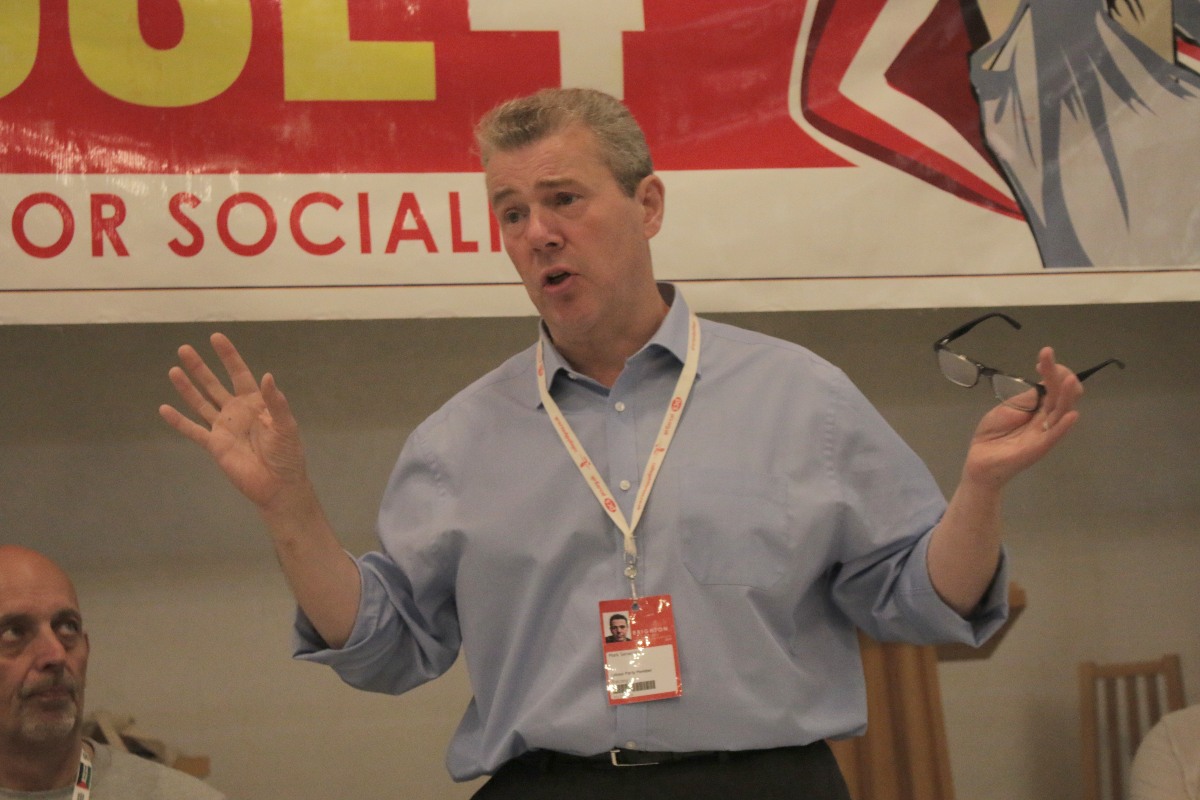 We swung over the majority of CLP delegates to support Clause 4. We got rid of Blair’s version, which is now history!

The NEC is establishing a working party to modernise the wording. While we think this is unnecessary, we will take this opportunity to mobilise the campaign and ensure common ownership remains at the heart of commitment regarding our party’s aims and values.

We will launch another roadshow, with events up and down the country to give grassroots members the opportunity to discuss what principles we want to ascribe in our constitution. And we will intervene in the trade union conferences to raise the ideas of socialism, in a clear and bold fashion.

This is not a set back – it is a step forward. It is a golden opportunity to take our ideas into the Labour movement. We have nothing to lose and everything to gain.