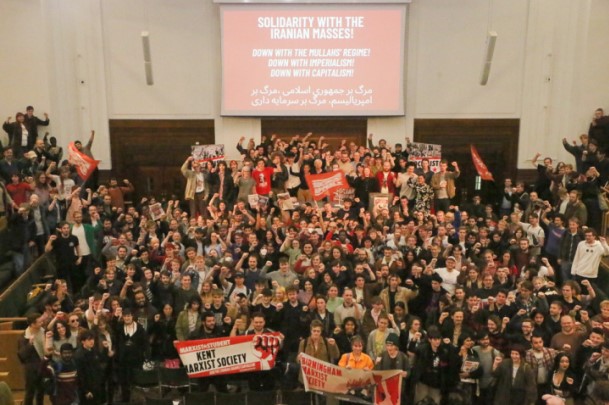 This year’s Revolution Festival was a showcase of optimism and enthusiasm, with over 700 attendees from across Europe gathering to discuss why Marx was right. Comrades left excited and energised, determined to build the forces of Marxism.

British capitalism and its political establishment are in utter turmoil. Truss has gone as quickly as she came. And her replacement, Rishi Sunak, inherits a party embroiled in civil war.

Starmer is waiting in the wings, ready to offer his loyal service to the ruling class; a ‘safer’ pair of hands for their decaying, crisis-ridden system.

Around the world, debt and inflation soar, while war rages in Ukraine. Devoid of any solutions, the representatives of capitalism despair. And yet, amongst millions of workers and youth, a new dawn rises, with class struggle back on the agenda.

From the recent ‘rebirth’ of the trade union movement in Britain; to calls for a general strike in France; to the inspiring movements in Sri Lanka and Iran: the masses are on the move across the world.

It was this mood of militancy, determination, and optimism that ran throughout every moment of this year’s Revolution Festival, the biggest and most successful event in the history of Socialist Appeal, as over 700 activists from across Europe gathered in London from 21-23 October to discuss revolutionary ideas, and to proudly say: Marx was right!

Saturday's closing session 'Preparing for Power: Perspectives for the British Revolution' was phenomenal. Rob Sewell outlined the crisis in Britain, and the enormous opportunities for the forces of Marxism.

Comrades travelled from far and wide to attend #RevFest2022 – from Falmouth to Fife. And it wasn’t just activists from across Britain. This year’s festival was a truly international affair too, with comrades attending from 14 countries around the world.

Starting the weekend’s activities on Friday afternoon, Socialist Appeal comrades from London led two walking tours of the city, following in the footsteps of Karl Marx and Vladimir Lenin.

They were joined by around 100 people, visiting the historic locations across the capital where these revolutionary giants lived, worked, and politicised, laying the foundations for the Marxist movement that we are building upon today.

Phenomenal turnout for the Marx and Lenin walking tours today! An excellent way to kick off #RevFest2022. Want to continue following in the footsteps of Marx and Lenin? Come along to Revolution Festival this weekend!

Marx may have found his ultimate resting place in Highgate Cemetery. But the youthful enthusiasm and dynamism on display throughout the weekend shows where the real monument to his ideas lies: within the flesh and bones of the comrades in the International Marxist Tendency who are helping to build the forces of Marxism today.

A world on the brink

“We are living in exciting times!” remarked Alan Woods to a packed out opening rally at Friends House on Friday evening.

As Alan explained, the capitalist class have been pushed to the brink of madness by the world crisis, resembling a man on a precipice who is unable to reason.

The situation is approaching a tipping point. Millions are beginning to discuss politics – not just in the workplaces, but at the pubs and bus stops too. It is clear that a deep questioning is taking place within society, as workers and youth look for a way out of capitalism’s impasse.

During the session, contributions from other comrades elaborated on the crises and class struggles taking place around the world: from the mounting debt in China; to the energy catastrophe in Europe; to inflation in Sri Lanka; and the rising class anger everywhere!

Especially inspiring was a report on the ongoing uprising of the youth in Iran. So important are these developments that an additional session was added to the Rev Fest programme, in order to provide comrades with a detailed discussion on the lessons from this episode.

These turbulent events are indicative of a wider radicalisation in all countries. Ordinary people everywhere, especially amongst the youth, are looking for ideas to change the world.

And this is reflected not only in the massive attendance at this year’s festival, but also by our recent #CommunismOnCampus campaign, in Britain and internationally.

The thirst for theory was evident throughout the weekend.

Brilliant talks and lively discussions were held on a huge range of topics, including: philosophy, science, and religion; the history of the Russian and Chinese revolutions; the climate crisis; cryptocurrencies and speculation; black nationalism; art and culture; and much more.

All of these saw rooms filled to capacity, with attendees – old and new – eagerly taking notes and contributing, absorbing the ideas and arguments.

This serious attitude to theory was also seen at the Wellred Books stall, which recorded sales of over £4,300 in Marxist literature over the weekend.

Wellred Books at #Revfest2022 this weekend.

What an amazing way to celebrate the launch of our new website! pic.twitter.com/XEsJW4Hb8V

As Saturday’s sessions drew to an end, Rob Sewell spoke at the day’s closing session on the perspectives for the British revolution.

Rob noted that the speed of recent events – around the world, and particularly in Britain – is unlike anything seen in decades. Crises are rapidly followed by further, deeper crises. Consciousness experiences sharp shifts. And capitalism’s representatives come and go in a matter of days.

As one comrade noted, it seems that no Tory minister can survive a fortnight on Socialist Appeal’s front cover!

Rob’s electrifying speech ended with a call to arms; to build the forces of Marxism – before comrades broke out into a rousing rendition of the internationale and bandiera rossa.

Marxists from more than fifteen countries singing The Internationale in solidarity with the revolutionary movement of Iranian women, youth and workers. #mahsaamini#IranRevoIution #RevFest2022 pic.twitter.com/MbnZPFFuRF

Clearly, huge events are on the horizon. And the Marxist tendency must be ready.

Huge dedication and sacrifice are required. And comrades across the IMT are stepping up to the plate.

Just as the day’s talks had shown the commitment to education and theory, so the financial collection following Rob’s plenary talk, which brought the day to a close, showed the amazing extent of comrades’ revolutionary sacrifice.

Saturday's closing session 'Preparing for Power: Perspectives for the British Revolution' was phenomenal. Rob Sewell outlined the crisis in Britain, and the enormous opportunities for the forces of Marxism.

Leading the collection, Josh Holroyd gave examples of the dedication displayed by comrades across the international. In Sri Lanka, for example, in a country plagued by blackouts and fuel shortages, comrades struggled through every barrier in order to hold their recent congress.

And comrades in Britain have shown equal determination.

Prior to the festival, comrades across the country had already raised £160,000 as part of the campaign to purchase a new office, with many pledging a weeks’ wages or more.

And this same spirit of sacrifice continued through the Rev Fest collection, with comrades announcing new pledges of hundreds – and even thousands – of pounds from the floor. As a result, in the space of just one hour, over £27,500 was additionally donated.

This leaves just £12,500 left to raise by the end of the year, meaning that a new office is within reaching distance.

Help us make this important step – providing solid material foundations for the building of the Marxist tendency in Britain – by making a donation today.

The world economy is in turmoil, class struggle is on the rise, and workers and youth are turning to revolutionary ideas.

Socialist Appeal is building an organisation capable of placing Marxist ideas at the head of the labour movement.

Will you help us in this historic task? pic.twitter.com/LTZ0V8iK3i

Echoing the words of Marx, Alan Woods reminded comrades at Friday’s opening rally that ideas, when they grip the minds of the masses, can become a material force.

The task, therefore, is to build a force capable of taking the ideas of Marxism to the masses; to the radicalised workers and youth, who are already looking for a revolutionary solution; and to the many millions who will be shaken by events in the stormy period ahead.

Socialist Appeal and the IMT are building such a force – in Britain and internationally.

This year’s festival was a step in that direction. When Rob Sewell asked on Saturday evening, “Who is here at Rev Fest for the first time?”, a sea of hands shot up throughout the audience.

This shows, in embryo, the potential that exists. But it is only the beginning. We must build with a sense of urgency to meet the challenges and tasks posed by history.

So we call on you – everyone who attended #RevFest2022, and everyone reading this report – to join us. Help us build the forces of Marxism! Get involved, get organised, and fight with us for socialism in our lifetime!