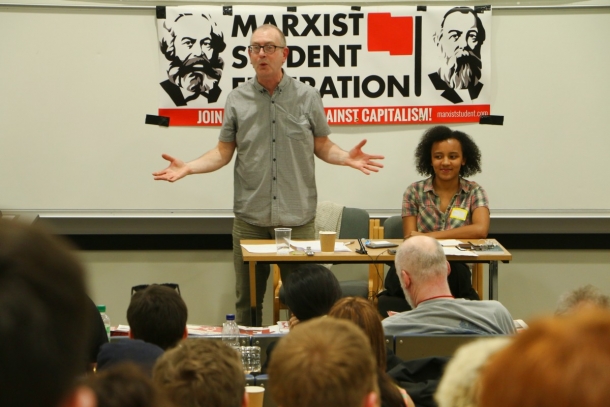 200 years ago the founder of scientific socialism and arguably the greatest thinker of modern times, Karl Marx, was born. To celebrate, on Saturday 5 May in London, Socialist Appeal (the International Marxist Tendency in Britain) held Marx in a Day: a series of talks and discussions exploring Marx’s revolutionary ideas and political activity. The event was a great success, with around 80 workers, activists, students, and young people from across the country – and even as far away as Paris – coming along and taking part.

Alan Woods opened the morning session with a talk on Marxist philosophy. As Alan explained, Marx started out as a follower of the great German philosopher, Hegel. Hegel’s main merit was in rescuing and developing the concept of dialectics: that the world is in a constant process of change - an idea that originated from the ancient Greeks.

Alan explained how, by putting this philosophy on a materialist basis, Marx created the philosophical tools for the genuine scientific investigation of the laws governing human history, society, and thought. For Marxists, the key to understanding society and its ideas, morality, culture, politics, etc. lies in the development of our material economic relations of production and distribution. It is changes in the mode of production, ultimately, that are at the root of broader social processes.

Following Alan’s introduction to Marxist philosophy, the day featured further sessions on the Marxist view of history and Marxist economics. These discussions looked in detail at the labour theory of value, the class struggle throughout history, the role that individuals play in history, and the current crisis-ridden state of the capitalist system in Britain and internationally.

In the final two sessions, comrades had the chance to learn about the life and work of Karl Marx - not just as a great thinker, but as a revolutionary.

From the 1860s, Marx skillfully and patiently brought together initially disparate working class and socialist groups from across Europe and America, eventually winning their political leadership. The organisation created came to be known as the First International - the first genuinely internationally working class organisation.

Marx, together with his lifelong collaborator and comrade, Frederick Engels, demonstrated throughout his life the need for unity between theory and practice in revolutionary socialist politics. After all, in the words of Marx from his Theses on Feuerbach: “The philosophers have only interpreted the world, in various ways; the point is to change it.”

The day ended with a premiere screening of Marx in London, a Socialist Appeal produced documentary on the life of Marx in Britain’s capital.

The film underlined the huge sacrifice Marx made to the cause of the working class. For the greater part of his time in London, Marx lived in utter poverty. As such, the ideas that the working class needs to liberate itself were developed at a tremendous personal cost by one man and his family.

200 years after Marx’s birth – and 170 years after the publication of the Communist Manifesto – the importance of studying Marxist theory and of defending the legacy of Marx and Engels has never been clearer than it is today.

The only future capitalism has to offer workers and youth is one of cuts, declining living standards, and increasing uncertainty. As the bosses continue to line their pockets with ever-increasing profits, the utter rottenness and bankruptcy of the capitalist system becomes ever-clearer.

As all the speakers at Marx in a Day emphasised, the only way forward for humanity is a reorganisation of society along socialist lines. This will allow us to use the immense wealth currently being hoarded by a tiny minority to instead satisfy the needs of everyone.

In this way alone will humanity be able to make what Engels termed “the leap from the kingdom of necessity to the kingdom of freedom” and begin the real history of humankind, freed from the barbarism of oppression and class exploitation.