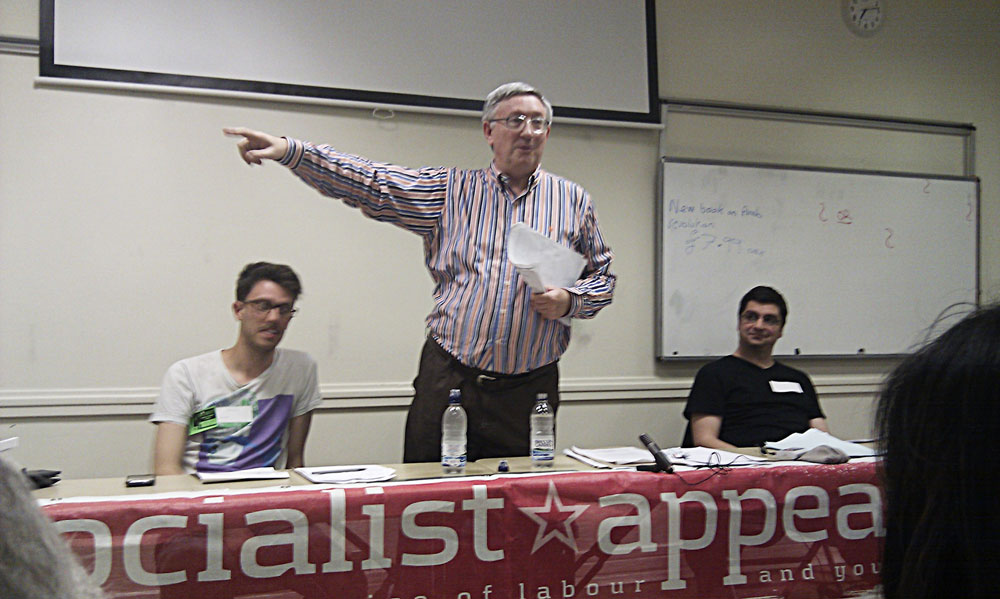 "I must say I was really impressed, first of all with the presence of so many young people, and the high political level of all those who spoke", commented Mark from North London. This summed up the general feeling of all those who participated.The Marxist Summer School, which was the first of its kind organised by Socialist Appeal, was far more of a success than the organisers had anticipated with over 100 attending over the course of the weekend. Those who attended ranged from experienced trade unionists to young people, including many school students.

The school opened on Friday night with Alan Woods speaking on the World Revolution with particular reference to the crisis in Europe, setting the tone for the entire weekend. This was followed by a contribution by comrade George Diakageorgiou from Greece, who gave a blow-by-blow account of recent events. George was followed by another comrade recently returned from Greece who gave an eye-witness account of the protest movement in the centre of Athens. This gave rise to a lively discussion which was very important in setting the scene for a whole series of discussions on Marxist theory throughout the weekend. 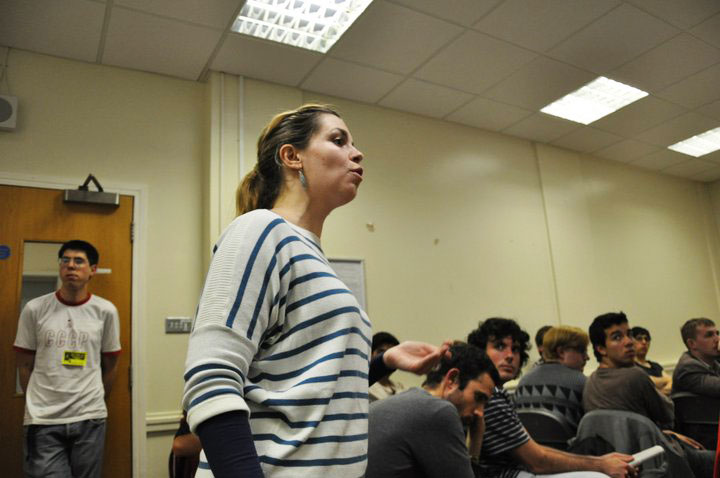 Greek comrade reporting from Syntagma Square Throughout Saturday two parallel programmes were on offer. In the morning there was one session on Marxism and Religion, introduced by marxist.com editor Fred Weston, and another on the Arab Revolution introduced by Hamid Alizeh, editor of the Iranian Marxist paper Mobarezeye Tabagathi. These were then followed by Marxist Economics and the revolutions in the colonial world after the Second World War, introduced by Rob Sewell, editor of Socialist Appeal, and John Pickard, former editor of the Militant, respectively. 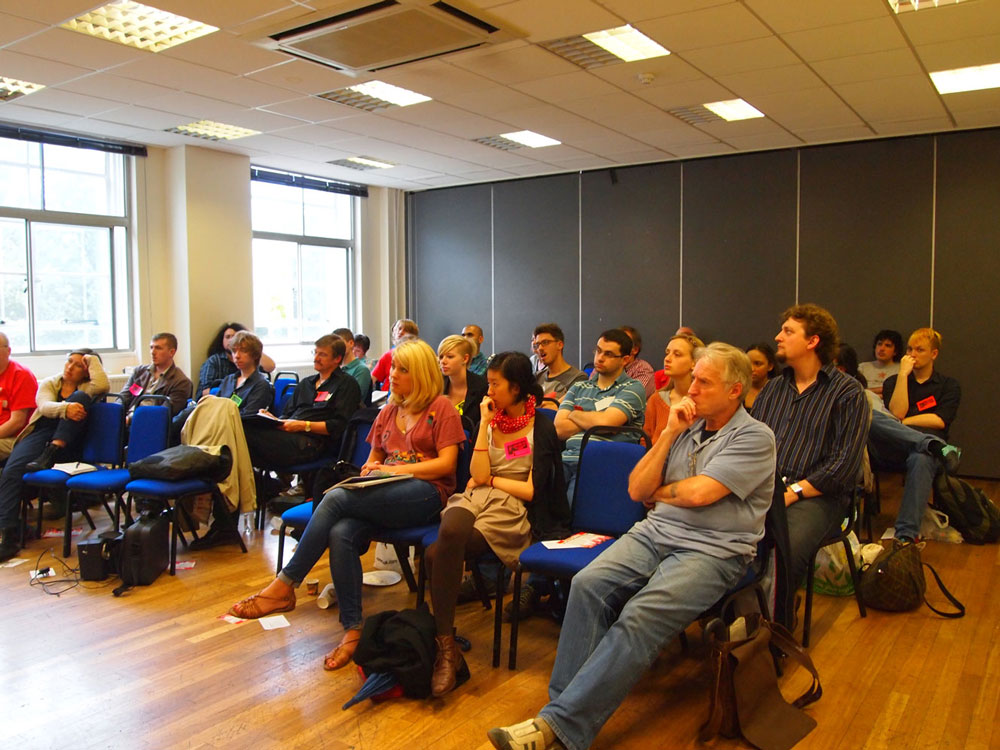 Marxism and Art The afternoon sessions were on Marxism and Art, introduced by Alan Woods, and Stalinism introduced by Fred Weston. All these sessions, morning and afternoon, provoked lively discussions and allowed the comrades to go into more detail on the ideas and relevance of Marxism within these differing subjects. The culmination of the Saturday was two film screenings running concurrently. Comrades had the choice of the Michael Moore film "Capitalism: A Love Story", introduced by Dan Morley or Gillo Pontecorvo's "Battle of Algiers", introduced by Steve Jones, both of which in different ways complimented a number of the discussions that had taken place. 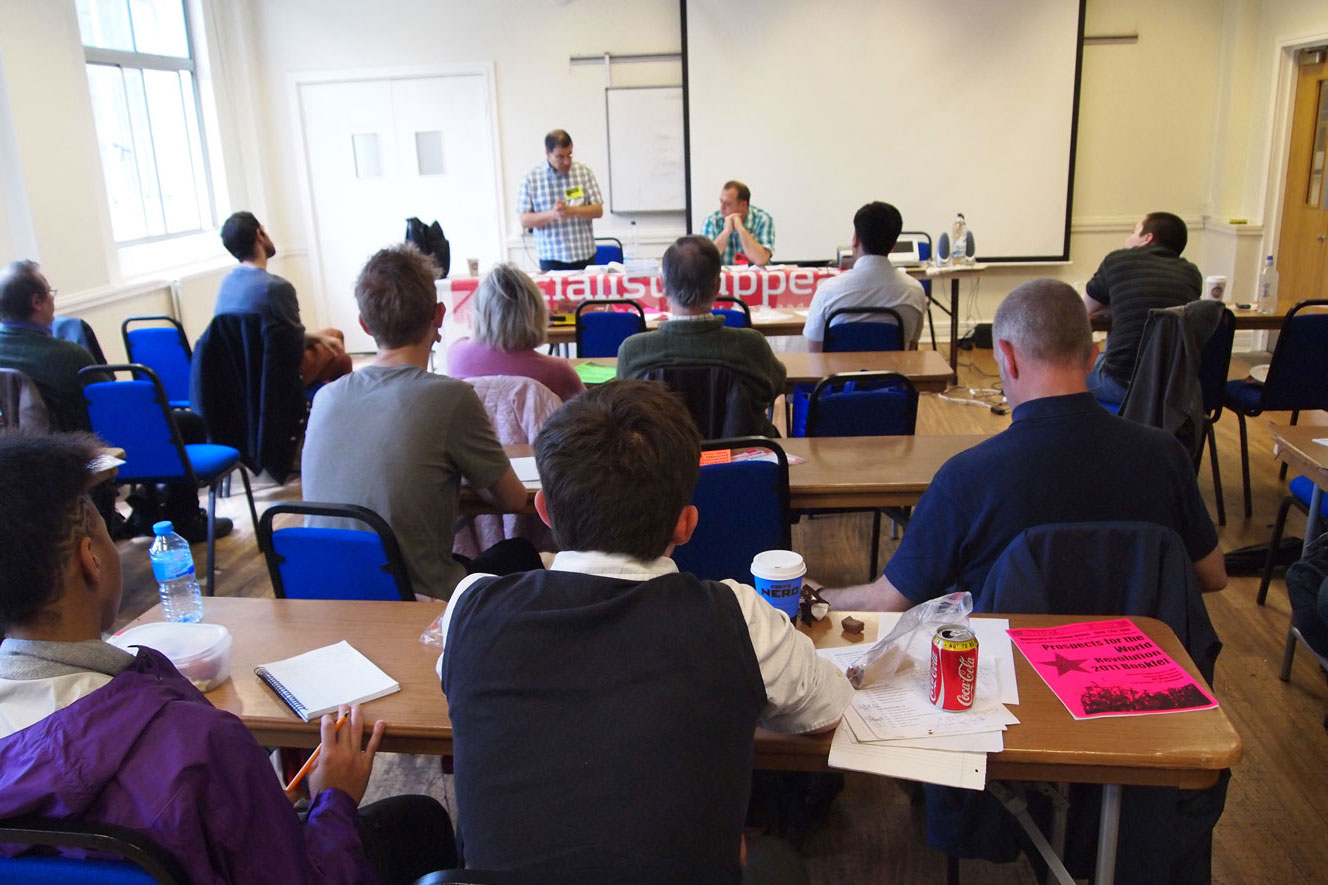 Fred Weston on Stalinism On Saturday evening the social allowed different comrades from all around the country, as well as comrades from Greece, Spain, Norway, Denmark, Sweden, Austria, Switzerland, Italy, Iran and Pakistan, to sample some excellent British beer and to get together and discuss the day’s events and to swap experiences. 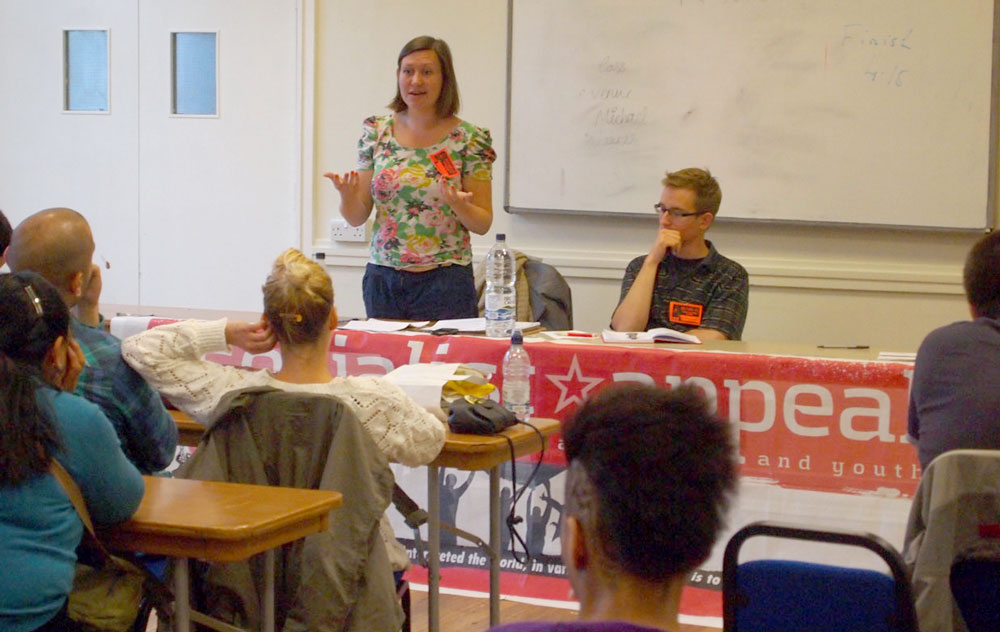 Marie Fredriksen on Marxism and Feminism The Sunday opened with a choice of two sessions: Rob Sewell spoke on the history of the Communist International, while Marie Frederiksen, editor of the Danish Marxist paper Socialistisk Standpunkt, spoke on Marxism and Feminism. After lunch Alan Woods spoke on the history of the Bolshevik Party, while Jorge Martin, International Secretary of the Hands Off Venezuela campaign, spoke on "Where is Cuba going?" 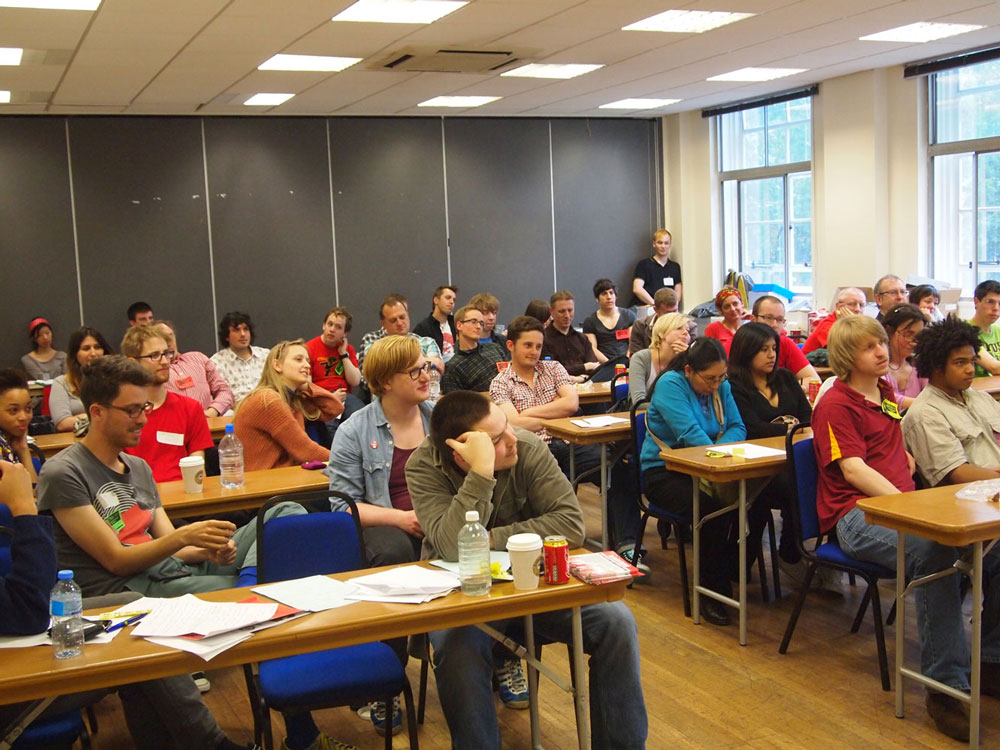 Closing remarks The final remarks were given by comrade Alan Woods who summed up the importance of the weekend, which had inspired so many of those attending, by underlining the importance of Marxist theory which is the rock solid foundation upon which the International Marxist Tendency stands. Recent events have shown that the tide is turning, and that the ideas of Marxism are becoming increasingly relevant. That explains the high attendance at this school. Even the organisers did not initially believe we would get such a turn-out. This success ensures that this weekend will become an annual event. 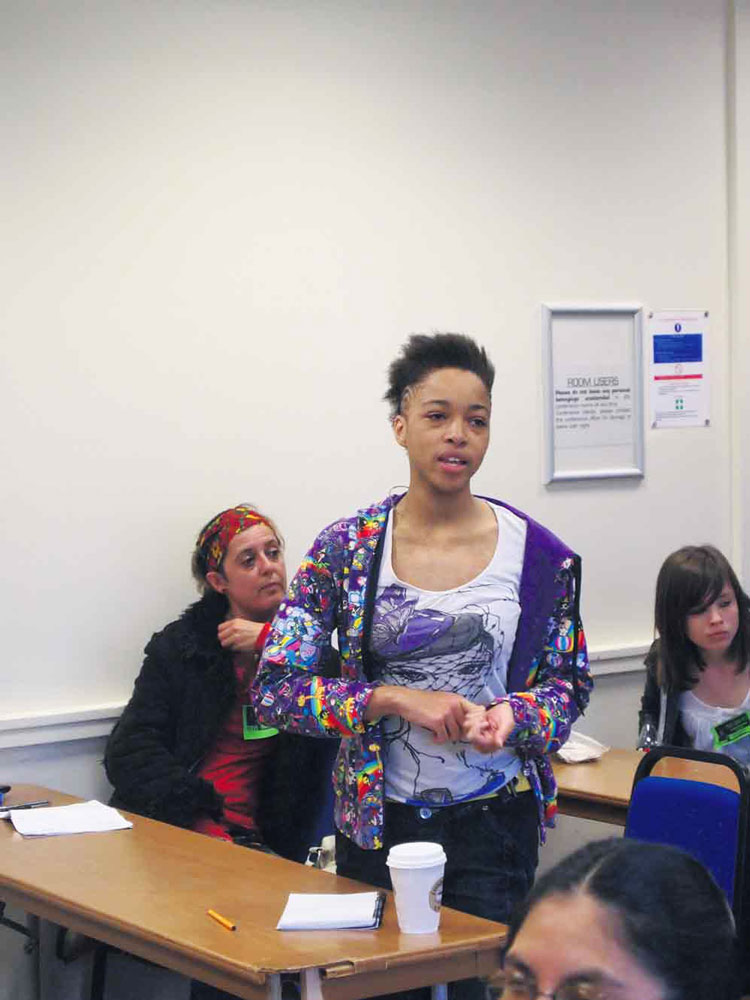 Sunday_Marxism_and_Feminism Raffle tickets were sold over the weekend which, together with the sale of food which was provided by the comrades, raised over £200 for the Socialist Appeal fighting fund. There were four prizes on offer in the raffle; a copy of the Militant from June 1968 with the headline "All power to the French workers", the three volumes of Trotsky's The History of the Russian revolution; a signed copy of the new book Thawra hatta'l nasr! Revolution Until Victory! A Marxist analysis of the Arab Revolution by Alan Woods, Jorge Martin and others; and also a bottle of Whisky! Special thanks to Pat, Lee, Joseba and Matteo who helped prepare the food, and Rachel and Cheyenne who helped on the raffle. Thanks to all those comrades who helped with the hundred and one different tasks needed to run the school during the course of the weekend.

Michael from Glasgow said of the event:

"The school was amazing! I feel like I have learnt more over the course of this weekend than the rest of the year put together. I feel more convinced than ever of the central role of Marxist theory in the building of the revolutionary organisation. And to meet people from all over who also understand this was quite inspiring. I can't wait for the World School in Italy!" 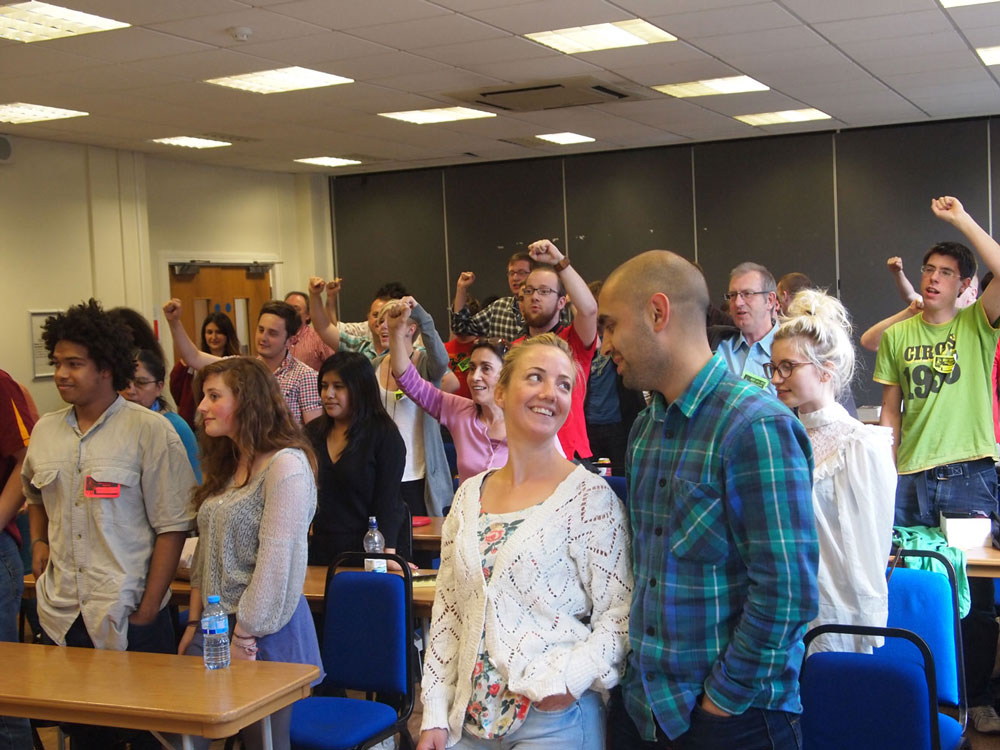 Singing the Internationale The contributions of comrades shows that we are training up a new generation which are being steeled in the ideas of Marxism. We can be very proud of this development, but it is only the beginning. Our task before us it to build on the ideas, and to build the forces of Marxism. Only in this way will be able to connect with the real movement of the working class and provide the necessary perspectives and answers at each stage. Ideas in themselves, although vital, are not sufficient. We have to earn the right to explain the ideas and earn the right to be heard. We look back with confidence in ourselves and our ideas and look forward with optimism to the role we can play in the liberation of humankind on a world scale. Forward to the world revolution!