The effects of the economic crisis have hit Canadian workers hard over the last year. Going into this summer's federal NDP convention, the NDP needs to stand up for workers and not enter into any more coaltions with the bosses' parties.

The effects of the economic crisis have hit Canadian workers hard over the last year. As of the beginning of June, over 362,000 jobs had disappeared in Canada since October 2008. Over half of these job losses have been in Ontario, mostly in the relatively well-paid manufacturing sector. According to Statistics Canada, Canada's unemployment rate currently stands at a 15-year high, but is going to continue to grow for years to come. Most bourgeois economists admit that even in the unlikely chance the economy begins to rebound by the end of this year, it will take much longer for jobs to return. 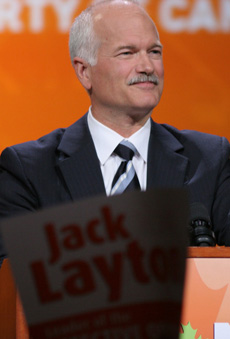 Jack Layton, leader of the New Democratic Party As one Toronto Star columnist put it, in this situation, one would expect for workers to be turning to Canada's “socialist” party, the NDP, in droves. But, the opposite is the case. In a recent poll, the federal NDP continues to draw only 14% support, several percentage points lower than what it drew in the last federal election and at the start of the economic crisis. Their support is even lower in Ontario, where the effects of the economic crisis are the most acute. It is painfully obvious that the situation for Canadian workers is much worse now than it was last October; we need to ask, why is it that workers are not turning toward the NDP?

Rather than giving workers a lead and offering a way out of this financial mess, the NDP's leadership has proposed taking workers down the path of more cuts and more attacks. The most obvious way in which it has done so was through the shameful and pathetic courting of the Liberals back in December. We all agree that the Conservatives are a bunch of reactionaries that are looking to hammer Canada's working class, but the Liberals are no different. Throughout history, the Liberals have been the natural voice of the bankers and bosses on Bay St. Let us not forget that it was the Liberal government of Jean Chrétien and Paul Martin that issued the worst cuts and attacks in history on Canadian workers. To get a measly six seats in Cabinet—and no access to the finances of the country—Jack Layton and the rest of the NDP leadership proposed to give up everything that the NDP stood for in the last federal election. Despite the backing of the entire labour establishment, workers across the country turned their noses toward this unholy coalition, even preferring Stephen Harper's mini-coup when he suspended Parliament.

Layton did himself, and the NDP, no further favours with a January speech to the Toronto Board of Trade. Besides quoting the reprehensible Milton Friedman, Layton went on to ask Canadian workers “to take a pay cut so your friends at the plant can keep their job.” (Toronto Star, 23rd Jan. 2009) What sort of leadership is this? From dropping their opposition to corporate tax cuts, to dropping their demand on an immediate withdrawal from Afghanistan, to asking workers to take the hit over the economic crisis – it is no wonder that Canadian workers are turning away from the NDP in this time of crisis.

For all of this, there is still huge potential for the NDP, if they begin to act as the political voice of the working class movement in Canada. Workers are not turning toward any of the other political parties. The last federal election saw the lowest voter turnout in Canadian history. The same was true of the 2007 Ontario provincial election. In May, the voter turnout in BC's provincial election was less than 50%! We can see that people are fed up with the current system, and that they know that none of the political parties have anything to say to get us out of this crisis. It is precisely those who are most affected by the capitalist crisis that could be attracted back by an NDP that stood on a socialist platform.

Even though people are terrified of losing their jobs in this crisis, there is no shortage of examples of workers refusing to back down in their struggle for a better life. York University teaching assistants struck for 85 days in the dead of winter before being legislated back to work by the Ontario government. Professors at UQAM were able to win significant concessions after striking for seven weeks. Workers at the Aradco auto parts plant in Windsor occupied their factory to demand their severance pay. At the time of writing this article, municipal workers in Windsor are entering their third month of being on strike. And, also at the time of writing this article, Toronto municipal workers, LCBO workers, and workers at the Globe and Mail are all set to go out on strike.

In his speech to the Toronto Board of Trade, Layton said that the only way to bring down the Conservative government was in conjunction with the Liberals. To this, we reply with a resounding No! First of all, the Liberals and Tories are two faces of the same coin—representing the interests of Bay St. Any coalition with the Liberals means selling out the workers and telling them that their struggles for defending their jobs, fighting for a better wage, and trying to make a living are futile. It is telling workers that Margaret Thatcher was right, that there is no alternative.

We, on the other hand, believe in the strength of the working class in being able to fight back against the bosses and their decaying system. Ever since capitalism became the dominant economic system, workers have been told that there isn't enough money for them. Every single reform, every single concession has had to be fought for. Even in the middle of the worst economic crisis in 80 years, workers are prepared to struggle for a better way of life. The NDP leadership needs to turn away from shady parliamentary tricks and manoeuvres and take its place as the political voice of the workers' fightback! If the likes of Jack Layton & Co. cannot realize this, then they must go. There needs to be a leadership that has faith in the workers; there needs to be a leadership that workers will recognize as one that won't sell them out, simply for having the perk of sitting at the cabinet table and having their own chauffeur-driven limousines.

At the NDP's federal convention this summer, NDPers have an opportunity to push the party leftwards and to send a strong message to the NDP leadership that workers will not pay for the bosses' crisis. We all want to bring down Harper's government—but this will be done on the streets, not in secretive dusty back rooms. We want to bring down Harper's government and replace it with a government that will fight for workers' livelihoods, not a Liberal one that will continue the bosses' attacks on workers.

For an NDP, leading the workers' fightback!