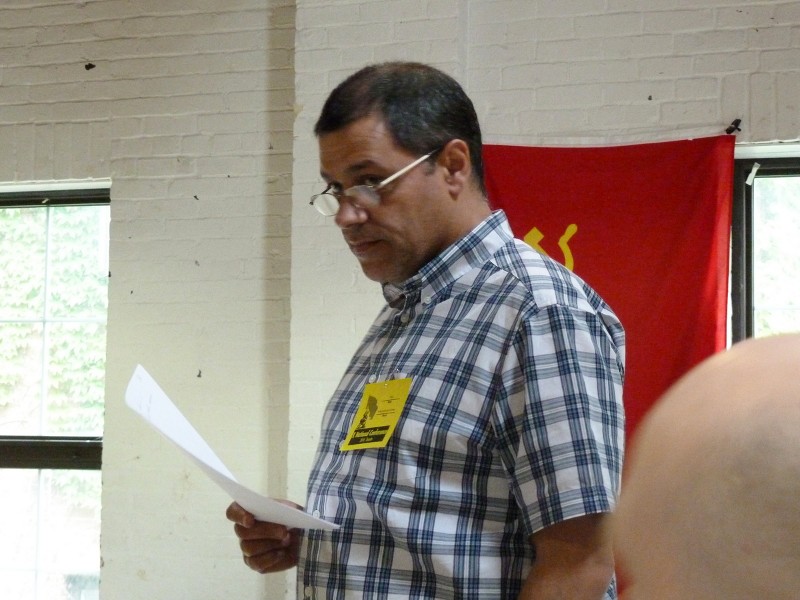 In late May, supporters of Fightback in English Canada, and La Riposte in Quebec, gathered to rally the forces of Marxism fighting the Canadian state. Over 40 young workers, students, and trade unionists gathered in Toronto to discuss the effects of the capitalist crisis and how to mobilize resistance to the bosses’ attacks. It was the largest and most successful gathering in the history of the event, with activists flying in from as far as Vancouver, and shows the growing presence of Marxist ideas in Canada.

For the first time in the conference’s history, we received greetings from Marxists on six different continents. The capitalist crisis has truly revealed the bankruptcy of capitalism; Marxist ideas are beginning to have a greater impact within the working class movement, to a much greater degree than at any point in the last generation.

The conference was opened by international guest Fred Weston, a leading British Marxist from Socialist Appeal, the Marxist paper oriented towards Britain’s Labour Party. Fred spoke on World Perspectives. In the period from last year’s conference, we have seen revolutionary movements erupt in Iran, Nepal, Kyrgyzstan, and Thailand; a counter-revolutionary coup in Honduras; Iceland going bankrupt; and the eruption of the working class in Greece in response to austerity cuts being demanded by the European capitalists. Fred pointed out that in any “normal” year, any one of these events would have dominated all of our attention. However, these events—all in the space of under a year—show how unstable the world situation currently is, and how the progressive aspects of capitalism are long past. Moreover, not one corner of the world is immune from the worst affects of the capitalist crisis; even the advanced capitalist countries of Western Europe are on the point of default and their workers up in arms.

Fred also pointed out that it is not the actual crisis that is going to have the greatest effect on workers, but the “recovery” from it. If we are to believe the bourgeois economists, much of the world is beginning to emerge into the recovery. It is this recovery that should interest the Marxists. This is going to be an extraordinarily weak recovery, completely unlike the recovery that was seen in the advanced capitalist crisis after the Great Depression and the Second World War. Many workers were convinced that if they keep their heads down and worked hard during the crisis, they would be rewarded afterwards with better wages, better security, and better benefits. However, this is not going to be the case. As the Greek crash has shown, workers can expect their living conditions to only deteriorate as the entire burden of paying for the capitalist crisis is placed on their backs. The explosion in Greece is likely to become the rule rather than the exception in the coming period.

After Fred’s lead-off, many comrades intervened in the discussions. In fact, there were too many speakers for the allotted amount of time! Among the interventions, comrades added very valuable information on developments in countries like Iran, Thailand, the United States, Chile, and Indonesia, which all helped to round out the international situation for the comrades present. 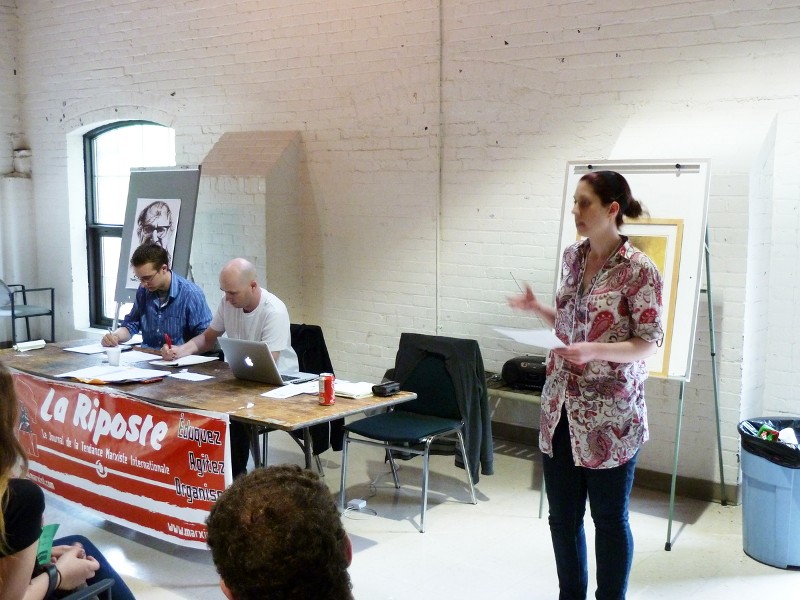 Camilo Cahis led-off on Canadian Perspectives in the first afternoon session. Camilo began by stating that although in relative terms, Canada was not hit as hard as some other countries, we are still far from the rosy “Canadian miracle” that the corporate press has touted. The Canadian economy retreated by nearly 3% last year and the economy shed over 600,000 jobs. All levels of government have racked up record levels of debt that need to be paid in the coming period. Furthermore, even bourgeois economists are beginning to worry about some weakening signs in the economy.

The rebound in the Canadian economy in the beginning of this year has largely been due to the booming real estate market. In Toronto, housing prices have (on average) increased over 13% in the last year while in Vancouver, prices have increased by just under 20%--and this is in the midst of the capitalist crisis! Housing prices in Toronto have increased in every financial quarter for 13 consecutive years. The major real estate firm Royal LePage has warned about the massive housing bubble that is being formed. What has driven this real estate boom has been the historically low interest rates that have made real estate speculation so attractive for many Canadians. However, inflation is becoming a real problem in the economy and the Bank of Canada has just begun to raise interest rates once again. There is a serious possibility of a second wave of bankruptcies if mortgages become unaffordable. Furthermore, an increase in the cost of borrowing, combined with the turbulence caused by the Euro-zone crisis, could once again plunge Canada back into recession.

Another worrying sign in the so-called “recovery” are the levels of debt accumulated by multiple levels of government. On the surface, things look much better in Canada than in the other advanced capitalist countries; the federal government’s deficit is equal to just over 3% of Canada’s GDP and Canada has the lowest debt-to-GDP ratio of any of the G-8 countries. However, if we dig a little deeper, things suddenly don’t look so good. Quebec’s debt-to-GDP ratio is nearly 100%, and only a few percentage points lower than Greece. Ontario’s budget deficit for this year is twice that of California’s, even though California’s economy is three times larger. Furthermore, by the Ontario Liberals’ own estimations, the province is set to record budget deficits until at least 2018, by which time the province may begin to have problems securing loans at an affordable rate. Across the country, the capitalist class is pressuring governments to cut spending on social programs, cut wages and benefits for public sector workers, and to place the burden of paying back the bailouts and subsidies on the shoulders of the working class. In particular, it is now public sector workers that are being targeted by all levels of governments who hope to make these cuts and attacks permanent. 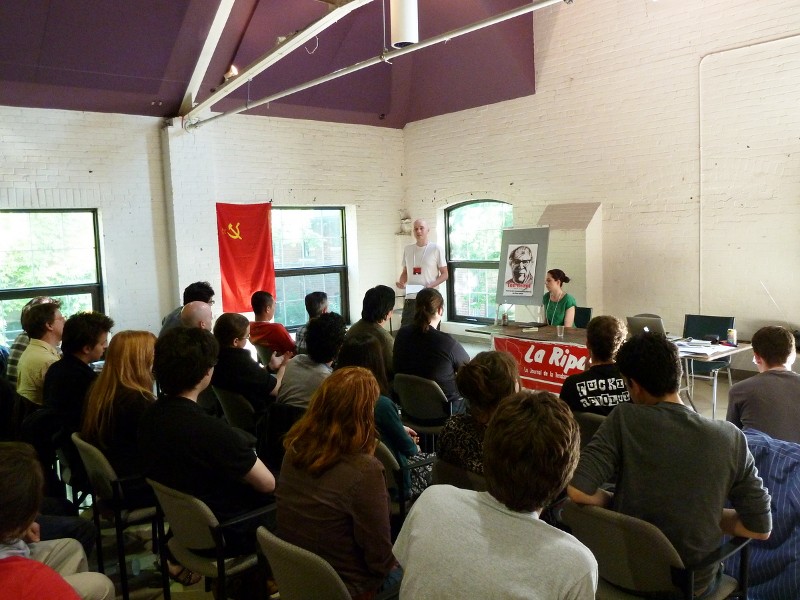 The final session of the first day was led off by Alex Grant on the mass organizations of the working class. Alex stated that most so-called Marxists have ignored one of the key parts of the Communist Manifesto, which states:

It is the crisis of capitalism that forces workers to fight back. Alex explained the historical rule worked out by Ted Grant, that when workers first move to change society they tend to do so through their traditional mass organizations. Workers do not understand small organizations and those outside the mass movement will find themselves in the political wilderness. It is the task of Marxists to build up a base and become recognized as a legitimate tendency in the mass movement in order to become a genuine option for workers looking for revolutionary answers.

The morning of the second day of the conference dealt concretely on how to build the Marxist tendency within the Canadian state. There was a lively discussion on how to better get the ideas of Marxism out to workers and youth, especially as more and more people are beginning to question the logic of the capitalist system and what alternative there is out there.

The comrades discussed several openings. One important one is the G20 protests in Toronto, which are going to attract activists, workers, and youth from around the world. The $1.1-billion security bill is generating great anger amongst the mass of the population, especially given the so-called “restraint” that the federal government has been preaching to workers. The comrades from Quebec talked about the openings within Quebec Solidaire (QS) and the radical mood appearing within the Quebec working class, united behind a new Common Front.

As well, the comrades noted that it has been one year since Fightback went to a colour monthly. People have noticed our new professionalized look and have commented very favourably on the magazine’s design. Moreover, the fact that Fightback comes out more frequently means that a Marxist analysis of news and events is timelier than ever, once again expanding the scope and reach of Marxist ideas when they are most relevant. Another success has been the launch of our French-language paper, La Riposte, which is now being published regularly on a quarterly basis in Quebec. Those present resolved to launch a subscription drive for both papers, in order to increase the impact of Marxist ideas in the movement. To get your subscription, contact us at fightback@marxist.ca or lariposte@marxiste.qc.ca.

The last session of the two-day conference was a report on Venezuelan Perspectives by Camilo Cahis. Camilo had travelled to Venezuela as part of a delegation and while there, had also attended the re-founding Congress of the Venezuelan Marxists within the PSUV (United Socialist Party of Venezuela). Camilo talked briefly about the history of the Venezuelan Revolution, leading up to the pivotal point that the revolution has reached. The global capitalist crisis has hit Venezuela hard, just as every other capitalist country around the planet. In 2009, Venezuelan GDP dropped by 2.9%. In 2010, it is expected that the Venezuelan economy will retreat by a further 0.6%. In large part, this is due to the capitalist class in Venezuela; even though the Venezuelan government has attempted to extend cheap credit to business owners, the Venezuelan capitalists refuse to invest.

Camilo explained in detail the parasitic nature of the Venezuelan oligarchy and their attempts to undermine and destroy the revolution. Through the first half of this year, Venezuela had been going through its most severe drought in history, which has forced the government to restrict water and hydro electricity usage, which in turn has severely affected the Venezuelan economy. The Venezuelan opposition has prayed for the drought to continue, in order to cause further chaos in the economy! The Venezuelan bosses have continued their disruption of the food chain and have done everything in their power to get around efforts by the Venezuelan government to control food prices.

Fortunately, the Venezuelan Marxists around Lucha de Clases are participating fully in the PSUV, even running a couple of candidates in the recent primary elections. The first print run of their paper sold out in under a couple of weeks, showing the thirst for Marxist ideas amongst the Venezuelan masses and the desire by the Venezuelan workers to successfully complete the tasks of the Venezuelan Revolution.

The weekend conference ended with an enthusiastic and hearty singing of the Internationale. The conference has enthused a whole new layer of young revolutionaries who are committed to defending Marxist ideas as the only answer to the crisis of capitalism. The capitalists and the reformists can only offer workers more cuts and attacks; our solution is to take control of the productive forces for our benefit. Although the vast majority of Fightback supporters are youth, who are still in school or working low-paying jobs, the comrades showed their commitment and dedication by pledging over $5,700, a record collection. We are still looking to add to this figure, so contact us to support Marxism in Canada. Every comrade returned back to their community, ready to sell Fightback and reach out to new workers and young people with ideas that can bring down this rotten system.