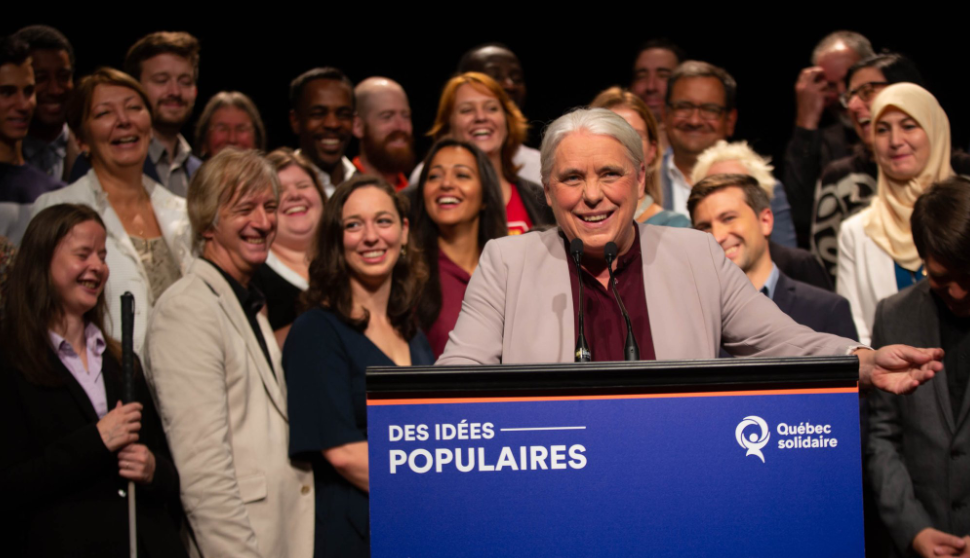 With the Quebec general election approaching on 1 October, the increasing support for the left-wing Québec solidaire has provoked a wave of panic in the camp of the Parti Quebecois and the establishment media. Obtaining just 7.6 percent of the vote in the 2014 election, the party has now risen to 16-19 per cent in the latest polls.

Faced with this threat, PQ leader, Jean-François Lisée and the media have launched a hysterical campaign of red-baiting and slanders against QS, accusing them of being “Marxist” and “anti-capitalist.”

The rise of Québec solidaire

The main defining feature of this election thus far has been the campaign of Québec solidaire. The left-wing party has made a series of bold proposals that have set the agenda and caused a significant increase in support for the party. To start off the campaign, the party released a series of election signs presenting such demands as “Free education from the daycare to the doctorat,” “Free dental insurance for all,” and “half price for public transportation.” It is also notable that QS is the only party to have concrete political content on their election signs and not just empty slogans.

The party also unveiled plans for a massive expansion of the public transportation network in Montreal, with 38 new metro stations. More recently, they announced that they would introduce an “anti-burnout” bill which would guarantee four weeks of paid vacation, half a paid sick day per month, five additional paid days off for family responsibilities, and two new statutory holidays: International Women's Day (March 8) and International Workers' Day (May 1). The party is promising to hire 4,400 teachers and professionals to help the education system and they are pledging to keep the CLSCs (local public health-care clinics) open 24/7.

In order to pay for these ambitious promises, the party announced a series of major tax increases targeting big businesses and the rich. Their plans would increase the corporate tax rate by nearly three per cent and implement a progressive taxation system where anyone making more than $97,000 per year would pay more, while those making less than $80,000 would see their income tax decrease.

In response, the establishment parties unanimously declared these policies “unrealistic” and warned of economic disaster. For example, PQ leader Jean-François Lisée said that “the economic shock that it would have on Quebec would be terrible.”

The opinion of the voters, however, seems to be quite different so far. As the campaign rolled on, QS continued to increase in support as more and more people became inspired by their propositions. The party has clearly set the agenda of the entire campaign which has been obvious from the fact that the PQ and the PLQ have largely been tail-ending QS. This was clearly seen when both parties opportunistically put out watered down versions of QS’s propositions such as the PLQ’s plan to give free public transportation to students and elderly people, or the PQ’s proposition to implement a $15/hour minimum wage phased in over a longer period of time. 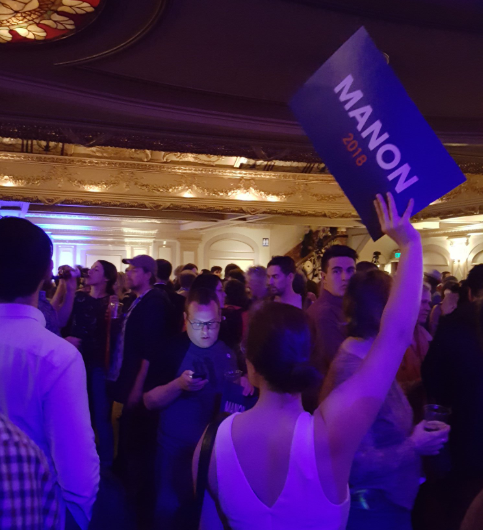 The rise of Québec solidaire has defined this election / Image: fair use

One major element that has affected this campaign is that this is the first election in more than 40 years in which independence is not a central election issue. In the past the whole debate would quite often get sidelined into a back-and-forth between the PQ and the Liberals over the question of sovereignty. The current election has been marked by the near-absence of the issue of independence, which has not been a theme in the leaders’ debates. Instead the discussion has been focused on the bread-and-butter issues of healthcare, education etc. This shift in focus is a contributing factor to the rise of QS, which has the most bold propositions on all of these socio-economic issues.

In addition, after more than a decade of debate around reasonable accommodation and religious symbols in the public sphere, these issues have not dominated the campaign. While Legault has clearly been trying to raise the topic of immigration to distract people as his party has been dropping in the polls, it hasn’t taken off, and Legault has made himself look like a fool when it became clear that he does not know much about the immigration process.

Lisée calls on his attack dogs

As more and more people look to QS, panic has developed in the camp of the PQ. Engaged in a close race to keep his own seat in the riding of Rosemont against Vincent Marissal from QS, Lisée was forced to admit that QS “is now an important player.” To try to ward off this threat, he first called on “progressives” to vote strategically for the PQ because QS “will never be elected.” But panic has turned into desperation, and the PQ establishment has now resorted to the tried-and-true method of lies, slander, and red-baiting.

During the debate on Thursday, Lisée went on a bizarre attack against Manon Massé, demanding to know “who pulls the strings at Québec solidaire?” and “Who is the boss?” He maintains that QS is manipulating the electorate and hiding their real aims, which he claims are far more radical and dangerous and are pushed by a sectarian and dogmatic clique behind the scenes.

“When you hide a political program, that's manipulation… When you say that the former president of the CSN metropolitan council of Montreal, one of the most powerful men in the union world, who is the leader of Québec solidaire, is just there to lick stamps, that’s manipulation”, he said, in reference to Gaétan Châteauneuf, who appears as the official leader of the party on the forms of the office of the Chief Electoral Officer. Of course, there is nothing new here, and Lisée cannot fail to know that Châteauneuf is only “leader” on paper because the Chief Electoral Officer requires the party to name one.

This attack was followed up by an editorial interview with Lisée by Le Devoir on Friday lasting more than an hour, where the bulk of his criticism was aimed at Québec solidaire. Then, this Monday, using classic red-baiting tactics, he stated that QS is “anchored in Marxism” and “anti-capitalist.” They even brought out ex-leader of the Bloc Quebecois, Gilles Duceppe to attack Massé for being unrealistic and “living on another planet.” He went so far as to stoop to the level of petty elitist attacks, criticising her not speaking proper French!

Complaining that QS has been given a “free ride”, the PQ has called out their attack dogs in the media who have turned their guns against the small left, party. Over the past week there has been a virtual torrent of slanderous articles against QS, making all sorts of baseless claims about the party designed to scare people away from voting for them. Michel Hébert from Le Journal de Québec even took the opportunity to give Socialist Fightback some free press: “We should also read La Riposte socialiste, the official organ of the discrete little buddies of Québec Soliloquaires… And don’t miss the Marxist meeting in February at Concordia University.”

The QS leadership responded by denouncing these attacks and called Lisée “desperate”. Party spokesperson Gabriel Nadeau-Dubois released a video on Saturday titled “We march to power!” where he correctly states that:

“For a few days, you have seen them attack us. See this as a sign, that we bother them more than ever. If they continue to attack us like this, it is essentially because they feel it well that their days in power are numbered.”

“If our opponents have decided that helping the world with public dental insurance and fighting climate change is ‘Marxism’, well, that's their problem. Honestly, I have never cared about labels.

"On October 1st, people will vote for ideas. This, our opponents know, but they are short of ideas, so they spend the last week of their campaign scaring everyone. What does this tell us? Above all that they are afraid of us.”

QS needs to not give in and respond unapologetically to these attacks. Unfortunately, Massé has since clarified that she is “not a Marxist” but “extremely pragmatic.” But people are tired of “pragmatic” politicians who have ruled Quebec in an extremely “pragmatic” way—for capitalism.

QS needs to not give in and respond unapologetically to attacks and red-baiting / Image: yanik crepeau

The popularity of QS is not due to their perceived “pragmatism” but to their bold, sometimes radical propositions. They are perceived to be a radical break with the past and to represent something completely different from the three capitalist parties. The establishment seem to have lost their minds and the papers are filled almost exclusively with attacks on QS because the capitalists see QS as a threat. More importantly, they see a potential mass movement being awakened by the enthusiasm behind the party and are not too excited about that. The 2012 Quebecois Spring scared the ruling class in Quebec, and this is why they are so hysterically lying and slandering QS just days before the election.

It is impossible to be certain about which way this election will go. By all estimates, QS will score the best result in the party’s history. With more than 70 per cent of the population of Quebec desiring change, QS could continue to ride this wave of support all the way to the ballot box and gain big.

These attacks on QS demonstrate that the capitalists know that their system can only offer misery and suffering to the population. That is why, when anyone makes proposals to try to address the poverty and suffering in our society, they are denounced as “Marxist”, as QS is now. There is a truth in this, in that only under socialism could we possibly provide good jobs, free dental care and education for all, and protect the environment. The capitalists know this and so should we.