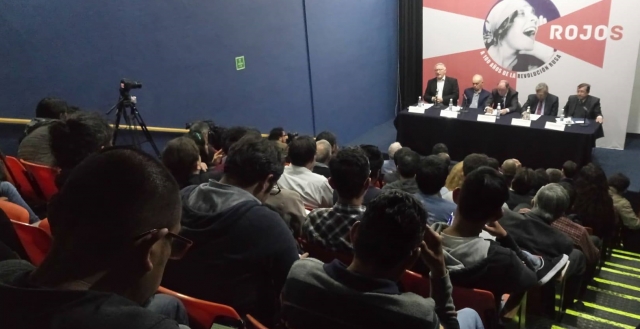 On 7 November, at 6 pm, in Mexico City, in the auditorium of the Leon Trotsky House Museum, a meeting was held in commemoration of the 100th anniversary of the Great October Revolution, with nearly 100 in attendance.

The subject of the talk was; "Mexico and Russia: two revolutions of the twentieth century". The invited speakers were Cuauhtémoc Cárdenas; Eduard R. Malayan, the ambassador of the Russian Federation in Mexico; Esteban Volkov, grandson of Leon Trotsky, and the leader of the International Marxist Tendency, Alan Woods.

This event is part of a series of conferences that the Leon Trotsky Museum has organised to celebrate the 100th anniversary of the October Revolution. 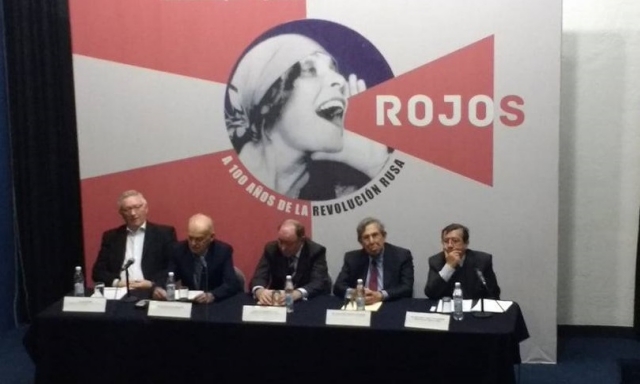 The first to speak was engineer Cuauhtémoc Cárdenas, son of General Lázaro Cárdenas, who was the president of Mexico who invited Trotsky to the country in the 1930s, when all the other countries were closed to him. He also directed a left split in the PRI (Revolutionary Institutional Party) in 1988, to form the PRD (Party of the Democratic Revolution), and was the first leftist mayor in Mexico City.

He spoke about the achievements of the Mexican Revolution, for example the right of the peasants to have land, including laborers who had previously lived in semi-slavery. Other reforms included right to work, national control over oil (shutting out foreign speculators), the Mexicanization of banking and so forth. He recognized that the Mexican Revolution was the great transformer of society and that the influence of the Russian Revolution was great in Mexico. Governors and politicians of the time referred to what the Bolsheviks did in Soviet Russia as an example.

Second to speak was the Mexican ambassador to the Russian Federation, Eduard R. Malayan, who, despite Putin's disastrous policies (we note the Russian leader has not even celebrated the anniversary of the Russian revolution), has always been a good friend of the Leon Trotsky Museum. This historical monument to Trotsky’s life is being visited, more and more, by Russian citizens, and Malayan has translated the museum's guide into Russian.

The day before, at the opening of the exhibition "Rojos" (Reds), which visually depicts some aspects of the Russian Revolution and its impact in Mexico, he said:

"Today, in Russia, there is no one who questions the role of Lev Davidovich Trotsky in the October Revolution. Everyone knows that this revolution was led by two men: Lenin and Trotsky."

In the exhibition on the anniversary of the Russian Revolution, among other things, he mentioned that the influence of the revolution and its consequences were felt worldwide. He also said that the revolution was never intended, by Lenin and Trotsky, to remain enclosed within the limits of the Russian borders: it was never thought that socialism could be built in a single country.

He insisted that Trotsky is now vindicated in Russia, that books have been published about him and even the most popular Russian television channel has run a series about him.

But then he added that today the October Revolution elicits "contradictory opinions", and quoted from an "official" poll showing only a minority in Russia have a positive opinion of the events 100 years ago.

In his speech, Alan Woods answered the ambassador by quoting an English saying: "there are lies, damned lies and statistics". He added that in Mexico it is well known how public opinion polls can be manipulated. It was clear that these surveys serve the interests of the Putin government, which has outright suppressed all the celebrations of the October Revolution.

After the ambassador, it was the turn of Leon Trotsky's grandson, Esteban Volkov, director of the Leon Trotsky House Museum. Esteban has dedicated his whole life to preserving Trotsky's legacy against Stalinist falsification and fighting for historical truth.

Volkov began by describing the brutality of capitalism today and said that in this context the need for Marxist theory was fundamental. And it was precisely the Russian Revolution, the first victorious proletarian revolution, carried out by those who had been exploited and oppressed, which demonstrated that the working people of the countryside and the cities can rule society.

Esteban recalled that it was Lenin and Trotsky who led the revolution that was subsequently undermined by the process of bureaucratic degeneration. He commented, rightly, that this degeneration was based on the material conditions of a backward country, with a low economic and cultural level, and the isolation of the Russian revolution due to the defeat of the revolution in Germany. All these conditions accentuated the fatigue of the masses and this is how the bureaucracy could take power. Stalin served as the seal upon this whole process of degeneration. 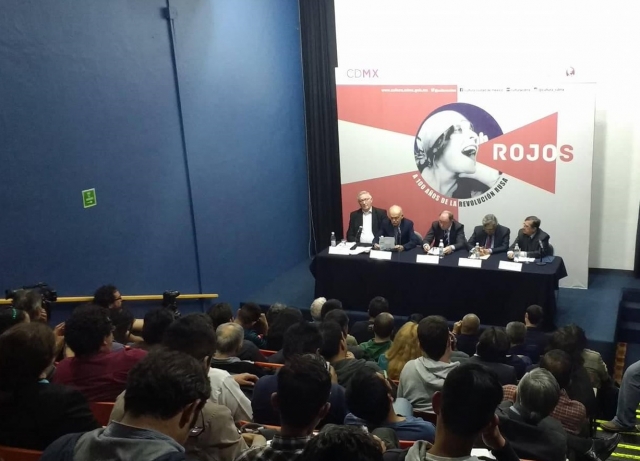 Volkov's speech was full of optimism in the struggle for socialism.

Closing the rounds of interventions was the British Marxist, leader of the International Marxist Tendency and editor of the popular website marxist.com, Alan Woods. Alan affirmed that the Bolshevik revolution was the most important event in history, which demonstrated the superiority of a nationalized and planned economy in the concrete language of steel, coal and spacecraft:

"The Russian Revolution showed that it is possible to manage a gigantic country without landlords, bankers nor capitalists and have excellent results."

Alan denounced the campaign of lies orchestrated by the enemies of socialism as a gross falsification of the events of 1917. He attacked the whole campaign that has been deployed in the last period seeking to distort events in order to inhibit the participation of youth in the struggle for socialism. He said:

"There are many lies that have been said about the Russian revolution, many of these come from former communists and intellectuals, including in Russia, who seek to prevent young people from carrying out a revolution."

Alan explained that it is a gross lie that the revolution was useless. He recalled that Russia before the revolution was a very backward country, at the level of Pakistan at present, and that it was thanks to the planned economy (and in spite of the bureaucracy) that the Soviet Union developed to unprecedented levels, competing in some areas with capitalist powers like the US.

After the introductions a brief round of questions from the audience was opened. These were very diverse, but most were about the viability of socialism. Some participants asked specific questions, for example, about the role of Stalin in the revolution, or in World War II. Someone asked Alan about the relationship between the Mexican Revolution and the Russian Revolution.

Alan answered in the following way:

"The Mexican people have much to thank for to their revolution, which was reflected in cultural richness: the country’s art, literature, music and architecture. But it must be said that 100 years later the rotten Mexican bourgeoisie has destroyed the country.

"This beautiful land, with so much wealth and so many possibilities, has been plundered and ruined by a voracious bourgeoisie, which in turn is totally subordinated to US imperialism. The only solution to the problems of Mexico is a new Mexican Revolution that repeats the same heroism that the Mexican people showed 100 years ago, but at a qualitatively higher level. And the only possible model for the new Mexican revolution is, precisely, the Bolshevik revolution of 1917."

This was one of the most applauded interventions.

And thus came to an end the first in a series of meetings on the anniversary of October, which will take place in the course of the week.