A string of right-wing protests against enforced social distancing and stay-at-home policies in Texas, Michigan, Virginia, Florida, Louisiana, and other states have received copious media attention in recent weeks. One particularly notable event was “operation gridlock” in Michigan, in which protestors got in their cars and deliberately blocked traffic—making it impossible for even ambulances to get through to respond to medical emergencies. Photographs and videos showed participants flying confederate flags, fascist insignias, and other reactionary symbols. Members of the semi-fascist Proud Boys gang were in attendance. The Michigan Conservative Coalition, which has close ties to figures in the Trump campaign, helped to organize the protest. This article was originally published on April 29.

In many cases, the protesters gathered in person, some openly brandishing guns, defying the social distance practices that have become the norm for the vast majority of the population over the last few weeks. In nearly every case, these protests have been connected to national conservative organizations. Despite claims by many participants that they represented the organic indignation of “freedom-loving patriots” against “government tyranny,” the protests are being sponsored and supported by sections of the capitalist class—including the Trump administration itself. As proof, look no further than Trump’s April 17 tweets: “LIBERATE MICHIGAN” and “LIBERATE VIRGINIA.”

However, far from representing a grassroots upsurge of popular discontent, this peculiar phenomenon represents only a minuscule minority. Their defiance of the public health measures and apparent skepticism of the danger posed by COVID-19 is a wildly unpopular message. Recent polls consistently show that a great majority of the population either supports the health precautions in response to the pandemic, or believes that they don’t go far enough. This is why most of the protests failed to gather a significant number of participants, rarely surpassing a couple hundred.

Tens of millions of newly unemployed workers suddenly find themselves in a grim state of limbo, unsure of how they will pay the rent or make ends meet in the coming weeks. Many undoubtedly wish they could return to work. But the voice of these workers and their demands were notably absent from the protests.

So while some backwards workers may have participated in these reactionary gatherings, the basic class composition of these protests was plain for all to see. Far from reflecting the vast majority of ordinary workers, these protests primarily reflect the confusion and privilege of the small-scale exploiters.

Some in attendance held signs with slogans like “I need a haircut” and “Massages are essential,” expressing a frivolous dismissal of the health crisis, as well as a petty-bourgeois disdain for the lives of service workers. Others reflected the far right’s caricatured appropriation of the American Revolution. Flying the Gadsden Flag and holding signs with slogans like “Liberty or Death,” they may well get their wish if they continue flouting the measures necessitated by the pandemic. 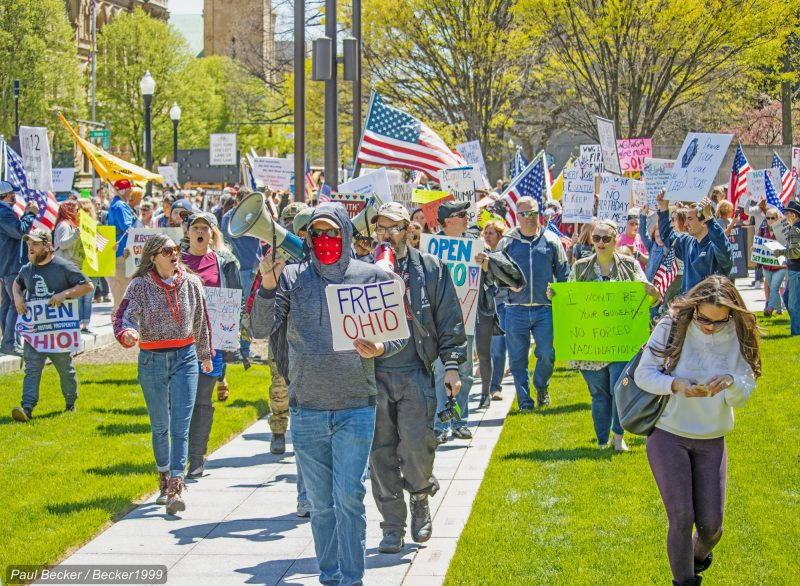 Far from reflecting the vast majority of ordinary workers, these small protests primarily reflect the confusion and privilege of the small-scale exploiters / Image: Becker1999, Wikimedia Commons

In fact, the New York Times quoted the speaker of the Michigan Assembly who defended the protests by saying “It’s not just Republicans … It’s a whole lot of people who own a small business and they’re unemployed and there’s no reason they can’t work.” This is the same demographic which makes up much of Trump’s most vociferous and virulent base, and the far right more broadly.

The capitalist class is faced with a desperate conundrum. As the Financial Times put it, their system is “going over an economic cliff right now.” The growth of unemployment claims and the extension of payouts is also worrisome to them. Above all, they want to restore “normality” and get workers back to generating surplus value at any cost. But this collides head on with the public health needs of the moment.

Despite it being in the long-term interest of the ruling class to get the pandemic under control, in the short term, those industries, cities, and states which reopen first will gain an economic advantage over the rest. In the logic of capitalism, particularly in its stage of decline, it is the short term which tends to win out. With their profits on the line, a section of the class is willing to experiment with mobilizing the far right as a battering ram against the working class. In fact, in the days following Trump’s tweets, references to civil war proliferated on right-wing forums.

On the other hand, the working class is objectively placed on the opposite side of the barricades. In Michigan, nurses and other hospital workers came out to stage counter demonstrations, physically blocking the advance of the reactionary parade of cars and marchers. The message of the workers was clear: public health should be prioritized over haircuts, massages, and the right of the capitalists to exploit labor as they see fit.

And it is not only healthcare workers who have raised their voices during this pandemic. The ranks of the newly categorized “essential workers”—who nevertheless endure low wages and precarious conditions—have begun to organize and move as a class, in a more militant and decisive way than anything we have witnessed in this country in decades.

Instacart, Amazon, Walmart and other large employers have faced strikes and other labor actions to demand and win raises, adequate safety equipment, and measures to reduce contact and the spread of the virus. Since the COVID-19 pandemic began, over 100 wildcat strikes have broken out, some winning their demands within hours. These strikes are a continuation of a rising trend that was emerging even before the pandemic. In the last two years, strike activity has surged, involving over half a million workers.

Many people are baffled by the scenes of these right-wing protests defying the best-practice social-distancing measures and threatening to prolong the public health crisis. But these protests are not merely an expression of Trump’s lunacy or the antics of his reactionary supporters. They are the expression of a deeper contradiction at the heart of a society organized around the narrow needs of the profit motive.

Far from expressing an innate desire for “liberty,” what these protests really express is the tyranny of the market. A rational society based on satisfying human needs would not sacrifice human lives in order to maintain the accumulation of wealth for a small minority. The inspiring scenes of healthcare workers standing up to gun-toting reactionary thugs is a graphic reminder that only the working class can put an end to the absurd contradictions of capitalism.

These phenomena are intertwined and are symptomatic of the growing polarization in society. That our society is in crisis and cannot continue as normal has been revealed more clearly than ever. This impasse has pushed certain sections of the petty bourgeoisie and declassed poor towards the right. However, for every person protesting for their “freedom” to die of this plague, there are many thousands of others who are striking for their lives and looking to socialism.

The disproportionate visibility of the far right is due to their powerful media and government sympathizers. But the working class is the majority class and our interests lie objectively to the left. Even in the face of media and government hostility, socialist ideas will continue to gain support among the workers. United by our common interests and fighting for a revolutionary program, a workers’ government could not only defeat COVID-19, but jettison the rotten corpse of capitalism and build a truly human society.