Details
In Defence of Marxism
24 October 2008

Colombia
Share
Tweet
A powerful general strike took place in Colombia yesterday, involving half a million workers with rallies ion more than 40 cities around the country. The regime is facing growing opposition in spite of the brutal methods that it uses to crush any form of militancy. 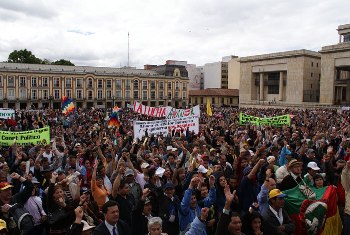 On Thursday, October 23, half a million Colombian workers took part in the one day general strike called by the CUT trade union confederation. The strike was particularly strong among state employees and teachers, but affected all sections of the economy. Massive demonstrations took place in more than 40 cities around the country with 50,000 gathering in the capital Bogotá.

The strike had been called to reject the declaration of the state of emergency (estado de conmoción interior) on the part of president Uribe in order to smash the drawn out strike of the workers of the judicial system. The reactionary government of Uribe is facing a growing wave of strikes and protests by workers and peasants. 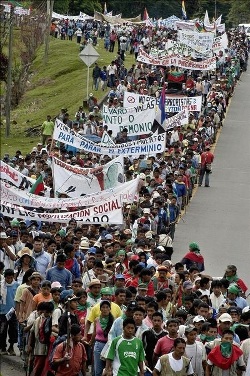 On September 15, 18,000 sugar cane cutters went out on strike, fighting for decent wages and working conditions. 32,000 workers of the judicial system also came out on strike on September 2, to which now we have to add strikes by teachers, transport workers, workers of the National Census Office, etc. Tens of thousands of indigenous peasants have also been in struggle since the middle of October for land reform and respect for their rights. Harsh government repression has already caused two deaths in this struggle. Now tens of thousands of indigenous peasants have started a march to El Valle to demand their rights. The movement has already spread to 16 of the 32 regions of the country and is growing all the time despite government repression.

The revival of the workers’ and peasants’ movement is remarkable in a country where the capitalist state is acting in unison with the paramilitary death squads, using legal and illegal violence, assassinations (41 trade unionists have been killed already this year), against any attempt by workers and peasants to organise and defend their rights.

At the same time the state intelligence services have been exposed in a scandal which forced the resignation on October 23 of the head of the DAS (Administrative Security Agency), Maria del Pilar Hurtado. She has been accused of signing orders to carry out surveillance of opposition MPs, including Alexander Lopez, who has been involved in supporting the movement of the sugar cane cutters and the indigenous peasants. The DAS head’s orders include gathering intelligence on contacts between opposition MPs and “people who could serve as witnesses in testimony against the government.”

Hurtado was only appointed by Uribe in August 2007 to replace Jorge Noguera, who was removed in 2005 in another scandal in which he was accused of passing intelligence information to paramilitary groups.

After a period in which the Uribe government had apparently conquered public opinion on the basis of having dealt serious blows against the FARC, he now is facing a growing movement of workers and peasants.

These pictures are from an article on the website of Venezuelan Radio Mundial. 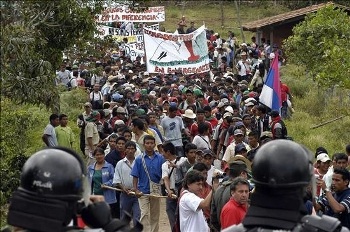 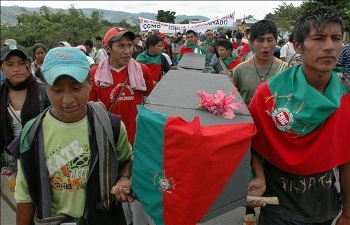 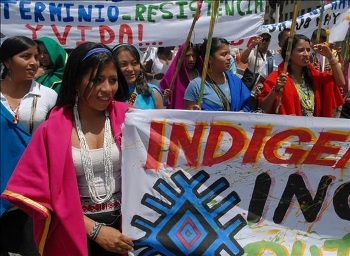 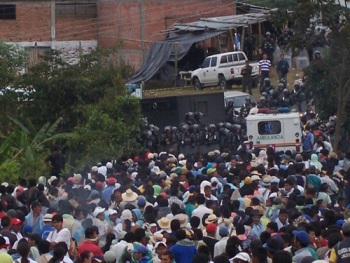