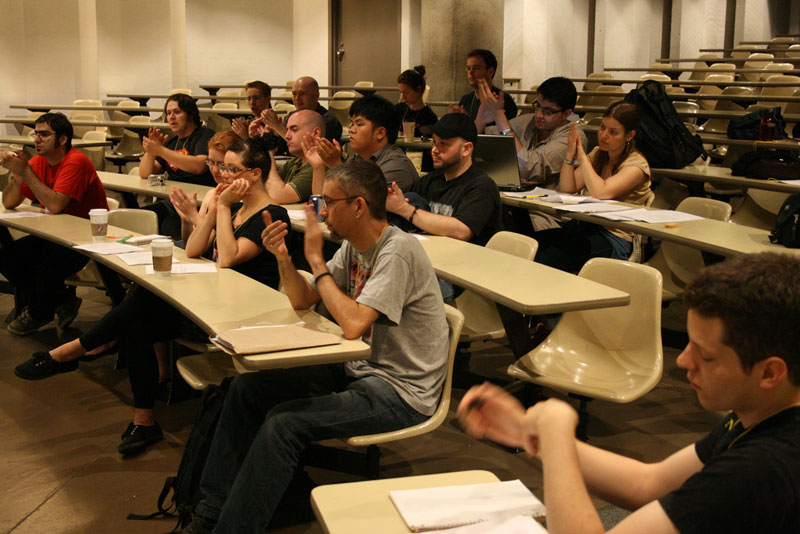 On the weekend of June 5-7th, working class activists from across Canada travelled to Montreal to discuss the way forward for Canadian revolutionaries. Representatives of Fightback from BC and Ontario joined, together with the militants of the International Marxist Tendency of Quebec, in an incredibly enthusiastic meeting of solidarity and struggle.

The conference was roughly double the size of last year’s, indicating the thirst for Marxist ideas by Canadian workers and youth. The enthusiasm of the conference came as a result of the recent steps forward for the forces of Marxism fighting the Canadian state. The conference was prefaced by a public meeting where the Marxists in Quebec launched La Riposte, a new French journal that will help spread the ideas of Marxism to francophone workers and youth. In addition to this advance, Fightback in English Canada has just moved to a colour monthly and is gaining a wider and wider circulation.

Joel Bergman of La Riposte’s editorial board opened the conference by outlining the gains made by the Marxists in Canada since the launching of L’Humanité (Fightback’s predecessor) in 1999. From being established in Lloydminster, on the Alberta/Saskatchewan border, Fightback is now read and sold across the country, and is an important organizing tool for many activists.

Jorge Martín, an invited guest and a leading international member of the International Marxist Tendency, proceeded to talk about World Perspectives and the general crisis of capitalism. Jorge emphasized how it was the Marxists who had been able to predict the current economic crisis while bourgeois economists and governments were caught completely unaware. Even now, the bankers and bosses are incapable of providing any solutions to the crisis.

The depth of this crisis has not been seen since the 1930s and is affecting every single corner of the world. Jorge explained that it would be too simplistic to say that the capitalist crisis would have an immediate impact on the consciousness of workers; even during the Great Depression, it took up to four or five years for the most militant struggles to arise. But, we can be sure that workers will begin to arrive towards radical conclusions, evidenced by the wave of factory occupations in the most advanced capitalist countries such as Britain, France, the United States, and Canada. Jorge made special mention of the Venezuelan Revolution and the challenges facing it because of the current capitalist crisis. With the collapse of the price of oil, it would become increasingly difficult for the Bolivarian government to continue to provide significant reforms for the Venezuelan people without expropriating the oligarchy and finally breaking with capitalism.

Many comrades intervened following Jorge’s presentation. Among the interventions was how the economic crisis was also reflecting itself politically in a crisis of bourgeois democracy. The recent scandals based upon British MPs’ spending habits, along with the historic low voter turnout for the recent European Parliament elections, are linked to the general mistrust that workers have for the entire capitalist system. They realize that none of the bourgeois parties represent the needs and aspirations of workers; the needs of workers can no longer be provided for under capitalism. 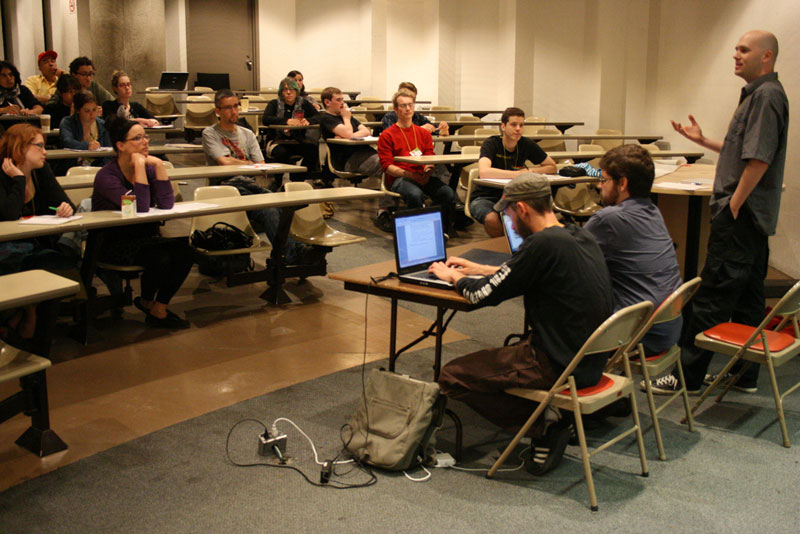 Alex Grant, editor of Fightback, gave the next presentation on Canadian Perspectives Alex Grant, editor of Fightback, gave the next presentation on Canadian Perspectives (the draft version has already been published online). Alex began by stating that capitalism had failed and an increasing number of workers and youth were beginning to realize this. Contrary to what the bosses were telling Canadians less than a year ago, the global capitalist crisis is hitting Canada hard, particularly in Ontario. As in Europe, the economic crisis is being reflected within the political system, as well. The actions that the bosses are forced to take to restore their rate of profit—factory closures, attacks on the social wage, and privatization— would force the working class to struggle. On the 90th anniversary of the Winnipeg general strike we should not be surprised to see new general strikes arising in response to government and corporate attacks. What is lacking is a working class leadership prepared to aid the workers in defending their standard of living. Jack Layton’s NDP was prepared to dump its reform agenda for the Liberal coalition, and Ken Lewenza of the Canadian Auto Workers has thrown away two generations of gains without a fight. The crisis of capitalism first manifests itself as a crisis of reformism. Those who are not willing to break from capitalism are forced to attack the workers. In this environment, the ideas of Marxism will again come to the fore and Alex appealed to all those present to step up the work of reaching out to build the forces of Marxism. 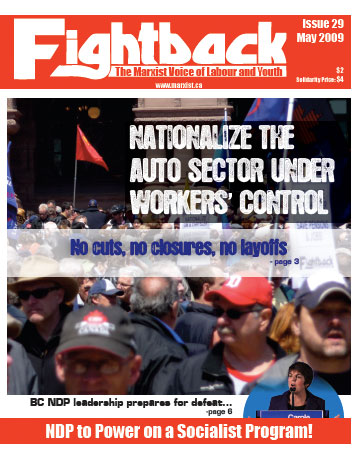 Fightback in English Canada has just moved to a colour monthly and is gaining a wider and wider circulation. The first day of the conference wrapped up with Camilo Cahis, editorial board member of Fightback, introducing a discussion on the future of China. Camilo stated that in his opinion, the process of capitalist restoration in China was too far gone to be simply reversed by the Chinese Communist Party bureaucracy, even if it had an inclination to do so. Camilo explained the historical processes of the CPC bureaucracy and how the bureaucracy’s interests have led to a curtailing of all of the gains of the Chinese Revolution. Since the 1970s, the leadership of the CPC has actively supported market reforms and although they did not necessarily desire a return towards capitalism, the inherent logic of these reforms has led to precisely that. Although a setback, China’s return to capitalism has also created the world’s largest working class and developed China’s means of production. Unlike in 1949, a revolution in China today would be much less likely to be guided down the road of bureaucratic deformation. As well, given China’s important role in the global economy, a successful Chinese revolution today would have a much greater global impact than the 1949 revolution. The presentation led to some very lively, but civilized, debate amongst the conference participants about the class nature of the Chinese state, as well as how Marxists tend to understand and analyze society.

The second day of the conference dealt primarily on how to grow Marxism in Canada and how to reach out to more workers and youth in this pivotal time. As with the previous day, a large number of participants intervened on their own experiences within their respective workplaces and cities. The common consensus was that young workers, in particular, are fed up with the answers (or lack thereof) being provided by the bosses, the media, etc. They are hungry for ideas that will help in eliminating the capitalist system. The comrades reacted enthusiastically to the goal of getting 100 active supporters by next year. Those present also responded positively to the press fund appeal—$9000 is what is needed to buy a colour printer to popularize Marxist publications in Canada. Due to savings, such a machine would pay for itself in less than four years. The attendees managed to raise an impressive $4500 towards this goal and then committed themselves to go back to their areas to raise the remaining amount over the coming months.

Following from the establishment of a French Marxist journal in Quebec, there was a standing ovation when the francophone Marxist Nicholas Richer committed to bring dozens of francophone workers and youth into the Marxist fight. Far from being a turn-off, the Marxist idea of defending the right to self-determination, while emphasizing the unity of the workers against the capitalists of all stripes, is attracting the best young militants. The weekend ended with a stirring singing of the Internationalé in English and French, with a few other languages thrown in for good measure!

This conference bristled with youth, militancy and confidence in the victory of the working class. 20 years ago, the fall of the Berlin Wall was supposed to have been “the end of history”, and the death knell of Marxist ideas. The enthusiasm and dedication displayed this past weekend belie that premature epitaph. Today, more than ever, Marxist ideas are the only ones that speak to workers and youth, and to all of those committed to overthrowing this rotten system.