Details
In Defence of Marxism
17 December 2008

The passed year has been one of tumultuous events, and for the International Marxist Tendency (IMT), it has been one of intense activity. We are asking our comrades, supporters and readers of marxist.com around the world to help us continue our work by donating to money this winter.

The passed year has been one of tumultuous events. The wars in Afghanistan and Iraq were accompanied by a defeat for US imperialism in the Caucasus. The revolution in Latin America has seen many new developments in Bolivia, Colombia and, of course, Venezuela.  The economic boom, prolonged as it was by the expansion of credit, came to an end and turned into its opposite: a crisis for world capitalism, something that we have been arguing would happen for several years (see, for example: World Perspectives 2006). 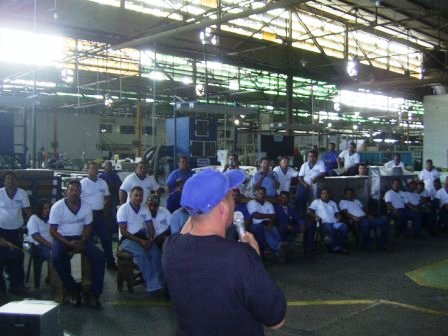 For the International Marxist Tendency (IMT), the year has been one of intense activity. In the beginning of the year, we supported the Pakistani Marxists in their election campaign. During the summer, our Italian supporters in FalceMartello conducted an important struggle and won an important victory at the congress of Rifondazione Comunista, which was later followed by a similar success for La Riposte in the French Communist Party.  In Brazil, the Marxists of Esquerda Marxista managed to get elected to several local councils, as the Marxists of the PT. The CMR in Venezuela has participated actively in the building of the PSUV and its youth organization, fighting in both organisations for a genuine socialist programme and against the right wing bureaucracy.  They also continue to participate in and support the struggles of Venezuelan workers for nationalisation under workers control, including the recent occupation of Vivex, where the Marxist tendency is playing a leading role.

The congress of IMT this summer was a huge success: 350 people attended from 27 different countries and four new sections were unanimously accepted as members: Brazil, Switzerland, Iran and El Salvador. This, as well as the growth of already existing sections, represents a great stride forward for the IMT and provides a base for a leap forward in the coming period.

The deepening crisis of world capitalism has since had a major effect among the youth. In many European countries the youth are conducting struggles against the Bologna process. In Spain the student strikes were led by the Marxists of Sindicato de Estudiantes and In Defence of Marxism has covered the movement of young people in Germany, Italy  and Greece  as well. In response to the crisis we published the IMT Manifesto with many demands that correspond to the ones raised by students and young workers in these struggles.

We have throughout the year had around 847,000 visits to marxist.com, showing the continued relevance of Marxist ideas. In November, our analysis of the US elections broke the record for daily visitors, with 7,500 in one day. The large number of visitors also forced us to upgrade our server in the spring.

All the work that is being put into the site does, of course, not come for free. Neither do the numerous trips that we have to pay for, including contributing to the tickets of comrades from Latin America, Asia and Africa to attend our congresses and schools. We are therefore asking our comrades, supporters and readers of marxist.com around the world to help us continue our work by donating to money this winter.