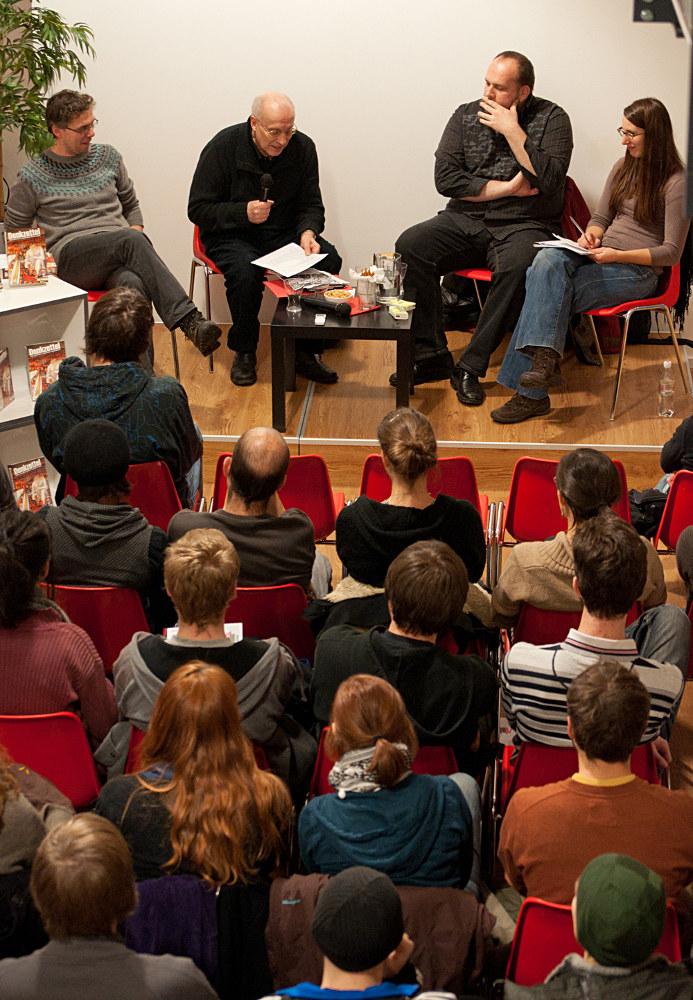 From 7-11 December the Austrian Marxists organised a speaking tour with Hubert Prévaud (CGT Airbus Toulouse and member of the Editorial Board of La Riposte). Hubert spoke in several public meetings on the protest movement against the pensions „reform“ in France.

The first meeting took place in Vienna in the new bookshop of the ÖGB with some 60 comrades present. In this meeting we also presented Denkzettel the new edition of “the best German compilation of Trotsky's writings” (Junge Welt). This book we published this summer together with Helmut Dahmer, the editor of the Trotsky's writings in German. He also chaired the meeting and gave a short explanation of the capitalist crisis and the importance of Trotsky and the project to publish his writings today. After his introduction, Gernot Trausmuth (editor of “Der Funke”) argued why this selection of texts and articles written by Trotsky more than 70 years ago are still very relevant today. Denkzettel is full of important starting points for a study of the Marxist method to analyse bourgeois society and to lead the revolutionary struggle to overthrow capitalism. This book is a must-have in the bookshelves of every revolutionary.

Then comrade Hubert Prévaud gave his lead-off on the recent events in France, drawing a balance-sheet of the struggle against the pension reform from a Marxist point of view. The main theses of his speech are summed up in the article French pensions: first balance sheet of a massive struggle.

In all the meetings these ideas raised a lot of questions and interesting discussions on the role of trade unions and the methods of the class struggle.

The next day, a holiday, Hubert went to Bregenz (Vorarlberg). The Socialist Youth Vorarlberg organised a meeting in the hall of the ÖGB. 30 comrades, half of them apprentices and young workers, attended the meeting and discussed with Hubert the lessons of the struggle in France. The meeting was characterized by a very enthusiastic spirit. For all those present it was clear that such international experiences are vital for the building of strong militant left-wing of the Austrian labour movement. In the debate one of the central issues was the question of the need to root Marxism again in the workplaces. 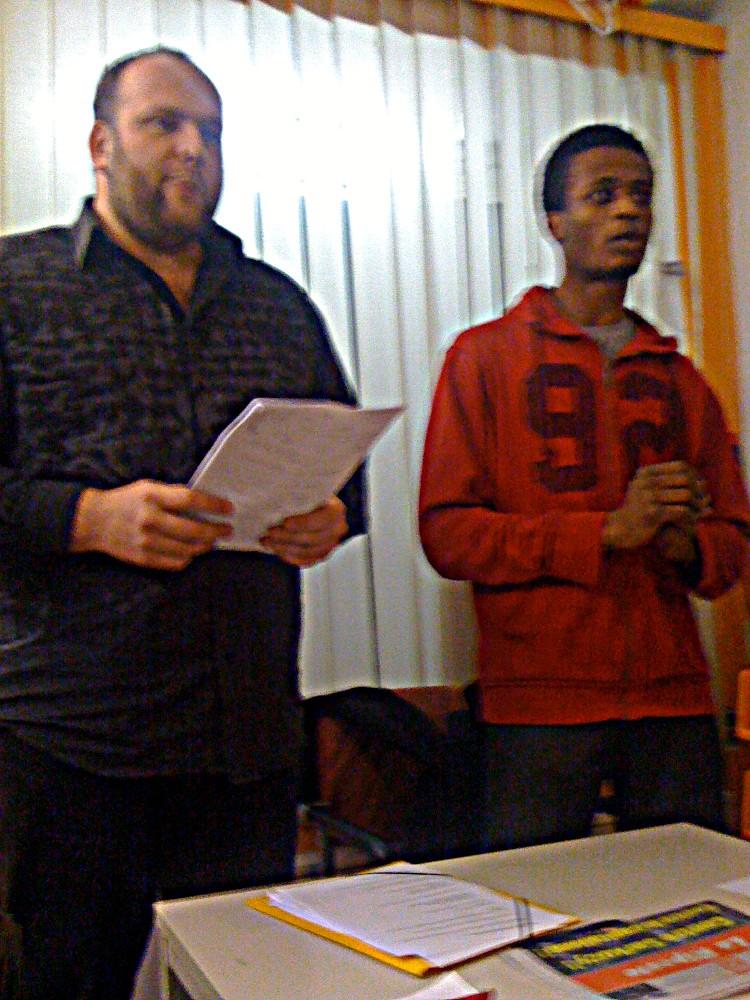 Hubert Prévaud (left) The next stop was Graz where Hubert was invited by the Communist Party (CP), which has its stronghold in this region and is even present in the regional parliament. The meeting was organised as a debate between him and Klaus Breuss (ÖGB Styria) and Robert Krotzer (chairman of the YCL). 25 comrades mainly from the Communist Youth and the CP turned up. The meeting lasted more than 3 hours with a lot of people intervening and asking questions. One of the main points in the discussion was on the question of the role of the trade unions in the struggle against cuts. Comrade Breuss said that we need fighting trade unions but he also defended that the unions should hold on to social partnership mainly because this was in the interests of the weaker sectors of the working class. The audience criticized him very sharply for this argument. A young student worker explained why from his experience in the factory it need democratic unions and not a left wing split from the unions as another comrade had argued. One man asked Hubert why he is still working in the CPF although this party is in a deep crisis. Hubert explained very well what the historic role of the CPF is and that it has big reserves in society, especially among trade union activists in the CGT. French history has shown that in revolutionary upswings the CP always has become a mass force even if it had been reduced to a small force in the period before. On the other hand the relatively strong groups of the “radial left” (NPA, LO) do not play an important role once the masses start to move because they do not have real roots in the working class. On the question if in Austria it would be better to have instead of a unified trade union federation a split of the movement along political lines, he answered that we should not make the mistake to idealise the trade unions in countries like France. Also there the trade union bureaucracy is eager to negotiate with the capitalists and the government and does not want to struggle. The key to the trade union question is not splitting the unions but to fight for a democratisation of the unions. The meeting ended with the singing of the “Internationale” but afterwards the discussions still went on for hours. This meeting was a big step forwards in the process to build a Marxist current in the labour movement of this region.

The next day we went to Upper Austria. At short notice we got an invitation by the Socialist Youth in Wels which was eager to hold a meeting with Hubert. Present where school student activists who had organised a school student strike some weeks ago against cuts as well as the shop steward of the railway workers and the regional secretary of the ÖGB. Both are active in the mobilisation for a big demo in Wels against cuts and for a programme of taxing the rich. There where a lot of interesting questions and we hope that this meeting was a small contribution to building of a strong left wing in the labour movement in this important industrial town.

In Linz “Der Funke” organised a meeting in its office and more than 20 comrades turned up – among them activists of the Socialist Youth, the SPÖ-Left and a shop steward from Promente OÖ where the workers are protesting against cuts and redundancies with demonstrations and even a two-days-strike.

The tour ended with a workshop at the seminar of the trade union youth in Salzburg where a comrade of “Der Funke” is active. Also here Hubert's analysis provoked a very intense discussion over trade union work under the conditions of capitalist crisis.

All in all the speaking tour was a success. The experience that comrades from other countries like France made in the class struggles of the last months are full of rich lessons for all of us who see their job as transforming the organisations of the Austrian labour movement into fighting organisations. And this will be decisive to defend the interests of the working class against cuts. In this sense the discussions with comrade Hubert Prévaud brought us one step forwards.