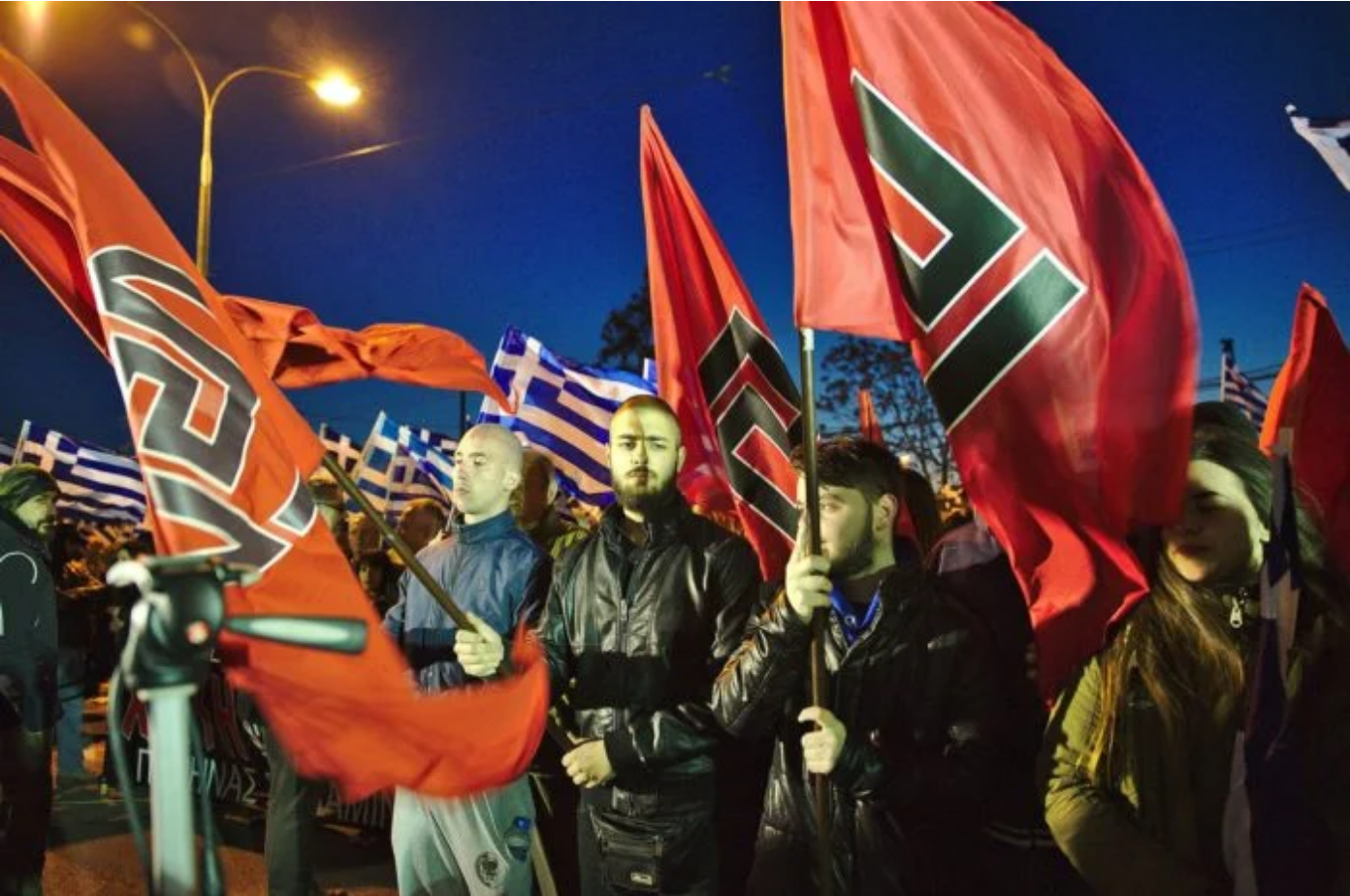 In recent days, Greece has witnessed a wave of murderous fascist attacks against leftist organisations. This is the most intense violence since 2013, when the murder of rapper Pavlos Fissas sparked a mass anti-fascist movement and the government cracked down on neo-Nazi party Golden Dawn. This culminated in the banning of the party in 2020.

However, as we warned at the time, legal action by the bourgeois state will not stop the fascists, who enjoy the protection of the police and the connivance of right-wing politicians and media. The youth and workers can only rely on their own forces to combat this menace.

In the last week of September, neo-Nazi youths wielding clubs and knives and hurling Molotov cocktails attacked a leftist gathering at a vocational training school in Stavroupoli, near Thessaloniki. Police stood by as the fascists went on a rampage within the school premises. The following day, a demonstration against the attack was also assaulted.

In response, the right-wing New Democracy government issued a statement condemning the neo-Nazi violence... and the anti-fascist movement against it! As public pressure built up, the police arrested a dozen neo-Nazis in Thessaloniki and requisitioned several weapons cachés, including pistols and a rifle.

On Sunday 3 October, neo-Nazis armed with sticks set upon a rally organised by the anti-fascist organization KEERFA in the Athenian suburb of Nea Irakleio, to commemorate the anniversary of the banning of Golden Dawn. Four people were injured. Police reportedly took over 20 minutes to arrive at the scene.

The following day, members of the Greek Communist Youth (KNE), who were putting up anti-fascist posters, were attacked by a neo-Nazi gang in the Thessaloniki neighbourhood of Ilioupoli. But the fascist provocations are once more leading to a massive response. On 7 October, thousands of youths and leftist activists took to the streets across the country to protest these provocations.

Golden Dawn openly applauded the fascist attack at Stavroupoli and egged on its supporters. This neo-Nazi organisation was formally banned in October 2020 and its top brass is in prison. However, the party has been allowed to re-organise as the authorities are loath to enforce the ban. Indeed, despite being an illegal organisation, Golden Dawn still has an office in Thessaloniki!

Moreover, a string of new fascist groups has cropped up in recent months, such as the Sacred Band and Pro-Patria. They are also connected to the recent spate of violence.

As we’ve seen elsewhere, sizable anti-vaccine rallies in Greece provided a convenient cover and rallying point for fascist activity. The movement against vaccines is extremely heterogeneous. It has been driven by social malaise and mistrust of the capitalist state, and includes confused individuals who could potentially be won over by the revolutionary workers. But the lockdowns hit some layers, like small property owners, particularly hard. These desperate middle-class layers, as well as criminal elements are fodder for fascist gangs.

The proliferation of neo-Nazi groups is undoubtedly connected to the anti-vaccine movement. However, it is important to note that these groups represent an extremely small minority of the population. The active core of these gangs comprises only a few hundred or at best a few thousand individuals, albeit well-organised and financed and with powerful sponsors in the state apparatus.

The human scum that form the core of these gangs could be smashed and swept away with ease if met with the full strength of the working class.

Fascism and the capitalist state

It is abundantly clear that these gangs enjoy sympathy from sectors of the police, who were clearly passive in the face of these recent attacks. It is no secret that the Greek police have close connections with the far right.

Moreover, electoral data suggests that, in 2015, as many as 40-50 percent of police officers voted for Golden Dawn. The reactionary nature of the police reflects their social function as the armed henchman of the ruling class.

The government used the excuse of the pandemic to give more authority to the police to repress protest, which increased their confidence to act with impunity. And given their sympathy with the fascists, the police are inclined to see the latter as useful collaborators in their repressive duties, the fascists being unencumbered by the legal niceties that occasionally limit how “thorough” the police can be. 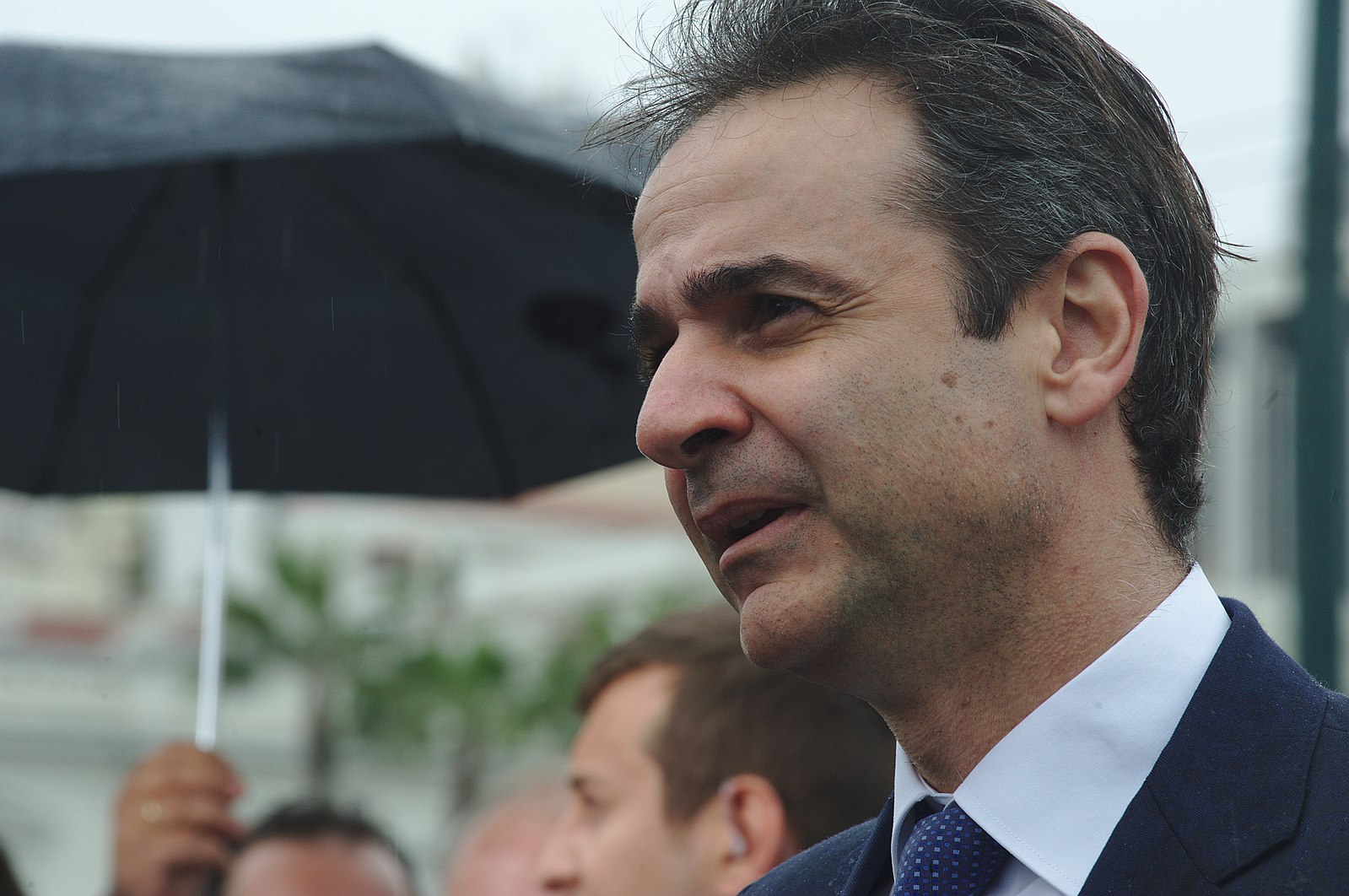 The ruling class and its representatives in government regard the fascists as a useful reserve weapon for emergencies, although they had been forced to reign these mad dogs in in recent years out of fear of provoking a mass working-class response. / DTRocks, Wikimedia Commons

The ruling class and its representatives in government regard the fascists as a useful reserve weapon for emergencies, although they had been forced to reign these mad dogs in in recent years out of fear of provoking a mass working-class response.

As noted above, the Mitsotakis administration drew an equivalence between the neo-Nazi attacks, and the defensive actions and counter-protests of the anti-fascist movement. The bourgeois media sings the same song, generally depicting the violence as clashes between gangs of youth hooligans, consciously blurring the political issues at play.

Moreover, Mitsotakis and the “respectable” conservative politicians of New Democracy are indirectly responsible for the rise of fascist violence.

They inflame nationalist sentiments, blame social problems on migrants and other vulnerable scapegoats, and pander to religious hatred in order to distract the population from their own failings and that of the capitalist system they represent.

As the crisis of capitalism deepens, the ruling class increasingly stirs from the bottom, dredging up vile prejudices to divert the rising anger and discontent in society into ‘safe’ channels. This hateful filth creates fertile soil for fascism to grow.

The Greek ruling class burned its fingers with Golden Dawn in 2013 and decided to turn against it. The crackdown on the party was initiated by the right-wing government of Antonis Samaras.

But this was not due to their ideological opposition to fascism. Rather, Golden Dawn had become a dangerous liability. Their provocations sparked a powerful moblisation by the working class and youth, with revolutionary undertones, after the murder of Pavlos Fissas.

For the time being, the New Democracy is being cautious and keeping a certain distance from the fascists. For instance, it has prosecuted some of the culprits of the attack in Stavroupoli. Mitskotakis has also dismissed MP Konstantinos Bogdanos, who represents the most reactionary tendency in New Democracy, closest to the extreme right.

These moves are a purely tactical calculation, condemning the fascists in words while generally treating them with a light touch. Under certain conditions, if the class struggle were to intensify, the state would have no qualms about mobilising the fascists in earnest to crush the workers and youth.

The timing of these attacks is no coincidence – they are testament to the tumultuousness of the period Greece has entered.

The betrayal of Alexis Tsipras after the referendum of July 2015 confused and demoralised the Greek working class. There was no effective revolutionary opposition to this betrayal, either within or without Syriza, as the party’s left-wing faction largely gave up without a fight, and the Communist Party at that time adopted a sectarian position.

Given this situation, an epoch of relative social peace followed, punctuated by some important - though isolated - struggles. This is beginning to change.

Last year, Greece witnessed powerful movements by high school and university students against Mitsotakis’ cuts to education and his repressive, anti-democratic legislation. Indeed, the mass rallies in celebration of the banning of Golden Dawn in October 2020 revealed the newfound militancy of the youth.

More importantly, some sectors of the working class are entering the fray anew, as evidenced by the militant strike of delivery drivers on 24 September. In its attitude towards the fascist gangs and grouplets, the Greek ruling class has an eye to the future and the rising class struggle.

Rely only on your own forces!

The banning of Golden Dawn by the bourgeois tribunals in October 2020 was rightly welcomed as a victory of the anti-fascist movement. However, as we warned at the time, certain dangers underlay this success.

Firstly, they could generate the impression that the bourgeois state can curb the fascist menace. As recent events show, this is not the case. The fascists have been allowed to reorganise and regroup, resuming their violent activities. Even students on their own campuses are not safe.

Secondly, we warned the bourgeois state could use the trial against Golden Dawn to enhance its credentials as a “neutral” arbiter of social conflict, and as a counterbalance to “extremism” - of the far right and the far left. This has played out with the repression meted out in recent months by Mitsotakis against leftist students and the anarchists.

Only the independent movement of the youth and the workers can destroy the fascists. All class fighters, regardless of their tendency and party affiliation – communists, anarchists, student activists, trade unionists, etc. - should be rallied for the counter-offensive.

We are all threatened by the Nazis, and as such we should fight them shoulder to shoulder. Self-defence committees should be organised by the workers’ organisations, and connected to the broader movement for social and labour rights. Above all, they should be armed with an anti-capitalist programme that offers a way out to the exploited and oppressed masses.

Such a programme would also undercut right-wing demagoguery by explaining the real cause of all the ills of society, as well as a real solution. Organised on this basis, the vanguard of the youth and the working class could smash the fascists to smithereens.

The Greek workers and youth are getting back on their feet after a prolonged hiatus. The defensive struggle against the fascists should become a springboard to go on the offensive and resume the revolutionary struggle against the capitalist system itself, which was derailed in 2015 by the betrayals and disappointment of reformism.