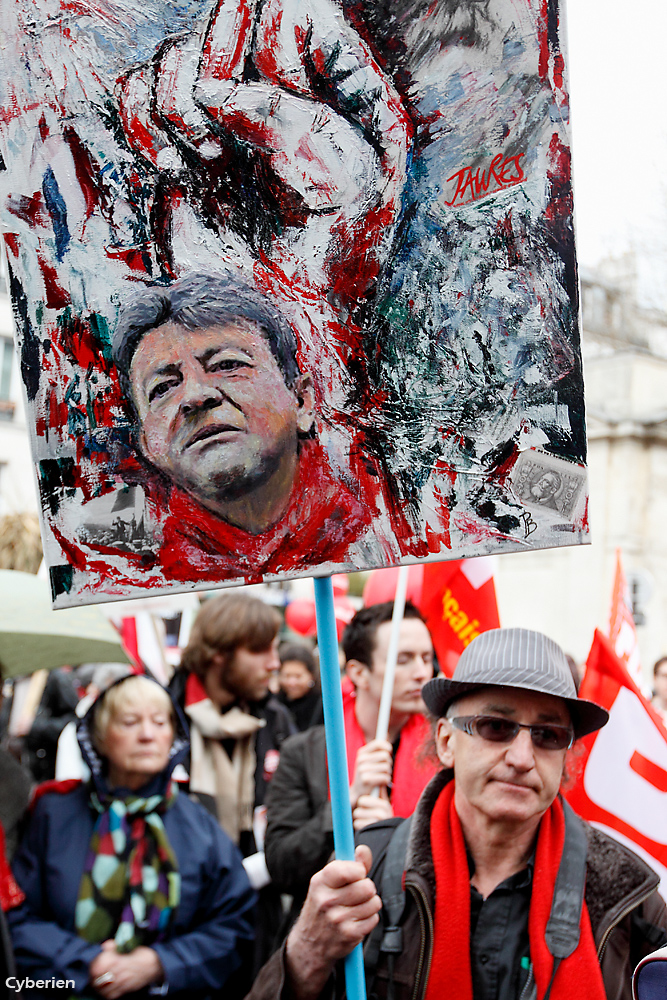 The most striking feature of the presidential election campaign in France is the massive support shown for the Front de Gauche (Left Front) under the leadership of Jean-Luc Mélenchon. Long before the campaign was really underway, there were clear signs that the most conscious and active layer of the working class was mobilising around the Front de Gauche.

On January 14th, for example, 6,000 workers and youth turned out to hear Mélenchon in Nantes. The official launch of the campaign in Paris, on March 18th – the anniversary of the Paris Commune – took the form of a mass demonstration of more than 100,000 people on Bastille square. The meeting organised in Toulouse drew anything between 45,000 and 60,000 participants. Something like 300,000 copies of the brochure outlining the policy of the Front de Gauche have been sold.

France has never seen such massive enthusiasm for an election campaign since the historic victory of François Mitterrand in 1981. Opinion polls credited Mélenchon with between 4% and 7% towards the end of last year. But he is presently credited with between 13% and 15%. Between now and the first round of the elections on April 22nd, his ratings could well increase to even higher levels.

The Front de Gauche is essentially an alliance between the Communist Party (PCF) and the Parti de Gauche organised by Mélenchon and his supporters after their break with the Socialist Party. The Parti de Gauche is weaker than the PCF in terms of membership and apparatus, but it is steadily growing in both support and membership.

The phenomenal progress of the Front de Gauche is taking place against a background of profound social and economic crisis. French capitalism is in an impasse. The decline of industry and trade has led to a trade deficit of 75 billion euros. Unemployment has risen sharply. Some 11 million people are living in various degrees of poverty. In all aspects of life – health, education, wages and working conditions, housing, pensions – society is being thrown backwards. The rule of the banks and capitalist interests in general is ruining the state and the economy.

Among wide layers of the population, there is a growing consciousness that this crisis is qualitatively different to those of past decades. Sarkozy stands at the head of a government by the rich and for the rich, constantly attacking the rights and livelihoods of the working people. In 2010, he launched a vicious attack on workers’ pensions, pushing through his “reform” in spite of massive opposition. He has repeatedly used racist propaganda as a means of diverting attention from the real causes of the crisis – and also from the long series of financial scandals involving members of the government.

The success of the Front de Gauche shows a shift of the movement to defend pensions in 2010 – which ended in defeat – onto the political plane. But that does not explain everything. In the previous presidential elections, in 2007, in spite of a movement involving millions of workers against the “First Employment Contract” (CPE), the PCF candidate Marie-George Buffet failed to attract significant support, winning only 1.93% of the vote. The raising of workers and youth to their feet on such an impressive scale in the course of the present campaign is due to the militant policies set out in the programme of the Front de Gauche, but also to the outstanding personal role and qualities of leadership displayed by Jean-Luc Mélenchon himself. In spite of the weaknesses in the programme of the Front de Gauche – and there are serious weaknesses – here at last we have a candidate who has clearly identified the capitalist system as being responsible for the crisis, who has staunchly defended the interests of working people against the banks and the Stock Exchange, who has demolished the racism and demagogy of the National Front – to the point of reducing Marine Le Pen to a state of flustering and humiliated silence during a TV debate – who has starkly exposed the pro-capitalist policies of the socialist candidate François Hollande, and who, as a talented orator and propagandist, has striven to give ordinary working people a sense of their own power once they decide to act. His main slogan – Take the power! – sums up this approach, which has undoubtedly enabled Mélenchon to connect with the militant mood of trade unionists, communists and left-wing socialists, and, through this “active” layer, to reach out towards a considerable section of the working people as a whole. 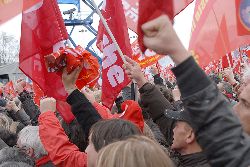 The Internationale being sung at 18 March rally. Photo: KhomilleThese developments confirm an important aspect of the perspectives worked out by the Marxists around the communist journal La Riposte in the preceding period. La Riposte consistently explained that whatever support might be picked up by various leftist and sectarian groupings, the working class, beginning with its most politically advanced and active layers, would turn to its traditional political and trade union organisations. For many years, some fairly sizeable sectarian groups gained support on the basis of the drift to the right of the leaders of the mass organisations. The supporters of La Riposte, they said, were wasting their time trying to defend revolutionary ideas in “dead” organisations such as the PCF. Had not the PCF leadership supported massive privatisations under the Jospin government? But now we see how things have developed. The ranks of the PCF rejected the most blatant pro-capitalist elements within the party (Hue, Gayssot, Braouezec), who have now broken with it, while the Parti de Gauche, as a left-wing split from the Parti Socialiste, has formed an alliance with the PCF. In fact, Mélenchon has been defending policies to the left of the PCF leadership, and this has led to the almost complete organisational and moral collapse of all the sectarian groupings. The Nouveau Parti Anti-Capitaliste (NPA), which claimed 9000 members a couple of years ago, has now practically disintegrated.

Whatever the result for the Front de Gauche on April 22nd, it is clear that the alliance can become a powerful pole of attraction for workers and youth looking for an alternative to capitalism. If François Hollande wins the presidency, he will apply austerity policies similar to those of Sarkozy, and probably even worse. He has made it clear that the stock markets have “nothing to fear” from a government under his leadership. Under these conditions, the Front de Gauche alliance would be able, potentially at least, to develop a powerful mass basis.

However, there are several possible variants in the perspectives for the alliance. In spite of the departure of the most outspoken pro-capitalist elements in the PCF leadership, some of the present leaders are leaning in the direction of participating in a socialist government, although they dare not say so openly at the present time. It is significant that whereas Mélenchon has ruled out participation, the PCF leadership has remained obstinately silent on this vitally important question. Many of the PCF leaders see the Front de Gauche as a first step towards the liquidation of the PCF. The Parti de Gauche, also, is far from being politically homogenous. Many “moderate” and opportunist elements only joined the new party in the hope of advancing their careers, whereas the ranks are mainly composed of militants who see the party as a means to fight against capitalism. At the heart of all these issues is that of the programme of the alliance and of the parties within it. Whereas the present programme of the Front de Gauche contains all the basic elements of a serious fighting programme on questions such as wages, pensions, housing, health, education, workers’ rights and many other important issues, it falls short of a general programme of socialist expropriation of capitalist interests. Taken as a whole, therefore, it amounts to an attempt to abolish the consequences of capitalism without abolishing capitalism itself.

In the years that lay ahead, all these questions of policy, strategy and organisation will be thrashed out in the heat of the class struggle. France, like the rest of Europe, is on the threshold of great events. Sarkozy will hopefully be defeated and consigned to the dustbin of history. But he and his party are only the representatives of a class and a system. Whatever government is in power, capitalism can only bring decline and impoverishment for the mass of the population, while protecting and enhancing the privileges and wealth of a parasitic minority. No social order can continue along this road without preparing its own downfall.