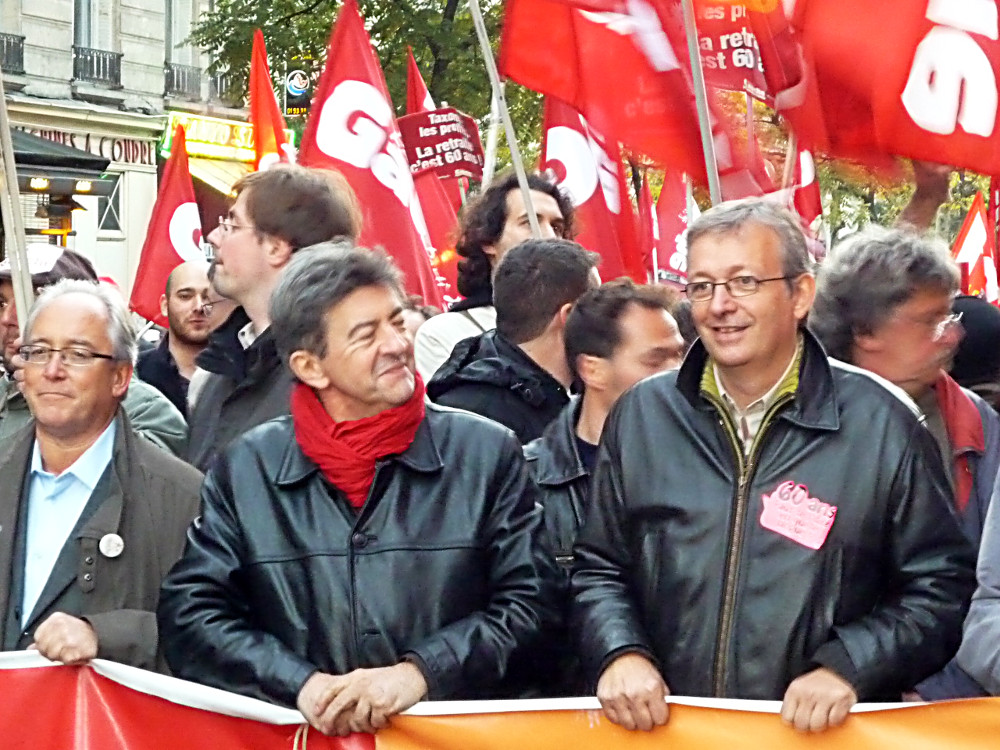 The designation of Jean-Luc Mélenchon as the presidential candidate of the Left Front, following the vote of the Communists, puts an end to more than two years of work by the leadership of the Communist Party to achieve this result.

This intention was unveiled at the end of 2008, when Mélenchon left the Socialist Party and the leadership of the Communist Party announced, at the same time, the creation of the Left Front, to which the Left Party immediately rallied. However, the party leadership had long pretended to have no position on the issue of presidential candidacy. It wanted to quickly take the rank and file of the party by surprise.

The 36th congress was rearranged for 2012. Then, less than two months before the National Conference, the party leadership expressed its preferences for Mélenchon, quickly announced the foundations of a legislative agreement, and finally explained: “we no longer have time. There is only one agreement, only one sure way: Mélenchon.”

These manoeuvres have not gone unnoticed, including amongst the comrades who voted for Mélenchon. They will have consequences within the party. There will without doubt be comrades who refuse to take part in the campaign. But the large majority of Communist Party members will take part, not only in order to achieve the best result possible, but especially in order to build the party. This will also be the position of La Riposte.

The main challenge of this campaign is the necessary defence and promotion of an alternative to Capitalism in crisis, and the strengthening the Communist Party on this basis. La Riposte, like many comrades, fought for a Communist Party candidate, but the selection of Mélenchon will not stop members from leading a vigorous campaign to develop the party and spread its influence.

The debate on nominations now being closed, the attention of the Communists will focus even more on the programme. This is very good, because the programme is the decisive question. However, there is immediately posed a problem of method. Before discussing a “shared” or common programme with other organisations, the French Communist Party should have discussed its own programme, which should have been submitted for democratic debate amongst its own members. This is not what has happened with the elaboration of the “Popular and Shared Programme (PSP).”

Weeks before the National Conference, Communist Party members received a document entitled “What We Want”, which was presented as the contribution of the CP to the PSP. But this text was not open to amendments. The members did not have any means of modifying its content. Besides, they did not even have the time to really discuss it, in the wards and branches, because it was very quickly replaced by the “latest version” of the PSP. This had been announced, long before, as a collective work to involve large sections of youth and workers; a programme that was supposed to “issue from the masses”. But the participation of the masses in the elaboration of the PSP has remained entirely theoretical, as was predictable. Incidentally, members were denied the right to modify the content of the PSP in the absence of mechanisms established for this purpose. The report of the congress, which would have at least presented an opportunity to amend the programme, proceeded along these lines. In the end, the programme “issuing from the masses” was exclusively elaborated by the leadership of the French Communist Party and the Left Party, on the basis of “commissions,” whose work is known only by a tiny minority of comrades.

That was the method. And behind all this, the PSP is a reflection of what the party leadership has defended for years. It is a reformist programme which suits Jean-Luc Mélenchon perfectly. Like the official programme of the French Communist Party, the verbal radicalism of Mélenchon stops at the borders of capitalist property. His project of a “citizens’ revolution” leaves the principal levers of the economy in the hands of a handful of big capitalists. The objective, it seems, is to impose on Capitalism an ‘anti-Capitalist logic’.

In the absence of measures targeting capitalist property, the chances of success of such a ‘revolution’ are clearly nil. We will revisit the content of the PSP in greater detail in another article. For now, we highlight the fact that the section on international politics, entitled “France to change the course of Globalisation” is particularly weak. For example, Libya and the Ivory Coast are not mentioned. And yet these are the two latest major interventions undertaken by French imperialism. The Ivory Coast has for decades been completely destabilised by the actions of the imperialists. The war in Libya continues, with its trail of death, destruction and billions spent (while governments cut social spending).

On all this, the PSP says absolutely nothing. It limits itself to providing vague formulas for “peace” and against “Françafrique”. This serious deficiency, which affects the credibility of the programme as a whole, must be corrected. The French Communist Party must lead the campaign for the cessation of imperialist intervention in Libya and for the recalling of French troops from the Ivory Coast (and the rest of black Africa). We must insist that these demands appear in the PSP.

The silence of the PSP on the war in Libya reflects the confusion which reigned within the Left Front and the Communist Party around the launch of this imperialist intervention. Jean-Luc Mélenchon had taken a position in favour of the intervention, on the pretext that it had the backing of the UN. We also learned, from the pen of Mélenchon, that Pierre Laurent and MEPs of the French Communist Party supported this position. At the same time, other party leaders took a stand against this war, in L’Humanité, which has regularly denounced the imperialist nature of this intervention. What is the official position of the party? We don’t know. The result: Although a large majority of members was against the war, since the beginning, the position of Mélenchon has been presented in the media as that of the Left Front as a whole, Communists included. This should serve as a lesson for other major policy issues that arise during the campaign. The candidacy of Mélenchon should by no means signify the support of the Communist Party for all the ideas defended by the leader of the Left Party.

Many comrades see in the Left Front a means of stopping the decline of the French Communist Party. However, one does not necessarily follow on from the other. We are stronger united, of course, but we are not united in our vision of the party. On the one hand, the leadership of the party has its own idea of the future of the party and the Left Front, while on the other, as we wrote recently:

“The key to the recovery of the party does not reside in forms of alliance or groupings, but in a return to the fundamental ideas of Communism, the ideas of Marxism… The central question which arises for the party is the need to mobilize the youth and workers around a programme which aims at replacing Capitalism with another society, a Socialist society founded on public ownership of the banks and the means of production. It is at the same time the only alternative to Capitalism and the only guarantee of a durable rebuilding of the French Communist Party”.