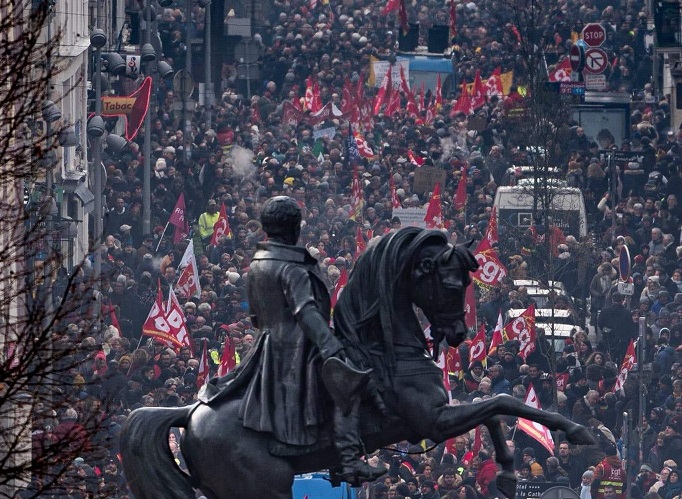 More than a million people were on the streets of France today at over 200 rallies, as part of a national strike against President Emmanuel Macron’s latest attack on pensions. Workers from the railways, the Paris transport system, oil refineries, and the media; along with teachers, civil servants, truck drivers and bank staff all walked out in opposition to Macron’s plans to increase the age of retirement. The potential for a showdown exists, but will the labour leaders rise to the occasion?

As we have previously reported, Macron is under intense pressure from the French ruling class to ‘reform’ the pensions system, which has faced successive attacks for decades. Currently, the legal retirement age is 62, with Macron hoping to raise it by four months a year up to 64 by 2030. This proposal is deeply unpopular with the general public, with a recent poll finding 80 percent opposed it. These attacks are stoking an anger inflamed by falling living standards across the board.

As ever, Macron is (rightly) perceived as arrogant, out of touch, and in thrall to the interests of the wealthy elite in pushing this rotten measure. In fact, he is not even in the country today – having absconded to Spain to sign a ‘Treaty of Friendship and Cooperation’ with Spanish Prime Minister Pedro Sanchez. From the safe distance of Madrid, he vowed to press on with the pension reform, saying it “is just and responsible”, and that France “must carry this out”.

The pledge to ‘reform’ pensions has been a pillar of Macron’s policy agenda from the day he was elected. Already, in 2019-20, Macron’s attempt to push through this attack resulted in the biggest strikes the country had seen in decades: a wave of class struggle that came off the back of the near-insurrectionary gilets jaunes protests.

Once again, the unions have responded with a call for a massive mobilisation against attempted pension reform; and once again, the French workers have answered.

Macron faces these new strikes from a weakened position compared to 2019, where he was already in a tough spot. He lost his parliamentary majority in the 2022 elections, and has been forced to lean on right-wing parties like the Republicans and National Rally (formerly National Front) in order to get policy passed.

Having come under attack from both the Nupes coalition (the main opposition bloc, led by the left-wing La France Insoumise), and the right-wing Rassemblement National (led by National Rally) over this pensions reform, Macron will have to rely on the centre-right Republicans in order to get it passed next month.

And with even some Republican MPs wavering, it is not a foregone conclusion that it will pass. He might be compelled to use Article 49.3 of the constitution to force through his reform without a vote, considered the nuclear option in the Assembly. The continued existence of this government could well be tied up with its ability to pass this reform.

On top of that, the temperature in society is rising. The economic crisis is bearing down on French workers and youth. Already, the government faced a skirmish on the industrial front after using state powers to force striking oil refinery workers back to work last October.

The anger among workers and youth was palpable in France today, and reflected in the huge crowds, with particularly impressive demonstrations of 140,000 in Marseille, 45,000 in Nantes, 40,000 in Lyon and 50,000 in Toulouse. Demonstrations of tens of thousands took place in many other locations, including Rennes, Bordeaux, Caen, Saint-Etienne, and elsewhere.

The French workers and youth are on a national general strike today against Macron’s attack on pensions. Big crowd already in Toulouse. #greve19janvier

Crowds even bigger now in Marseille!

A swarm of people (400,000 according to the CGT) assembled at the main rally at the Place de la République in Paris, spilling out into neighbouring streets and boulevards. It was the biggest single demonstration the capital has seen in years. While the protests were largely peaceful, the police nevertheless deployed teargas in the afternoon, and made around 20 arrests before the rally moved to Nation in eastern Paris, passing by the Bastille on the way.

The mood at the rallies is simply that ‘enough is enough’. Dominique, 59, a retail supervisor, was interviewed by France24 saying that, though she had never been on strike before, “this time, if they ask me, I will.”

“It’s been 30 years since I've been working in retail. I’ve already had surgery on both shoulders to deal with tendonitis caused by all the repetitive movements and the heavy loads I carry throughout the day. In total, I’ve got to carry about 600 kilos of goods every day. I’ve also had to get prosthetic thumbs on both hands: I’ve lost my joints from ripping and tearing boxes to put on shelves. So if I end up being told I’ll have to delay my retirement – whether it’s by a few months or a year – I won’t be able to accept it.”

“A lot of my colleagues end up with cancer at 60. And even if you don’t get cancer, from the age of 50 onwards, you get bad knees, a bad back, carpal tunnel, damaged ligaments – you name it.

“A few colleagues of mine look broken physically – they walk around like ducks. They need constant help; they can’t walk normally anymore; they’re screwed. So if you have to carry on till you’re 64… When I see people in that state, I know I’m not going to carry on.”

Plenty of people are acutely aware of the disproportionate impact of Macron’s proposal on poorer people, including Balthazar, a 22-year-old restaurant runner:

“I am absolutely against the reform. The aim is to save money, to make the country produce more, to lower companies’ contributions and make people work longer. It’s the poor who are going to be affected, especially since a quarter of the poorest men are already dead by the age of 62 – which is of course scandalous.”

Notably, all eight of France’s trades union federations agreed to a combined day of action, including the largest and more-conservative CFDT, which did not participate in the 2019-20 pension strikes. This uncommon level of unity shows the breadth of rage across all layers of the workforce, putting pressure on even the most backward union leaders.

The strike has also been very solid. Public transport throughout France, but especially in the capital, has ground to a halt. Many flights have been cancelled, 70 percent of teachers have walked off the job, and the critical energy sector has been hobbled by walkouts, with strikers at the state-owned EDF energy provider lowering electricity output by 7,000 megawatts. Public radio stations Franceinfo and France Inter are also playing looping music rather than rolling news, while the France 2 TV channel is showing reruns. The strikes also disrupted the major trade route between Dover and Calais, halting ferry crossings.

Moreover, a number of unions have filed notice for unlimited action, creating the basis for rolling strikes. “It’s a first day, there will be others,” said Philippe Martinez, leader of the CGT union confederation. Already, oil refinery workers have declared strike dates next week and in early February, and a further national demonstration against the pension reform is planned for Saturday.

In short, all of the ingredients exist for a decisive confrontation between the French workers and the despised Macron government. Over the years, there have been many opportunities to boot Macron out of the Élysée Palace, and all have been squandered by the unwillingness of the industrial and political leadership of the working class to connect the dots. 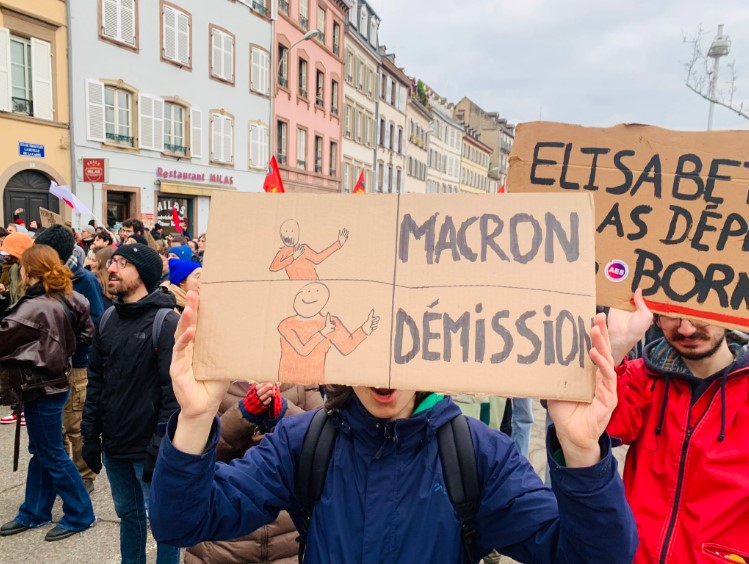 Instead of preparing an indefinite, political general strike with the objective of bringing down Macron, the leaders of the French working class have confined themselves to opposing this or that reactionary policy, calling limited ‘days of action’ to let off steam amongst the rank-and-file and put pressure on the government for backroom negotiations.

The resolve of the French workers is immense, as we have seen time and again – but it is not infinite. They are fed up with the old, bankrupt strategies that cost them days of pay with no results. Nevertheless, the strength of today’s strike shows that the appetite still exists for a serious fight. The coordination of all the main unions for today’s action is also a step forward, showing the pressure building from below for a proper convergence of struggles.

As we have seen in many parts of the world, the sheer ferocity of the current economic crisis is providing a powerful impetus to the industrial front. Rising inflation means that more and more workers are forced to fight just to maintain their current standards of living, and they are turning to the trade unions as their instrument. This is dragging even the conservative reformists at the head of the big unions towards coordinated action, whether they like it or not.

Last year in Ontario, Canada the reactionary government of Doug Ford was forced to retreat over an attempt to criminalise a strike by education workers by the mere threat of a province-wide general strike. In Britain, the largest day of coordinated strike action in a decade will take place on 1 February, with medics, teachers, academics, train drivers and other sectors downing tools simultaneously. And in France (where one-day ‘days of action’ are familiar), the union leaders are having to join forces, and will struggle to keep driving their members down safe channels. 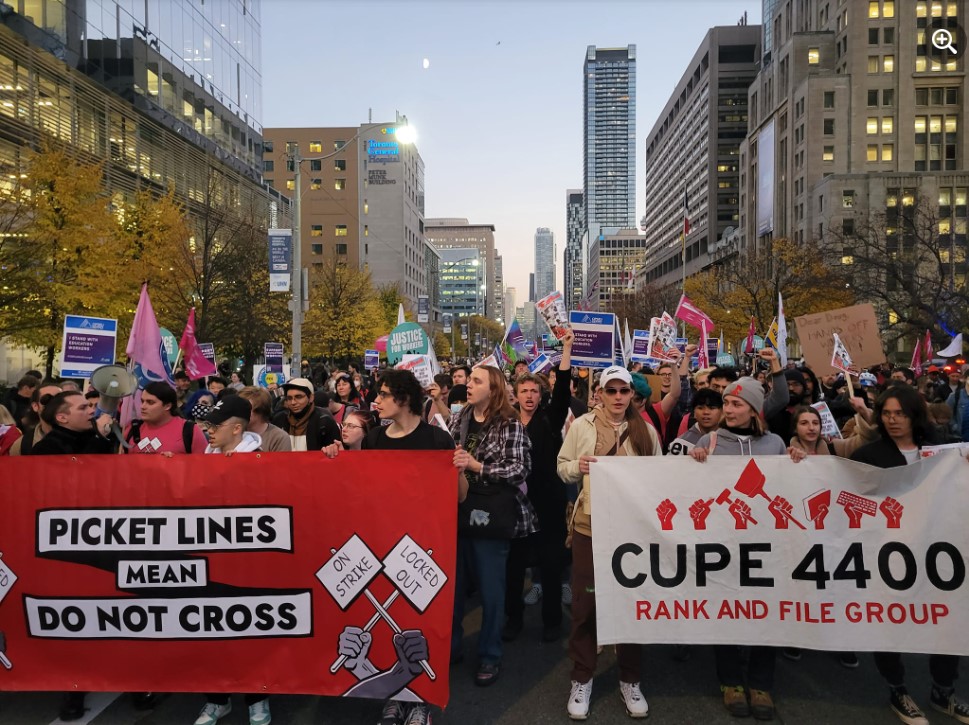 Workers in Ontario, Canada pointed the way forward, forcing the reactionary government into a retreat over the mere threat of a province-wide general strike / Image: Fightback

It is possible that one sector or another will declare an indefinite strike, which would electrify the situation and put all the union leaders on the spot. What must follow is a plan for a national escalation towards a general, indefinite strike with the explicit objective of bringing down the Macron government.

While this latest attack must be thwarted, the labour leaders cannot confine themselves to merely resisting the pension reform, which reflects nothing but the demands of the crisis-ridden capitalist system that Macron faithfully serves. If it is blocked now, it will only return later, and attacks will continue on all other fronts.

As we have seen, Macron can muddle through any number of isolated days of action, no matter how massive. A serious programme of escalation will be the best way to draw in the widest possible layers of French society, who all share a visceral hatred of the ‘Jupitarian’ president, and who all suffer under a crisis they did not cause, yet are expected to pay for. A proper plan of action will give the masses confidence to join the fray.

Ultimately, only a society under which the economy is managed democratically by the working class can provide ordinary people a decent existence and security in old age. The fight against Macron must be part of a battle against French capitalism, which has robbed French workers and youth for too long.

No more excuses! No more half-measures!

For the preparation of a national, indefinite, political strike!