In the eastern state of Monagas in Venezuela 150 delegates, spokespersons and members of the PSUV attended the first meeting of Alan Woods' speaking tour to launch his new book Reformism or Revolution. The audience listened with keen interest revealing a very clear understanding of what needs to be done.

Maturín is the capital of Monagas, an oil-rich state in the East of Venezuela. This is one of the main areas of oil production and development for the state-owned oil company PDVSA. Invited by the management of PDVSA, Alan Woods has just started a four-day tour of the state in order to explain the ideas of his latest book "Reformism or revolution. Marxism and socialism of the 21st Century (reply to Heinz Dieterich)". 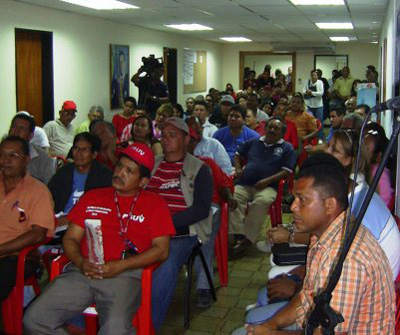 The first public meeting of the tour took place at the request of the Monagas PSUV members who wanted to discuss Alan's book Bolshevism, the road to revolution. They were very interested in this book after president Chavez mentioned it recently on national TV, and wanted to discuss the political conclusions of the book and the wealth of lessons of the experience of the Russian Revolution, and particularly the history of the Bolshevik Party, and their relevance for the Venezuelan revolution and the development of the United Socialist Party of Venezuela, PSUV.

The meeting took place in the meeting hall of the PSUV headquarters in Maturin in the afternoon of Monday, June 16. A local revolutionary community radio station also broadcast the meeting. One hundred and fifty workers and youth, men and women, spokespersons, delegates and rank and file members of the PSUV listened to Alan Woods with great enthusiasm. The meeting room was full and many were standing at the back.

Among those present were the comrades of the CMR cell in Maturín, mainly young comrades who are organising the youth work of the PSUV. Both Alan's book and the latest issue of El Militante, the Marxist voice of the PSUV, were on sale, and all copies were quickly sold out.

Alan started the meeting by pointing out that the experience of the Bolshevik Party should at least make the PSUV members think, since "you are more than five million, something without precedent, although you still have to complete the Venezuelan revolution. The Bolsheviks in February 1917 were no more than 8,000 in a country of 150 million, and in less than 8 months they had taken power, completing the revolution. How was that possible? It was due to the fact that the Bolsheviks had the correct ideas, the ideas of Marxism".

Alan spoke of the impressive example that the Venezuelan Revolution represents for workers and the oppressed around the world, but stressed that much was still to be done and that many dangers existed. Particularly he criticised those reformist tendencies within the Bolivarian movement who argue that the workers and the people have a low level of consciousness.

Alan answered these arguments by comparing the Venezuelan revolution to the Russian revolution, particularly with its opening act, the 1905 revolution. "The majority of Russian workers before Bloody Sunday were monarchists, rejected the Bolsheviks and followed a reactionary priest. However, after the massacre of January 9th those same workers went to the Bolsheviks demanding arms".

Many lies and slanders have been levelled against the Russian Revolution with the aim of discrediting it in the eyes of workers around the world. "All uprisings of the workers and the poor throughout history had been defeated and smashed. The Romans, when they put down the slave rebellion of Spartacus, crucified thousands of rebels along the Via Appia. What the slave-owners, imperialists and capitalists could not forgive the Bolsheviks and the Russian Revolution is that, for the first time, the slaves fought and won", Alan said to loud applause. 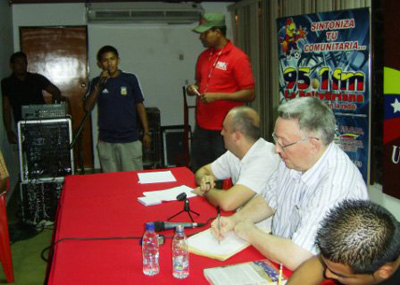 Another of the lies against the Russian Revolution is that there was no democracy. "In Russia there was a genuine participatory democracy", stated Alan, "built on the foundations of a genuine revolutionary state based on the Soviets".

Comrade Alan Woods expressed his concern because the Venezuelan revolution has not been carried through to the end, expropriating the capitalists, nationalising the banks, the land and the big industries. "If the working class does not take power into its own hands, if the revolution is not carried through to the end, what will happen? One class has to win and the other has to lose". This provoked an ovation from the audience.

And he continued: "The oligarchy has gotten a fright. If it wins and comes back the first thing it will do will be to abolish all the conquests of the revolution. And immediately after that it will teach the people such a lesson so that they will not dare raise their heads for another 50 years. The ruling class will smash and destroy the organisations of the people and the workers without respecting either law or human rights".

"Here in Venezuela you have more opportunities than the Bolsheviks. You cannot carry out half a revolution. The victory of the socialist revolution in Venezuela, expropriating the capitalists, would have an immediate impact throughout the American continent, unleashing a powerful revolutionary wave", Alan explained.

After an hour-long introduction, the floor was opened up to questions and debate. Answering all those who say that the Venezuelan workers and the people are not conscious enough and that therefore there are no conditions for socialism, the PSUV members present showed with their questions and interventions to have a very sharp class instinct and an enormous thirst to learn and deepen their understanding of the ideas of Marxism.

Ramón Herrera asked about the causes of the failure of the USSR. Alan explained that what had failed in Russia had nothing to do with Bolshevism but was due to the bureaucratic degeneration of the revolution. The best argument against those who say that Bolshevism and Stalinism are the same is "why did Stalin have to assassinate all the leaders of the Bolshevik Party?"

Another comrade asked if there were reformists in Venezuela, to which Alan replied asking the PSUV members in the audience "What do you think?" to which they replied with general laughter.

Alan pointed out how for 10 years there have been many opportunities to put an end to capitalism in Venezuela. "On April 13, 2002, with one single word of the president, capitalism would have disappeared". Then a worker stood up and said: "That is correct!" followed by a heartfelt and loud ovation from the audience.

Comrade Alan Woods said that all the alarm signals should be used and all red lights should be flashing about the pernicious effect of the pressure of reformists on President Chávez. "If the line of attempting to make a deal with businessmen continues, it will lead to disaster. Neither the capitalists nor the middle class will be convinced and the revolutionary rank and file will become demoralised". Instead of this, Alan argued that, "president Chávez should pass an enabling law to expropriate the banks, the land and the big industries". This proposal provoked yet another ovation from the public.

Alan stressed the need to struggle against reformists and bureaucrats, whose ideologists are people like Heinz Dieterich and many others. "You are the solution. You are the majority and they are the minority, but what happens is that they are organised and you are not. You must get organised in a Marxist tendency within the PSUV in order to struggle against the Fifth Column which is the main enemy and the main danger for the revolution".

In finishing and amidst loud applause he said: "You must get a big broom and clean up your own house!"