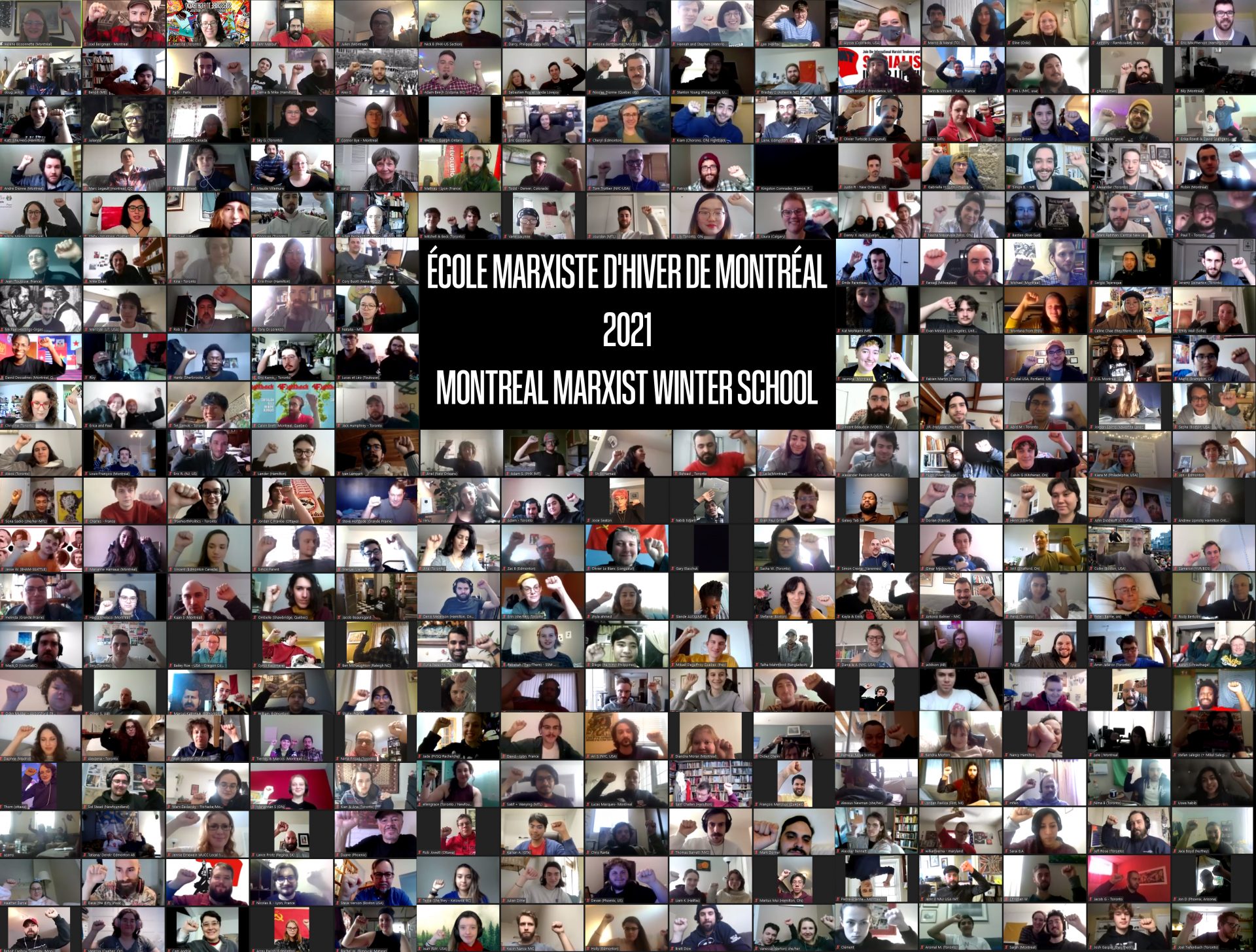 The 2021 Montreal Marxist Winter School was truly an unprecedented event. More than 1,150 people registered to participate in the school, which had ten presentations over three days, making this by far the largest Canadian Marxist meeting in recent memory. With big class battles on the horizon, the forces of Marxism are growing in preparation.

While the 2020 school saw the in-person attendance reach a record of 250, we took advantage of the online nature of this year’s school to get attendees from all over the globe. We had attendees from ten Canadian provinces and 26 countries!

The first session of the school was on the subject of the movement of the Métis in the latter half of the 19th century led by Louis Riel. Providing a Marxist analysis of these events which lie at the heart of the birth of Canada, Joel Bergman of the Fightback and La Riposte socialiste editorial board explained the true process lying at the heart of these tumultuous events. This heroic movement of the Métis interrupted the plans of the great powers and scored some important victories against colonialism. But this was not simply a “rebellion” or a “resistance”—rather it was a mass democratic revolution along the lines of 1837-38.

You can watch the video of the presentation and discussion here:

While the bulk of the participants were from Canada (more than 850), the true internationalism of this meeting was demonstrated by the nearly 200 Americans, more than 70 Europeans and more than 30 people from various other countries that attended the meetings throughout the weekend. And in internationalist fashion, we had international speakers from the United States, France, Britain and Chile.

We had John Peterson, editor of Socialist Revolution in the United States give a presentation on the American Civil War, or as he described it, the second American revolution. John explained that this revolution was necessary due to the incomplete nature of the first American revolution, which only laid the groundwork for the conflict between two incompatible socio-economic systems: industrial capitalism and slavery. You can watch the presentation here:

Jérôme Métellus, editor of Révolution in France gave a presentation on the Haitian revolution. This presentation enthusiastically followed the events which led to the slaves fighting back and winning for the first time in history. You can watch the discussion here:

We also had Carlos Hernan Cerpa Mallat, Chilean activist with Octubre who presented on the heroic struggle of the Chilean people from the revolution in the early 1970s to the incredible mass movements more recently. While the entire school was bilingual with translation in English and French, we provided a Spanish translation specifically for this session so a handful of Chilean activists could participate. You can watch the session here:

Our final international speaker was Ben Curry from the editorial board of Socialist Appeal in the United Kingdom who presented on the Irish Struggle for Freedom. Ben explained how the struggle for national liberation and the class struggle, far from being separate, are in fact intimately connected. You can watch the video here:

The failure of reformism and the need for a planned economy

One of the key goals of the Marxist School is to prepare Marxist activists today to debate other trends within the movement and defend a socialist perspective. With this in mind we had a presentation by Benoît Tanguay of the La Riposte socialiste editorial board which explained why reformism cannot solve the current economic crisis. You can watch that presentation here:

Connecting well with this, we had another presentation by another activist of La Riposte socialiste, Vincent Beaudoin. Vincent presented on the need for a socialist planned economy and how modern monopoly capitalism has actually shown how large scale economic planning is possible. You can watch this presentation here:

The fight against antisemitism

A key struggle for Marxists since the movement first began has been the fight against antisemitism. It is not for nothing that fascists and reactionaries of all types used “Judeo-Bolshevism” as a slur. However, more recently we have seen conservatives hypocritically using the question of the oppression of the Jewish people against the left. Hélène Bissonnette, activist with La Riposte socialiste exposed the hypocrisy of these so-called defenders of the Jewish people and explained what the genuine class approach to fighting antisemitism and oppression in all of its forms looks like. You can watch this presentation here:

The need for revolutionary leadership

To round it all out, we also had two presentations on the need for revolutionary leadership. The first was a presentation by Fightback editor Alex Grant who presented on the 100th anniversary of the founding of the Communist Party of Canada. Alex focused on the heyday of the party in the 1920s, when the best leaders of the working class from coast to coast joined forces and brought the genuine traditions of the victorious Bolsheviks to the Canadian class struggle. This “party of a new type” is exactly what activists with the International Marxist Tendency are fighting to build today! You can watch the presentation and discussion here:

The final session was led by Julien Arseneau from the La Riposte socialiste editorial board on the question of “The Class, the party, and the leadership: How to organize revolution.” Julien explained that while the conditions for socialist revolution have existed for a long time, the current leadership of the working class conciliates with the bosses and blames the workers for the defeats of revolutions. It is therefore more pertinent than ever that Marxists unite to build the leadership that the working class needs and deserves. You can watch the final presentation here:

Marxism on the march!

The Montreal Marxist Winter School was a bigger success than any of us expected. The hard work of our activists who organized and promoted the school has paid off in a big way. More and more, Marxism is on the map and the Marxists around Fightback and La Riposte socialiste have become a pole of attraction for thousands of youth and workers looking for an alternative to capitalism.

With the crisis only getting worse, capitalism exposes itself as incapable of bringing society forward. But capitalism won’t throw itself into the trash bin of history on its own. It’s up to us to get rid of this rotten system. Join us today!