On February 22, 2009 the inauguration ceremony of Dr Lal Khan's book Pakistan the Other Story: The 1968-69 Revolution took place in the ancient city and capital of southern Punjab, Multan. The inauguration ceremony took place in the beautiful and newly constructed Multan Press Club. The event was a great success, being attended by more than 600 people.

On February 22, 2009 the inauguration ceremony of Dr Lal Khan's book Pakistan the Other Story: The 1968-69 Revolution took place in the ancient city and capital of southern Punjab, Multan. The inauguration ceremony took place in the beautiful and newly constructed Multan Press Club. The event was a great success, being attended by more than 600 people, with the participation of trade unionists, peasantry, intellectuals, students, women political workers and members of the PPP leadership. The function was also attended by comrades from adjoining regions and other parts of the country from as far as war ridden Pukhtoonkhwa. 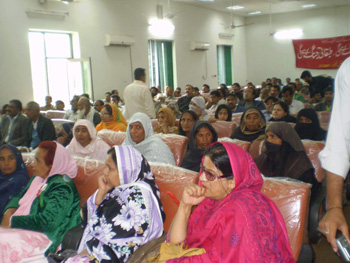 There was great revolutionary fervor and passion in the air and also a carnival like environment. The hall was decorated with banners and posters carrying revolutionary slogans. The meeting was chaired by Comrade Ilyas Khan, regional secretary of the Multan region and General Secretary of the People's Lawyers' Forum.

The distinguished speakers included, Mr Haider Abbas Gardezi, a veteran progressive politician of Southern Punjab and member of the federal council of the PPP, Mr Altaf Khokher one of the founding members of the PPP, a participant in the revolution of 1968, Mr Aziz Niazi, a progressive lawyer and one of the youth leaders during the revolution of 1968, Mr Pervez Aftab, a famous lawyer, intellectual and a leader of 1968, Professor Salahuddin Haider, a veteran member of the Progressive Writers' Association who faced torture in the Lahore fort during the fascist regime of General Zia-ul-Haq. Mr Aziz Akbar Baig a progressive lawyer and vice-president of the Pakistan Bar Association. The meeting was graced by Comrade Jamal Boota, who is a 95-year-old trade union worker who started his struggle in the Communist Party of India. Also present of course was the author of the book Dr Lal Khan.

The inauguration of this book in Multan had a special significance because Lal Khan was returning to the city where he started his political activities as a revolutionary student leader who challenged the Islamic Fascists of Jamat-i-Islami and General Zia-ul-Haq's regime. The struggle he started as a student activist has now blossomed in the form of this great revolutionary tendency around The Struggle..

The function was conducted by comrades Asad Pitafi and Rauf Lund. Young student activist, writer and artist Nayyer Mustafa spoke about his intellectual journey in Pakistan where history has been poisoned by Islamic fascism and the right wing. He elaborated that in this environment this book by Dr Lal Khan is a great effort in bringing out the truth which will enlighten the young generations.

Dr Ahmad Arslan read out his paper on the book, titled "Pakistan the Other Story - Strategies of Subversive Historiography". The main emphasis of his thesis was that the book challenges the established historiographies of the Indian subcontinent. He gave a detailed account of the Stalinisation of academic history writing and how this has distorted the orthodox tradition of Marxist history writing. Famous lawyer and human rights activist Bushra Naqvi spoke about the scientific approach towards understanding the revolutionary crisis which is highlighted by Lal Khan's book. She recommended that the book be included in University curriculums. An old female activist of the PPP, Begum BA Jiger, recalled her struggle with Zulfikar Ali Bhutto explaining how the People's Party's original programme was for a Socialist revolution.

Divisional president of the People's Labour Bureau, Malik Bashir, highlighted the betrayals of the reactionary leadership and government of the PPP, elaborating that the present PPP leadership is pursuing pro-capitalist policies and warned them that they have to face the workers who will not accept this tyranny. He stated that a war will be declared against privatisation all over Pakistan and further layoffs will not be tolerated.

Comrade Taqi from Gallewal town recalled his experiences in the revolution of 1968, how workers had demolished the state but the revolution failed due to the lack of a proper revolutionary ideology. Famous intellectual Pervez Aftab shared the revolutionary experiences of the 1968 movement and how he and other intellectuals used to conduct study circles with the workers and how they were persecuted by the C.I.D. He congratulated Dr Lal Khan for writing a book which is unbiased and based on scientific principles. He especially emphasized Lal Khan's mention of combined and uneven development of Pakistani society and its implications for the Pakistani revolution. Advocate Nargis appreciated the elaboration of the theory of socialism in a purely scientific way by the book. She also recommended that the book be made part of the University curriculum.

Professor Salahuddin Haider read his paper which looked into the historiographical implications of this book. He stated that the book needs more subaltern input with regards to anti-colonial struggle. He appreciated the fact that for the first time a scientific work has emerged on the revolution of 1968. Comrade Siraj Bhutta changed the mood of the function by singing a famous Ghazal by the legendary communist Urdu poet Faiz Ahmad Faiz. 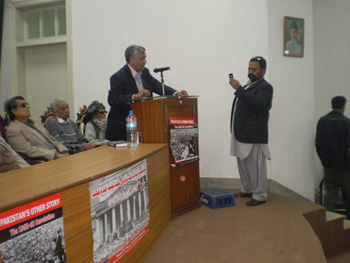 Comrade Ilyas Khan in his fiery leadoff criticized the reactionary policies of the present PPP government. He described how this regime is acting as a puppet of imperialism and in its sheer opportunism is waging a war against working class. He also stated that the revolutionary Marxists of the PPP have an independent position and they will never be slaves of this reactionary leadership. He criticized PPP co-Chairman Asif Ali Zardari for betraying the PPP's original programme.

Famous lawyer and intellectual Aziz Niazi shared his memories of the 1968 revolution and political struggle of the young Lal Khan who militantly challenged Islamic fascists in Multan. He appreciated the fact that Lal Khan by writing this book has laid down the ideological foundations of a future revolution. He stated that only a socialist revolution can deliver. His speech was decorated with beautiful verses from revolutionary Urdu poetry. He gave an analysis of the populism of Zulfikar Ali Bhutto and how it defused the revolution and then resulted in his martyrdom. Vetran socialist leader of the PPP, Malik Altaf Khoker spoke in his vernacular literary Urdu congratulating Lal Khan and the Marxist tendency for keeping the hopes alive in Pakistan. He shared his experiences of 1968, stating that he and others like him firmly believe in revolution and will always be on the side of Marxist revolutionaries.

Vetran progressive politician and intellectual Haider Abbas Gardezi read out his paper on the book. He reviewed the history of progressive politics in Pakistan and gave a scholarly account of the historical distortions under the influence of the USSR and China in reducing the role of Leon Trotsky. He traced the root cause of the failure of the 1968 movement around the globe to the Stalinist degeneration of the Communist parties. He stated that as a result of this failure his whole generation was condemned to live in defeatism. This defeatism is finally ending now due to the efforts of this Marxist tendency and this book by Lal Khan, which will serve as an ideological motivation for the future revolution.

Finally, in a roar of revolutionary slogans, comrade Lal Khan came to the podium. He recalled his days in this historical city where he started his journey in progressive politics, how the intellectuals and workers of this city introduced him to the revolutionary ideas of Marxism and Leninism. He summed up the international financial crisis and its implication for revolutionary politics. He highlighted the false nature of the movements of so-called Pakistani Liberals who are just following the policies of imperialism. He criticized the present PPP government's reactionary policies and explained why it is important for the Marxists to maintain an independent class position within the PPP. He condemned the attitudes of both ultra-leftism and opportunism and how they have always helped destroy the revolutionary movements. He highlighted the international nature of Marxism by quoting various works of Lenin. He also explained the role of Stalinism in the derailing of the revolution in the colonial countries. His speech electrified the audience and the hall was echoing with revolutionary slogans such as "Long Live Socialist Revolution". With this, the revolutionary meeting was concluded.

A number of resolutions were also passed which included:
1) This house rejects privatisation, Islamic fascism, opportunism and class collaboration;
2) The crackdown on PTCL workers is condemned;
3) The house condemns imperialist wars and Islamic Terrorism;
4) The only solution is a socialist revolution.

All resolutions were passed unanimously.