The Pakistan Trade Union Defence Campaign and The Struggle Publications organized the inauguration of "Pakistan's Other Story- The 1968-69 Revolution" at the Press Club in Rahim Yar Khan on February 14. Nearly 500 political activists, students and labourers from various industries participated in the ceremony.

The Pakistan Trade Union Defence Campaign and The Struggle Publications organized the inauguration of "Pakistan's Other Story- The 1968-69 Revolution" at the Press Club in Rahim Yar Khan on February 14. Nearly 500 political activists, students and labourers from various industries participated in the ceremony. The ceremony was filled with revolutionary enthusiasm and revolutionary slogans were raised at various occasions. 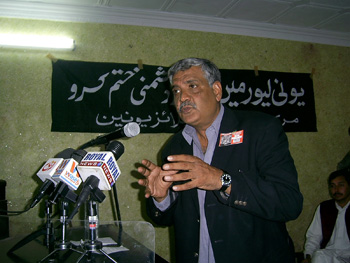 Aslam Naro who is a founding member of the PPP presided over the programme while chief guest was the author of the book, Dr. Lal Khan. The stage secretary of the meeting was Secretary General of Peoples Labour Bureau Bahawalpur Division, Haider Chughtai.

The programme started with Rashid Dostum reciting a revolutionary poetry of comrade Mohsin Karim. After that Fahim Khan read the famous poem Muhasira by Ahmed Fraz. Comrade Qamar uz Zaman who is the Vice-President of the PTUDC introduced the book to the audience. He said that the ruling classes have used all their resources to hide the real story of the masses from them. Their paid historians have been writing a false history since the birth of Pakistan. This hypocrisy has kept the real heroes in the dark while villains were projected as heroes. This book is meant not only to correct the history but also to clarify much theoretical confusion. This book not only explains the revolution in Pakistan but also introduces many revolutions in the world. Also issues like the national question, fundamentalism, reformism, populism, the betrayals of Stalinism, the character of the revolution in the colonial countries, the belatedness of the bourgeoisie in the undeveloped countries and the theoretical weaknesses of the Communist Party if India and of the communists of Pakistan are addressed in a scholarly manner. The real aim of writing this book is to prepare the revolutionary forces of today with the necessary ideas and clarifications.

Lal Khan in his speech explained that he has tried to transfer the political assets of 1968-69 to the new generation so that they know that this revolution did not take place on a different planet but on the same roads and streets on which they are living today. He said this book is the result of a combined effort of many revolutionaries and we have involved the witnesses of that revolution in this book. He explained the causes of the present economic crisis and how the gulf between rich and poor is widening in the present conditions. He also explained in detail the character of the revolution in Pakistan and why a so-called "national democratic revolution" can never succeed here. He also explained the perspectives of Pakistan and that a new 1968-69 is possible on a much bigger scale than before. He said that the revolutionary forces will take this opportunity to complete this revolution and completely transform the society into a socialist system.

The last speaker, Dr. Aslam Naro, said that all the incidents and events reported in the book are entirely true and authentic sources have been mentioned. He said, "I am filled with revolutionary spirit after reading this book." He said that people are tired of this capitalist system and are yearning for a change, which is only possible through socialism. He said that this book will guide the revolutionaries towards victory.