We are proud to announce the launching of the www.militanindonesia.org website in Indonesia. Its aim is to defend and promote the ideas of genuine socialism within the Indonesian labour and youth movement. We wish it every success and invite all Indonesian readers to check it out, send in articles and reports and support it. 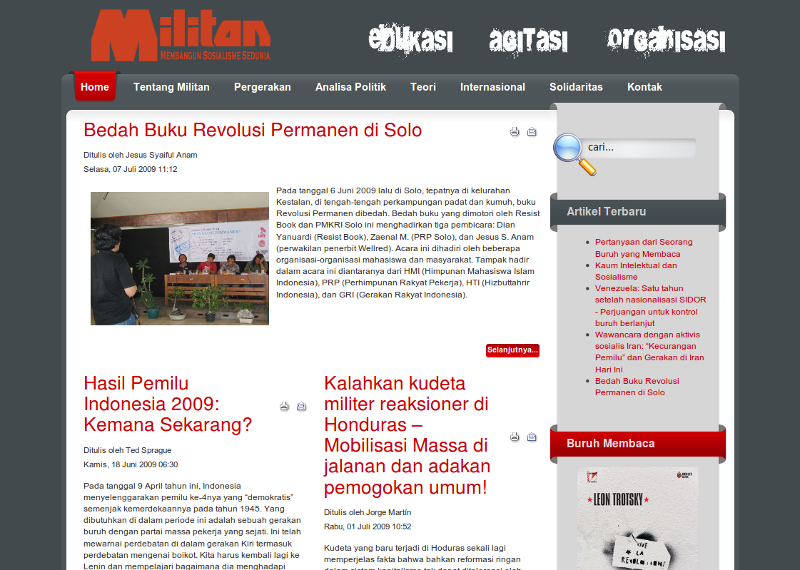 It has been more than 10 years since the fall of the Soeharto regime and the struggle for socialism in Indonesia still continues. Even though the fall of the Soeharto regime opened a wider space for the movement of the working class and the youth in Indonesia, formal democracy has not solved any of the problems of the overwhelming majority of the Indonesian people. The misery of all oppressed and exploited sections of society has in fact become worse. Privatization schemes and cuts in social programs have been pushed relentlessly by the government of Gusdur, Megawati, and now Susilo Bambang Yudhoyono. Now, with the worst economic crisis since 1929 shaking world capitalism from its very foundations, the choice facing by humanity is becoming ever clearer: socialism or barbarism. Capitalism has failed!

It is in this context that the Militan website (www.militanindonesia.org) has now been launched in Indonesia. The coming period is one of political turbulence. The revolutionary youth of Indonesia has to be ready to face this coming revolutionary situation. History has shown many times (and it has been confirmed by the heroic struggle that ended the regime of Soeharto) that in spite of the courage and determination of the masses, without an organization steeled in the ideas of socialism these social and political explosions will eventually evaporate into the thin air without bringing a decisive change for the working class and the exploited and poor masses.

This website is being launched as a part of the ideological struggle within the Indonesian workers’ movement. Our aim is to help workers and youth in Indonesia, helping to provide political education through an understanding of the lessons and developments of the class struggle on a world scale. We aim to do so through the publication of national and international political analyses and news from local and global struggles.

Militan wants to unite all workers and youth around the socialist program. We strive to defend within the working class movement and its organizations the idea that socialism is a necessity and the only solution to capitalist barbarism and imperialist domination in the present epoch. In order to do so we base ourselves on the experience of the struggles of the Indonesian and international working class.

The launch of this website is the first step in this direction. We appeal to all Indonesian activists to support this launch by spreading the news widely within the movement. We also call on all activists from Indonesia and all over the world to contribute with their suggestions, reports on workers’ struggles, translations of international articles (from English to Bahasa Indonesia) and to provide financial support to keep this website running. Moreover, we appeal to all Indonesian revolutionaries to join the Militan in our fight to build socialism in Indonesia and all over the world.