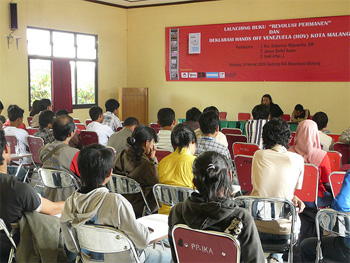 The launch of the book was held in the IKA Brawijawa building in Malang, on March 3, 2009. The union SPBI (Solidaritas Perjuangan Buruh Indonesia, Indonesian Workers' Struggle Solidarity), which  organized the event, invited two speakers: Jesus Syaiful Anam from Hands Off Venezuela (HOV) Indonesia and Romo (Pastor) Robertus Wijanarko, a professor from University Brawijaya. More than 50 students and workers filled the room.

In the same event, a HOV campaign was also launched in Malang with the screening of a documentary about factory occupation in Venezuela, No Volveran, which has also been translated into Indonesian. With this, the HOV campaign has spread to several cities: Jakarta, Bandung, and now Malang.

Pastor Robertus started the event by reviewing the book, although superficially. It seemed that he has yet to fully understand Trotsky's thought, which is not surprising since this is the first book by Trotsky in Indonesia. Nevertheless, he said that Trotsky's Permanent Revolution is a hope for a world-wide revolution. "We have been surrounded by neo-liberal jargons through the media and everything," said Pastor Robertus. He commented that the book deserves to be studied. This book spreads the idea of socialism which has its roots in the idea of Marx, which was later continued and translated by Lenin and Trotsky.

Syaiful reviewed the book in the context of the Revolution in Venezuela. "Socialism in Venezuela will not endure without an international support," said Syaiful. The President of Venezuela, Hugo Chavez, has also called on people to study Trotsky as a way toward socialism.

After the reviews from the two speakers, a number of students asked questions revolving around the problem of why it must be the workers who lead the revolution, rather than the peasants. Such questions are again a reflection of the misunderstanding and the myth against Trotsky's thought which is often accused of neglecting the peasant.

The book launch ended with a passionate singing of Internationale by the participants. Youth and workers, with clenched fist in the air, sang the revolutionary song of the proletariat.

Not long after, a book discussion event on Permanent Revolution was held on March 10th 2009 in the Faculty of Social and Political Science of the University of Gajah Mada, one of the most prestigious universities in Indonesia. The theme was "The Relevance of the Permanent Revolution Theory in the Current National Situation". This event was organized by Resist Book Yogyakarta and Sintesa University of Gajah Mada. There were about 45 people present with 3 speakers: Jesus Syaiful Anam from HOV-Indonesia, Danial Indrakusuma from Komite KPRM-PRD (The Political Committee of The Poor - People's Democratic Party), and Hakimul Ikhwan, Professor of Sociology from the University of Gajah Mada. 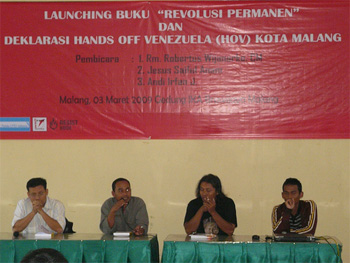 The banners read: The Launch of Permanent Revolution and Hands Off Venezuela in Malang

In the first session, Syaiful laid out the political and economic systems in Indonesia which are going more and more bankrupt each day. The workers, peasants, and urban poor have been marginalized, and there is no other complete and genuine solution to attain democracy and national emancipation other than through socialist revolution, with the workers as the most progressive element as its leader. Furthermore, Syaiful explained, with the publication of Permanent Revolution in Bahasa, Indonesia, progressive organizations which are active in the struggle to liberate the people will find a guide in their revolutionary struggles.

In the next session, Danial Indrakusuma, an activist with KPRM-PRD, asserted that Permanent Revolution is not relevent anywhere, especially in Indonesia. Basing his criticism from the works of Doug Lorimer (1), Daniel counterposed Trotsky's idea with Lenin's by quoting Resolution on the Current Situation (The Seventh (April) All-Russia Conference of the R.S.D.L.P.(B.), April 24-29, 1917), which is actually a validation of the Permanent Revolution.

In Resolution on the Current Situation, Lenin said:

" ... in one of the most backward countries of Europe amidst a vast population of small peasants, the proletariat of Russia cannot aim at immediately putting into effect socialist changes."

Stopping at this quotation, Daniel said that Lenin didn't advise the Soviet to immediately implement socialist programs, and then he concluded the mistake of the Permanent Revolution. Because according to Daniel, Trotsky would like to immediately implement socialism. But wait a second! Apparently if we read Permanent Revolution carefully, since 1906 (the year when Results and Prospects was written, 11 years before the Resolution on the Current Situation), Trotsky wrote:

"We have shown above that the objective pre-requisites for a socialist revolution have already been created by the economic development of the advanced capitalist countries ... Can we expect that the transference of power into the hands of the Russian proletariat will be the beginning of the transformation of our national economy into a socialist one? ...'The Paris workers,' Marx tells us, 'did not demand miracles from their Commune.' We, too, must not expect immediate miracles from proletarian dictatorship today. Political power is not omnipotence. It would be absurd to suppose that it is only necessary for the proletariat to take power and then by passing a few decrees to substitute socialism for capitalism. An economic system is not the product of the actions of the government. All that the proletariat can do is to apply its political power with all possible energy in order to ease and shorten the path of economic evolution towards collectivism. The proletariat will begin with those reforms which figure in what is known as the minimum programme; and directly from these the very logic of its position will compel it to pass over to collectivist measures." (Emphasis added) (Results and Prospects, Chapter 8. A Workers' Government in Russia and Socialism)

From this quotation, and also the subsequent paragraphs that explain it more in detail, it is clear that Lenin and Trotsky were in agreement: that it is a madness if we think we can immediately implement socialism with government decrees. 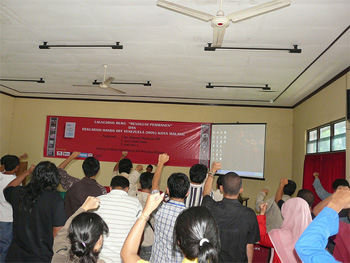 Youth and Workers singing The Internationale

According to Trotsky, the proletariat with its political power has to take a number of practical socialist measures (this is different from the accusation of going directly to socialism). The example he gave was that "the socialization of production will commence with those branches of industry which present the least difficulties." Lenin also said the same thing in Resolution on the Current Situation, that the proletariat has to explain to the people:

"...the urgency of taking a number of practical steps towards socialism for which the time is now ripe ... These steps are: first, nationalization of the land ... The next steps are the establishment of state control over all banks, and their amalgamation into a single central bank; also control over the insurance agencies and big capitalist syndicates and the gradual introduction of a more just progressive tax on incomes and properties."

"A number of practical steps toward socialism" (Lenin) and "the socialization of those branches of industry which present the least difficulties" (Trotsky) or "those reforms .. to pass over to collectivist measures" (Trotsky) are two sentences separated by a time span of 11 years which in essence explain one single idea. In principle, Lenin and Trotsky were in agreement.

Daniel then used the 100-year-old accusation against Trotsky, that Trotsky ignored the peasants. Reading the book, once again we can see that this accusation is completely false. Trotsky wrote:

"The first thing the proletarian regime must deal with on coming into power is the solution of the agrarian question, with which the fate of vast masses of the population of Russia is bound up. In the solution of this question, as in all others, the proletariat will be guided by the fundamental aim of its economic policy, i.e., to command as large as possible a field in which to carry out the organization of socialist economy. The form and tempo of the execution of this agrarian policy, however, must be determined by the material resources at the disposal of the proletariat, as well as by care to act so as not to throw possible allies into the ranks of the counter-revolutionaries." (Emphasis added) (Results and Prospects, Chapter 8. A Workers' Government in Russia and Socialism) 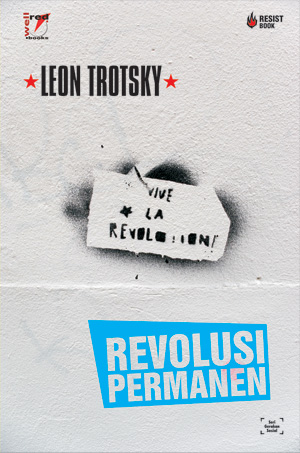 Just from this short quotation, it is clear that Trotsky never ignored the peasant. Here's what he wrote:

"The proletariat in power will stand before the peasants as the class which has emancipated it. The domination of the proletariat will mean ... recognition of all revolutionary changes (expropriations) in land relationships carried out by the peasants. The proletariat will make these changes the starting-point for further state measures in agriculture. Under such conditions the Russian peasantry in the first and most difficult period of the revolution will be interested in the maintenance of a proletarian regime (workers' democracy) at all events not less than was the French peasantry in the maintenance of the military regime of Napoleon Bonaparte, which guaranteed to the new property-owners, by the force of its bayonets, the inviolability of their holdings." (Result and Prospect, Chapter 6. The Proletarian Regime)

Did Trotsky support immediate seizure of lands from all the peasants and immediate collectivization? No, just like what he outlined:

"It will be easily imagined what a tremendous resistance would be aroused by the attempt to convert communal and small-scale privately-owned lands into state property. If it acted in such a fashion the new regime would begin by rousing a tremendous opposition against itself among the peasantry ... the new regime would gain nothing economically by the expropriation of small holdings and communal land ... Politically, the new regime would make a very big blunder, as it would at once set the mass of the peasantry against the town proletariat as the leader of the revolutionary policy." (Results and Prospects, Chapter 8. A Workers' Government in Russia and Socialism)

The third session was closed by Hakimul, a sociology professor, who put forward his view on Permanent Revolution in a very careful manner. He enthusiastically welcomed the publication of this work by Trotsky in Indonesia as a part of widening the reading of Marxism in Indonesia. The event was ended with an open discussion whereby participants were asking questions about Marxism.

Donate for the publication of the Permanent Revolution in Indonesia

(1) In 2008, Doug Lorimer and the minority group within DSP split and formed the LFP.