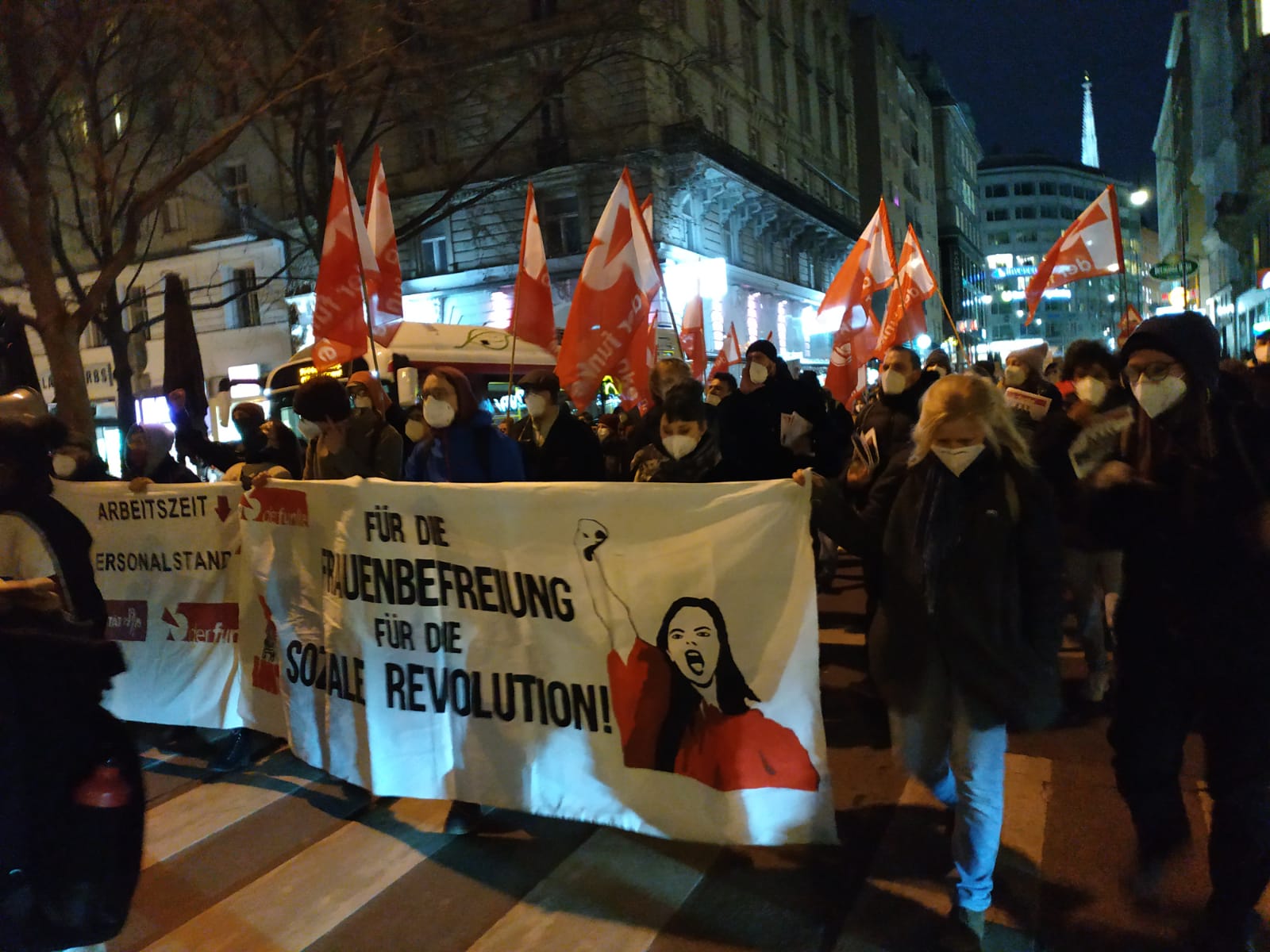 Despite the ongoing pandemic, comrades of the IMT participated in and held events to commemorate International Working Women’s Day all over the world.

On 7 March, Socialist Appeal (British section of the IMT) put on a meeting about the Origins of Women's Oppression. The call was attended by 130 people at its peak, with more watching along live on other platforms.

The lead off put forward a Marxist explanation of women's oppression, which has not existed forever but arose with the origins of class society. In prehistoric communities, women occupied an equal position to men, their labour was equally valued and monogamous marriages did not exist. However, with the emergence of private property, men were able to claim ownership over the surplus product, and sought to pass down their property to their children.

This resulted in the emergence of monogamous marriage and the patriarchal family, while at the same time, so-called 'domestic' labour lost its value, as it was not producing things that could be sold for a profit. With the origins of class society, therefore, the position of women became completely degraded.

Therefore, men subjugated women for a material reason that still exists today: property. And by overthrowing capitalism and class society, we can thus do away with women's oppression.

The discussion covered a wide range of topics, with attendees commenting on many different features of women's oppression in history and today, including how harsh historical punishments for adultery underline the real material basis of monogamy, as a means to defend inheritance.

Comrades discussed the role of religion and the recent inquiry into the Catholic Church in Ireland, with its scandalous profiting off the enslavement and imprisonment of working-class women.

There was also discussion on the dual burden of domestic labour and wage labour that women face today, and how we should respond to this as Marxists. Rather than giving in to calls for wages to be paid for domestic labour, which would only maintain the status quo of women remaining a servant in the home (even if a paid servant), under socialism we should work to end the private nature of domestic labour and provide free childcare and other support as part of the 'social wage', therefore freeing up women’s time.

Overall, the discussion was very lively. Before and during the meeting, several people signed up to get more involved with Socialist Appeal, indicating the hunger for a Marxist explanation for women’s oppression, and the fact that only Marxist theory can point to a solution for this millennia-old scourge.

Our comrades in the Spanish state organised a rally in Antequera. First of all, an assembly was organised to discuss how the rally would be conducted to ensure participants’ safety during the pandemic. Acilia, the women’s organisation of the PSOE, agreed to our comrades’ proposal.

We made contact with Adelante Antequera (the municipal group of Izquierda Unida) and the CGT union, who supported the rally, and the CCOO union, who refused to take part because they said that our slogans were a call for a strike, and the circumstances were not favourable for this. In the end, Acilia also refused to join, probably due to orders from the PSOE leaders.

Our comrades got in contact with some activists who helped poster for the event. The comrades also promoted the event through social media, organised around the slogans: “the street is the place to fight to change reality”.

In the end, around 50 people took part. Comrades participated in the safety committee and tabling, selling a number of materials, and also making interventions.

In Barcelona, comrades tabled with L’Octubre and LdC papers, leaflets and theoretical magazines. The demonstration itself was divided into sections due to COVID, and also into ‘women-only’ and ‘mixed’ groups. It was hard therefore hard to say how many people were involved, but clearly fewer than in previous years.

In Morón, comrades participated in a car convoy, while in Madrid all rallies and demonstrations were forbidden by the government just a few days before 8 March.

Many of those who had been organised were cancelled, except a few in working-class neighbourhoods, one of which comrades attended, in which 200 participated. The comrades’ revolutionary ideas went down extremely well with the protesters.

In Vitoria-Gasteiz, there were two events: a rally at the university in the morning, and a street rally in the afternoon. Comrades took part in both. Finally, in Sevilla 300 people participated in a static rally with much dancing and singing.

Clearly, COVID-19 cut across 8 March this year, coupled with poor organisation and political weakness by some sections of the left, along with the feminist organisations involved in planning the demonstrations. This accounts for the relatively small protests compared to previous years.

Still, our comrades took part enthusiastically, and their revolutionary slogans about a class-based solution to women’s oppression connected well with the demonstrators.

Due to the restrictions brought in to control the third wave of the pandemic that is hitting Italy, many initiatives and marches for 8 March have been cancelled or reduced in scale. Our comrades’ main initiative was the organisation of a Marxist conference on the women's question, Libere di lottare (‘Free to fight’), which took place online on 6-7 March. 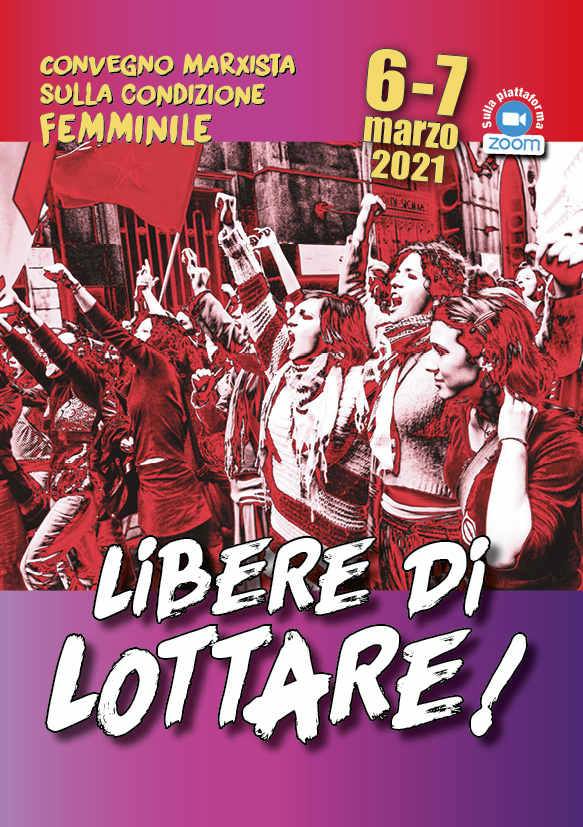 We waged a campaign to prepare for the event, handing out thousands of leaflets and sticking up hundreds of posters throughout Italy.

The conference was a great success, with 400 attendees. The first of the four sessions focused on the roots of women’s oppression, identifying the material reason for the development of patriarchy in the relationship between the emergence of class society, and the birth of private property.

The second session focused on the conditions of working women, job insecurity, and gender wage gaps for the same jobs. A lively discussion ensued, with dozens of contributions by comrades who live every day under the shadow of class and sex oppression in their workplaces.

On Sunday, during the morning session, we discussed civil rights. Starting from the movement that led to the approval of the Legge 194, which introduced abortion rights in the ‘70s, we discussed the situation of counselling for women, the reactionary campaigns carried out by pro-life movements, and sexual liberation.

The final session took an international perspective. Gender oppression is not confined to Italy, and we heard from comrades from other sections of the International Marxist Tendency, including Denmark, Brazil, Mexico and Pakistan, all of whom described the monstrous treatment of women in their respective countries, and contextualised the battle for women's liberation within our more general revolutionary struggle against capitalism.

These two excellent days of discussion showed that the IMT in Italy is leaving its mark on the debate on the women's question in the labour movement and the women's movement. We are starting to attract the best and most militant young women to our ranks.

Thousands took to the streets in Austria on the occasion of 8 March. In all larger cities, the demonstrations were bigger than in recent years, with several thousand marching in Vienna and around 1,000 in the second and third largest cities of Graz and Linz.

The IMT in Austria was present at demonstrations in five cities (with the largest gathering around 100 people in Vienna), where we presented anti-capitalist speeches, banners and Marxist literature. We also advertised our upcoming “Bread & Roses” seminar on 13-14 March.

Over the last few weeks, there were many small and medium-sized left-wing demonstrations, but 8 March was the largest this year. This shows that women’s oppression, sexism, discrimination against the LGBT-community and domestic violence are deeply felt concerns for many.

The large turnout was also a sign of a general politicisation in society, especially amongst the youth. It showed that the recent big protests led by right wingers against COVID-19 lockdown measures are only one side of polarisation, and that there is no general “shift to the right” in society.

The conditions for a mass movement around 8 March in Austria are ripe – but what is needed is a perspective and methods of class struggle. The responsibility for such a perspective lies with the leadership of the big working-class organisations. Without such a perspective, the vacuum was filled by different, smaller initiatives.

In Vienna particular, this gave 8 March a sectarian character, with two separate demos. One was more accessible and open to all people. However, a peculiar interpretation of identity politics was used to argue that organisations shouldn’t use more than two flags and distribute no political material for the sake of “representation”, trying to limit the demo’s political orientation to the speeches selected by the organisers.

We respected all measures regarding COVID-19 safety but nevertheless intervened with our materials and banners. The other, smaller demo of 200 women was more militant and class-oriented in its demands, but men were forbidden from attending. Thus, both approaches in different ways went down the divisive road of identity politics.

Yesterday’s protests were a show of huge enthusiasm and fighting spirit. The biggest obstacle to channelling this energy in a united struggle is the leadership of the Social Democracy and the trade unions, who limit themselves to a role of “constructive” opposition and are not lifting a finger to organise a fight against the capitalist policies of the Conservative-Green government.

With a countrywide mobilisation, a systematic campaign in workplaces, schools, universities and on the streets, a mass protest with strikes would be entirely possible. This would deal the crisis-ridden government a heavy blow, It would challenge the power of big capital and would shake the capitalist system to the core. This is the perspective that Marxists are fighting for.

For the united struggle of the working class – against capitalism – for socialist revolution!

Defying the COVID-related ban of assemblies, all major Swiss cities saw broadly supported mobilisations on and around International Working Women’s Day. While the growing movement for women’s rights has faced increasing police repression in the past years – particularly in Zurich – activists faced new heights of police despotism under the guise of enforcing Covid-restrictions.

From removing bookstalls to deploying tear gas, beatings and arrests: “our friends and servants”, as the German saying goes, used a wide array of tools at their disposal to try and dissolve the demonstrations – but to no avail. The pandemic and police reaction in the past days are making it ever-more clear to wide layers of the working class, and particularly young women, that the state is on the side of capital. The objective basis for the spread of Marxist ideas has thus never been more favourable.

This could also be seen in our two Zoom streams (one in German, one in French) on the question of sexism and violence against women. More than 100 people participated in the events, contributing on the questions of women’s important role in revolutions, the need for an anti-capitalist struggle for LGBT-rights, the socialisation of housework, and the necessity to fight as the united working class.

A group of reactionaries tried to Zoom-bomb the German-speaking meeting, but were promptly removed, allowing the meeting to continue normally and leaving participants bolstered in their convictions to rid the world of capitalism and the maggots that fester in its shadows.

In El Salvador, on 8 March, a commemorative act of denunciation was held against sexist and workplace violence, in which about 1,000 people participated, mostly young women fighters from different feminist, student and union organisations.

The Salvadoran section of the International Marxist Tendency, actively participated alongside the workers occupying the Florenzi industry factory. The comrades distributed flyers referring to the hunger strike of two women and a man over the demands of 210 workers fired eight months ago, none of which the state has resolved.

The event concluded with a collective lunch with the workers from the Florenzi factory.

Eight months after the historic struggle of the Florenzi workers and within the context of 8 March, we say: Justice for Florenzi, long live the working women of the whole world!