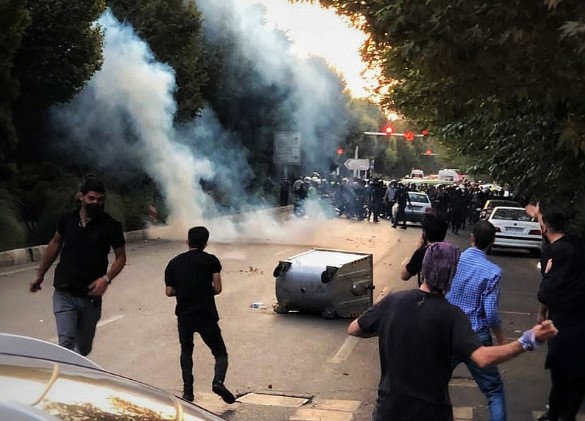 It is over a month now since the outbreak of the youth uprising in Iran, sparked by the regime’s murder of a young Kurdish woman, Mahsa Amini. With near constant clashes between security forces and youth in every major city, in addition to waves of bazaar strikes and a series of industrial strikes, the situation has the potential of turning into a revolutionary mass movement. Since last week, a campaign for a general strike has been spreading, along with calls for the formation of revolutionary resistance committees.

This revolutionary movement has received massive support from workers and youth across the world, especially amongst the Iranian diaspora. Meanwhile, in many western countries, bourgeois politicians, in cynical self-interest, have joined solidarity protests, cut their hair in feigned support for Iranian women, and made hypocritical speeches about human rights. The exiled Pahlavi dynasty, overthrown by the 1979 revolution, jumped at this as an opportunity to present themselves as the spokespersons for the Iranian people. 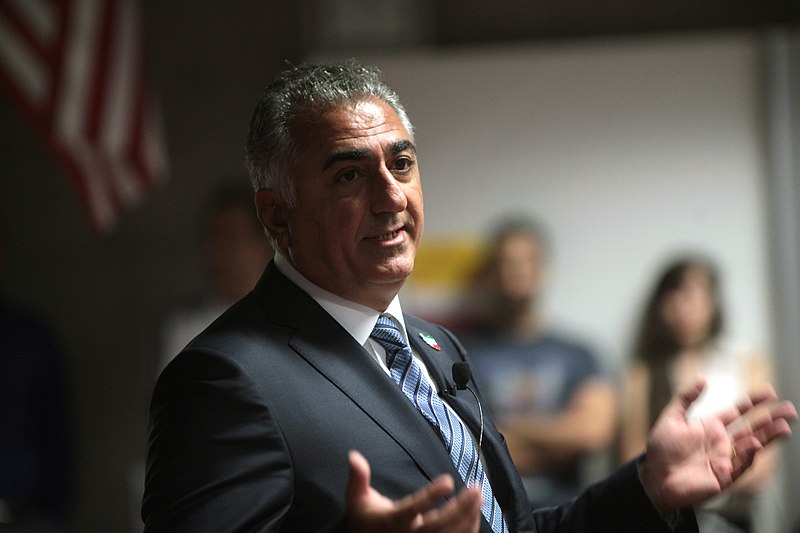 The exiled Pahlavi dynasty, overthrown by the 1979 revolution, have jumped at this chance to present themselves as the spokespersons for the Iranian people / Image: Gage Skidmore

From the start, we have seen a constant flood of interviews and articles on the Pahlavis in foreign-backed Persian news outlets, such as Iran International, BBC Persian, VOA Persian, among others. Reza Pahlavi, the former crown prince, presents himself a liberal democrat, recasts his father’s bloody rule as a modern liberal society with “stability, security, and progress of the highest degree”, and appoints himself the role of managing a smooth transition away from the Islamic Republic.

The same lies are echoed by the western bourgeois media: the myth of a liberal Pahlavi regime, presenting Reza Pahlavi as a unifying force and downplaying the revolutionary character of the movement. This followed a series of stunts by the imperialists, with western politicians in the Israeli Parliament, European Parliament and elsewhere cutting their hair in ‘solidarity’ with the Iranian people.

Reza Pahlavi has been opportunistically egging on the strikes and protests. He even goes so far as to give unsolicited advice to striking workers that “the secret of victory is unity, solidarity and continuity”. As if these Pahlavi thieves who absconded from Iran with billions of dollars have anything in common with the Iranian masses or revolutionaries.

The imperialists and Pahlavis have shed further hypocritical tears over the repression of a riot on Sunday evening in the infamous Evin Prison, with Reza Pahlavi issuing the tone-deaf tweet: “The responsibilities for any loss of life in this fire at Evin lies with Ali Khamenei and his evil regime”. He conveniently forgets that it was his own father, Shah Mohmmad Reza Pahlavi, along with the imperialists, who built this prison in the first place, in which they tortured and killed thousands of political prisoners. The Islamic Republic merely continued same path of Pahlavi terror, adding a few special characteristics of their own.

These criminals, the Pahlavis, have called for further international sanctions and for western countries and Iranians to unite against the Islamic Republic. In the past few weeks, Reza Pahlavi courted the most reactionary politicians in North America and the European Union. Already Canada, the EU and the USA have imposed new sanctions; with the US tightening the stranglehold on Iran’s oil exports.

It will be the working class who will feel the brunt of these sanctions. Already, through sanctions, both the western imperialists and the regime have created a nightmarish social crisis in Iran, with mass unemployment, soaring inflation and the overwhelming majority of Iranians living in poverty. Pahlavi's response to the sanctions, echoing his reactionary friends in Saudi Arabia and Israel, has only been that they are not hard enough. The Pahlavis and the imperialists do not care for the people of Iran, their support for this movement stinks of hypocrisy and self interest.

The crocodile tears of the imperialists over the violation of human rights and new sanctions have only given ammunition for the rotten Iranian regime to attempt to paint the entire movement foriegn-backed intervention. There is a constant barrage of propaganda coming from the regime. As the ongoing movement lacks any clear leadership or programme, this has sown confusion among the masses, causing hesitancy amongst many who would otherwise have supported the movement. 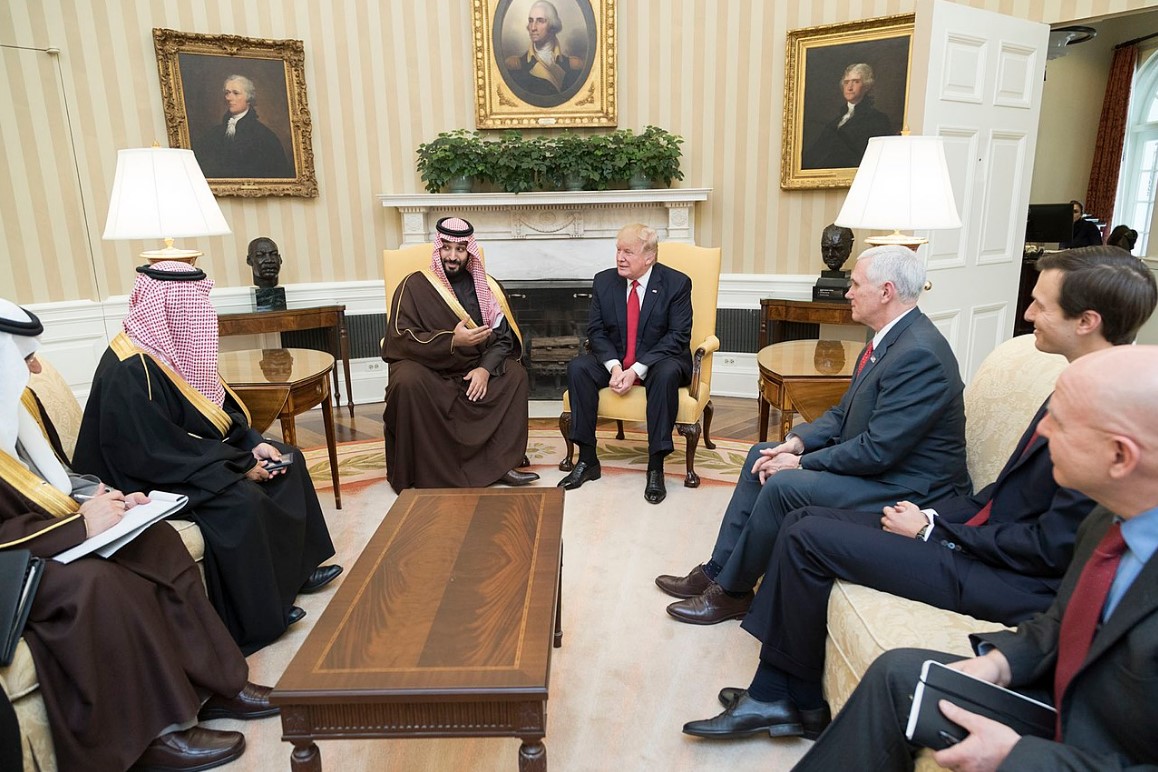 The US and its close allies will never be champions of democracy in the Middle East / Image: The White House

The Iranian regime plays on this weakness of movement and persistently accuses it of being in bed with the monarchists and the imperialists. In reality, there is no sign at this point that these forces have any significant influence over the movement inside Iran itself.

The fact is that western imperialists have never been and never will be champions for democracy or the working class, in Iran, their own countries, or anywhere else. We only have to look at the rotten and corrupt regimes the US installed after their invasions of Iraq and Afghanistan; or see their closest allies such as Saudi Arabia, a reactionary religious dictatorship that stokes the flames of ethnic and religious sectarianism everywhere; or Israel, another reactionary regime whose brutal oppression of Palestinians reveals a complete disregard for human life. It is no wonder that the Iranian masses do not see western imperialism as their salvation.

In Iran itself, the imperialists have a very dark history of exploitation and propping up the dreaded Shah regime through coups, and training the Shah’s secret police SAVAK. The constant attempts at reasserting its stranglehold over Iran by undermining the present regime since the 1979 revolution, from funding Saddam Hussein during the Iraq-Iran war to the ongoing US-led sanctions which have devastated the country, have only cemented a justified hatred of imperialism amongst the Iranian people.

The Islamic Republic and western imperialists are two sides of the same rotten capitalist system, which has nothing to offer the Iranian masses. The Islamic Republic has used the attacks of the imperialists to justify the increased exploitation of the working class. The Iranian ruling class and its cronies have not only recouped their losses from the sanctions, but in fact Iran now has the 14th highest number of dollar millionaires in the world, who since the pandemic have increased their wealth by 24 percent.

The sanctions and threats from the imperialists have only helped the regime, as seen in the November-December 2019 uprising, which stopped in its tracks following the assassination of Qasem Soleimani and threats by the Trump government.

Crisis of leadership and the imperialists

The present movement has rejected the imperialists and their Pahlavi stooges with the popular slogan: “Death to the oppressors - whether that be the Shah or the [supreme] leader”. During previous uprisings, monarchists' slogans were occasionally chanted by some middle-class elements, but now they are nearly completely absent. Instead, various student groups have made statements denouncing the Pahlavis and the western media, among them students of the Science and Culture University in Tehran, who have expressed their disgust towards western bourgeois media burying their important anti-regime and anti-Shah slogan:

“In recent weeks and throughout the days of the uprising, an ominous coalition of oppressors of the ruling regime and supporters of Reza Pahlavi and other royalist thugs, with the cooperation of the Saudi-paid journalists of Iran International and Manoto and the ’neutrals’ of the Persian BBC, tried to silence this slogan… We will repeat our slogans so that they [monarchists] will be saddened to hear the truth in their safe houses in Los Angeles and London.”

This sentiment is shared by the various workers’ organisations that have come out in support of the ongoing movement with similar statements. The militant Haft Tappeh workers put it quite well:

"America’s Special Representative for Iran has said that they are not looking for regime change in Iran. I wanted to say: Is this person backward or something? Or is he pretending to be stupid? We were not looking for your support at all! Who asked you criminals for support?

"By the way, we know better than ever before that neither America, France, England, China, Russia nor any other filthy government supports us the workers. But the bad news for America is that its favourite rulers in Iran (Islamic regime's auhtorities) are on the verge of fleeing to the arms of their fathers, namely America, England, Russia and China.

"You are our class enemy and we are at war with you. We always knew that it is in your interest to have a government (like Islamic Regime in Iran) that implements the most severe anti-labour policies. What form of government is better for your interests than the Islamic Republic?"

While there is enormous support among the working class for the revolutionary movement, even outside the militant independent trade unions, this has largely remained passive. In the absence of a revolutionary leadership and programme, the only visible alternative is the hated Pahlavis. The masses understand that the interests of the imperialist-backed Pahlavis and their own are fundamentally at odds.

Reza Pahlavi’s pleas for unity between Iranians of “different political tastes in the Iran of tomorrow”, who he says need to “unite for our common goal to unite to save the country”, as stated in an interview with Iran International, only threaten to push a section of the masses towards the regime. Reza Pahlavi and the former queen Farah Pahlavi have also made constant calls for security forces to defect and join the movement; however, this is not exclusively directed to rank-and-file, but also the criminal officers and generals of the regime.

Any form of unity with these reactionaries essentially means subordinating the movement to a section of the ruling class. For this movement to be transformed into a revolution, it is necessary to campaign for a general strike, to build a resistance council in every workplace, college and neighbourhood, and to win over the whole working class and poor to join the struggle. This would require the development of a revolutionary programme, incorporating the demands of the workers and poor. In the absence of a revolutionary programme and leadership, this struggle will be far more protracted, which in turn increases the risks of the movement losing momentum.

Down with Islamic Republic! Down with Imperialism!

The revolutionary youth at the forefront of the struggle have begun this enormous task. Throughout Iran, groups of youths are campaigning for a general strike and calling for the formation of resistance councils. Ultimately, because Iranian capitalism is at a dead end and cannot fulfil the economic and democratic demands of the masses, the only way forward is for workers to seize power for themselves.

The task of revolutionaries outside of Iran is not to echo the imperialist propaganda but to expose its hypocrisy and the imperialists’ cynical self interest in Iran, which has nothing to do with the Iranian masses. It is necessary to expose the lies of the Pahlavis and the imperialists, and highlight the real direction of the revolutionary process driving the masses. In this struggle, the only genuine ally of the Iranian masses is the international working class, united in their common fight against capitalism and imperialism, which has nothing to offer the masses anywhere in the world.