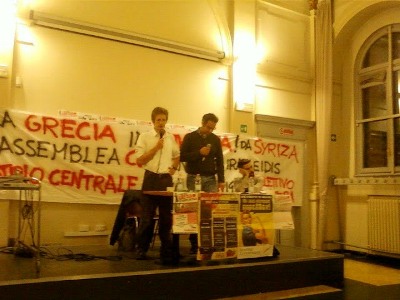 More than 800 people attended 12 meetings, with more than 2,500 Euros raised. These figures show that the tour “The Wind of Greece comes to Italy”, which was organised by the Italian Marxist paper FalceMartello, has been a resounding success. The speaker was Angelos Irakleidis, from the Editorial board of Epanastasi, the journal of the Marxists in Syriza.

We have often said that Greece stands at the forefront of the revolution in Europe and this belief was shared by those who attended the meetings. Angelos introduced the discussions with a lead-off on the political and economic situation in Greece and dealt in detail with a critique of the programme put forward by the different trends within the Greek left. He concluded his speeches with an explanation of the need for a Marxist programme. The interventions from the floor did not portray to the slightest degree an academic or one-sided approach, but were very lively and drew a comparison between the situation in Italy and Greece. Most of them focused especially on the poor situation of the Italian left and how to get out of this impasse and pointed out how there was much to learn from the development of the class struggle in Greece. 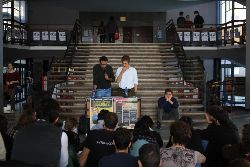 The campaign kicked off in Milan, on October 24, with a meeting at the “Università Statale “ (State University). The administration refused to let us have a hall for the meeting and so the comrades of the student coordination committee “Always in Struggle” occupied the main lobby. They defied the Rector and won. Since the beginning of the academic year our meeting, with more than 70 people attending, has been the best attended political meeting.

In the evening one hundred people packed a hall in the centre of Milan. In that meeting, full of workers and left wing activists, Angelos explained that one of the secrets of Syriza’s success was the refusal to join any coalition with the parties which supported the memorandum. The comrades of Epanastasi characterise Syriza’s programme as a left reformist one, and underline that this was one of reasons for the defeat in the June 17 elections. Nevertheless, Syriza's refusal to join any “National Unity” alliance made the slogan of the “Government of the Left” credible. It is this reliability that the left in Italy lacks, as stressed by many contributions from the audience. 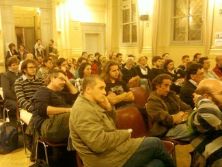 The next morning around 150 students attended a meeting in a secondary school in Crema (Lombardy), where “Always in Struggle” has a strong base. One student asked how it was possible to live in such a desperate condition in a European country?”  Angelos answered that “it is not possible, and the future that capitalism prepares is barbarism, in Greece and in Italy as well. That is why we have to fight for socialism”.

In the afternoon and evening of the same day two debates were organized in Udine and Trieste, in the north east of the country. 40 people, mostly youth, took part in the debate in Trieste while in the evening around 50 people gathered in Udine. The event, as in other occasions, was preceded by a solidarity dinner which helped the fundraising. 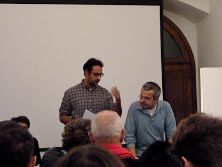 The next leg of the tour was in Trento, on Friday October 26. More than 70 people were present. Students, trade union and left wing activists were keen to debate with Angelos. One of the topics of the meeting was the Euro. “Euro or Drachma?” – argued Angelos – “It is a false dilemma. Syriza have to deal with the question of power not of the currency. The task of the left is not to choose under which currency the ruling class can better exploit the workers”. 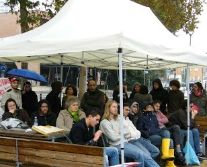 On Saturday 27 two events were organised in Emilia. In Bologna the lunch, followed by a debate was seriously undermined by the severe weather conditions, as it was an open-air event. Nevertheless, 40 brave comrades attended. Among them a Greek woman who agreed with Angelos' words: “everything has been put under discussion in Greece, a thing that we have to do in Italy as well”, was her comment.

In the afternoon a really well attended meeting followed in Modena. Trade union activists, angry pensioners and several youth discussed with Angelos. Several questions about the position of the KKE were made. Angelos replied “KKE organises some of the most militant activists in Greece, but the KKE leadership has led them up a blind alley due to its sectarian policy which rejected the call for a government of the left. They organise separate demos during the strikes, allegedly not to 'contaminate' their members with the ‘reformist filth’, but in reality condemning them to isolation”. 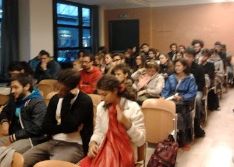 On Sunday, October 28, a meeting was held in Florence, with 50 people present. Here Angelos could sum up in his mother tongue, thanks to a translation straight from Greek. Several questions were focused on the Golden Dawn. “Golden Dawn is a danger – said Angelos – but today in Greece a fascist government like the one of Mussolini is ruled out. The Neonazis have not more than 1000 activists and if the workers' movement really wanted to, it could sweep away them through mass antifascist action.” 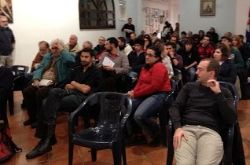 On Monday 29 we drove south to Naples and Caserta, where the meetings were crowded by very young people. 50 attended the meeting in Naples University, despite bad weather conditions and a strike of the local public transport, while in Santa Maria Capua Vetere (Caserta) another 50 people listened to Angelos’ speech. 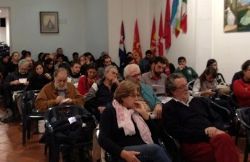 The last meeting was held in Rome where 70 people packed the hall booked for the event. In his speech, Angelos outlined an alternative programme to the one of Syriza’s leadership, an alternative programme that the comrades of Epanastasi have written and that we have translated into Italian and distributed in a special pamphlet in support of the campaign. The Marxists will fight for it in the Syriza conference due in December.

“Syriza’s leadership believes that a slow and gradual transformation through a reform programme is possible under capitalism. We think that the programme of the left must be a revolutionary one or it cannot exist. We are a tendency within Syriza and we are committed with all our forces to the building of the new party. But to be sure that this party will be a viable one, the Marxist tendency has to grow and to change the party’s policy. That is why we need the support of every youth and worker in Italy, to learn from you and to exchange experiences”. He finally thanked all the people who attended the meetings and supported the campaign.

With this tour the Marxist tendency in Italy showed that internationalism is not a hollow word to be uttered in May Day speeches but an absolute priority for everyone who really wishes to change the world and overthrow the capitalist system.