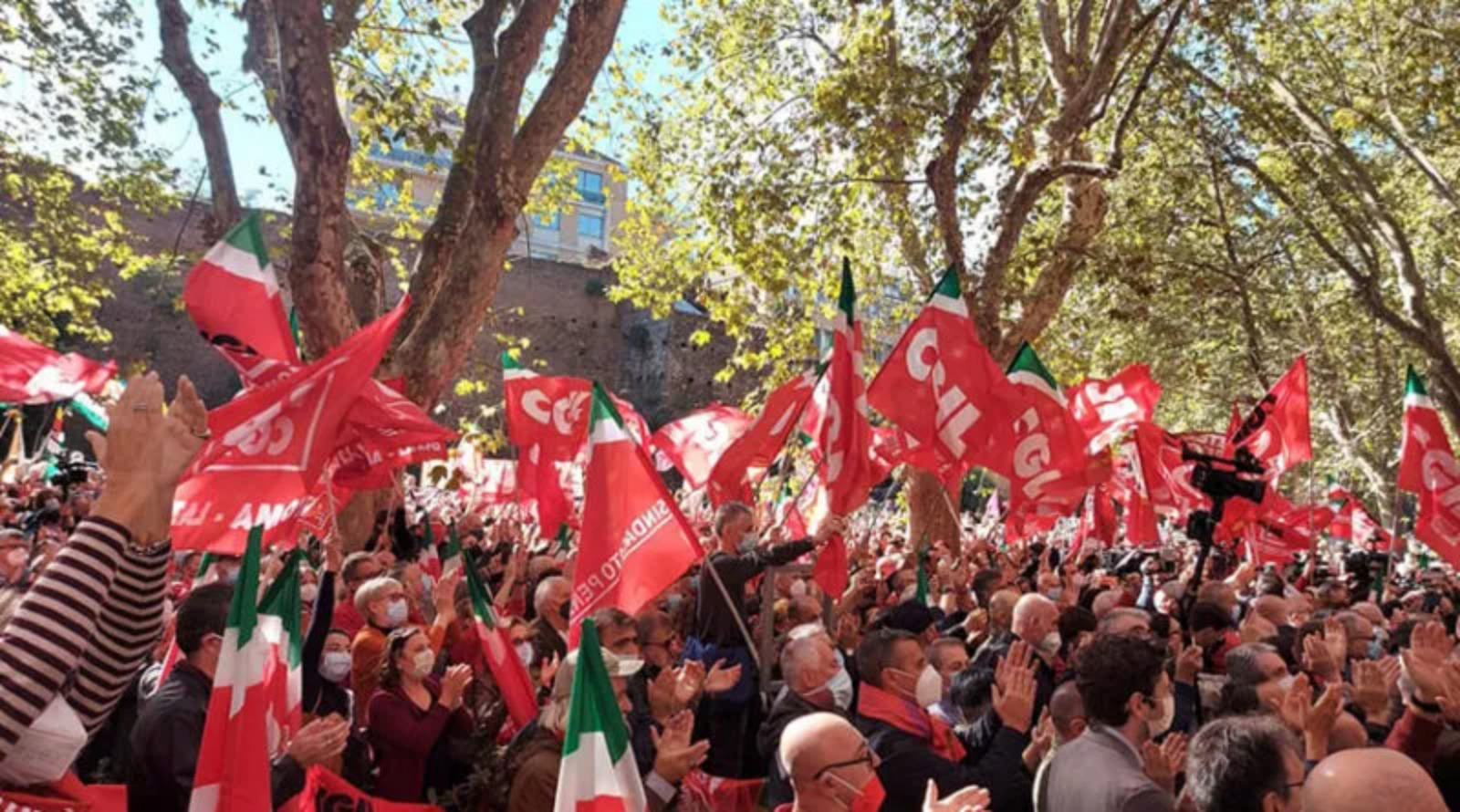 Last Saturday (9 October), hundreds of fascists attacked and vandalised the premises of the national headquarters of the CGIL (Italian General Confederation of Labour) in Rome.

They did so during a demonstration against the so-called green pass (indicating one’s COVID-19 vaccine status), which the government imposed as mandatory in all workplaces on 15 October.

This measure is unleashing anger among a section of the workers (though not the majority), and especially from the petty bourgeoisie and the lumpenproletariat. This confused rage has opened up a certain political space for the right and the extreme right.

The fascists who assaulted the CGIL HQ were granted total impunity by the police, who stood idly by and watched for some time before intervening. The working class reacted immediately to this provocation, with demonstrations and sit-in of thousands of people the next day in front of CGIL offices throughout Italy, and with a planned demonstration on Saturday 16 October in Rome, which promises to be massive.

A new scenario of intensified class struggle is opening up in Italy.

The videos of Forza Nuova fascists breaking into the national headquarters of the CGIL, while smashing whatever happened to be within their range, make one’s blood boil with anger. This was a deliberate attack directed against the workers’ movement and its main organisation.

Fascists spend their miserable existence in a state of racist and homophobic hysteria. The workers’ organisations are their fundamental enemies. For the fascists, any excuse is a good one when it comes to attacking the workers. This is exactly what they did when given the chance last Saturday.

#Italy: A group led by members of the far-right organisation Forza Nuova, attacked and occupied the headquarters of CGIL, the Italian General Confederation of Labour in #Rome, on Saturday evening.#FCKNZS pic.twitter.com/65ufm6hDSd

They were given this opportunity by mobilisations against the green pass, which in Italy are viewed by many workers as a discriminatory measure by the bosses and the state.

The right wing plays a role within these movements. For example, the video recordings of the attack show also the leader of the anti-lockdown ‘IoApro’ movement inside the CGIL office.

We need to give the strongest, firmest and most direct response possible to this fascist attack. Last Sunday morning, all the offices of the CGIL were kept open and manned by union delegates and workers. A national demonstration against fascism has been called for Saturday 16 October.

Saturday's demonstration calls for the dissolution of all the fascist organisations. The need for this is indisputable, and we subscribe to it. However, we cannot be under any illusions that the Mario Draghi government and the “democratic institutions” will dismantle them – as CGIL General Secretary Maurizio Landini believes.

The state apparatus knew the perpetrators of the Saturday attack only too well, and in fact has a long history of collaboration with the far right.

Roberto Fiore, the national secretary of Forza Nuova, fled abroad in the 1980s to escape conviction for membership in an armed gang and came back to Italy only after the prescriptive period elapsed.

The leaders of Forza Nuova regularly perpetuate attacks on migrants, left-wing activists, etc. And yet, they continue to operate undisturbed – so much for the Mancino Law against hate crime!

Giuliano Castellino, leader of Forza Nuova in Rome, had already pointed out that the CGIL offices were one of the main aims of the Saturday demonstration. However, while the whole city was filled with police officers, and strategic buildings were adequately guarded, the CGIL headquarters were left completely defenceless!

Clearly, we cannot trust the state apparatus to solve the problem of fascism.

We are now witnessing a chorus of solidarity and declarations of anti-fascism from Draghi, president of bosses’ organisation Confindustria, Carlo Bonomi and even from the right-wing political parties.

What these ladies and gentlemen fear however is not the fascists, upon whom they will rely for their dirty work when necessary. What they really fear is that this act will provoke a massive reaction that will not only smash Forza Nuova, but also then potentially turn against themselves.

Any measures that might be taken against Forza Nuova (and we still have to see if any will actually be taken) aims at placating the mass reaction. Ultimately they will not solve anything.

The Democratic Party (PD) is trying to capitalise on this mood (especially thinking about the coming elections), with a motion to ban fascist organisations being presented to the Senate. They have no problem, however, being in a national government with openly racist parties.

Draghi personally went to Landini to show solidarity. But the proposal he put forward is just a generalised restriction on the right to protest. It is very easy to imagine that these same restrictions will soon be used against workers at Alitalia, GKN, or anyone who loses their job following the second lifting of firing restrictions on 31 October.

Bonomi also offered solidarity to the CGIL. At the same time, he asked them to remain in the “Growth Pact”: that is, to avoid undertaking any mobilisations, while the bosses squeeze the working class for every drop of profit.

What this “solidarity” offered to the trade union really amounts to is a poisoned chalice that we must return to the sender. We remember how the fascists began their ascent to power by attacking the Chambers of Labour, we also need to remember that fascists have never been defeated through class collaboration. What defeats the fascists is class struggle.

The strength of a trade union lies in its worker members, and in those workers that see it as a reference point in the struggle for the defence of their rights. Bowing down in front of Confindustria and Draghi’s government weakens the CGIL.

Today, millions of workers need a trade union that organises a fightback against the bosses’ policies, lay-offs, exploitation, deaths in the workplace, and discriminatory measures. The best answer to Saturday’s fascist assault is to finally launch this working-class fightback, beginning with a general strike against the fascists, Confindustria and Draghi’s government.