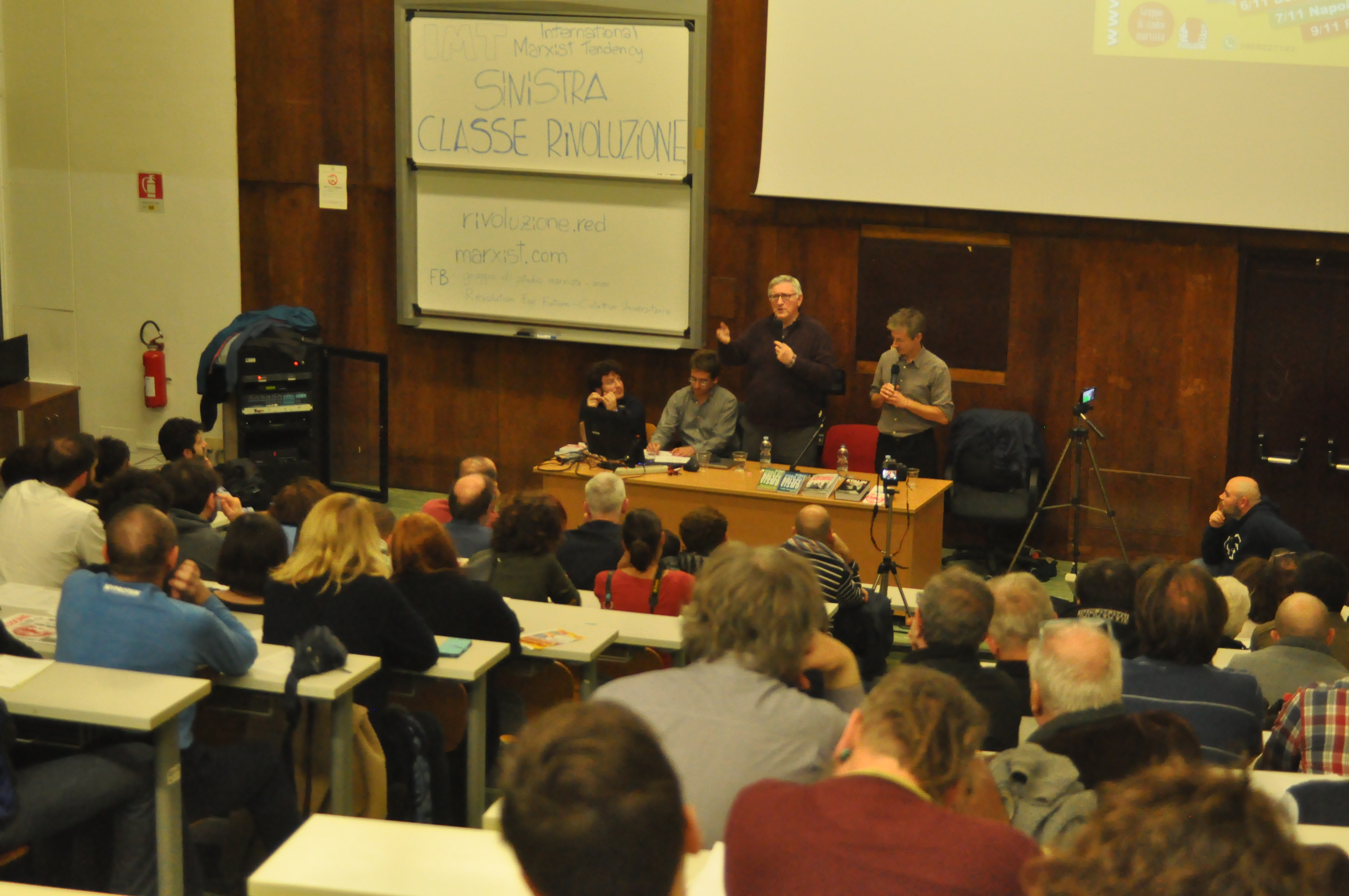 Alan Woods is on tour in Italy for a series of public meetings titled “Revolution for the future: from the History of Bolshevism to the revolutions of tomorrow”, organised by Sinistra Classe Rivoluzione: the Italian section of the IMT. Here is a report of the first two meetings, in Milan and Bologna. Today, Alan is in Naples; and on Saturday, 9 November, he will be in Rome.

Over 100 people attended Alan’s first meeting on Tuesday in a packed-out room of Milan’s State University. Stefano Santangelo, of the Marxist study group at the State University, opened the discussion. stressing the importance of our work in the mobilisations on climate change.

Franco Bavila, editor of the theoretical magazine Falcemartello, focused on the latest developments in the Middle East and in Rojava, where the Kurds have become victims of the aggression of the Turkish army after the betrayal of US imperialism. This is all occurring against a backdrop of major powers, including Russia, carving up the region, trampling over the bodies of the Kurdish people.

This is a very high price to be paid for the mistakes of the leaders of the Kurdish organisations, which have abandoned the struggle for an independent and socialist Kurdish state, instead seeking an agreement with imperialism, which could only lead to this dead end. 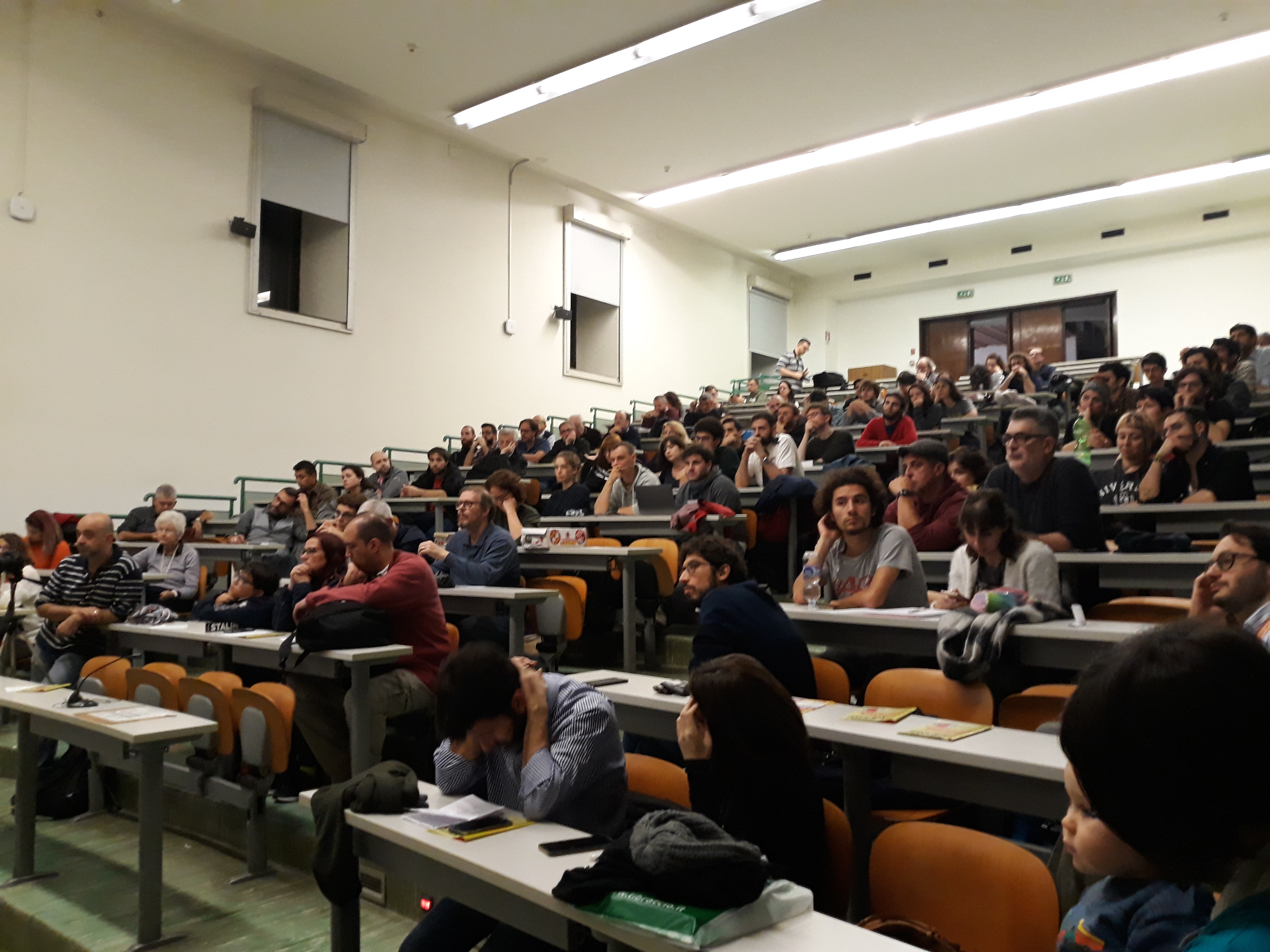 But aside from the grim perspective of war, the resurgence of the mobilisations of the workers and youth throughout the Middle East - from Lebanon to Iraq, following the great events in Sudan, Algeria and Tunisia - can offer new hope to the Kurds, because only the class struggle can defeat imperialism and overthrow local despots. The right of self-determination for the Kurdish people today is possible only in the context of a Socialist Federation of the Middle East.

Then Alan Woods, leader of the International Marxist Tendency and author of Bolshevism: the Road to Revolution (“The History of Bolshevism” in Italian), took the stage. We have published this text in three volumes. The second, which has just been released, addresses the period after the defeat of the 1905 Revolution and the tsarist repression of the workers' movement.

Alan Woods retraced the history of the Bolshevik Party, starting from the birth of Marxist ideas in backward tsarist Russia, touching on the decisive moments of the education of Russian revolutionaries, the theoretical debates and the many difficulties they encountered in a peasant country, where the working class was only just, gradually, beginning to emancipate itself and become aware of its strength.

He went on to discuss the 1905 Revolution, the birth of the Soviets, the role of Trotsky - chairman of the Petrograd Soviet in 1905, when he was just 27 years old - the repression, the underground work, all leading up to the revolutionary explosion of 1917 and the first-ever victorious socialist revolution in October (old-style calendar).

This discussion was both theoretical and historical, but was not addressed in an academic way. As Alan said, there are no real academic Marxists, but Marxist theory is a guide to revolutionary action, and today it is more necessary than ever to build the revolutionary party, in a context in which a revolutionary process is growing throughout the world. 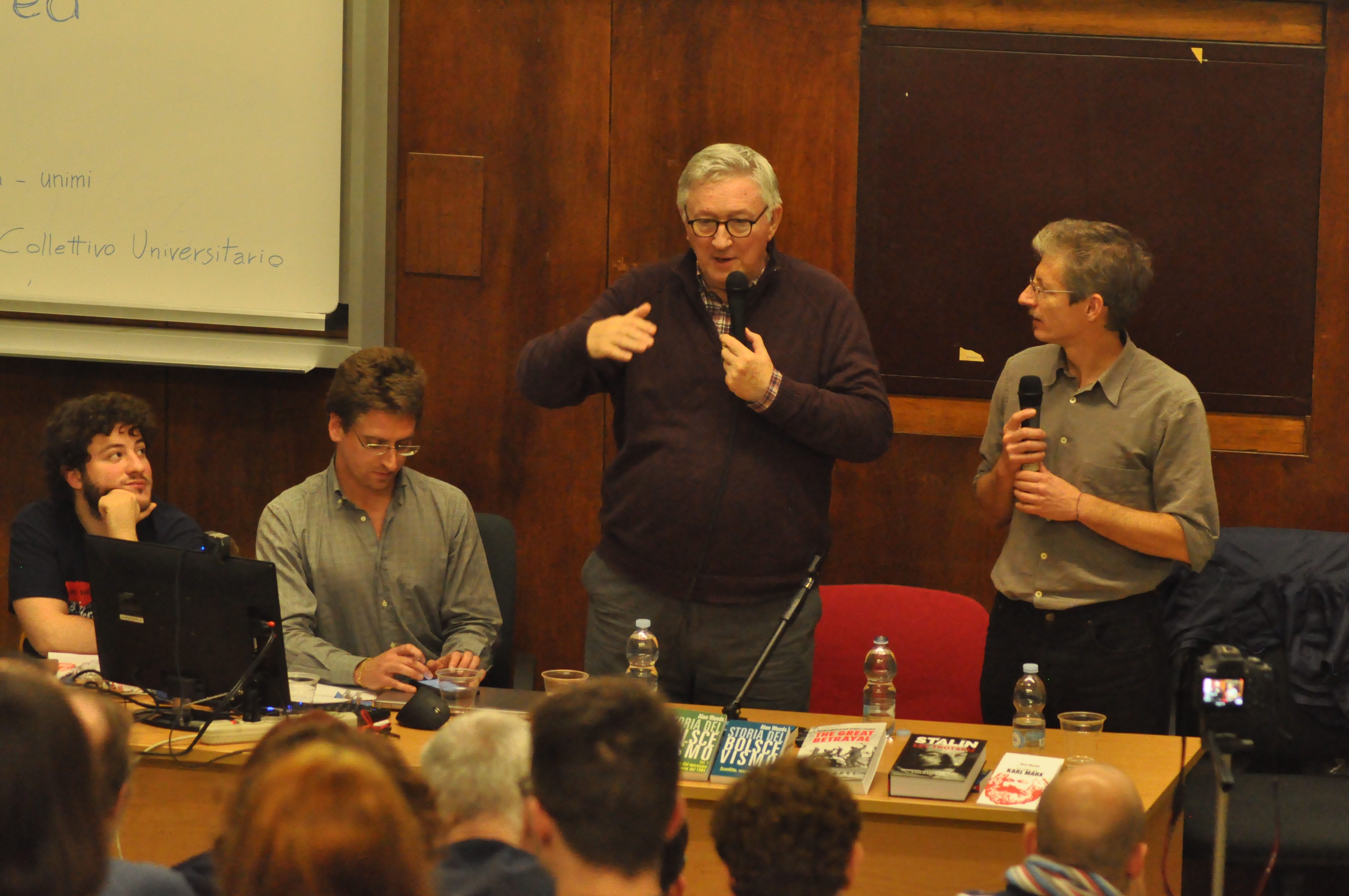 Alan retraced the history of the Bolshevik Party, from the birth of Marxist ideas in backward tsarist Russia to the October Revolution / Image: SCR

The masses are no longer willing to accept the unbearable conditions that they face under capitalism, and they seek to take their destinies into their own hands, as we have seen recently in Chile, Ecuador, Haiti, Lebanon, Iraq, Hong Kong and also Catalonia in Europe.

Alessio Marconi of the national executive of the Sinistra Classe Rivoluzione, and author of the brochure ‘#RevolutionForFuture’ (which went down very well at the last climate strike on 27 September in Italy), closed the meeting. He spoke about how the fight against the environmental catastrophe that is animating millions of young people around the world must be linked to a revolutionary programme to overthrow the system that is the cause of this catastrophe.

The International Marxist Tendency intervenes globally in these mobilisations by proposing an anti-capitalist position. At the international meeting of Fridays For Future in Lausanne, Switzerland, a member of the Russian section of the IMT, Leonid Shaydurov, who built the FFF in Russia, intervened to speak against illusions that the same big corporations and institutions that led us to this situation could stop climate change. He launched an anti-capitalist fraction that received great support. More information is available here.

It is with this perspective that we are preparing for the next mobilisation date of 29 November.

The discussion was broadcast live, watched by more than 100 people, and currently has more than 3,000 total views. Over 30 copies of Alan Woods' books were sold, in particular of the History of Bolshevism but also The Ideas of Karl Marx, and a new edition of Trotsky biography of Stalin, edited by Alan.

In addition to this, we collected around 100 euros, which will be used to cover part of the expenses of Alan’s tour.

The main hall of the Arci Guernelli (which we thank for hosting the meeting) was packed for a meeting entitled ‘Revolution for Future’, introduced by Alan. Over 100 people followed the entire debate, which lasted more than three hours, with great interest.

The success was such that, once the seats were full, the latecomers had to settle on the upper floor, creating a sort of gallery: a bit like a theatre! 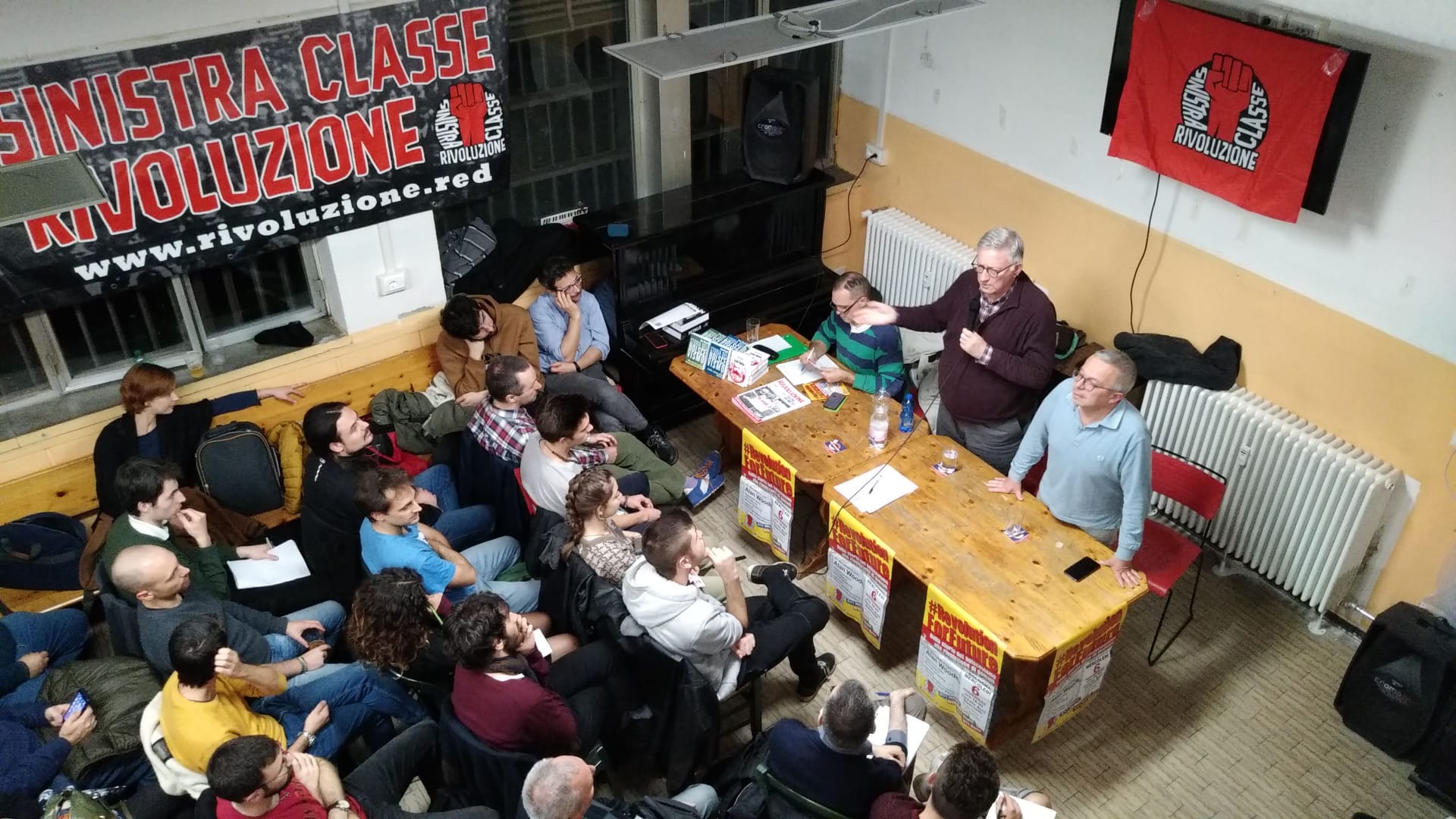 The main hall of the Arci Guernelli in Milan was packed for Alan's speech and the subsequent debate / Image: SCR

After a brief introduction by Domenico Minadeo, of Sinistra Classe Rivoluzione Bologna, Alan's report focused on the history of Bolshevism, the theme of the latest of his book to be translated into Italian.

His speech was light years away from the pedantic and purely academic attitude of many university professors. The history of Bolshevism for a Marxist is full of lessons to be learned for the present times.

"When the Bolsheviks began propaganda work, they were treated with suspicion in front of the factories. Their slogans in favour of a republic were rejected with disdain by the workers, who had a blind trust in the tsar, the ‘Little Father’. Their leaflets were torn up and sometimes Bolshevik activists were even beaten by workers. Then suddenly, within a few hours, everything changed. It was on 9 January 1905, Bloody Sunday, when the tsar's troops fired on a helpless crowd, causing hundreds of deaths. That evening, the workers knocked at the doors of the Bolshevik Party headquarters, demanding arms to fight back.

"Sudden and sharp changes are on the agenda today as well, and we must be ready. The richness of the historical experience of Bolshevism helps us understand how it is not enough to proclaim a party and wait for workers to join it, as sectarians think. We must work from where the masses are, even when they follow the moderates, and patiently explain the ideas of Marxism.

“This is the essence of Lenin's thought. In February 1917, the Bolsheviks were a minority. To conquer the masses they based themselves on a simple slogan: ‘Peace bread and land’, and challenged the Mensheviks to put these claims into practice by breaking with the bourgeois ministers. On the basis of concrete experience, they won the majority in the soviets of workers and soldiers and only then launched the slogan of the insurrection.

“October was not a coup d'état staged by intriguing conspirators, but a real, mass revolution. Hundreds of books and television programs written and conducted by ‘distinguished’ scholars and university professors cannot erase this fact.”

As Alan went on to explain:

“Either you are an academic, or you are a Marxist. You can't be both!"

"Today, the history of the Bolshevik party has an even greater importance, due to the fact that, all over the world, we are witnessing one revolution after another. From Chile to Lebanon, from Ecuador to Iraq. Like a lightning bolt from a clear blue sky, millions have said enough is enough and want a radical change. It is a world revolution, but the question is: are we ready to lead these revolutions to victory?"

Several interventions animated a serious and far-reaching debate. Francesco Cassarà, of SCR Bologna, underlined the importance of bringing the revolutionary ideas of Bolshevism into the current mass movements, such as Fridays for Future. Francesco Giliani, of SCR Modena, denounced the mystifications carried out by the mass media (and in school books as well) with respect to Bolshevism and the Russian Revolution. Margherita Colella, of SCR Parma, underlined the red thread that links the struggle of the Bolsheviks to today's revolutions, like that of Chile, with the masses building bodies similar to the soviets, such as the cabildos abiertos. 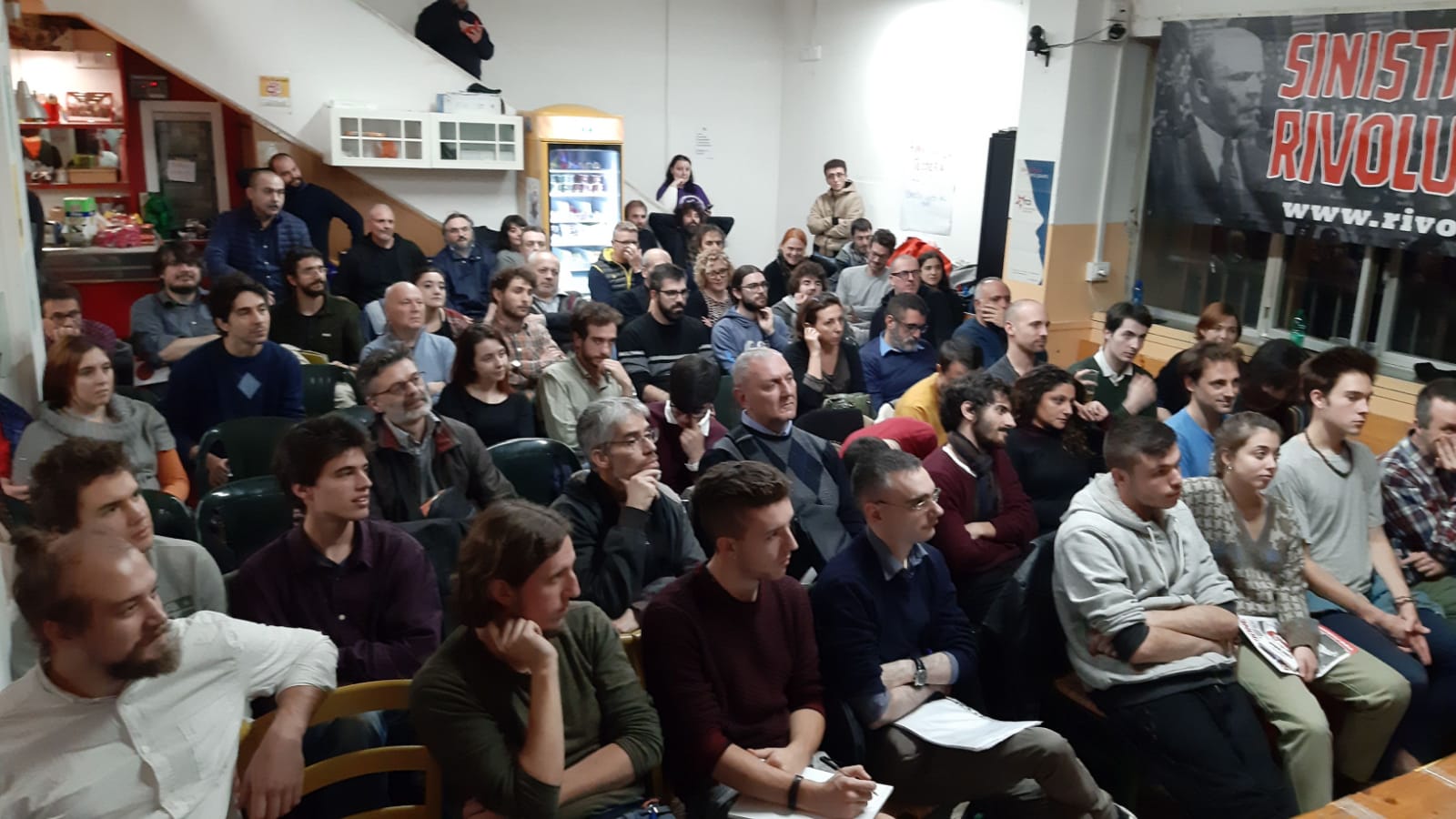 There were also questions and doubts raised by the audience. One young man said: "Many of my friends agree with me, capitalism doesn't work, they say, but then they say they don't want to commit to struggling against it because they want to protect their freedoms as an individual. How can we explain the value of collective militancy to them?”

Another person asked: "But are we sure these are true revolutions in Chile or Lebanon? Or are they isolated conflagrations that will be easily suffocated?”

Alan Woods answered with great effectiveness all the questions raised, albeit in the short time available:

"More than just fires, the mobilisations of these past weeks resemble real explosions. In Ecuador, for example, the government had to leave the capital, which was besieged by protesters. But it is clear that even the best situation can be thwarted due to the lack of the subjective factor. In Russia, if the Bolshevik Party had not been there, indeed if it had not been for two men, Lenin and Trotsky, the revolution would have been defeated.

"In many debates, I often come across people who are reluctant to get organised. I remind them that an individual alone can do nothing, that a worker without organisation is raw material ready to be exploited by the boss. You can try to escape from politics, but politics will look for you. You can take refuge in your comfortable little room, and lock yourself inside and hide under the bed, but politics will knock the door down and pull you out.

"Sceptics and cynics will be swept away by the winds of class struggle, as high tide wipes away all the dirt that remains on the shore, left behind by the ebb of the previous tide.

“We must prepare for the beginning of the new era that has already begun, that of the revolution.

The audience was so enthusiastic and the environment so electric that, as soon as Alan concluded his reply, two of the most famous songs of the labour movement were immediately sung, one after the other: the International and the Red Flag.

There could be no better end to this wonderful evening, which was a success also from a financial point of view, with about 230 euros collected to finance Alan's ongoing tour!