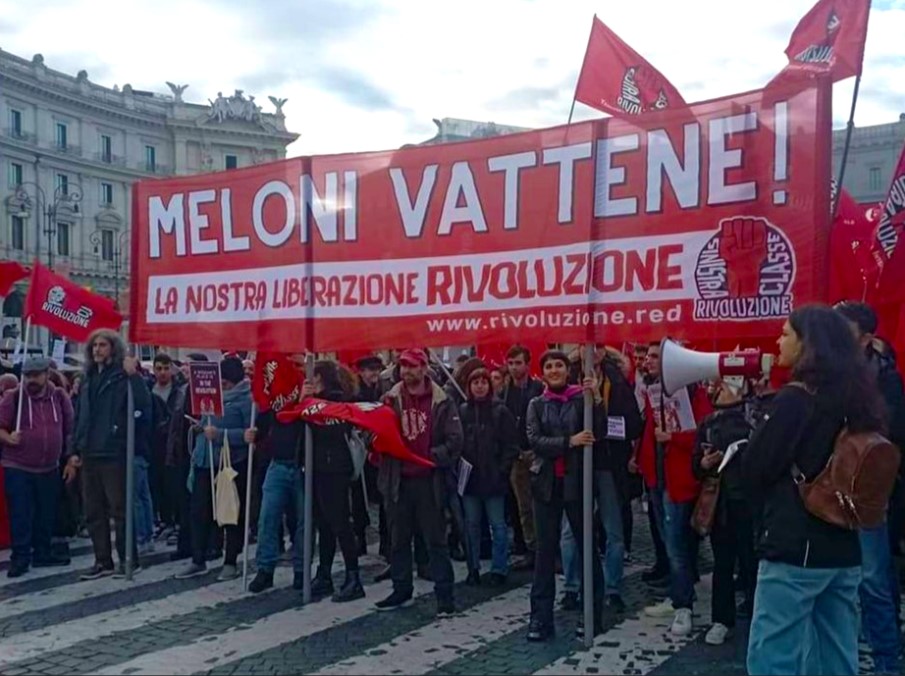 On Saturday 26 November, a national demonstration was called in Rome as part of International Day for the Elimination of Violence Against Women. There were possibly around 10,000 on the demonstration, at most: far fewer than the 100,000 or so of previous years.

The demonstration was called by the women’s activist group “Non una di meno” –“Not one [woman] less” – the Italian chapter of the Ni Una Menos movement. Comrades of Sinistra Classe Rivoluzione (SCR) – the IMT in Italy – participated with revolutionary slogans and banners. The next day, at a meeting held by the organisers, their stall was attacked by self-described activists for women’s rights.

The reason for the significantly smaller turnout was that “Non una di meno” is no longer the movement it was in the past. At its peak, it had gathered various strands within the women’s movement, including the women of the CGIL, the main trade union confederation in Italy, for example. The comrades of SCR were also part of this movement and participated in its activities.

Now, however, “Non una di meno” has seen adherents of Queer Theory predominate within its ranks, who have systematically pushed out all the other groups, associations and movements that do not agree with them. And they have done this with very aggressive tactics, at times involving physical force. They have ostracised most of the various components of the women’s and LGBT movements, including their supporters in the labour movement, with their hooligan methods.

Last Saturday, the comrades of SCR participated, as they have always done, in the demonstration. They marched behind a banner displaying the slogan “Meloni Vattene” (Meloni Out) in large text, followed by a smaller slogan: “Our Liberation is through Revolution”. The IMT comrades were unaware of the fact that theirs would be the only political banner on the demonstration.

The banner of the IMT was picked up by all the mainstream media, but we were also attacked and misquoted with the aim of depicting our comrades as promoting violence, even encouraging physical attacks on the Prime Minister. We were accused of raising the slogan: “Meloni fascist, you will be first on the list”, and other similar statements. Why this falsification? The bourgeois media are trying to criminalise the left by connecting it with a kind of slogan that was present in the 1970s, when there was also a phenomenon of left-wing terrorism, including assassinations of important political figures.

This media campaign has now created a huge scandal, with leading politicians at the forefront. One of these is Daniela Santanchè, Minister of Tourism in the present government, while the Undersecretary of Defence, Isabella Rauti, said that all this is fuelling a climate of hatred, with threats against the Prime Minister. Others attacked “women who hate women”.

What we have in reality is a blatant attempt to use identity politics to divide the movement. These disingenuous cynics wring their hands and say: how can women hate other women? This conveniently ignores the fact that the present government is made up of right-wing, bigoted, sexist and racist elements. As soon as this government came into office it started raising the idea of banning abortion. Is this not violence by women – Meloni and her friends – against the mass of ordinary women in Italy? Why do the ministers of this government only see the supposed violence of a few slogans but ignore the real violence carried out against women every day?

It is worth noting who Isabella Rauti actually is. She is the daughter of Pino Rauti, a former leader of the MSI, (the Italian Social Movement, set up after the Second World War by adherents of Mussolini’s Fascist Party). In her youth, she was a member of the MSI, and then followed her father in a split to the right of the party, to form the Fiamma Tricolore. She eventually ended up with Giorgia Meloni in the Fratelli d’Italia (Brothers of Italy). So she will know a thing or two about violence and violent methods. She is also from a tradition that is utterly reactionary in matters such as women, gay and trans rights. But why let all this ruin a good story? When it comes to “women hating other women'', these people are experts. They hate ordinary working class women to the point that – as we have seen – the government they belong to has even contemplated abolishing the right to an abortion.

Their main focus was to present Giorgia Meloni as a victim of a – fabricated – personal hate campaign. They have all been expressing solidarity with Meloni, and they are demanding that the “women of the left” distance themselves from such slogans and condemn them.

Prior to this, under the influence of identity politics, the self-appointed “leaders” of the “Non una di meno” had demanded that no one should come to the demonstration with political banners. This is an incredible state of affairs. Here we have the most right-wing government in Italy for decades, which has openly attacked women’s rights and gay and trans rights, a government which openly expresses misogynistic, homophobic and transphobic views, and the movement against violence on women is supposed to pretend that it is non-political!

This appeal for no political banners has been issued on past demonstrations but everyone generally ignored it, and various groups and movements would come with their banners. The comrades of the IMT turned up with their “Meloni Out” banner, together with red flags, raising slogans both for women’s rights and against this reactionary government [see article below for the list of slogans].

Video published by La Stampa of our comrades shouting slogans:

The fact that the IMT comrades expressed their positions openly and boldly annoyed the organisers. But what annoyed them even more was the high profile of our intervention, with all the media coverage that it received.

The day after the demonstration, there was a national meeting of the “Non una di meno” movement, which the women comrades of SCR have always regularly participated in. As they have done in the past, they also set up their stall at the venue with their political material. The organisers physically attacked the stall, with several dozen of them breaking it up, throwing pamphlets and leaflets to the floor and trampling on them.

Here we have “women attacking women”, but this type of violence is apparently totally justified when it comes from the organisers: the same organisers who are always condemning violence of any kind, to the degree that even applauding is considered an act of violence! The real reason for the physical attack on our comrades, however, is not the banner, but their sharp analysis of the women’s question, and their refusal to accept theories that divide the movement.

The IMT comrades in Italy highlight the need for working-class unity to fight for the rights of women and LGBT people, together with the need to bring down the present government and fight for a workers’ government. They support the struggle of millions of women with real pressing problems, while at the same time recognising the rights of gay people, lesbians and trans people.

The comrades of the IMT in Italy are opposed to any idea, and any kind of analysis, that leads to the division and fragmentation of the movement. They highlight the fact that the movement must unite and reject any policy that divides us: that pits working men against working women, gay people against women, or women against trans people, etc. All the oppressed must be united around the working class, fighting to change the system as a whole.

We are publishing here a brief statement by the comrades of SCR, together with a clarification of the actual slogans they were raising on the demonstration.

“Non una di meno", the sad degeneration of a movement

After the demonstration against violence against women on 26 November, as comrades of “Sinistra, Classe, Rivoluzione” we attended the national assembly of “Non una di meno”. Just before the start of the assembly, our stall was closed down by physical force by a group of a few dozen leaders of “Non una di meno”, who threw our political material to the floor and trampled on it, openly declaring that their intention was to deny us our freedom to express our ideas, which also happened within the assembly itself when we demanded the right to explain what had happened and to present our positions.

The moment in which Serena of the SCR asks if she can ask a question, and she gets shouted down:

One of the reasons given to us was the “excessive” visibility in the media of our section of the demonstration behind the “Meloni Out” banner. Firstly, we are not responsible for distorted reportage in the bourgeois press, identifying our banner with slogans that we did not raise. Secondly, we think it is important that the movement fight against the present reactionary and bigoted government that since the very day it came into office has declared war on the rights of women and LGBT people. We find it surprising that these positions are considered alien by the leadership of “Non una di meno”. We think that these positions, as well as any others that aim to take the movement forward, should benefit from the right of freedom of expression in the best traditions of the workers' movement, and all movements of struggle.

We therefore find it unacceptable that the leadership of “Non una di meno” has put a veto on these ideas and blocked the development of a democratic, open, genuine and candid discussion. Now more than ever, with a government that is ready to attack the rights of women and LGBT people head-on, we deem it necessary to develop this discussion, and as comrades of the Sinistra Classe Rivoluzione we will continue to do so on a daily basis in the workplaces, in the schools and colleges, and on the streets, with an unshakeable faith in the working men and women of this country in the fight against this government.

We went to the demonstration in Rome against violence towards women with a banner that said: “Meloni Out! Our liberation is through Revolution”. Several newspapers quoted slogans that we never raised. So we are making available here the real slogans we raised during the demonstration.

We claim our democratic right to call for the resignation of a prime minister, and we intend to achieve this goal as soon as possible, in the same way that our comrades in Brazil – who for years went on the streets with the slogan “Fora Bolsonaro” [Bolsonaro Out] – have finally.

[Note: the following are translations, but in the Italian original they have a rhythm, and they also rhyme].