International Marxist Tendency Our history
Share
Tweet
At 10.45am on August 21, Jimmy Deane died of pneumonia after a long illness in a Liverpool nursing home. He was one of the last in the generation of pre-war Trotskyists, who together with Ted Grant, fought to keep alive the flame of genuine Trotskyism under the most difficult circumstances. 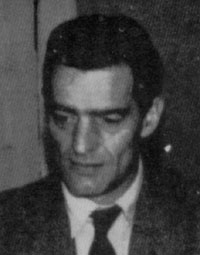 At 10.45am on August 21, Jimmy Deane died of pneumonia after a long illness in a Liverpool nursing home. He was one of the last in the generation of pre-war Trotskyists, who together with Ted Grant, fought to keep alive the flame of genuine Trotskyism under the most difficult circumstances.

An outstanding representative of the Trotskyist movement, Jimmy was a giant of a man in every way, whose presence always made itself strongly felt. This exceptionally talented man was a model of a proletarian revolutionary, and despite being incapacitated by a severe stroke and ill health, remained a committed Marxist to the end.

Jimmy's family had a long and proud revolutionary history stretching back more than a century. Jimmy's grandfather, Charles Carrick Wilson, had been a member of the old Social Democratic Federation, the original British Marxist organisation, and was Labour's first councillor in Liverpool. Later he became an alderman and deputy Lord Mayor of Liverpool.

In the stormy years prior to the first world war, the Irish revolutionary trade union leader, Jim Larkin, a good friend of the family, made frequent visits to the Deane household. Jimmy's mother Gertie, who also became a life-long Trotskyist, also knew James Connolly, H. M. Hyndman, Harry Quelch and other leading figures. At this time, Gertie became an active suffragette and close friend of Mary Bamber.

While a member of the Labour Party, Jimmy Deane was won over to Trotskyism and joined the Militant Group in the middle of 1937 at the age of 16. Through him, his mother Gertie was recruited, and then his brothers Arthur and Brian, who also played an important role in our movement. When the old Militant group split and the Workers' International League was formed in 1938, the Deanes, along with Eric Brewer, Tommy Birchall and Harry Matthews, were won over to the new group, and commenced a long association with Ted Grant.

Tommy Birchall had joined the ILP in 1934 and became a Trotskyist the following year, joining the Marxist League in the ILP. "The comrades decided to join the Labour Party," recalls Tommy. "There we came into contact with Jimmy Deane and his mother Gertie Deane and others, including Arthur Leadbetter. Here they were able to build great influence, including getting five comrades on the Trades Council and Labour Party, which in those days was a joint body, from Kirkdale. In Walton, there was a good grouping around Jimmy and Gertie Deane with representation on the Trades Council.

"The comrades developed a good base on the Trades Council and Labour Party. By the 1938 May Day demo, we were strong enough to organise our own section on the march. We hired a horse and wagon and one comrade made a huge plywood tank and we marched with the slogan 'Not a man, not a gun for imperialist war'. The comrades also carried banners and photos of Marx, Engels, Lenin and Trotsky. It was about this time we became linked to the Workers' International league. By now our group had grown to about 35-40 in number, of which Kirkdale made up 14-15, the rest being distributed between Granby, Walton and Fairfield. This was just about prior to war taking place."

During the war, Jimmy, because of his trade, was in a reserved occupation and went to work in Cammell Lairds shipyards, where he became a shop steward. He played a very active role in the WIL, which was selling over 2,000 copies every issue of Socialist Appeal in Liverpool. He intervened on behalf of the group in the Barrow strike of 1943. Typically, they were attacked by the Stalinists, who at this time were fervently pro-war and against all strikes. But when the Stalinists attempted to slander Jimmy Deane and Arthur Farrager, the whole thing backfired. Asked why they weren't doing their bit for King and Country, Jimmy replied: "I'm doing my utmost - I'm a blood donor," to cheers of delight form the workers.

In 1944, the WIL fused with some other remnants of the "official" Trotskyists to form the Revolutionary Communist Party. In the years that followed, heated disputes with the International leadership and their shadows within the British party developed over a whole series of questions. (See History of British Trotskyism by Ted Grant, Wellred, 2002.) In these, Jimmy had consistently supported the line of the majority of the RCP around Haston and Grant.

In the immediate post-war period, Jimmy became a full-time organiser on trade union work, and concentrated a lot of time on the dockers' struggles. He was elected to the RCP's central committee, and from there, onto its Political Bureau. Jimmy had many funny stories to tell about these years. One was about how Ted Grant was finding it hard to concentrate on writing an editorial for the Socialist Appeal. Comrades were nagging him to get on as the deadline was rapidly approaching to take the paper to the printers. But Ted wasn't having any of it - so they locked him in the office until he had finished the job. After a long while, not a sound came from the office, so they opened the door to find the window wide open and no Ted. Eventually they found him in the local cinema viewing the latest western!

In the crisis in the RCP in 1948-49, when the antics of the so-called leaders of the International and the pressures of the period served to demoralise Haston and the other leaders, Haston came out in favour of entry into the Labour Party. This position was opposed by Jimmy and Ted Grant. However, rather than engage in a faction fight, they hoped to save the leadership by remaining neutral. This turned out to be a mistake. Haston gained a majority and the International demanded fusion with Gerry Healy's group in the Labour Party. This led to the destruction of the RCP and the expulsion of all those who challenged Healy's undemocratic regime.

Both Ted and Jimmy were expelled and left with some 30 people nationally, concentrated in London and Liverpool. They had no alternative but to rebuild the movement from scratch. Figures like Jimmy Deane and his brothers Arthur and Brian, Alec Riach, Sam Levy and others helped to gather funds to launch a new publication called International Socialist, with Ted Grant as its editor.

In early 1950 in Liverpool, Jimmy Deane drew the young 16-year old Pat Wall into the tendency. Pat had joined the Labour Party during the general election, and within two weeks had been made secretary of Garston CLP. "He was very keen to find out more about economics and the theories of Marxism, and was told by councillor Bill Sefton (who ended up in the House of Lords) to go over to Walton and ask the Deanes," recalls his life-long partner and comrade Pauline Wall. "After that he read and read and read. He devoured all the Marxist classics." Pat played a leading role for the tendency on Liverpool Trades Council and in the Labour Party, serving to develop and train up a group of younger comrades such as Terry Harrison. Pat had become a Labour councillor in Liverpool and later in Bingley, and after a battle with the right wing and an investigation by the NEC, later became Labour MP for Bradford North. He remained a committed Trotskyist until his tragic death in August 1990.

The 1950s and early 1960s were the "dog days" of the tendency. Jimmy played a leading role in holding things together and developing the tendency. Although the group was recognised as the official section of the International in 1957, the British section was always in opposition to the political position and intrigue of Mandel, Pablo, Frank and Co. They demanded that the official British section should unite with the International Group to fight Gerry Healy. This was vigorously resisted by a large part of the tendency, but was eventually pushed through. Under the pressure of the International, a shaky fusion took place at a conference at Sevenoaks in Kent in September 1964. Jimmy Deane - the then national secretary of the group - mistakenly heralded this as "a very important step forward for the Trotskyist movement in Britain." He continued: "In adopting its statement on unity, the conference showed its mature attitude towards the differing experiences of comrades and towards the existence of secondary tactical differences."

Unfortunately, there was a lot of wish-fulfilment in this. As usual, the leadership of the International displayed bad faith, immediately commencing their manoeuvres against the British leadership. The "secondary differences" soon developed into sharp differences and things fell apart within a matter of months.

The tendency had learnt a painful lesson on the impossibility of shortcuts. Unification with the Mandelites turned out to be a farce. A misguided attempt to collaborate with the Tony Cliff group in developing the Young Guard paper also ended in failure. In both cases, the main mover was Jimmy Deane, who had illusions in the possibilities of unification. After the failure of these attempts, Jimmy became disillusioned and moved away from active involvement in the movement. He left Britain for a job in India, although he always remained loyal to the ideas. One can say he was a victim not only of the period, but also of the crimes of the so-called leaders of the Fourth.

When I visited him a few years ago, he insisted we leave the nursing home and that I escort him to the nearest pub. Jimmy was always fond of a drink. So we went for a couple of pints and he reminisced about the old days, and especially the vital role Ted had played. He displayed total scorn for the other leaders of the Militant who had hared off in an ultra-left turn. Jimmy was very close to Ted, and they kept regularly in touch over the years. Even when Jimmy lost his power of speech, Ted would still phone him periodically and talk to him about what was going on.

An electrician by trade, Jimmy had always had a great feel for workers, especially the youth, and remains a source of inspiration to all those who have ever known and worked with him. This proletarian revolutionist with his thick Liverpool accent, boundless enthusiasm and impressive presence was a man of tremendous ability, and will fondly remembered by all who worked with him. We send our condolences to Arthur, Brian, Dorrie, Fred and the rest of the family.