Pakistan
Share
Tweet
After waiting for more than a year for the government to act on the promises it made at the time of the earthquake disaster, the workers have finally lost their patience and come out in an all-out strike. This is just a taste of what is to come. 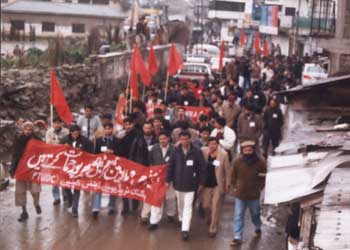 The workers of the devastated region of Kashmir have been on strike since last month. The government of AJK had announced after the calamity of October 8, 2005 that all the loans of public sector workers should be written off and that the government should pay three months salary as a bonus.

Today, 16 months later, the government has failed to fulfill its promise. The workers have waited long enough and finally they have said enough is enough! They formed an action committee comprised of all the associations of different services sectors and called for a token hunger strike at the beginning of this year.

For the whole month of January the workers waited to see if the government would take any notice of their token strike. But the workers were provoked and compelled to go further for a more serious action. The next step of the workers was an all out strike until their demands are fulfilled.

The workers are using their traditional and most powerful tool, strike action, to teach the ruling class a lesson. The lesson they are giving is one of class struggle and above all they are pointing out what Marx explained, that in a decisive stage the proletariat becomes transformed from a class in itself to a class for itself. 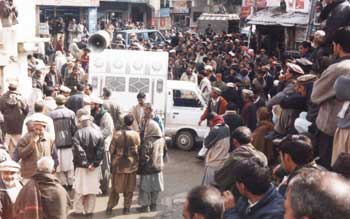 For 14 consecutive days the workers continued their strike. Thus all the activities of the state were brought to a standstill. After 14 days the government called the leadership of the workers for negotiation to end the strike. At the negotiation table the leadership of workers demanded to issue an urgent notification of their demands while the corrupt and puppet government of Kashmir was seeking more time and asked to be given one more month. As a result, on the basis of another promise the strike was called off until March 20.

The PTUDC and the strike 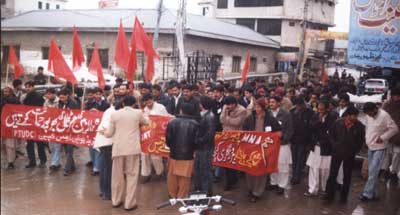 We have to understand the importance of this strike. This strike is more important than any usual strike. For a long period stagnation and inertia had affected the workers' movement in Kashmir. And during this whole period the movement was mainly limited to the youth and students. This is what led to the common conviction that there was no working class in Kashmir, because there is no industry.

When the Marxists started their work in Kashmir they put the position that these services sector workers are the real proletariat of Kashmir. After a long period this strike showed that the Marxists were right.

Again, this is just the beginning of a new wave of class struggle in Kashmir. It also shows that the class question is the dominant question in the present epoch, even in such a remote and backward area like Kashmir. It is an important and significant development in the context of the rapidly expanding Marxist forces in Kashmir. This wave of class struggle is a taste of the music of future. This also shows that only the bringing together of the forces of Marxism with the proletariat of the region can solve the Kashmir question through revolutionary means... and maybe in the not too distant future.