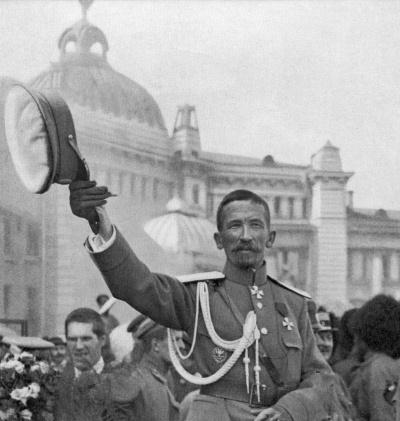 Following the July days, Russia entered a period of reaction. The Bolsheviks were arrested in the hundreds and the advanced workers were under attack. Meanwhile the bourgeoisie regained its confidence and took an ever more open counterrevolutionary position. This mood began to galvanise around the commander-in-chief, general Kornilov, a cossack general determined to drown the revolution in blood.

“The revolution made progress, forged ahead, not by its immediate tragicomic achievements but, on the contrary, by the creation of a powerful, united counter-revolution, by the creation of an opponent in combat with whom the party of overthrow ripened into a really revolutionary party.” (Karl Marx, The Class Struggles in France, 1848-1850)

“Had the Bolsheviks not seized power, the world would have had a Russian name for Fascism five years before the March of Rome.” (Leon Trotsky, Stalin)

“There is a way of fighting the subversive forces which can rally the masses of the people, properly led, to value and wish to defend the honour and stability of stabilized society ...  the necessary antidote to the Russian poison. Hereafter no great nation will be unprovided with an ultimate means of protection against the cancerous growth of Bolshevism.” (Winston Churchill on the rise of fascism in Italy, The Times)

Following the July Days, the Social-Revolutionary Alexander Kerensky became Prime Minister and his reformist government of SRs and Mensheviks issued a series of oppressive measures against the Russian masses. Key divisions of the Petrograd soldiers were disarmed and many regiments were disbanded or sent to the front. There were also attempts to disarm the Petrograd workers, but they largely resisted. Hundreds of arrests were made and the death penalty was reintroduced for dissidents on the frontline.

The treacherous Soviet leaders attempted to justify these measures to the Soviets under the pretence of a threat from the right. In fact, these actions were taken in service of the Russian bourgeoisie and actually emboldened the forces of open reaction.

The events of June and July demonstrated that the government of compromise was unsustainable. The reformists had felt the full force of the Petrograd masses, indignant at their leaders’ inaction and subservience to imperialism. On the other hand, they were now coming under immense pressure from the liberal Cadet Party and even more zealous reactionaries to discipline the revolution by force.  Instinctively, these so-called leaders of the working class leaned on the bourgeoisie to avoid meeting to the demands of the masses. Having exhausted more timid military bureaucrats in the failed July offensive, with the aim of restoring order Kerensky appointed a Cossack General, the arch-reactionary Lavr Kornilov, as commander-in-chief of the Russian army.

Kornilov set out conditions for his appointment which hinted at what was to come: “Responsibility only to his own conscience and the people; no interference in the appointment of the high-commanding staff; restoration of the death penalty at the rear.” Among these conditions, the SR-Menshevik government’s main quibble was with “responsibility to the people”. Meanwhile, government ministers were negotiating behind the scenes to persuade bourgeois Cadet politicians to rejoin them in power.

At the same time, Bolshevik centres had been raided, their printing presses had been destroyed, there were arrest warrants for Lenin, Kamenev and Zinoviev, who had been driven into hiding, and Trotsky and Lunacharsky had been arrested. Even Lenin was preparing for a considerable period of reaction in Russia – as had happened after the 1905 Revolution, his own capture and possible execution, and the potential decimation of his party.But events were to transform much more sharply in a different way.

In mid-August, a state conference was held in Moscow (at a safe distance from the vanguard of the masses in Petrograd) with the expressed aim of uniting all the forces in society, from landlords and capitalists to Black Hundred thugs and monarchist zealots to the workers and peasants of the Soviets, behind Kerensky’s government. The conference backfired, only serving to condense the irreconcilable class divisions of society within a single room.

Feeling confident after the partial victory over the Petrograd masses, the bourgeoisie were in no mood for compromises. They were determined to crush the revolution once and for all. The focal point of this radicalisation of the possessing classes became General Kornilov. In this endeavour, Kornilov (and the bourgeois counterrevolution) had the full cooperation of Kerensky. Kerensky aspired to crush the revolution with the help of Kornilov in order to rise as a bonapartist dictator. Kornilov and the bourgeoisie however, could not see any need for Kerensky once the soviets had been crushed.

On the other hand, a general strike in Moscow during the course of the conference signalled the regrouping of the working class following the repression of July. The Bolshevik Party faced heavy repression, yet its consistent opposition to the government and the correctness of its slogans meant that it grew exponentially on the ground as the class struggle picked up again. The two fundamentally opposing classes were heading for a direct confrontation.

A group of Russian generals, led by Kornilov and with the full knowledge of Kerensky, hatched to a plot that would result in the excuse they needed to openly attack the revolution. The generals planned on deliberately allowing the German army to break through the Russian line and then take the city of Riga in Latvia. At the same time provocateurs were supposed to either provoke the Petrograd masses or otherwise pretend to be Bolsheviks ravaging the city. Thus, Kornilov could march on Petrograd in order to “restore order” and crush the so called Bolshevik German agents and the Provisional Government which was supposedly acting under Bolshevik pressure. The programme of the generals and the Cadet Party was a full restoration of “order”, that is the abolition of soviets, factory committees and soldier committees. They also demanded the reintroduction of the death penalty, not only at the front, but also for workers who “sabotage” in any way the working of industries which had anything to do with the war effort - at that point that was nearly all of industries.

Anger heightened among the masses as they saw through this plot. Under pressure from below even most of the SR and Menshevik leaders began to speak out against the officers and suggested that a conspiracy had begun with the July offensive. Kerensky was more than ready to meet Kornilov’s new demands that he should be allowed to come down on the soldiers in the strongest possible terms. However, with class struggle simmering in Petrograd, he was worried about the response of the workers and soldiers in the capital. Kornilov was duly asked to send a cavalry corps, among the most backward elements of the army, to Petrograd to control the streets. Kerensky knew what he was risking with this request – but he felt safer dealing with a Cossack general than with the Petrograd working class.

Yet Kornilov was not beholden to this spineless head of government. He had been preparing an all-out assault on Petrograd since the beginning of August, the most reactionary garrisons of the army into position ready to strike. And Kerensky had given him the opportunity he needed. Kornilov wasted no time in tearing up the terms of agreement he had with Kerensky and setting an attempted coup in motion.

What he hadn’t reckoned on – what no one involved or watching on among the ruling class had reckoned on – was the strength in number and resolve of the highly-organised, Bolshevik-led Petrograd masses. Compared to Kornilov’s forces, the workers and soldiers of the capital were a colossal force, determined to defend the revolution at any cost. At the first sign of danger they immediately convened meetings of the district soviets and organised a powerful workers militia. Kerensky, seeing that his own life might be in danger, had no option, but to turn to these masses and their Bolshevik leaders for help. The same Bolsheviks who had been so viciously slandered by Kerensky and other reformists only a month earlier, were now being brought in as the only people who could mobilise the masses. Of course none of the Bolsheviks in the prisons were freed. Neither was the arrest warrant for Lenin rescinded. Nevertheless Lenin and the Bolsheviks seized this opportunity to call for a united front of all workers’ parties, regardless of differing lines on other questions.

Kornilov’s insurrection was no match for the Russian working class. The insurrection was declared on 27 Once Kornilov had declared the insurrection, on 26 August (old style calendar), the full forces of the working class were ready to take him on. Within three days, the coup had disintegrated. The Kornilovists had their telegraphs intercepted by the telegraph workers, their trains were either stopped or rerouted and a swarm of agitators surrounded them in every town, village or train station they reached.  As the truth about the mission dawned on the Kornilovist troops, they began to break along class lines. The insurrection disintegrated without firing a single shot.

The Kornilov putsch, while itself an abject failure, did sound a warning for the Russian Revolution. It made clear to the working masses, in the starkest terms, that vacillating government of compromise had absolutely no control over the situation. The only real alternative to the workers and soldiers taking power into their own hands through the Soviets was the most rabid form of reaction, a bloodthirsty Bonapartist general supported by the pro-tsarist elements of the army and gangs of Black Hundred fascists. Such a figure would rear its ugly head again after 1917 in the form of Alexander Kolchak among others, during the Russian Civil War. It is safe to say that if the Russian working class had not had a highly-organised revolutionary party with a clear and far-sighted leadership, in the form of Lenin and the Bolsheviks, a Kornilov or a Kolchak would have drowned the Revolution in blood. What happened elsewhere to revolutionary Europe over the following two decades, where a series of fascist governments came to power on top of failed revolutions, bears out this theory.

Following the insurrection, the counterrevolutionary forces came under immense attack by the masses. Within the army a massive rebellion took place and Kerensky had no other option but to eventually arrest Kornilov himself. Meanwhile, what little authority Kerensky and the leaders of the reformist parties had left disintegrated quickly. While the Bolsheviks had stood with the masses all along, it was obvious that Kerensky and his band of invertebrate reformists had been responsible for the repressions carried out since July, and had leaned on the workers and soldiers only at the last minute to save their own skin. The leading role that the Bolsheviks played in organising the defence of Petrograd in the committees, garrisons and militias, as well as in agitating among Kornilov’s forces outside of Petrograd, had ensured that the coup never stood a chance. It shored up their position as the heirs apparent to the leading bodies of the Soviets, and thus the Russian working class as a whole.

In one Soviet after another, the Bolsheviks, who were only a tiny minority in February, started winning key votes and positions. Having participated in the defence of Petrograd, the Bolsheviks never supported Kerensky. They heavily criticised him for not only failing to defend the revolution, but also for being party to the plot itself and for forming an ever closer alliance with the counterrevolutionary bourgeoisie. There remained no middle road. The only alternative to bloody counterrevolution now, was the transfer of power to the working class and the peasantry. This was now abundantly clear, not only to the Marxists, but also to the masses. The actions of the Bolshevik party during the July days and in the fight against Kornilov, had welded an iron bond between the party and the masses. This was the fundamental political and organisational precondition for the victory of the October revolution. After Kornilov, all the attention of the party and the masses was focussed on the immediate preparations for taking power.