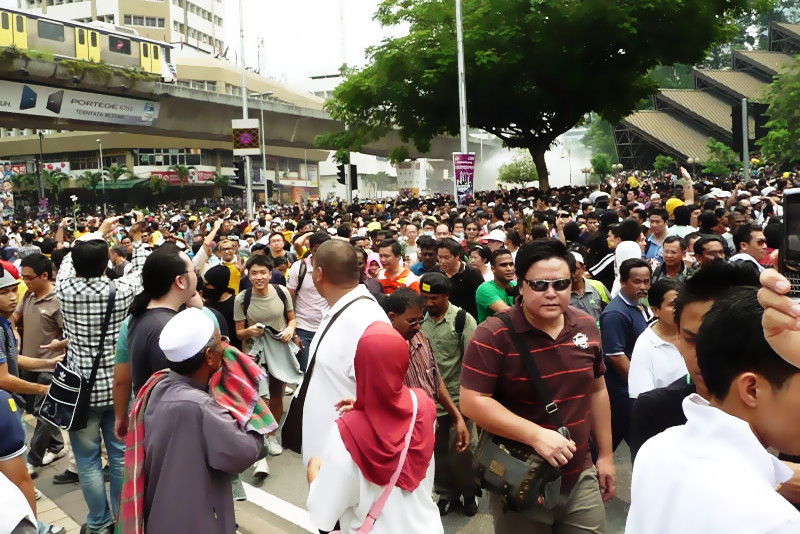 Peace and harmony – the crown jewels of any ruling class in every epoch. On July 9th, a 50-thousand strong demonstration in the heart of Kuala Lumpur robbed the Malaysian ruling class of this peace and harmony. Organized by a coalition of NGOs and civil societies who call themselves the Bersih 2.0 coalition, the rally shook Malaysia to its core.

Learning the lesson from their counterparts in the Arab countries, i.e. that it should not show any sign of weakness, the UMNO-led government quickly cracked down on the demonstration weeks before it even began. The first section of the movement that they attacked was the socialists from the Malaysian Socialist Party (Parti Sosialis Malaysia, PSM), knowing full well that this is the most dangerous element within the movement: a political party with a programme. The ruling class understands that NGOs, civil societies, and all sorts of liberal democratic elements alike, because of their very nature – vacilating in the moment of truth, hesitating when moving forward – can never provide a political leadership to seriously challenge it. A political party is needed, one with a socialist programme that can give an organized political expression to the movement. The PSM has the potential to become this political party. In the past few years, the PSM has been growing strong and its voice is gaining an echo amongst the oppressed layers. It won its first MP two years ago. This has become a cause of deep concern for the ruling class.

Two weeks before the demonstration, thirty members of the PSM, amongst them the PSM member of parliament, Dr. Michael Jeyakumar Devaraj, were detained while promoting the planned Bersih 2.0 rally. The charges: waging war against the King and attempting to revive the Communist Party. The truth is that any revolutionary who is serious about bringing about genuine democracy to Malaysia will have to wage a struggle against the King, this feudal relic that belongs to the museum of antiquity. Any revolutionary who is genuine about ending poverty in Malaysia will have to revive the ideas of communism, the only idea that provides real solutions to the problems created by capitalism.

The Malaysian ruling class threw away their entire democratic facade in the face of a mounting opposition from the masses. More than 1600 people were arrested on the July 9th demonstration, on what could have easily been a record number of arrests in a single day in Malaysia. The Ministry of Communication and Culture, Dr. Rais Yatim, said that the police "shouldn't always smile and pat people's back... if the police are like that, regular people won't feel any fear. We don't want police who smile too much or too soft that they cannot protect the state." A culture of fear is what this Ministry of Culture wants to promote.

It is true that the Bersih 2.0 demands are very moderate by any standards. They ask for reforms in the electoral process and an end to corruption and dirty politics. However, these demands  assume quite revolutionary connotations in this period of world turbulence. Thus, the government cannot tolerate even mild reforms, particularly not after what has happened in the Arab world where one regime after another is being rocked by mass movements. The events in the Arab world clearly worry them. The UMNO woman youth leader said that what has happened in the Arab countries shouldn't be adopted as an example to be followed by the people. In the meantime, the UMNO-led government swiftly learned from the Arab leaders on what needs to be done. The conclusions it has drawn are that if you vacillate you will end up like Ben Ali and Hosni Mubarak, and if you show strength you can prevail like in Bahrain, Libya, and Syria. The Ministry of Women and Family even threatened that she would take away the children of the protesters at the demo, clearly learning from the Syrian authority that has done exactly that – and way more – to Hamza al-Khatib and many of his peers.

With its full control of the media, the government tries to portray the movement as "haram", as un-Islamic. It resorted to threats and arrests weeks before the planned demonstration, yet tens of thousands were still on the streets of Kuala Lumpur and millions more have shown their support – albeit passive – for the movement. This is partly because in its very essence the movement goes beyond the democratic reforms that it demands. The electoral reforms are just another way for the people to say that they want a democratic election which will sweep aside the hated UMNO and bring about a change of regime. This desire has yet to crystallize into an organized political expression and in its confused form finds itself in this mishmash of NGOs and civil societies.

Behind these democratic demands, there is a question of bread. Income inequality in Malaysia is very acute. While the government often boasts that the country is more prosperous than its cousin in the south, Malaysia has a higher Gini coefficient than Indonesia: 49.2 as opposed to 34.2 according to the UN report in 2007. The same report also reveals that the richest 10% in Malaysia has an income 22 times that of the poorest 10%. This is the real material basis of support for the Bersih 2.0 movement. People's desire for democratic change almost never stands on its own. It is connected to economic problems.

The July 9th demonstration, and the crackdown and reaction that followed, was an event that has accelerated the development of the political consciousness of many Malaysians. A quick scan on internet forums and many comments in news articles clearly shows that many youth are being affected by this event. They are not buying into the lies propagated by UMNO and the government.

What is next? This is the question that is in the minds of many people. An NGOs-led mass movement is not – and has never been – capable of bringing about systematic change in society. Responsibility then falls on the shoulders of the working class, the most organized layer of the masses. The working class has a responsibility to lead this movement to a higher level and give it a class character. Through their trade unions, the workers need to call for a general strike. Mass rallies coupled with strikes will be a stronger weapon. If the Malaysian rulers can take lessons from the methods of their Arab counterparts, then the workers in Malaysia should learn from the Tunisian and Egyptian workers. Without the active involvement of the workers as a class for itself, Ben Ali and Hosni Mubarak would not have been pushed out. This should be – and can only be – the next step for the Bersih movement if it wishes to succeed.