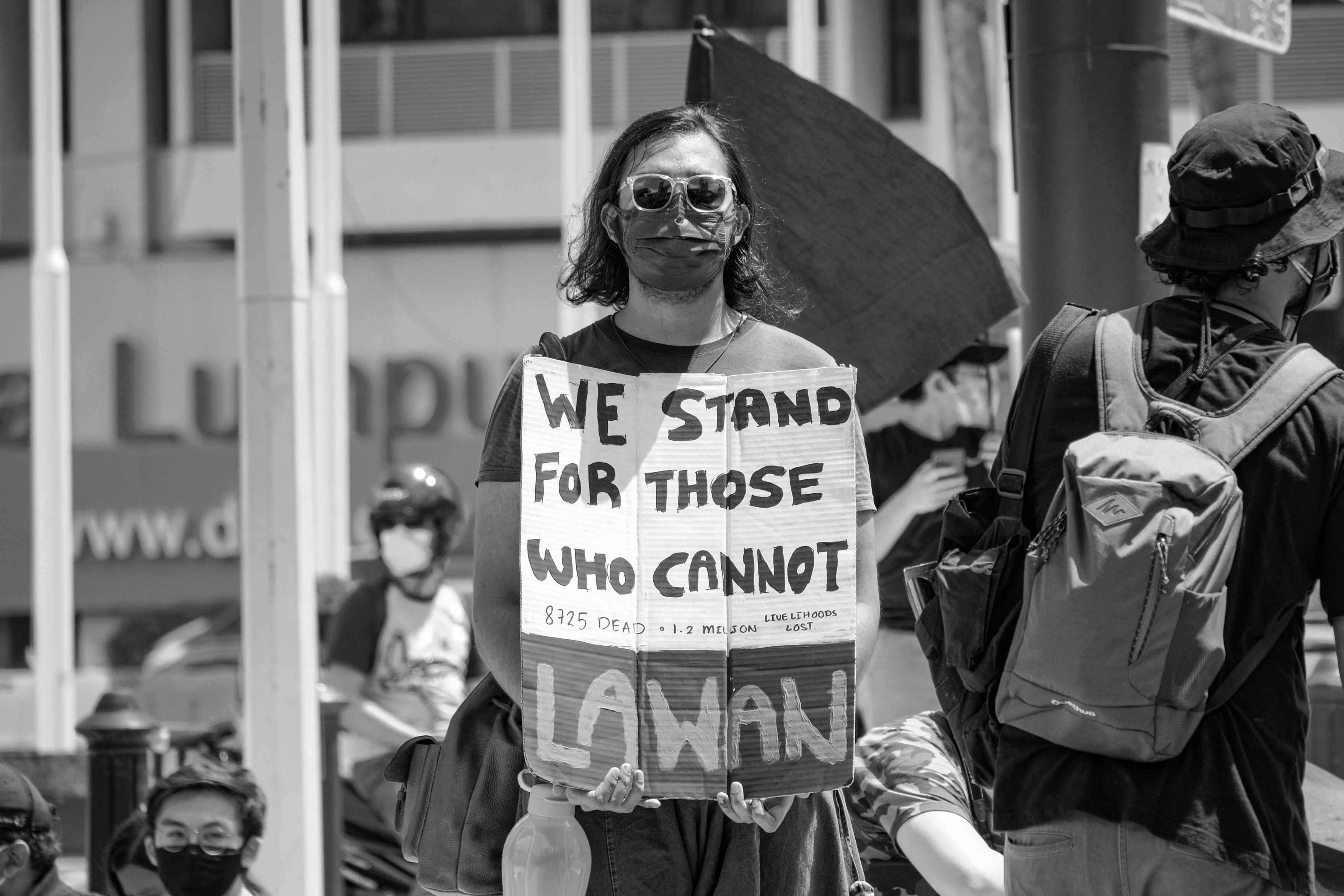 Malaysia’s intensifying social and political crisis has reached a new height. Weeks of chaotic infighting within the ruling coalition, which have involved the monarch, led to the de facto collapse of Prime Minister Muhyiddin Yassin’s majority in parliament. While the ruling class is splitting at the top, the youth are protesting on the streets, doctors are striking, and across the board, the masses are expressing discontent against the regime.

Knives out in the palace

The current governing coalition of Malaysia, with Muhyiddin’s right-wing coalition Perikatan Nasional (PN, National Alliance) at its head, came to power through a parliamentary coup known as the “Sheraton Move” in 2020. Now, its 17 months of undemocratic rule appear to be coming to an end.

With this withdrawal of support, Muhyiddin’s PN has lost its majority in Malaysia’s Parliament. UMNO now joins a chorus of opposition politicians calling for Muhyiddin’s resignation, which they are currently unable to legally force, given that Muhyiddin indefinitely shuttered parliament on 1 August, citing COVID-19 cases during the sessions.

Conveniently, this postponement came as opposition parties filed motions of no-confidence against the government, and as hundreds of protesters gathered in Kuala Lumpur calling for the resignation of Muhyiddin, a full parliamentary session, and an automatic loan moratorium for all.

Why has UMNO, a right-wing Malay party with deep roots in the establishment, decided to abandon Muhyiddin now? Ostensibly, it has claimed that it has done so in defence of “the King and the constitution”. Muhyiddin’s cabinet unilaterally revoked emergency lockdown measures on 26 July when such a move was supposed to be reviewed by the legislature on 1 August. The hasty measures provoked a rare rebuke from the King, with all the opposition politicians gasping in horror at the Prime Minister’s insolence.

But the real calculations behind these parliamentary manoeuvres express baser motivations. In Malaysia’s political landscape, the working class is completely unrepresented. Instead, all the major parties are divided along ever-shifting ethnic, regional, factional, or other lines of patronage, each competing for a greater share of the profits looted from the exploited masses.

In UMNO’s case, Muhyiddin’s split from their own ranks in 2018, contributing to the end of their decades-long rule over Malaysia. Additionally, Muhyiddin’s reluctance to cover for former UMNO Prime Minister Najib Razak in the latter’s corruption trial, added to a list of many grievances. Thus, they saw an opportunity to pay back Muhyiddin’s betrayal in kind, and raise themselves once more into government.

From bad to worse

However, the enormous instability in Malaysia did not begin in the past few days or weeks. As mentioned, the current unelected Muhyiddin government was the product of a parliamentary coup in February 2020.

At that time, Muhyiddin’s BERSATU party torpedoed its own coalition government (known as the Pakatan Harapan, PH, or the ‘Alliance of Hope’). This was an alliance with bourgeois liberal parties that was voted into office in 2018. BERSATU left that coalition so that it could form a new coalition, the PN, with parties from the conservative right wing (including UMNO).

This produced an outcry, especially among Malaysian youth, who had looked to PH to end the decades-long era of corruption and ethnically divisive policies under UMNO.

As elsewhere, with the arrival of the COVID-19 pandemic, the existing contradictions of capitalist society burst to the surface in Malaysia. After some successes in maintaining low infection rates in the initial stages of the disease’s spread, Malaysia’s pandemic is by now decidedly out of control.

According to Al Jazeera, which likened Malaysia to a “mini-India”, the country’s daily infections and death count per capita have surpassed India’s peak. At the end of July, Malaysia’s daily cases per million people officially stood at 515.9, and its daily deaths per million stood at 4.95. By contrast, at its peak, India officially reached 283.50 cases and 3.04 deaths.

The economy, in turn, was devastated by the pandemic and the ensuing lockdown measures. It is estimated that up to 2 million jobs could be lost in 2021. The mean monthly salaries and wages of Malaysians in 2020 were 9 percent lower than in 2019. The rate of poverty rose by 8.4 percent in the same year, meaning that around 2.4 million people have now been plunged below the poverty line.

The harsh lockdown measures hit the poor especially hard. The bottom 40 percent of income earners, most of whom are wage labourers, have seen their jobs put at risk in the course of lockdown measures. The hunger that resulted from not being able to afford food has forced the poor to appeal to their neighbours for help by hanging up white cloths or flags at their doors, signaling that their household is in distress.

A hashtag  #benderaputih (white flag) sprung up on social media to organise food drives and mutual aid networks to cope with this wave of poverty and hunger.

The #benderaputih (white flag) campaign has gained momentum on social media in a bid to encourage people to help others in distress during a prolonged lockdown in Malaysia https://t.co/BOLNuDfFQJ pic.twitter.com/SvFKx649As

The misery under these conditions also led to a mental health crisis. Almost four suicides per day were reported to the police in the first quarter of 2021.

The disastrous policies of the unelected PN government in handling the pandemic are almost identical to the policies that allowed the pandemic to reach a crescendo in India this year. After some initial successes in 2020, the overconfident government began to allow election campaign rallies in Sabah, the poorest state in Malaysia.

This political opportunism then led to the first genuine outbreak in Malaysia, as Al Jazeera explained:

“In total, 257 rallies were approved and many were held with little social distancing, mask-wearing or adherence to health guidelines. On election day, 1.1 million voters turned up at polling stations.

“Researchers from the National University of Singapore found that the Sabah election contributed 70 percent of cases in the state itself and at least 64 percent in the rest of the country.”

Essentially, these rallies opened the floodgates for the virus to reach the least-prepared areas in Malaysia with the worst healthcare infrastructure. The virus thrived in these conditions, in the same way that it thrived in the slums of India and Brazil.

The lacklustre containment effort was exacerbated by the deep divisions that rendered the government from top to bottom – with political parties, factions, and regional interest groups far more concerned about blaming and undermining their adversaries than in coming together to build a united effort to control the outbreak.

None of the above calamities are caused by the virus. The disease merely exposed the rotten reality of Malaysian capitalism, which is currently governed by an unelected coalition. This fact is now being recognised by the masses.

Anger in the streets

The disastrous situation and the endless political manoeuvres waged by the politicians are now unleashing anger in the streets. In the past few days, hundreds of young people have defied the harsh ban on public gatherings and have come out onto the streets of Kuala Lumpur demanding the resignation of the Muhyiddin regime.

The Diplomat reports that:

“Nationwide protests led by young people have been gathering momentum over the past week, with thousands of youth protestors staging sporadic rallies throughout the year on issues like voting rights, job security, and democracy.”

Prior to the street protests, people all over the country began to hang up black flags in their homes in addition to white flags. Black flags signify a call for the downfall of the current government. The hashtag #BenderaHitam (black flag) has been spreading on social media. Another keyword, “#Lawan” (struggle), has also been gaining traction.

After Negaraku #LAWAN calls for @MuhyiddinYassin to step down pic.twitter.com/Lm4BARvr2u

In the recent street protests, many protesters have been seen holding both the white and black flags, signalling that they are linking their economic woes with the need to topple the Muhyiddin regime.

Towards these outcries, the state has responded with repression. The police launched an investigation into the Black Flag movement, accusing it of “sedition.” On 25 July, the police summoned Black Flag participants, who were organising a national car convoy of Black Flag protesters.

The arrogant bourgeois politicians, the culprits of the present situation, have dismissed both the White and the Black Flag movements as “political propaganda.”

At the same time, junior doctors and medical staff around the country have been going on strike. Over 20,000 doctors, many of whom are frontline medical workers, are striking against the Muhyiddin government’s insane policy of only offering them two further years of fixed contracts, with dismal terms and conditions, rather than permanent posts during the pandemic.

Workers and youth can only trust in themselves

Dramatic events are being prepared in Malaysia. The impending fall of this unelected coalition is only the beginning.

Right now, it is very possible that Muhyiddin and his clique will not survive the current parliamentary intrigue against them. On 4 August, Muhyiddin announced that there will be a motion of confidence in his government in September for which he is now desperately building up support. The opposition parties have begun a festival of horse-trading, with many different coalitions being proposed to replace the PN. The King’s attitude and role will be decisive in determining the outcome, and Muhyiddin is likely to remain in disfavour of the monarch after the recent public clash between the two.

But no matter who replaces the PN as the new ruler of the country, it will become painfully obvious to the masses that nothing will change. The various bourgeois parties are seeking to take advantage of the instability for their own narrow interests, but they have no solutions to the misery affecting the masses. Therefore, whatever happens in the coming weeks, it is inevitable that the movement will return.

What a day. It's been long since we see Anwar, Mahathir, Shafie, Mat Sabu, Lim Guan Eng, all standing together beside each other. Oppositions unite! pic.twitter.com/yAK2m3oL1A

The workers and youth should be particularly mindful of the deplorable role that bourgeois liberals in Malaysia will try to play in the coming days. As evident from the tweet below, they are posing as an alternative to the present conservative political bloc in order to divert it into safe channels.

The workers and youths of Malaysia should carefully study the lessons from the recent Thai and Burmese struggles to avoid the same mistakes that these movements fell into. The bourgeois liberals did nothing but hold back the workers and youth, helping to drive these class eruptions into a bloody impasse.

The conclusion is clear: Malaysian workers and youth must trust themselves and no one else. The neighbourhood networks that sprung up from the White Flag and Black Flag movements should set about linking up with the workers and trade unions. All attempts to divide workers along ethnic and regional lines must be rejected.

The present situation in Malaysia runs in direct parallel with the same crises that have been developing all over Southeast Asia. The mass struggles in Thailand and Myanmar, and the renewed crisis in Indonesia all point to the same conclusion: the capitalist system needs to be toppled in order for the masses to win a better existence.

The movement in Malaysia should also actively connect with mass struggles throughout Asia, in which workers and youth are all fighting for the very same class interests.

Only a socialist programme of workers' democracy, and a rationally planned economy, can end the endless social turmoil arising from the senile decay of the capitalist system, and the callous incompetence of its bourgeois representatives.