Yesterday in Copenhagen, to celebrate International Working Women’s Day the Danish Marxists organised a public meeting to launch their new book on the women’s question, with a good turnout and many people showing an interest in the ideas of Marxism on this key question. 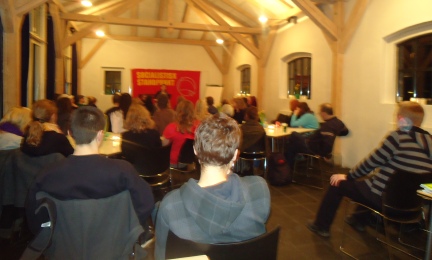 “For many years, the women’s struggle has been separated from politics. It has been reserved for women to deal with the subject, and it has been kept out of political life. We want to change that.”

With these words, the meeting which was held in central Copenhagen was opened for the 45 guests attending. The opening remarks were given by the chairman of the young metalworkers in Copenhagen. He underlined the need for opposing divisions in the workers’ movement in general, and especially on this important question.

The First of May Foundation, the nursery workers’ union LFS, as well as the plumbers’ union had given financial support to the meeting, and these organisations were publicly thanked for their help.

Then Marie Frederiksen spoke. She has contributed to the book about women’s struggle, just launched by Danish Marxists in Socialistisk Standpunkt. The book contains texts from Clara Zetkin, Rosa Luxemburg, Lenin, Trotsky, among others.

Having female ministers is no solution

“If one were to believe the mainstream media, women’s struggle is about getting more females on the corporate boards and at the top of society. But that is no solution for the vast majority of women. It is of little importance, if the person sacking you is male or female. The Danish right-wing government now has nine female ministers and ten male ministers. This does not at all make the government less right-wing. They viciously attack the welfare state,” Marie Frederiksen said. 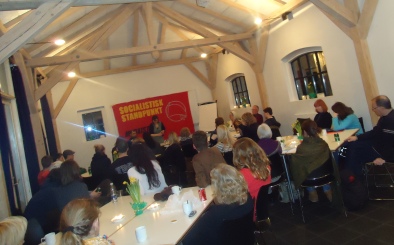 She explained that the oppression of women historically came into being at the same time as class society. With the development of agriculture, humans were able to produce a surplus. The women became confined to household work, as the production for trade became the domain of men. This is described in anthropological studies, and marvellously summed up in Friedrich Engels’ book The Origin of Family, private property and the state. Marie Frederiksen recommended this book to all the guests.

“Oppression of women has therefore not always existed. It is not something natural or a biological law, as some feminists claim. So-called ‘female nature’ has always changed – as has so-called ‘human nature’. Nothing about this is static,” Marie Frederiksen insisted.

She said that some gains has been made for women in Denmark and other countries – the right to vote and the fact that women no longer figure on the men’s income-tax return forms, as was the case in the 1970s – but still, a big inequality remains. The wage differential between men and women in Denmark is 17 percent. That is the same figure as in 1976, where the law on equal wage was introduced, and in 1973, when equal wage became a part of the collective agreements. This means that in 35 years, no improvement has been made in this field.

“Since the 1960s, women have entered the labour market on a large scale. This was linked to the economic upturn in the post-war period. New household machines meant an easing of household work. Improvements in the fields of child care and care for the elderly made it possible for more women to work. A bigger public sector also emerged where many women got jobs. It also meant that women have become an integral part of the working class and participate in the class struggle.”

The tops of the labour movement

Marie spoke about the developments in the Danish workers’ movement since the 19th century and focused on different trade union struggles such as a big strike among female porcelain workers in 1972-73 and the big strikes in the public sector in 2008, where 100,000 workers struck and posed a direct threat to the right-wing government. She also explained the extremely negative role played by the right-wing leadership in the trade unions.

She explained that workers learn through struggle. It is through struggle that the workers become conscious of their strength as a class, of their ability in various fields of life, and they also become aware of questions and problems they do not normally think about. In normal, calm times, one does not have the time to think about big questions, but through events, which forces the workers into struggle, advanced conclusions are being drawn. Anyone who has taken part in a strike knows this very well. Suddenly, questions such as privatisation, the role of the police and the position of women in society, appear.

“A strike may win certain improvements, but the basic structures of society are maintained afterwards. One is forced back into the role of a passive worker in society and on the workplace instead of an active agent, discussing, learning and acting. We are socialists because we think that all kinds of oppression cannot be separated from politics.” 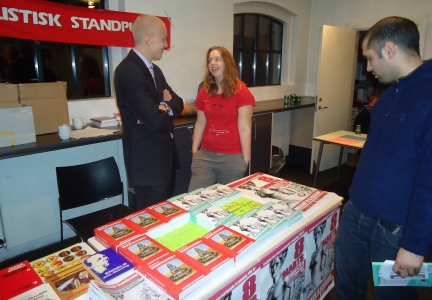 Marie Frederiksen ended her speech with the following words:

“With a planned economy, we would be able to immediately increase production and use the technology to the benefit of the majority. The working week could be shortened immediately, which would mark a decisive shift in the emancipation of women. We would be able to use the resources of society to improve the public welfare in such a way that workers, children, the elderly and sick could achieve decent conditions. Furthermore, we would be able to use the technology to remove almost all housework. Robot vacuum cleaners, dishwashing machines, public laundries, renovated houses, public window cleaning, public cleaning, public restaurants with good, healthy and cheap food for all, meals in all nurseries, schools and workplaces and so on – this would be the beginning of the emancipation of humanity. This can only be achieved through socialism.”

At the end of the meeting, many participants stayed to discuss politics and have a beer, and many bought the book about women’s struggle and signed up for more information about Marxism and the Marxist tendency.