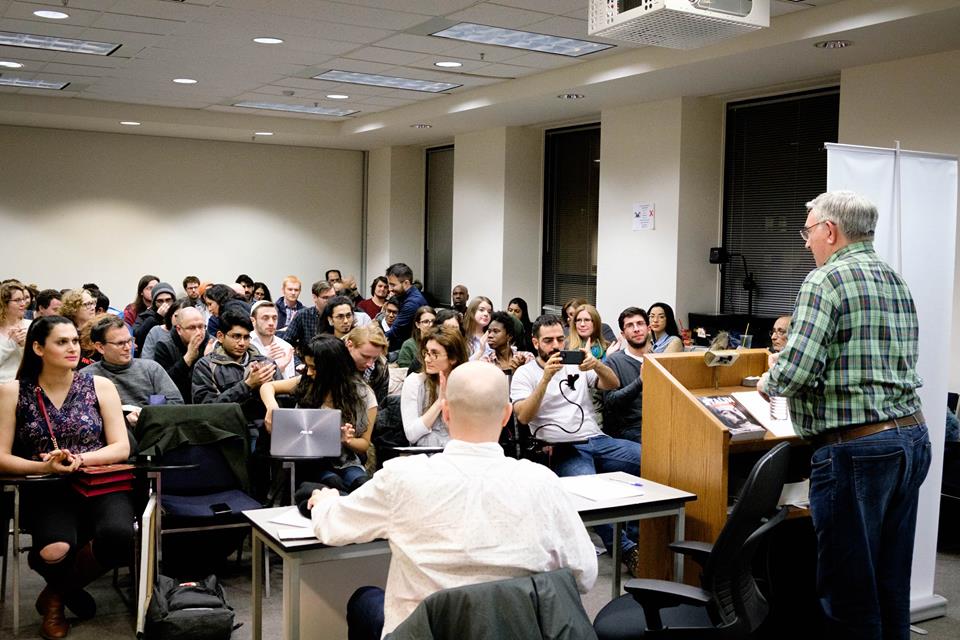 The new and completed edition of Stalin, which Leon Trotsky was working on at the time of his death, was officially launched in Canada at a meeting in Toronto this past Thursday, February 16.

The meeting was held at the University of Toronto before a packed room with some 70-80 in attendance and was hosted by Fightback, the Canadian section of the IMT.

Alan Woods, editor of the In Defence of Marxism website, spent years painstakingly translating and restoring the work, and gave a presentation on the new and completed biography. 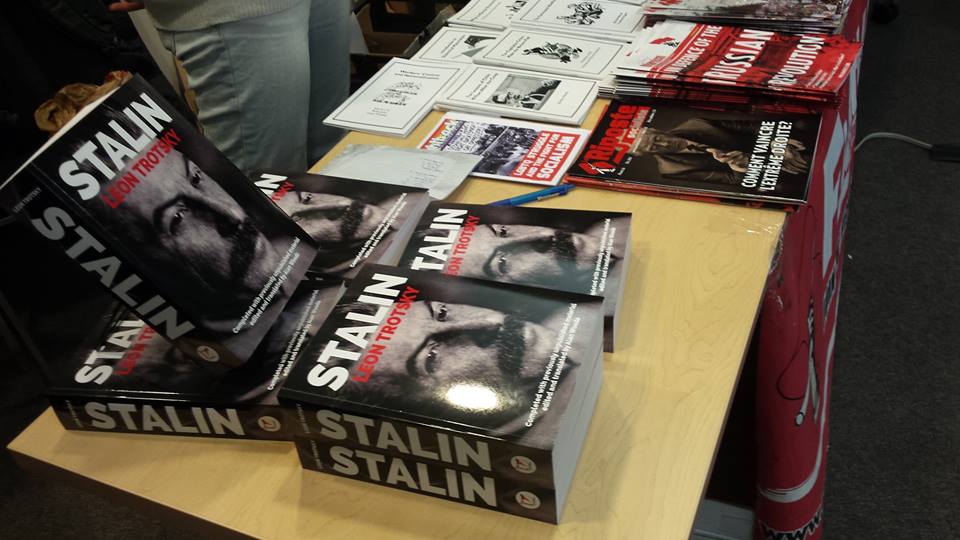 Alan began by explaining that every book has its own destiny. The Stalin book in particular had an extraordinary destiny. It was never supposed to see the light of day.

Trotsky was working on the biography when he was killed in a cowardly manner in August 1940 by a Stalinist agent. While the book itself was not the cause or the reason for the assassination, it did play a role in Trotsky’s murder. The execution had already been decided and prepared long in advance, but the biography undoubtedly hastened the execution. 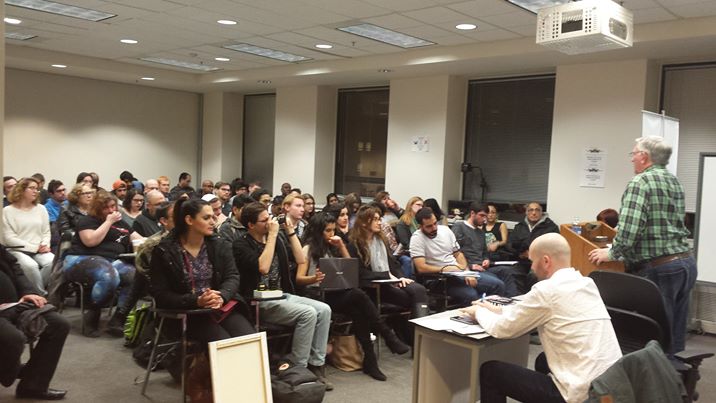 We know from the Soviet archives that Stalin was obsessed with Trotsky and had his latest works delivered to his desk every morning. When Stalin learned that Trotsky was writing a book about him, which would expose his real history and his actual role in the Russian Revolution, it only added to Stalin’s determination to kill Trotsky. 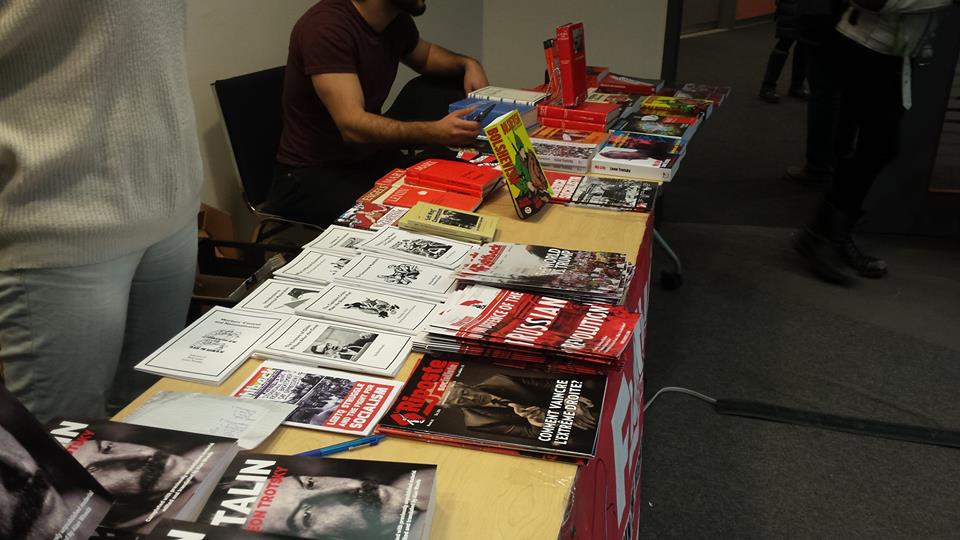 One must wonder of course how it was that Stalin, who by this time had absolute power and the entire Soviet police, army and bureaucratic apparatus at his disposal could fear Trotsky, who at this time was isolated.

Stalin was one of the greatest criminals in history, and like all criminals he was intent on eliminating and destroying all witnesses – witnesses to his true past crimes. To that end, Stalin murdered rivals, supporters and friends alike. As Trotsky was the last surviving Bolshevik from the days of October, he was the last witness to the truth. And for this Stalin killed him.

Stalin was never an outstanding leader of the Bolshevik party. He was largely unknown, even in Russia. If one compares Stalin to the other Bolshevik leaders, not just Lenin and Trotsky but men and women such as Bukharin, Zinoviev and others, they were all brilliant, cultured, intellectual revolutionaries who had lived abroad, were cultured and familiar with foreign languages.

Stalin was none of these things, spoke no foreign languages and had no connections or interest in the international labour movement.

He was a bureaucrat, an apparatchik, a committee man, with a strong and forceful personality.

In reality, Stalin was a mediocrity – a capable man and an outstanding mediocrity, but mediocre nonetheless.

If Stalin were such a mediocrity then how was it that he could have defeated Trotsky and the Left Opposition? This really comes down to the question of the role of the individual in history.

There is a widespread misconception, which in reality is a distortion of Marxism, that Marxism reduces everything to economic factors. Neither Marx nor Engels ever said any such thing. In fact, they explained the opposite, at length. Marxism understands that men and women make their own history, but that this history is made within certain limits, determined by the concrete historical circumstances.

If one takes the example of the Russian Revolution, the role of the individual in history can clearly be seen as can the changing nature of this role. If left to the Bolshevik leaders prior to the February Revolution, the October Revolution would never have happened. 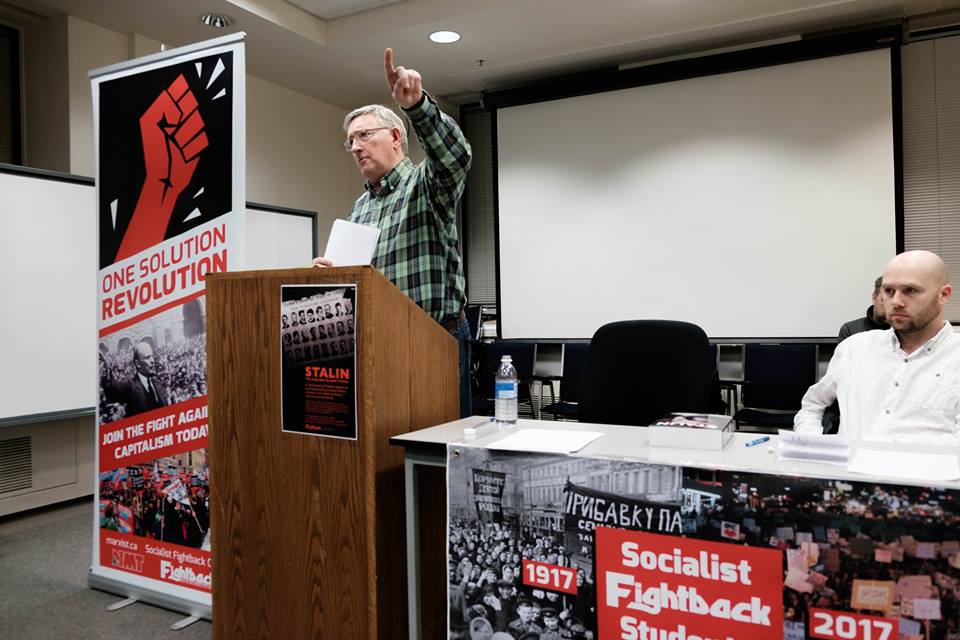 Stalin, Kamenev and the other Bolshevik leaders at the time supported the provisional government, opposed the workers taking power, and proposed a merger with the Mensheviks. They simply were not up to tasks posed by history.

The role of the individual in history is determined to a large degree by the balance of class forces. Years later, with the Soviet Union isolated following the defeat of the German Revolution, amongst others, Lenin and Trotsky were unable to change the tide of history.

Every revolution has a heroic period, a time of revolutionary ascent and unity. This period requires heroes, the giants of history. If we look at the French Revolution we see in this period the rise of figures like Marat, Danton and Robespierre. These are now hated figures according to bourgeois history, precisely because they are feared by the ruling class. The same goes for Lenin and Trotsky, two giants who played a prominent role in the heroic period of the Russian Revolution. 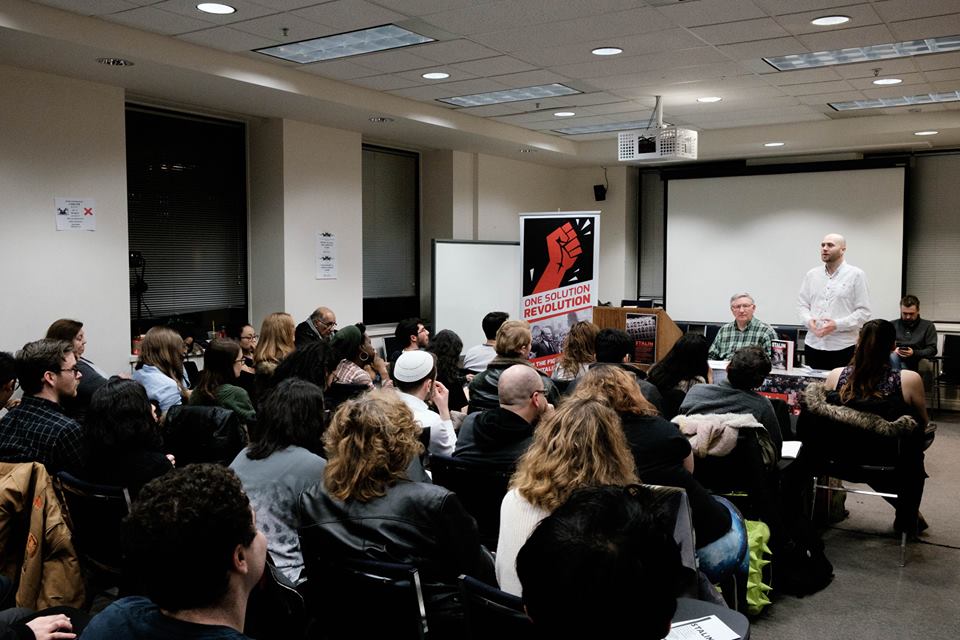 However, every revolution will also tend to pass through a phase of decline, where the masses cannot go any further. The participation of the masses declines, giving rise to mediocre figures such as Napoleon or Stalin.

We know that Stalin was abused. By all accounts he was sullen, vindictive, vengeful and sadistic. But these psychological qualities do not explain the rise of Stalin. The rise of Stalin was a reflection of powerful social forces, and cannot be explained by psychology. Not every abused boy becomes a Stalin, just as not every failed artist becomes a Hitler. The rise of figures such as these are determined by a concatenation of social forces and events.

Stalin didn’t defeat Trotsky because he was smarter or cleverer. He defeated Trotsky because at this time, after four years of war, revolution and civil war the Russian working class was exhausted, hungry and desperate. The hopes of the Bolsheviks and Russian working class were dashed in Germany. The Soviet Union was isolated and surrounded by enemies.

This meant a profound change in the correlation of forces based on the exhaustion and apathy of the masses. Trotsky tried to fight Stalin and the rising bureaucracy and was defending the genuine ideas of Bolshevism and October, but was waging a struggle on the basis of a class that was exhausted.

At this point in time, the bureaucracy did not need a hero or a giant of history such as Trotsky, who could never accommodate himself to the new correlation of forces. What they needed was a mediocrity who could preside over the period of decline of the Revolution.

Alan finished by explaining that the volume of water flowing over Niagara Falls could not possibly match the volume of lies about the Russian Revolution. The main lie peddled by the ruling class is that Stalinism and Bolshevism are the same thing, or at least that Stalinism is the natural outcome of Bolshevism.

If this were true, why in order to consolidate power did Stalin have to kill all the old Bolsheviks? The fact that Stalin had to exterminate the Bolshevik party, the old revolutionary guard, demonstrates that Stalinism and Bolshevism are entirely incompatible.

Human beings are frail and fragile and can easily be killed. But ideas are not so easily destroyed, and it is impossible to kill an idea whose time has come. In this sense, Trotsky was victorious. The ideas of Trotsky, the ideas of Leninism, Bolshevism and the October Revolution did not die in August 1940. In fact, the struggle based on these ideas continues to this very day.

The fact that “Trotskyism” continues to haunt the bourgeoisie and the reformist and Stalinist leaderships of the labour movement is evidence of the power of these ideas and show that they are more relevant now than ever before.

The crisis of global capitalism can be seen everywhere around the world. We are witnessing the collapse of the centre and polarization to the left and the right. The wheel of history is turning. Socialism and communism did not fail in the USSR. It was Stalinism that failed, a bureaucratic totalitarian system.

The bourgeoisie were euphoric when the Soviet Union collapsed. It was proclaimed as the end of history. But history is on the march again. Capitalism is being questioned everywhere, especially by the youth. There has almost never been a situation where people are so skeptical of capitalism, searching for an alternative, and open to the ideas of Marxism and socialism.

It is our duty to take up the banner, clean it from the stains of the crimes of Stalinism and raise it as the only banner the working class can support – the ideas of Marx, Engels, Lenin and Trotsky, the ideas of the Bolshevik party and the October Revolution.

You can buy a copy of Stalin from Wellred Books (Britain) or Marxist Books (US).