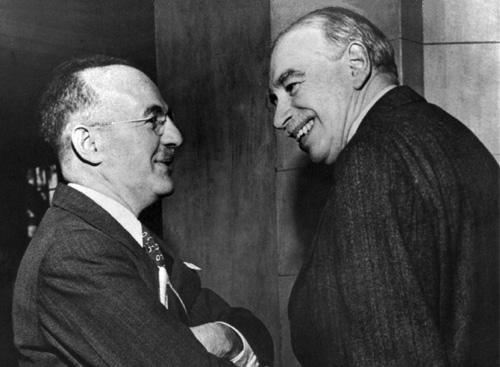 “We are all Keynesians now.” So said Richard Nixon, the Republican and former President of the USA, in 1971. Forty years later, it seems that John Maynard Keynes is back in fashion, especially amongst the leaders of the British Labour movement. The reformist leaderships of the Labour Party and the trade unions cling to the Keynesian idea that the economy can simply be “stimulated” back in growing. But as the Marxists have explained before, the current economic crisis is not just part of some boom-and-slump, but is an organic crisis of capitalism, and growth cannot simply be created at will.

The individual measures of this or that tax cut are not of great concern. What must be examined, however, is the constant talk of having “policies for growth” – a line that seems to be perpetually emanating from the mouths of the Labour Party and trade union leaders. The implication of such talk is that the Tories and other bourgeois governments are against economic growth!

Of course every economist and politician is for economic growth; life is much easier for the ruling class when the cake is getting bigger and a few more crumbs can be thrown in the direction of the masses. The problem is that growth under capitalism cannot be simply conjured up like a rabbit from a hat.

For these naive men and women in the leadership of the Labour movement, the solution to the economic crisis is simple – we must “stimulate growth”. They see the economy as like a stalled engine that simply needs a spark to get it going again. But growth under capitalism cannot be turned on and off like a tap. If growth could be created on demand, then there would never be any recessions in the first place!

Show me the money!

Keynes is most famous now for his advocacy of government intervention during the Great Depression of the 1930s, which hit a chord with leaders such as Roosevelt in the US, who implemented the “New Deal” in response to the crisis. The idea was simple: unemployment was high, and was acting as a drag on demand. The “solution” was for the government to inject a massive stimulus into the economy by initiating large-scale infrastructure and construction programmes, such as the Hoover Dam. The theory was that by reducing unemployment workers would gain wages that they could then spend in order to increase demand. The need for materials and tools in these public-works programmes also helped to fill the order books of many private companies.

The reality is, however, that the New Deal did not solve anything. The Great Depression lasted all the way up until the onset of WWII. Nevertheless, politicians and economists nowadays once again look towards the idea of a new New Deal. The only problem is, however, that governments across the world don’t have any money anymore with which to stimulate their economies. Having bailed out bank after bank, sovereign debt in the advanced capitalist countries is already too high for the nervous credit markets.

Government intervention to stimulate the economy may sound simple, but governments don’t have any money of their own to spend. At the end of the day, government spending must be financed either by taxes or by running a deficit and borrowing. But credit markets are already worried about the ability of governments to pay back their debts, hence why austerity is being forced upon populations in country after country. Meanwhile, any additional taxes must either be gained from workers or from businesses; but extra taxes on workers act like a cut into wages and thus bite into demand, defeating the original point of government stimulus (i.e. to stimulate demand), whilst higher taxes on businesses cut into profits, leading to a strike of capital and a fall in investment.

Marx explained that it is investment in production by capitalists that is the driving force behind capitalism. The competition between different individual capitalists forces each one to invest in production in the search for higher profits. By investing in new, more productive machinery and processes, a capitalist can increase the productivity of his/her workforce, and thus produce a greater mass of commodities with fewer workers. This, in turn, allows the capitalist to decrease their costs and thus lower their prices below those offered by their rivals. In this way, an individual capitalist can gain market share and obtain super-profits. These profits are, for the most part, ploughed back into production by the capitalists, thus increasing productivity even further.

Marx also explained, however, that there are inherent contradictions in this process, arising from the fact that, on the one hand, workers are only paid back in wages a fraction of the value that they produce, i.e. the wealth that they create, but that, on the other hand, these wages ultimately form the market, i.e. the effective demand, for the commodities that they are producing. This leads to what Marx called a “crisis of overproduction”, in which capitalists cannot sell their commodities and thus realise their profits. Under capitalism, where the means of production are privately owned, production is for profit; therefore, when profit cannot be realised, production will stop and millions are consigned to unemployment.

This is the situation that the world faced during the Great Depression and that the global economy faces now. It was not the New Deal or any other Keynesian measures that pulled the world out of a depression in the 1930s, but rather it was the vast destruction of capital during WWII and the expansion of the global market following the war. These factors, amongst many others, paved the way for the “Golden Age” of capitalism in the 1950s and 60s, when the economy saw its fastest ever growth. Ted Grant explained these factors behind the post-war boom in a pamphlet entitled “Will There Be a Slump?”:

“What then are the basic reasons for the developments of the post-second world war economy?

“All these factors explain the increase in production since the war. But the decisive factor has been the increased scope for capital investment, which is the main engine of capitalist development.” (Ted Grant, “Will There Be a Slump?”, 1960)

Similarly, the global economy was able to grow during the 1980s and 90s due to a combination of other factors: the expansion of the market into Russia, Eastern Europe, and China; the cheaper workforce in these countries that became available to capitalism; the squeezing of the working class in the advanced capitalist countries following the defeat of the labour movement and the breakup of the trade unions; and the use of credit to artificially expand the market.

Depth of the crisis

Nothing demonstrates the depth of the crisis today more than the complete lack of investment by the capitalists in real production. In the same article as above, The Economist highlights that capitalists are not investing, despite profit margins that “are close to a 50-year high”. The reason for this is the excess capacity, i.e. the overproduction, that already exists within the system. Why invest in real production when there are already too many commodities being produced than can be sold?

There is plenty of money in the world, but it is concentrated into relatively few hands; hands that are unwilling and unable to invest in production. As The Economist explains:

“Almost every asset class seems to be fraught with danger. Equities have suffered two bear markets in just over a decade and remain vulnerable to a rich-world recession; government bonds offer little protection against a resurgence of inflation; commodities are volatile and hostage to a possible drop in Chinese demand; property is still suffering from indigestion after the past decade’s boom.”

Instead of investing their wealth back into production, the bourgeoisie are putting their money into speculative activity. Hence we see the rising price of gold and of other precious metals, of the Swiss franc (leading to the Swiss government actively intervening to keep their currency low) and other currencies, and of commodities such as staple foods and oil. This speculation, in turn, contributes towards inflation.

In their desperation, governments have been forced towards a policy of printing money through “quantitative easing”. They are throwing money at the capitalists, pleading with them to invest in real production, create jobs, and get the economy growing again. The capitalists, however, cannot be forced to invest their wealth. Under capitalism, investment will be done on the basis of making, increasing, and realising a profit. If this cannot be done, investment in real production will grind to a halt.

The need for socialism

The senility of capitalism and the organic nature of this crisis – a crisis of overproduction – are aptly shown by this lack of investment that one sees in the economy today. In addition, one sees the objective need for socialism, i.e. the need to invest the vast amounts of wealth that exist in society for the need of people not profit.

Instead of looking towards Keynes and trying to “stimulate growth” in the economy, the leadership of the working class should look towards Marx and take control of the commanding heights of the economy. Concretely, this means nationalising the banks and the major monopolies – without one penny of compensation for the capitalists – and using these assets to invest in what society democratically agrees is needed.

Under capitalism, the productive potential for society is hemmed in by two great contradictions: the private ownership of the means of production and the nation state. Under socialism, however, the sky is the limit.