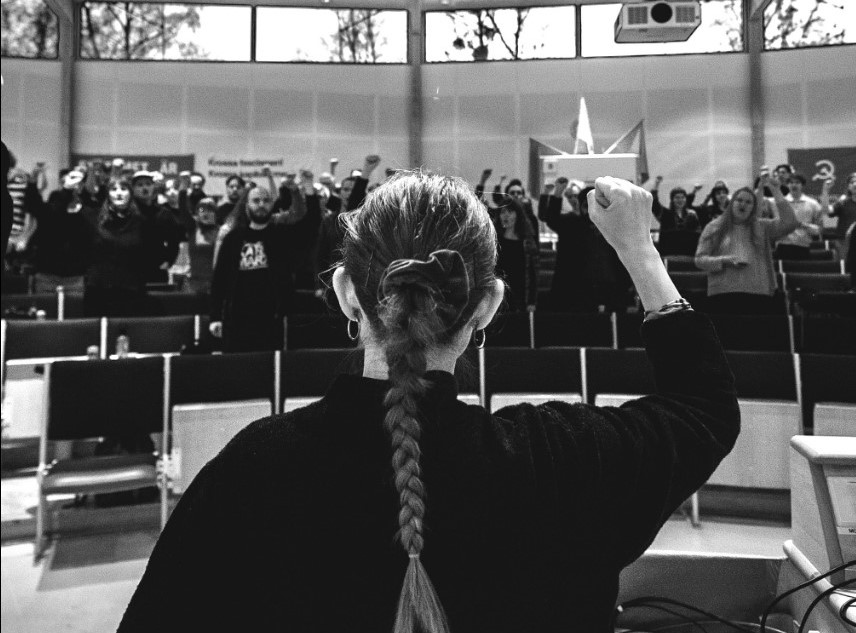 Marxism 2022, this year's revolutionary school of the IMT in Sweden, was special. As the working class is reawakening in one European country after another, the relevance of the ideas of Marxism has never been more evident. Sweden is no exception, as proven by the fact that thousands of miners in Kiruna and Malmberget – defying the union bureaucracy – have just raised a radical demand for a 20 percent wage increase.

Over the weekend, 125 participants, from Umeå in the north to Malmö in the south – and two participants from Norway and Finland respectively – gathered in Stockholm to study the revolutionary ideas of Marxism.

From the first session, World Perspectives: Crisis, War and Class Struggle, it was clear what this weekend was all about: not the academic discussions usually taking place in the university lecture hall – but theory as a guide to revolutionary action. 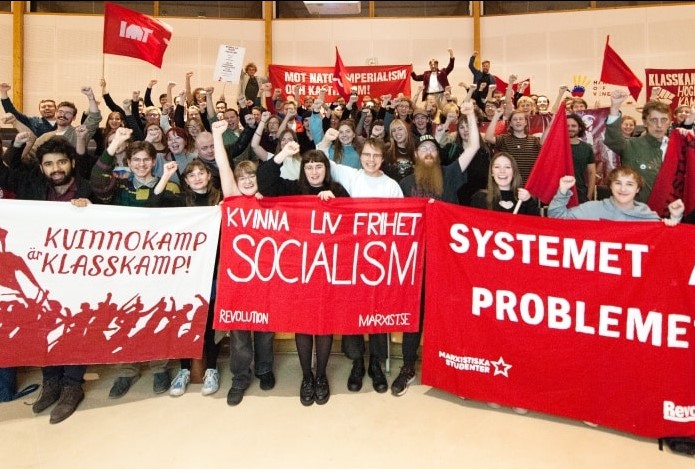 Over the weekend, 125 participants gatherred in Sweden to study the revolutionary ideas of Marxism / Image: Revolution

In the opening session, Fredrik Albin Svensson, editor of marxist.se, started off describing a world “characterised by chronic political crisis.” Since 2011, the number of protests of more than 50 people has exploded on every continent. In an international poll by Edelman, a majority agreed with the statement that “capitalism does more harm than good in its current form.” As Fredrik explained:

Economically, the working class is currently being squeezed from all sides, a process that was discussed at length during the afternoon session on Saturday, Money, Inflation and the Crisis of Capitalism. “Inflation means that a growing question for workers is – not 'can I afford to strike?' – but 'can I afford not to strike?'", explained Niki Brodin Larsson in his lead off. 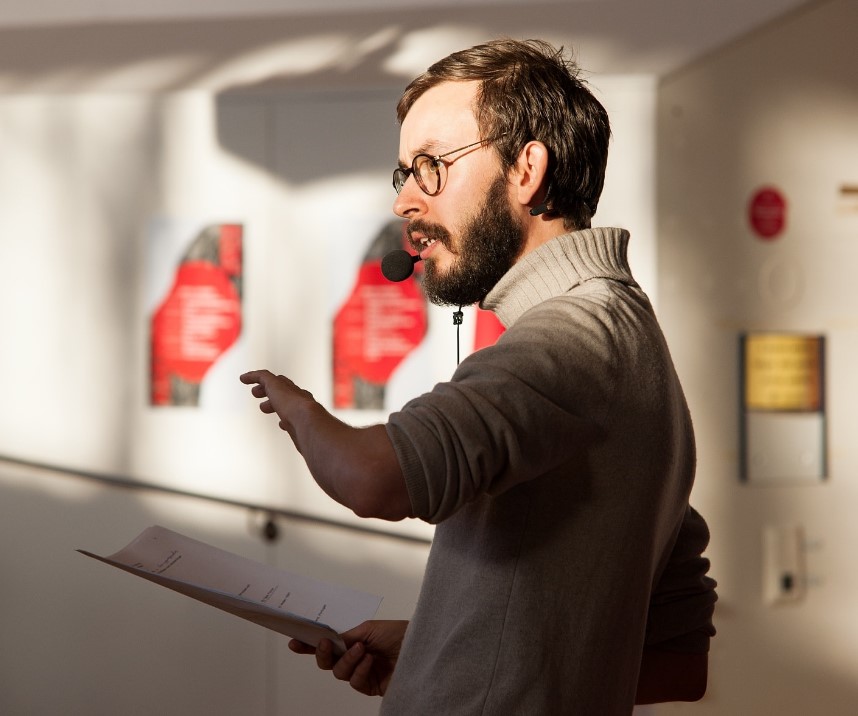 The post-war capitalist boom and the massive development of world trade have come to a definitive end. Now, we see new imperialist wars, such as the war in Ukraine, trade wars between the US and China, and sharpening contradictions everywhere. During the session on Imperialism, War and Proletarian Internationalism, introduced by Niklas Albin Svensson, it was discussed how all of this is part of the historical crisis of capitalism. 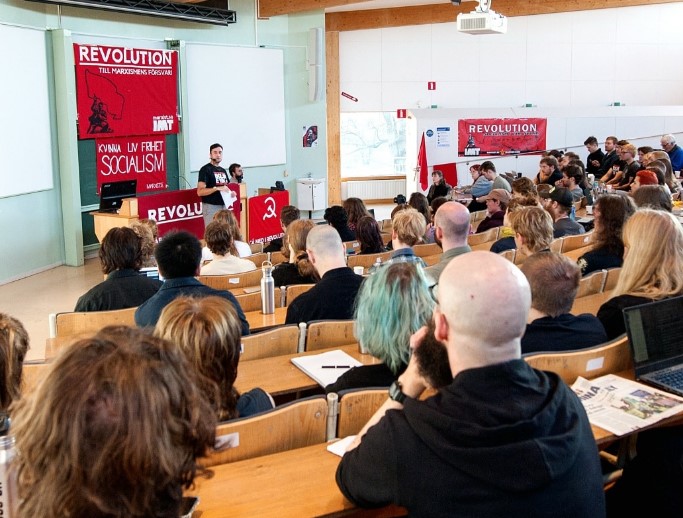 Comrades discussed how the Marxist response to the chauvinist demagogy and racism of the ruling class must be one of proletarian internationalism / Image: Revolution

The chauvinist demagogy and racism of the ruling class – as represented by the newly elected right-wing government in Sweden – is an attempt to divide the working class and undermine its potential for revolutionary change. The Marxist response must be one of proletarian internationalism. As history has shown time and time again, this is the only way forward – a fact that is conveniently lost on most reformists.

We have entered a period of deep crisis, revolution and counter-revolution. In Iran, the revolutionary process has already resulted in a mass movement against the regime, and in a fiery speech during the session Uprising in Iran: “Death to all tyrants”, Esaias Yavari echoed the words of the Haft Tappeh union:

“We are in conflict with the entire system of exploitation, oppression, crime, discrimination, poverty, and the entirety of this class system, whether it is in Iran, Israel, Palestine, Afghanistan, Iraq, Turkey, England, America, Russia, China, etc… We do not need the support of the oppressors… We are the working class, the wage labourers and by uniting ourselves at the national level and by uniting with other workers in other countries, we will uproot all of you!”

And the need for proletarian internationalism was on display throughout the weekend. The knowledge that the IMT was organising revolutionary schools in Denmark, Switzerland and Germany that same week filled the air with a sense of revolutionary optimism and fighting spirit.

Marxism – a guide to action

During sessions on Marxism vs. Anarchism: democratic centralism or ‘horizontal networks’?, Dialectical materialism: the role of philosophy in the revolutionary movement and State and revolution: from capitalism to communism, comrades took the chance to deepen their knowledge of the fundamentals of Marxism. The differences between our ideas and the ideas of anarchists and postmodernists were made explicit, showing that Marxism is the only theory that shows a way out of the dead end of capitalism. 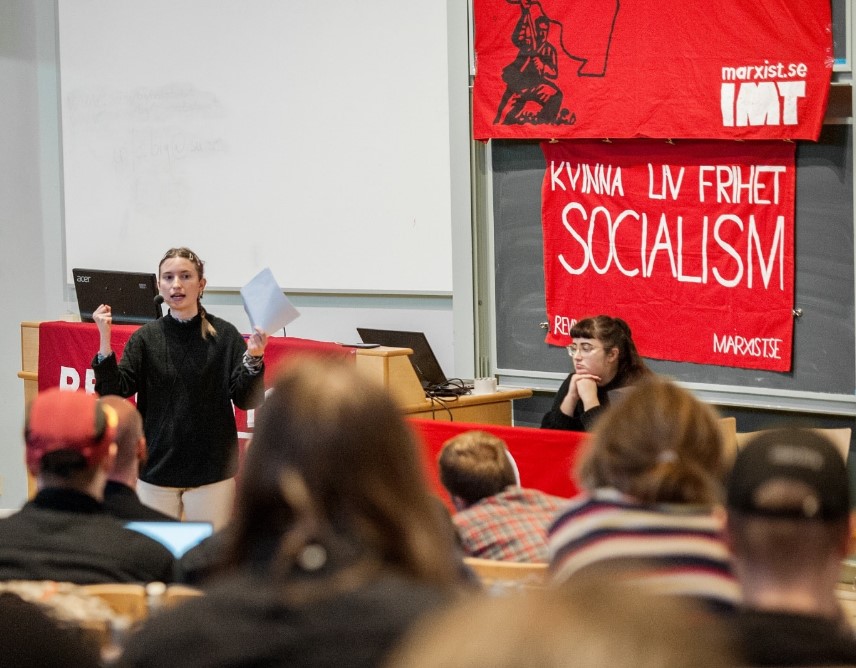 As Ylva Vinberg summarised in her closing speech, it's not a question of if but when the working class moves” / Image: Revolution

In her closing speech, which was met with resounding applause, Revolution's editor Ylva Vinberg summarised our tasks:

“In 1938 Trotsky wrote that: ‘Without a socialist revolution, in the next historical period at that, a catastrophe threatens the whole culture of mankind.' He was referring to the Second World War. Today we face what is, in some ways, a greater threat to the future of humanity: the climate crisis.”

The crisis of capitalism can only be resolved through the revolutionary struggle of the working class. Once the working class moves to change society, there is no army in the world that can stop it.

“There are of course those who are pessimistic, who believe that the Swedish working class will never move,” Ylva continued. “But it's not a question of if but when the working class moves.”

“1969 was a crucial year for Social Democratic parliamentarianism. They were going to inform the whole working class of Europe that in Sweden we have an absolutely waterproof system where the problems are solved in mutual agreement, without strikes. But the miners went on strike and dispelled the Swedish miracle.”

Now the miners are raising their voices again in Norrland, where thousands have voted for demands of between 10 and 20 percent at union meetings. The words of young miner Waldemar Tapojärvi to Dagens Nyheter show the seething anger at the union's inaction:

“It hit morale hard when it came out that our union IF Metall is only demanding 4.4 percent in wage increases next year. And that they clearly stated that we will not be compensated for inflation. That we should expect cuts in real wages… It is not a law of nature that it is workers' wages that drive inflation. People here are pissed off because our own union IF Metall is arguing as employers ... We cannot sit silently and accept such a betrayal.”

We cannot rule out that the miners will again be the force that goes on strike and “dispells the Swedish miracle” of consensus and class collaboration. What is clear is that Sweden is heading for increased turbulence – and class struggle. Revolutions are being prepared everywhere, even in Sweden as Ylva explained:

“World revolution is on the agenda: that is a fact. And that means that we, who have already concluded that capitalism must be overthrown, are faced with a task. We must study Marxism carefully. But ideas alone are not enough. We must also act. Not by throwing soup on Van Gogh paintings or gluing ourselves to the street, but by building the revolutionary organisation that the working class needs in order to take power.” 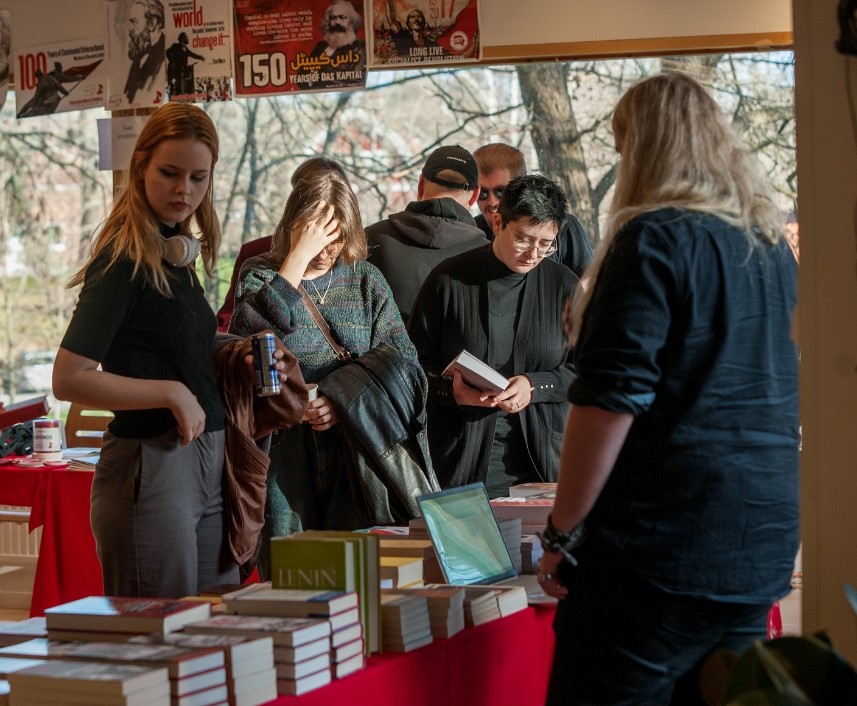 There was no shortage of enthusiasm among the participants, as was shown in the extraordinary collection where comrades collectively raised more than 37.000 Euros for the IMT / Image: Revolution