Details
Patrick Larsen in Caracas
06 May 2008

Share
Tweet
At the April 30 preparatory meeting for May Day 4000 workers filled the Teatro Taressa Carreño in Caracas to hear Chavez give his most radical speech ever. He signed two decrees in front of the audience: the first one being a law that increases the minimum wage by 30% and the second the official nationalization of SIDOR. This was followed on May Day with hundreds of thousands of workers filling the streets of Caracas. 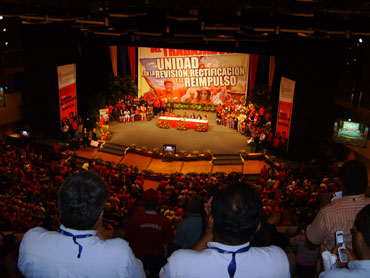 May Day 2008 in Venezuela was held in the context of a revolutionary process that after ten years of ongoing struggles now finds itself at the crossroads.

Especially the re-nationalization of SIDOR, which came after a long struggle on the part of the 15,000-strong workforce against the Argentinean multinational Techint, had a big effect. Together with the other two nationalizations, it served to put the question of the working class as a vanguard force back on the agenda.

On April 30, a big meeting was held to celebrate the struggles of the working class and prepare for May Day in the Teatro Taressa Carreño in Caracas. The mood was euphoric as the hall was slowly but surely filled to maximum capacity with 4,000 workers from all across the country. Hundreds of workers from SIDOR had travelled more than ten hours just to attend this event. 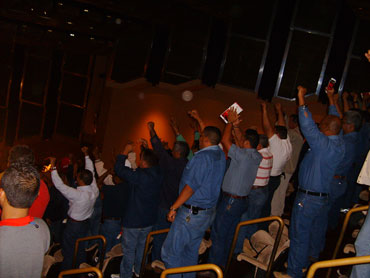 Chávez gave a two-hour speech which was one of the most radical speeches he has ever delivered. He started by congratulating all tendencies in the Venezuelan trade union movement and applauded especially the participation of the SIDOR workers and their trade union. Then he went on to condemn splitters and divisions and insisted on the unity of the working class:

"There are sometimes trade-unionists who fall into personalisms [personalismo] and put that above the interests of the workers. This is unacceptable."

He added, that May Day has its origins in the struggles of the Chicago Martyrs in the US and that "these fighters were an example of how trade unionists should act - if necessary giving their lives for the cause of the working class" [raoturous applause]. In his opinion, the former trade unionists who signed the Punto Fijo social pact during the Fourth Republic had "betrayed the working class". 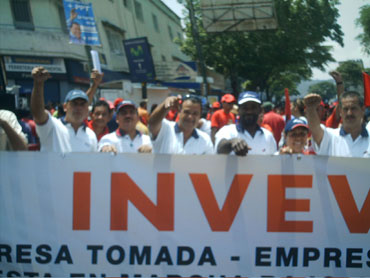 He went on to say that, "the working class showed a high level of consciousnes in the years 2001-2003 when it defeated the bosses' lockout and sabotage". In his speech he also quoted Rosa Luxemburg and Che Guevara, and made references to Lenin, Gramsci and the heroic role played by the Russian workers and peasents in the Red Army in its war against Hitler during the Second World War.

He ended his speech by signing two decrees in front of the audience: the first one being a law that increases the minimum wage by 30% and the second being the official nationalization of SIDOR. At that point the workers began to cheer, "Asì, asì, asì que se gobierna" ("That is how one should govern!") This was a good foretaste for the activities of the next day, where workers throughout the country celebrated May Day in meetings and demonstrations.

In Caracas hundreds of thousands of workers and youth marched in a demonstration from La Bandera to the Avenida Urdanetta. A special contingent of the demo was made up of workers from FRETECO (the revolutionary front of occupied factories) who are fighting for the nationalization of the occupied INAF factory and to extend workers' control to other factories.

A special feature on this year's demonstration was Bolivian flags and banners in defence of the Bolivian revolution and the Evo Morales government against the so-called "independence" referendum prepared by the Bolivian oligarchy. This is a theme that is being discussed widely in Venezuela and on national TV programmes. Venezuelan workers and youth are following the events in Bolivia closely and solidarity activities were being prepared in front of the Bolivian embassy over the weekend. 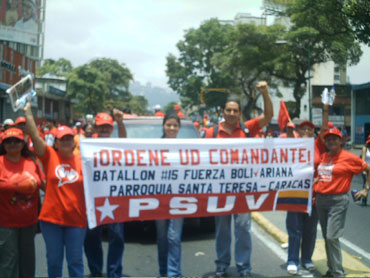 The comrades of the CMR (Revolutionary Marxist Current) were present at both the meeting on april 30 and in the Caracas May Day demonstration selling Marxist books and hundreds of copies of the new edition of El Militante, which has now been expanded to 24 pages.  Apart from that, we had comrades intervening in meetings and demonstrations in other cities throughout Venezuela, such as in Maturín, Mérida, San Cristobal (Táchira), Ciudad Bolívar and Puerto la Crúz.

This year's impressive May Day activities, the constant appeals by Chávez for the working class to put itself at the vanguard of the revolution, and the recent nationalizations should be taken as an invitation to the leaders of the UNT to put aside divisions on secondary issues and adopt a concrete programme of revolutionary action. As was pointed out in a joint leaflet of the CMR and FRETECO, the victory of the SIDOR workers should be used as an example and the UNT should call for a national conference to discuss a plan of factory occupations and concentrate on developing workers' control as an example of how to build Socialism.

Such an offensive, on the part of the workers' movement could be the prelude for a new wave of nationalizations and if the banks, the food-distribution chains and the remaining main industries are expropriated, this would in effect mean the liquidation of Capitalism in Venezuela.