Alan Woods recently spoke to a group of trade union activists in the Education sector in Mexico on "The Crisis of Capitalism and the Tasks of the Workers" in the SUTIEMS premises. 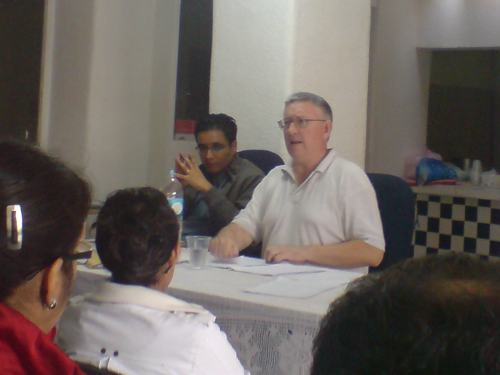 On Friday 30 October as part of the political training courses of the Union of Workers of Upper Secondary Education Institute of the Federal District (SUTIEMS) a lecture entitled "The Crisis of Capitalism and the Tasks of the Workers" was held in the SUTIEMS’ premises. About 25 union representatives from schools and Executive Committee members listened to Alan Woods explaining that the current crisis of capitalism is a classical crisis of overproduction.

This is the deepest crisis since 1929 in which all the mythology about the "End of History" and end to periodic crises has collapsed like a house of cards, showing that the central theses of revolutionary Marxism are more relevant than ever. The phenomenon of globalization, the concentration of capital... all these phenomena were foreseen by Marx over 150 years ago in the Communist Manifesto.

The crisis of world capitalism is forcing the ruling class to carry out attacks that threaten to bring the standard of living to pre-Bismarckian levels, i.e. to those of the nineteenth century. The margins for reformism are reduced to zero, so that we now have all the necessary ingredients for a fierce class struggle in which the proletariat has no other way than to organise and mobilise, which in the case of Mexico, means the preparation of the general strike. 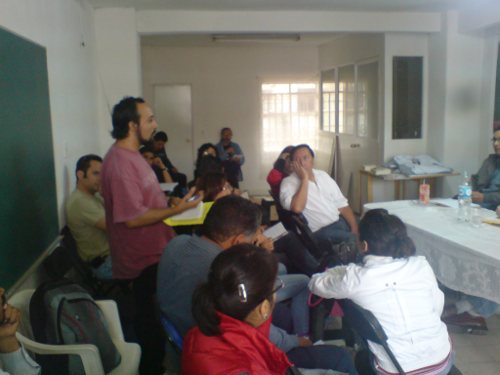 A debate opened up after the lead-off. The comrades of SUTIEMS asked about the prospects for Cuba, the Bolivarian revolution, about the guerrilla and the armed movement, about the workers' struggle in Britain... Especially controversial was the position of the Militante and the IMT on the mass organizations. The anti-working class role of the PRD and AMLO were pointed to. Alan Woods said in his reply that, although we agree on the role of the leadership of the mass organizations in holding back the working class, the role of revolutionaries is to win the masses; it is they who make the revolutions. He referred to the Bolshevik experience and the experience of the Bolivarian revolution. It is not a question of building a mass party of "three men and a dog", he said, but of patiently winning the masses to the ideas of Marxism in their traditional organizations. In general, the debate was very rich and polemic. Everyone in the meeting room agreed that the debate remains open and that fraternal and comradely discussion is an essential element for a lively and democratic trade unionism.