Share
Tweet
In February the 13th National Congress of Militante-Mexico took place, with 150 comrades taking part. After a period of intense activity over the past two years, the mood at the congress was one of enormous confidence and enthusiasm, which is reflected in the report we provide here.

Last February 22-24 the XIII National Congress of the Marxist Tendency Militante, the Mexican section of the International Marxist Tendency (IMT), took place in the Alianza Tranviarios auditorium. The context could not have been any better, as the event took place in the middle of a revolutionary situation in Latin America, a period of confrontation between the classes and the obvious rise of the labour movement in Mexico. What's more, the congress took place at the offices of a militant trade union that has a long tradition of struggle, extending back to a century or so ago. 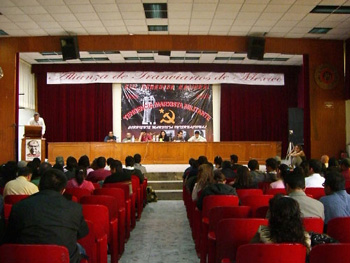 The congress began after the greetings were read out by comrade Gustavo Ortega, Political Secretary of the Alliance of Train Drivers. In his speech comrade Gustavo Ortega highlighted the importance of the congress, as it was taking place on the 160th Anniversary of the Communist Manifesto. The comrade explained that there could be no doubts about the validity of this work by Marx and Engels.

Delegates were in total agreement with the representative from the Alliance of Train Drivers and this great opening of the congress. There was a tremendous applause, and a very good fighting spirit for the start of the congress.

The first day was dedicated to a deep discussion on the perspectives for the class struggle on an international level. Juan Ignacio Ramos, IMT delegate and representative of the Frederick Engels Foundation in Spain, introduced the debate. During this session, delegates discussed very important aspects related to the political crisis in Pakistan, the strike movement in Europe, the class struggle in Asia, the Middle East and the revolutionary process in Latin America, paying special attention to the Bolivarian Revolution in Venezuela as well as the Cuban Revolution, which has entered a critical period with the resignation of Castro as head of the government.

The perspectives for the world economy were also analysed, explaining the weight of US imperialism and its tendency towards recession, threatening to throw the world economy as a whole into an extremely complicated situation - creating an atmosphere of greater tensions and diplomatic instability, forcing the bourgeois to take even more severe measures against the working class. 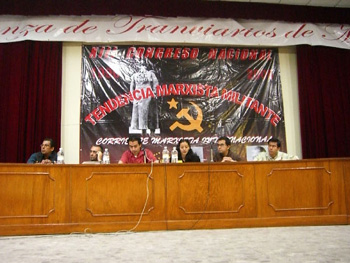 But despite this devastating perspective for the world economy, on the other hand the working class, far from passively accepting this, continues to show that it will not tolerate the capitalist onslaught without a fight. This type of response can quite clearly be seen in entire regions of the world such as in Latin America, but also in different countries in Asia. The case of Pakistan is a good example. Even in Europe we have seen mobilizations over the last few years and very important strikes in countries such as Greece, Italy, France and Spain.

The attacks that capitalism is launching are taking place at the same time that the workers are increasing their level of militancy. This leads us believe that the conditions are being prepared for further confrontations between the classes on a scale not seen in decades.

On the second day of the congress we dealt with the revolutionary process that is taking place in Mexico, from the insurrection in Oaxaca and the struggle against the electoral fraud in 2006. We also discussed the perspectives for the class struggle in our country, as well as debated the tactics that Marxists should use when intervening in the trade unions.

During the congress we confirmed our position that since 2006, Mexico has been drawn into the orbit of revolutionary Latin America, and that this situation has continued due to the bankruptcy of Mexican capitalism, which is incapable of even beginning to solve the problems the working class faces, let alone face up to its fighting spirit.

It was further explained that given the economic conditions of the country, Calderón represents a weakened and divided regime, and has no choice but to launch more attacks, such as for example the privatization of PEMEX and the counter-reform of the Federal Labour Law. These are already being prepared, and must be met by struggle on the part of the working class. All of this is preparing the ground for a new clash between the classes, and will result in conflicts as great, or greater, than those of 2006. A confrontation between the classes is unavoidable and this will open huge possibilities for the Mexican Marxists. 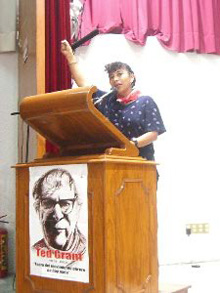 On the basis of the perspectives of national and international class struggle, we moved into the third day of our congress, which was dedicated to making a balance sheet of the participation of our tendency in the class struggle. We also discussed the measures that need to be taken in order to strengthen our internal structures, which will give us better guarantees when intervening in the coming convulsive events in Mexico. Theoretical education and the drawing up of perspectives must go hand in hand with an increase in the organizational and financial level of the organization (which depends only on the strength of our own class and nobody else). This is what the Marxist tendency Militante has been doing over the last 18 years. This is why we have full confidence in the socialist future of humankind!

The most relevant conclusion of this balance sheet was to recognise that Militante has easily passed the hard tests that the class struggle has posed in the last period, such as our participation in the revolutionary insurrection in Oaxaca and in the fight against the electoral fraud. During the recent events of 2006, our methods and orientation to the mass organisations of the working class, the trade unions and the PRD, were unquestionably confirmed. For example, thanks to this orientation we have spread the ideas of Marxism amongst hundreds of thousands of youth and workers - who threw themselves into the struggle for the defence of their vote and against the electoral fraud that brought Calderón to power. This fight, which was the most important mass movement of the last decades, was expressed through the PRD, providing the Marxists of Militante with the opportunity to sell 21,000 copies of our paper in just a few weeks. This was thanks to our orientation towards the traditional organizations as well as the organizational ability of the Tendency to respond to the movement of the workers and their search for ideas, and publish Militante on a weekly basis, instead of monthly.

Another test that Militante had to pass were the continuous attacks against us from the state, which led to the imprisonment of a layer of comrades in 2007. These were young comrades who stood shoulder to shoulder with the youth organised in the Movimientos de Estudiantes No Aceptados (MENA - Movement of Non-accepted Student) and were fighting for a place at the IPN and the UNAM. Fortunately, a correct and immediate response from our Tendency and the IMT, together with great displays of support and solidarity from the working class were a success and our political prisoners at the Reclusiorio Norte were freed within 9 days and comrade Francisco Jay, imprisoned in the Consejo Tutelar de Menores, was freed after a little more than 20 days. Without doubt the International Marxist Tendency is already playing an important role in the events of several countries, especially the Mexican Marxists. This is why the bourgeois state has been attacking Militante over the last few months.

From our point of view, to overcome and advance beyond the tests we faced proves the viability of Militante as an alternative for the workers' movement. This is one of the most important conclusions of our Congress, through which we will define the measures to continue pushing forward the ideas of Marxism.

The many visitors who attended the congress must also be highlighted. There were comrades from the Frente de Pueblos en Defensa de la Tierra (Peoples' Front in Defence of the Land), Bloque Democrático de Trabajadores del IPN (IPN Workers' Democratic Bloc) and other organizations in defence of the ISSSTE, amongst others. These comrades intervened to greet the Congress and outline their own struggles. 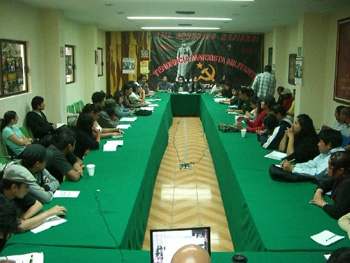 Approximately 150 comrades attended the congress, amongst them comrades from Situam (the trade union that currently is leading a bitter strike for the defence of their rights), the Mexican Union of Electricians, The United Union of Federal District Government Workers, from the National Coordination of Education Workers, the youth trade unions of the preparatory schools in the Federal District, the Union of the Communications and Transport Administration, the telephone workers' union and the Grupo Modelo union.

The participation of students was also very important, with comrades from UNAM (University village, FES Aragón, FES Acatlán, National Preparatory School Nos. 3 and 5, Sciences and Humanities College), from the IPN (Iztapalapa, Azcapotzalco, and Xochimilco), and from the Bachilleres College and the Autonomous University of Puebla.

The combination of youth and trade unionists set the tone for a militant and fighting revolutionary mood at the Congress.

It was excellent and created a very emotional atmosphere. More than one comrade was almost in tears. Some remembered this period, others were sorry about not having met our organization earlier and many others were speechless.

Without doubt, this video allowed us to look back, and then look at the present as well as the future, with the idea that we were, we are and we will be the only real alternative for the workers. We will be there when the revolution takes place and the proletariat and the exploited are brought to power. 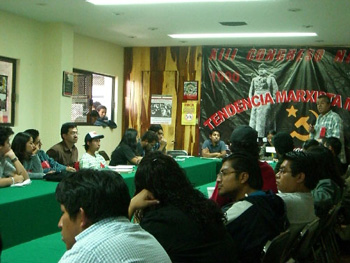 This video screening, which documented the 18-year history of Militante, created an explosive mood that made the closing session of the Congress especially combative and enthusiastic. This was clearly reflected in the way the comrades sang the Internationale at the end of the congress. The revolutionary morale in our ranks is immense, inspired by the eruption of the class struggle across the globe. We are ready to carry on fighting, as we have done over the last 18 years, shoulder to shoulder with the working class and youth.

The events of the recent period and this Congress confirm the revolutionary will of Militante and have created a solid base for our organization. Now 18 years old, we continue to push forward the ideas of Marx, Engels, Lenin and Trotsky within the labour movement and continue working towards the building of a party capable of transforming itself into an alternative for the masses in the struggle for socialism.

There is no doubt that the XIII National Congress of the Marxist Tendency Militante will go down to history as one of our best congresses, as a real and truly Bolshevik congress - in a totally democratic atmosphere, imbued with militancy, commitment, quality and with a truly revolutionary spirit. In short - we had a marvellous Congress.

Our tendency and our international are now the most important lever in history. Outside of this lever, individually, we are nothing. With this lever in our hands, we are everything.

Comrades, youth, workers, join Militante and fight for the building of a revolutionary alternative!

Read this report in Spanish.