Details
In Defence of Marxism
31 August 2022 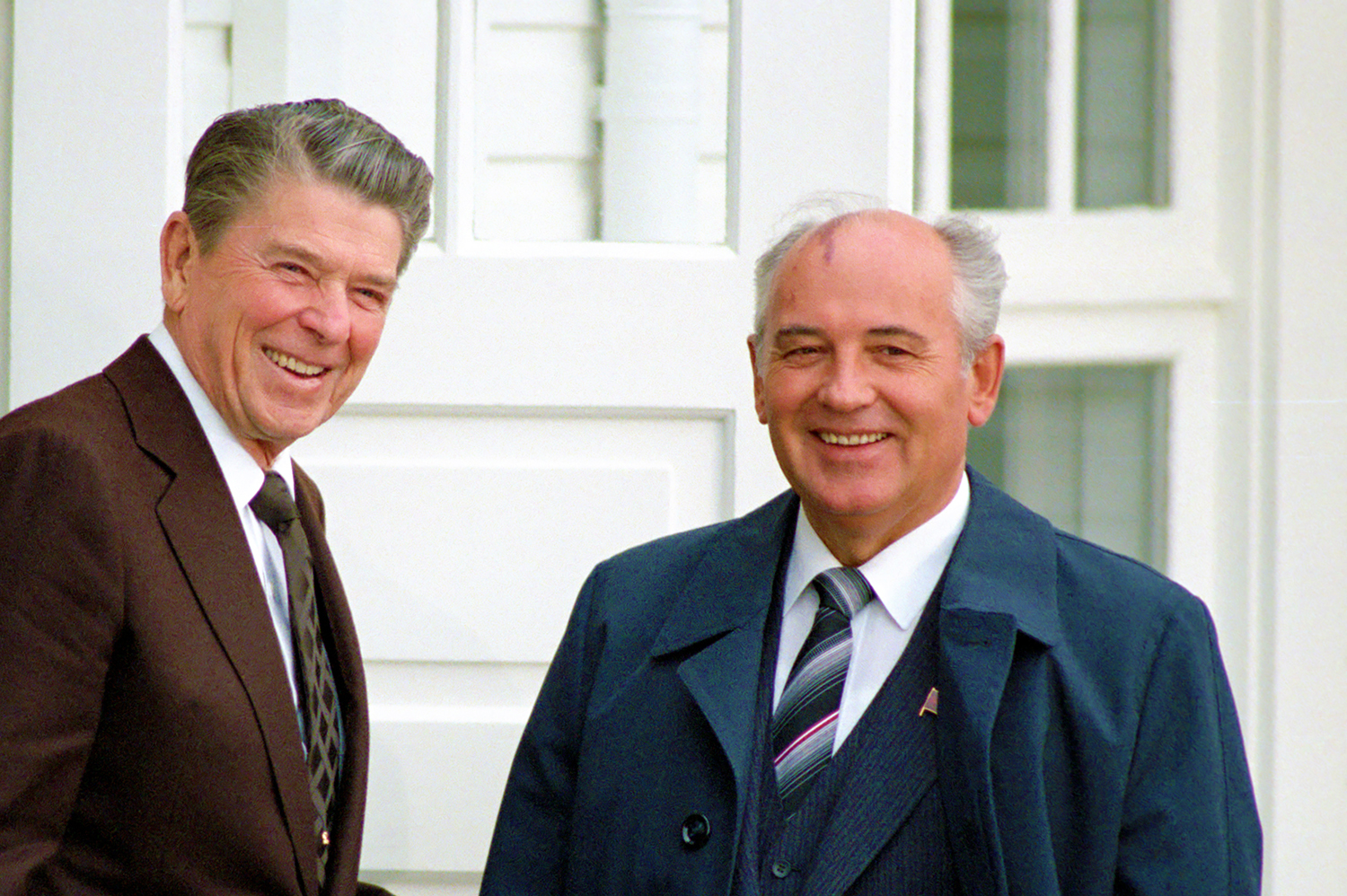 Mikhail Sergeyevich Gorbachev, the final leader of the Soviet Union, died yesterday at the age of 91. His policies of reforming the USSR ‘from above’, under the banner of glasnost and perestroika, represented an abortive attempt to maintain the privileges of the Stalinist bureaucracy, while also breaking through some of the worst logjams in the Soviet economy. The inevitable failure of these measures opened up the door for the restoration of capitalism in Russia, the destruction of the planned economy, and the impoverishment of millions. This disaster is Gorbachev’s legacy.

This article explains the events surrounding the fall of the USSR, and Gorbachev’s role in this historic calamity for the Russian and world working class. The author, Niklas Albin Svensson, also discussed the subject at the British Marxists’ 2021 Revolution Festival in London. Watch his speech below:

Gorbachev was elected as secretary of the Communist Party of the Soviet Union in 1985 after the untimely deaths of previously chosen successors to Leonid Brezhnev, who had died in 1982. Gorbachev stood at the top of a sclerotic system. Economic planning had proved its tremendous superiority over capitalist anarchy in the enormous economic growth of the Soviet Union, without precedent in human history. But by the Brezhnev era, stagnation had set in. The cancerous growth of a multi-million-strong privileged bureaucracy had become a massive fetter on the whole economy, choking its pores.

At the 27th Congress of the Communist Party in 1987, Gorbachev announced a series of reforms, which opened up the period known as perestroika (‘reconstruction’). Their aim was to save the Stalinist system from itself. As Ted Grant explained in his excellent book, Russia: From Revolution to Counter-Revolution (featuring a whole chapter on the failed policies of Gorbachev and how they laid the basis for the final demise of the USSR, and available here from Wellred Books):

“Speeches by Kremlin leaders attacking corruption, waste and inefficiency were nothing new, but Gorbachev’s reforms went much further than anything put forward in the previous 30 years. He called for a loosening of the bureaucratic stranglehold in the economy and in Russian society generally. Gorbachev advocated greater ‘democracy’, the election under certain conditions of factory managers, elections within the Communist Party and other such reforms. These attempts to reform the Stalinist system were seen as necessary to loosen up the economy and provide an impetus to economic growth. This process took place under the banner of glasnost [openness], and perestroika.

“These proposals were nothing to do with genuine workers’ democracy, which is incompatible with the bureaucratic system, but were simply aimed at removing the worst log jams in the stagnant Soviet economy. The crisis of the Soviet economy, the split in the bureaucracy that these measures of ‘reform’ represented, were symptomatic of the turbulent period that was unfolding in the Soviet Union. In his campaign to reform the system, Gorbachev partially lifted the lid off a seething cauldron of corruption, crime and discontent throughout all the Republics of the Soviet Union. Gorbachev realised that the situation could not continue without the danger of a social explosion. Enormous discontent had accumulated within Soviet society. Thousands of examples of corruption had been given in the Soviet press. …

“In his desperation to find a way out of the impasse, Gorbachev tried to inject some spark of life into the economy by appealing to the workers and making an example of the most malignant cases of bureaucratic control. Nevertheless, Gorbachev did not represent the interests of the workers. His reforms were intended to wage war on the ‘illegal’ privileges and perks of the officials, while steadily increasing the ‘legal’ ones. Already under his rule, income differentials steadily increased – the exact opposite of Lenin’s conception.

“In fact, Gorbachev’s proposals had nothing in common with the democracy of Lenin nor of genuine socialism. The bureaucracy feared the working class. The legal and illegal perks, bribery and theft had to be curtailed. Nevertheless, in doing so, Gorbachev did not want to interfere fundamentally with the privileges of the bureaucratic caste. The ‘legitimate’ privileges had to be maintained, if not increased.” (Russia: From Revolution to Counter-Revolution)

These reforms had a partial effect for a period, but they could not fundamentally resolve the crisis that existed in the Soviet Union. This is because the bureaucracy was the cause of the crisis. And as Ted Grant put it, “The bureaucracy will do anything for the working class except get off their backs.” Gorbachev’s aim was not to remove the bureaucracy, but to reinforce its rule ever-more securely by taming its worst excesses.

When reform failed, some sought to more openly ape the capitalist West. Gorbachev, with the sentimental mentality of a petty bourgeois, completely failed to understand the first thing about where events were heading. As Ted Grant explained:

“Faced with the blind alley of the regime, a growing section of the bureaucracy looked for a way out to the West, which was still passing through a temporary and artificial boom. The representatives of the bureaucratic elite had occasion to rub shoulders with millionaires, diplomats and presidents on their ever more frequent visits to the West. They contrasted this glittering spectacle with the picture of impasse and stagnation they had left behind, and the comparison did not appear very flattering. In this way, gradually the idea of the West as a model began to take firm root in a section of the bureaucracy.

“This showed the complete ideological bankruptcy of the leaders of the Soviet Union and the CPSU. Shallow impressionists like Gorbachev and Shevardnadze were taken in. Like all bureaucrats, they had picked up bits and pieces of the garbled nonsense which passed for Marxism-Leninism in the USSR in their student days. But real Marxism was for them a closed book. Their complete lack of a class standpoint was shown by Gorbachev’s typically philistine remarks that the capitalists were ‘also human beings’. In other words, one could converse with the Western leaders ‘man to man’ and iron out one’s differences round the fireplace, as if it was all a question of ‘personal chemistry’ and not the irreconcilable differences between two incompatible social systems!” (Russia: From Revolution to Counter-Revolution)

In the end, of course, the contradictions unleashed by perestroika and glasnost could lead only to one of two outcomes: either political revolution, in which the working class would throw off the suffocating bureaucracy and regenerate genuine workers’ democracy in the Soviet Union, or collapse back towards capitalism. Without a revolutionary, Bolshevik-Leninist leadership of the working class, the latter course was the one that the Soviet Union proceeded down. The consequences for the masses were abysmal. From 1990 to 1995, production fell by around 60 percent. Wages fell by 43 percent between 1991 and 1993. Conditions for the most vulnerable deteriorated fastest. Whereas women had once received wages averaging 70 percent of men’s wages, by 1997 the average had fallen to just 40 percent. Meanwhile, death rates soared by 30 percent after 1989.

As for Gorbachev, he subsequently cut a rather contemptible figure. He was praised to the heavens by the Western imperialists, as they are doing today in the obituaries of the main daily newspapers. But he was soon cast aside by the rising Russian bourgeoisie, and is best known since for a Pizza Hut commercial, and a few sentimental comments lamenting the consequences of the USSR’s collapse:

“While publicly lionising Gorbachev, Reagan and the other Western leaders must have had a good laugh behind his back. The cold, calculating American politicians and diplomats must have rubbed their eyes in disbelief! This accidental petty bourgeois element was rapidly drawn into the logic of capitulation by these nice human beings, who were intent on throttling the Soviet Union, and bringing it to its knees. …

“In all probability, Gorbachev did not want the restoration of capitalism in Russia, yet he prepared the ground for it and was duly thrown to one side by the faction of the nascent bourgeoisie, led by his protégé Yeltsin, once he got into the saddle. Nevertheless, he is quite prepared to accept the fait accompli of the so-called reform, while impotently whimpering about its ghastly consequences. In this respect, also he is a faithful copy of the Social-Democratic leaders in the West, who are ready to embrace capitalism, but do not like the things which inevitably flow from it.” (Russia: From Revolution to Counter-Revolution)

Irrespective of his intentions, Gorbachev’s actions facilitated the destruction of the final vestiges of the Russian Revolution, which were carved up and consumed by a cabal of thieves and gangsters, who rule Russia to this day. Let Gorbachev’s legacy be buried, along with his mortal remains.