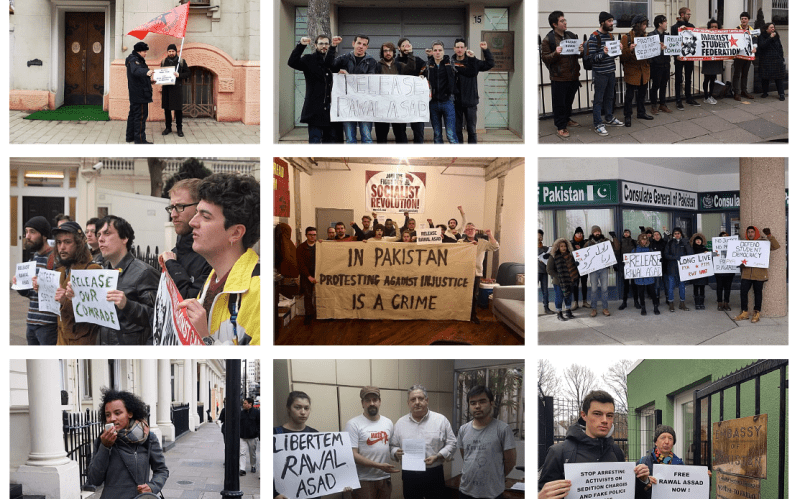 The solidarity campaign for Rawal Asad (who has been held in custody since February on the scandalous charge of sedition after attending a peaceful protest in Multan, Pakistan) shows no sign of slowing down. On 4 March, comrades and supporters of the International Marxist Tendency coordinated a day of pressure against the Pakistani state by picketing, protesting and telephoning Pakistan's embassies all over the world, so the regime knows the world is watching, and we will not stop until our comrade is released.

At present, Rawal is still being denied bail. The Multan courts have given the date of his next hearing, which will take place tomorrow (6 March). Rawal's lawyer has also appealed against the fake case of sedition registered by the Multan police, which will have its first hearing today (5 March).

Protests last week and over the weekend

Prior to the day of action, there were other protests and messages of support for Rawal, in Pakistan and beyond. For instance, last Thursday (28 Feb), there was a protest held by the Progressive Youth Alliance in front of National Press Club, Islamabad:

We also received a message of solidarity from the Progressive Writers' Association, who on Saturday 2 March organised a meeting in the Pak Tea House, Lahore to demand our comrade's release. Renowned intellectuals and artists, like film director Syed Noor and Shoukat Chouhdary, in addition to General Secretary of PWA, Javed Aftab, participated in the event:

The comrades from Denmark organised a protest at their embassy in Copenhagen last Friday (1 March). We also received many photographs and messages of international support over the weekend (posted at the end of this article):

Solidarity from student and labour movement

On Sunday 3 March, a number of trade unions from El Salvador sent a collective message of support for Rawal, demanding his release: 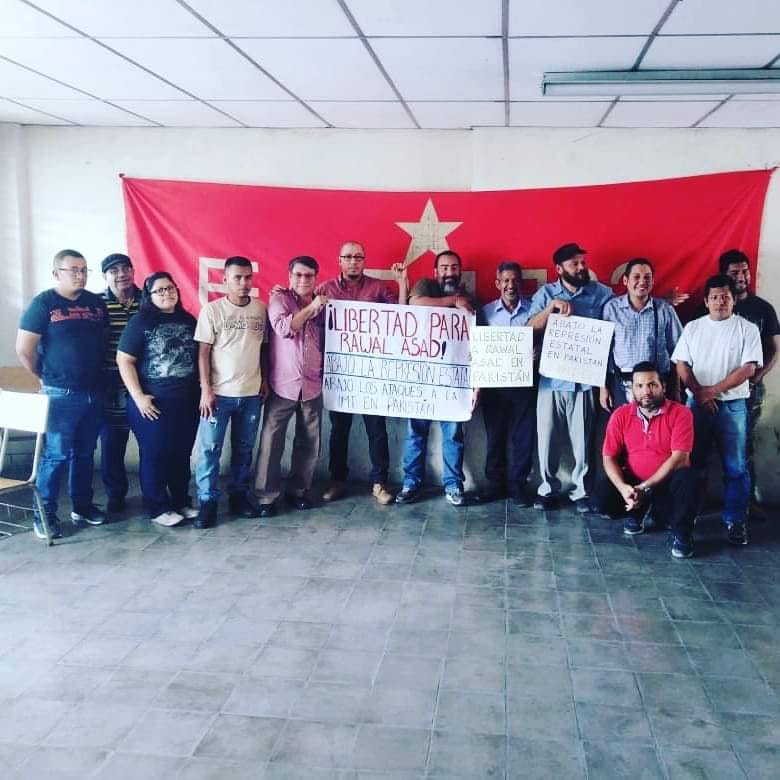 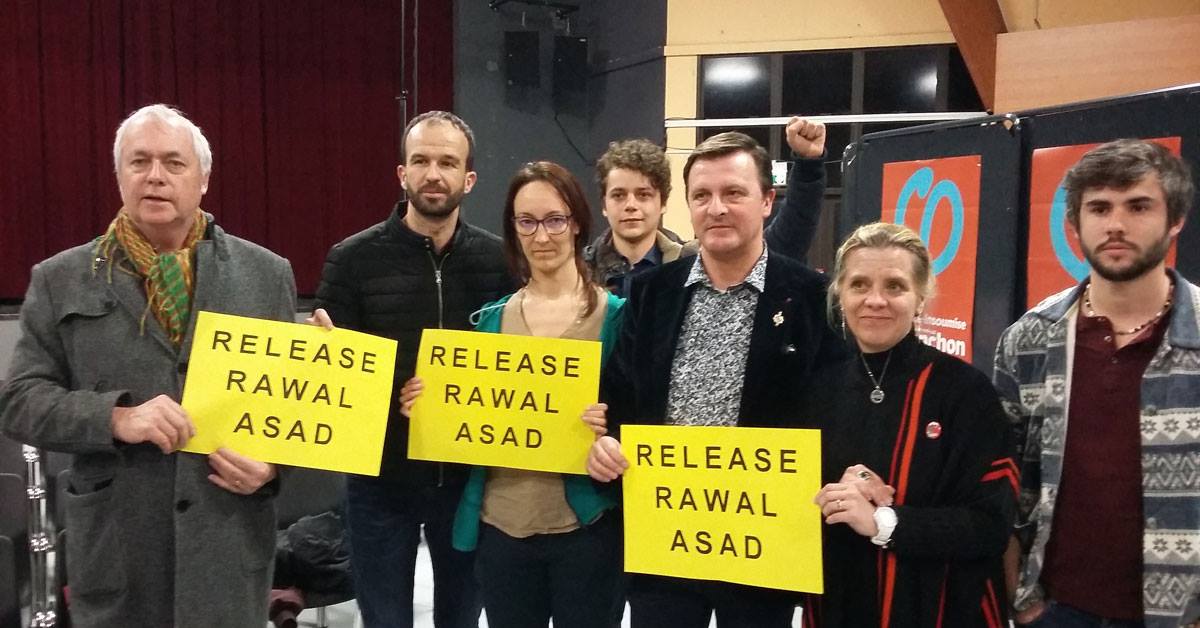 In the past week, there have been two major developments with the solidarity campaign in Canada. First, on 1 March, a letter was signed calling for Rawal's release by the York Federation of Students, which represents over 48,000 students: 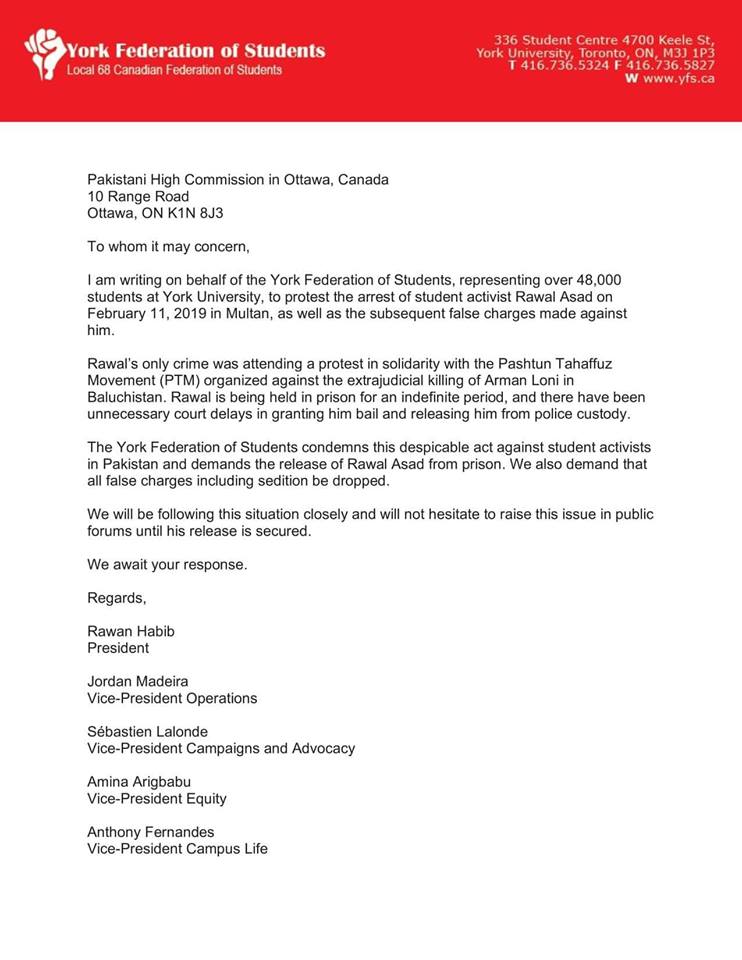 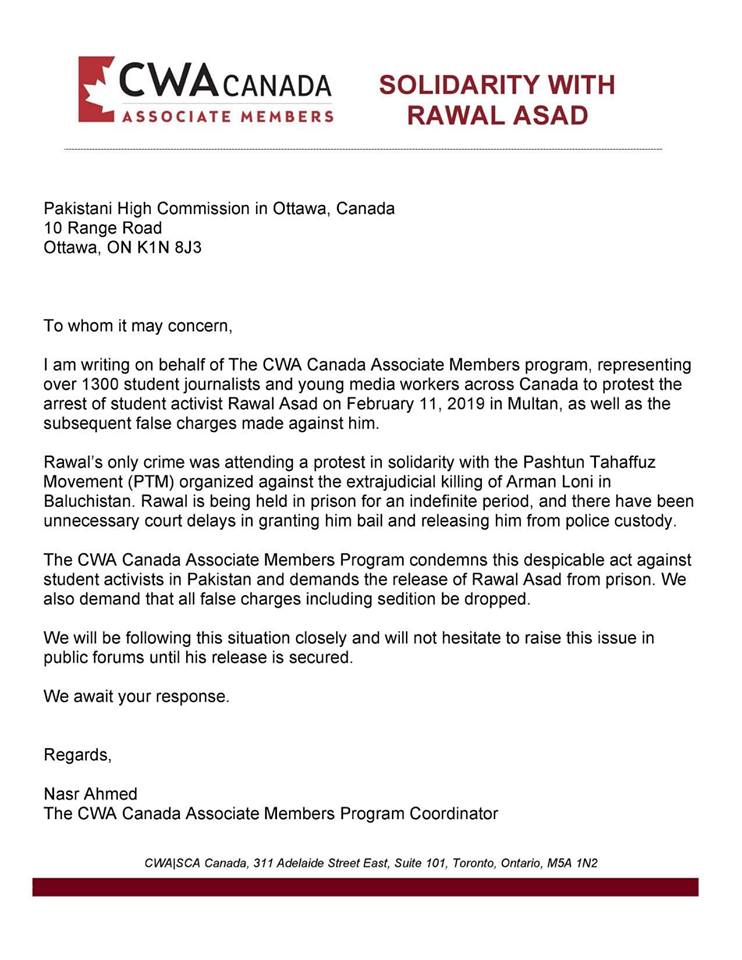 In Sweden, an open letter drafted by IMT comrades calling for Rawal's freedom was signed by a number of prominent politicians, unionists, union branches and activists, including:

Fianlly, today (5 March), the British comrades recieved a message from Ian Hodson, National President of the Bakers, Food and Allied Workers Union, who confirmed that a letter had been sent on behalf of his union to the Pakistan Consulate demanding Rawal be released. These demonstrations of support are a testament to the bonds of solidarity that connect workers and students everywhere!

Yesterday (4 March), our comrades across the world engaged in a day of unified action for Rawal, including the Belgian comrades, who protested outside of the Pakistani embassy in Brussels: 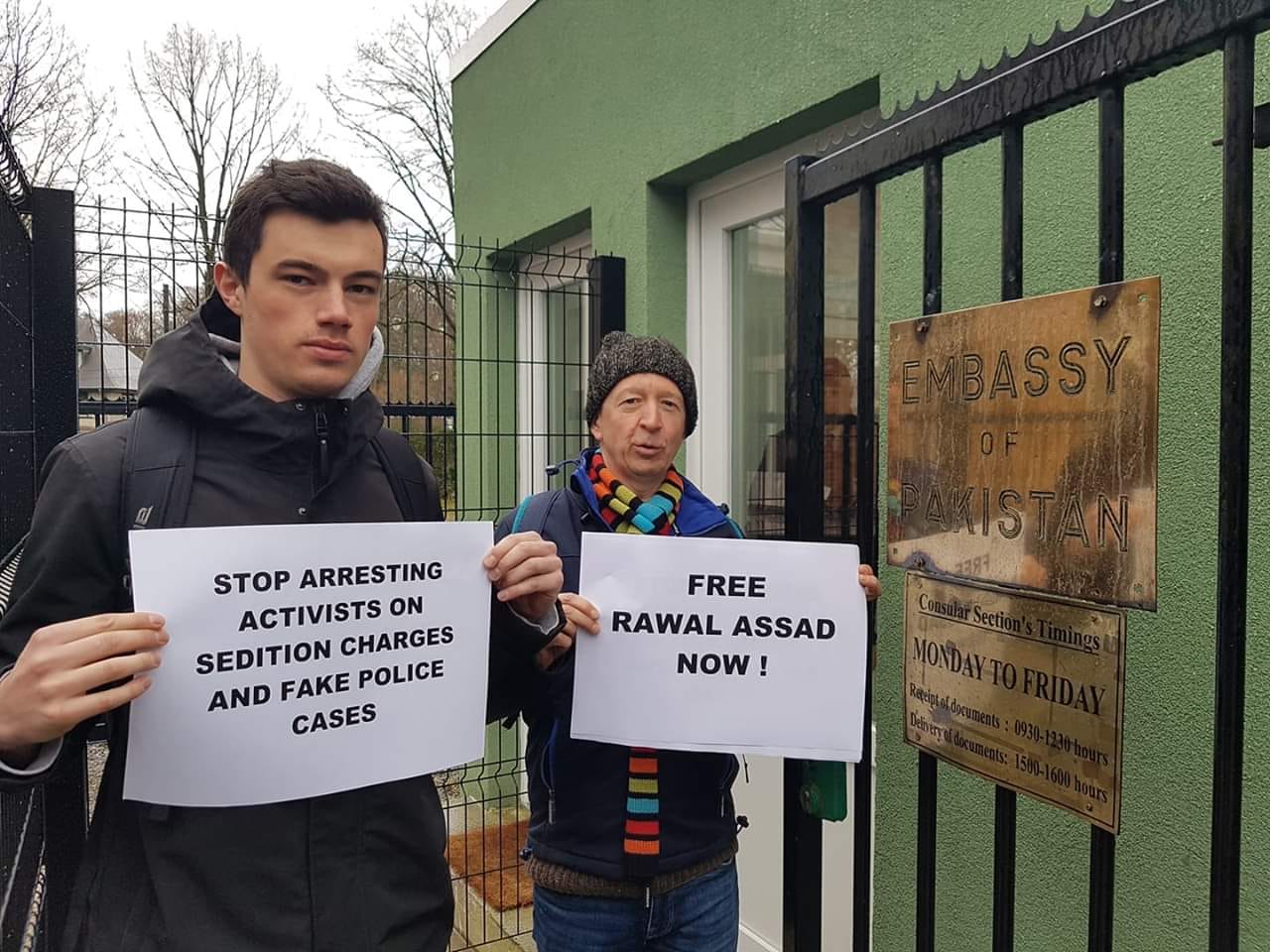 In London, the British comrades of Socialist Appeal and the Marxist Student Federation returned to the Pakistan Consulate for a second time, holding an hour-long picket where they (along with representatives of the Pakistan Trade Union Solidarity Campaign) chanted slogans and delivered speeches calling for Rawal's freedom:

After speaking out against the injustice of Rawal's detainment, Fiona (national organiser of the MSF) delivered an updated petition (now containing nearly 1,500 signatures) calling for our comrade's release to an official at the Consulate (as you can see towards the end of the video below):

In Toronto, comrades from Fightback (Canadian section of the IMT) held a solidarity picket in front of their consulate. For a second time, the consulate officials called the police on youth activists. It begs the question, what are the Pakistani state and its representatives so afraid of? 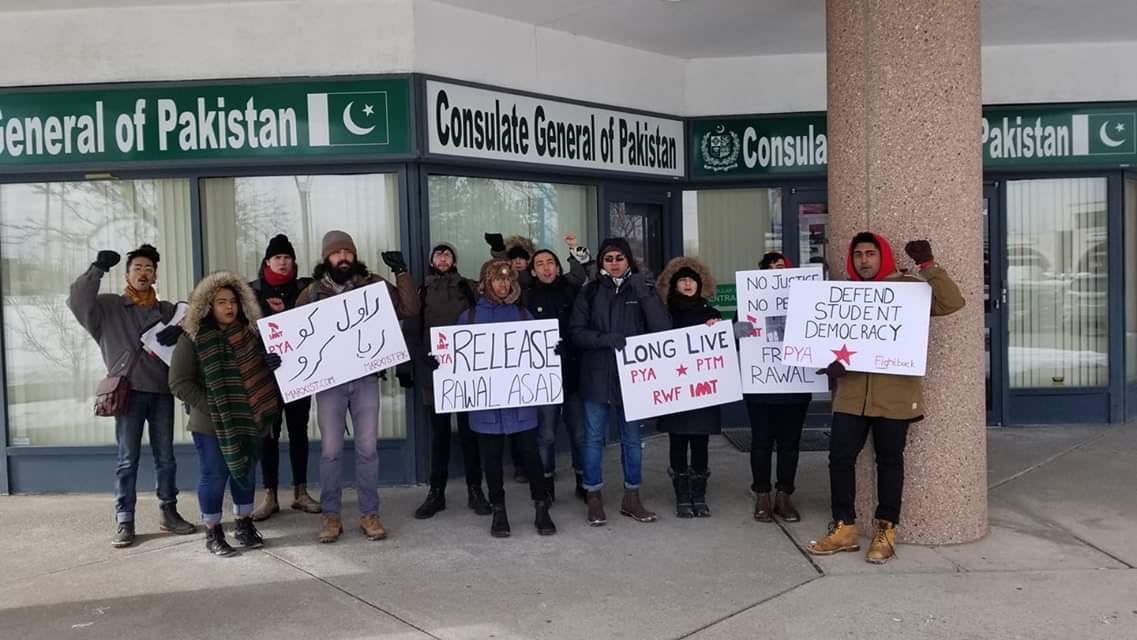 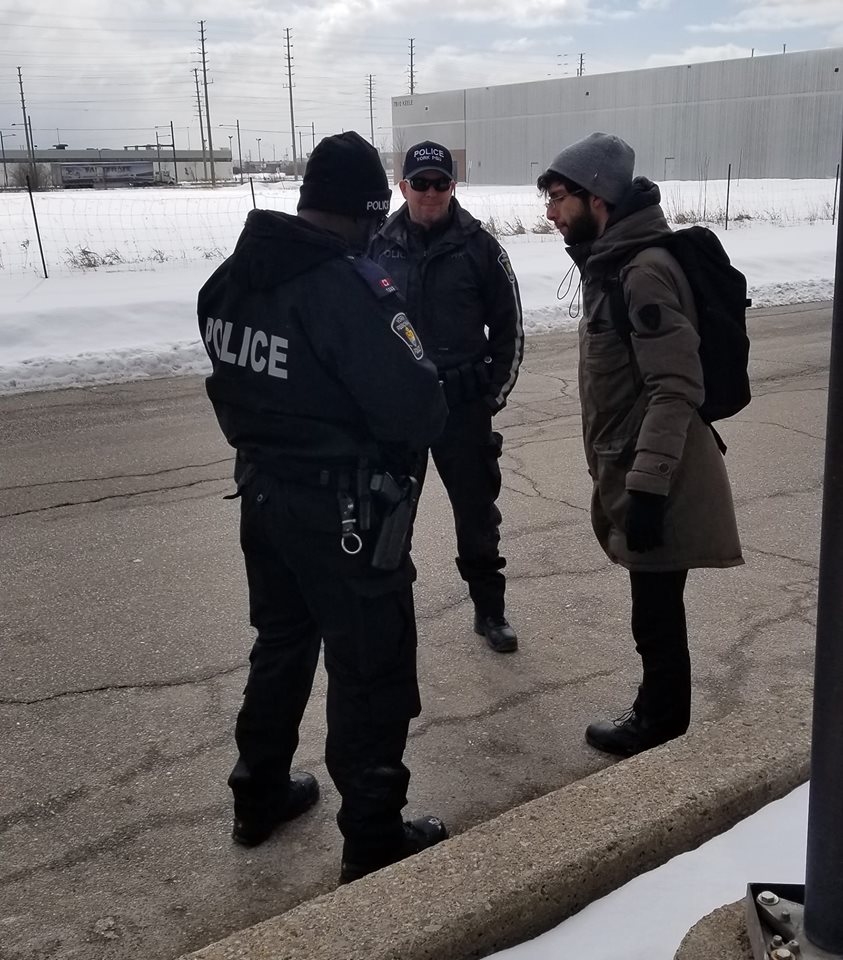 Another picket was organised by the Greek comrades at the Pakistan Embassy in Athens: 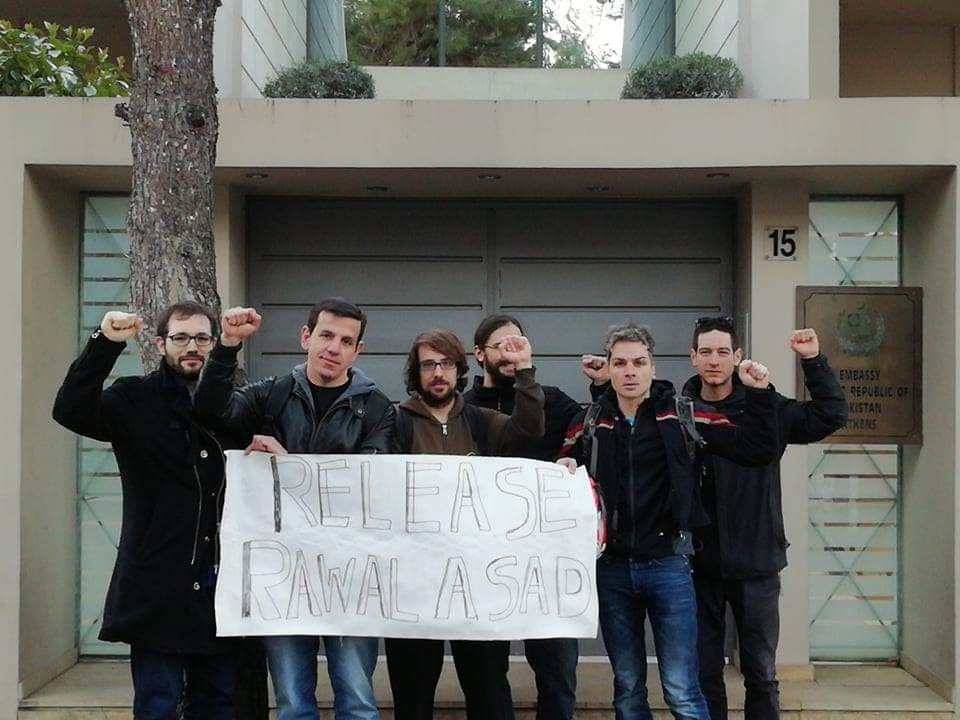 A number of Mexican student comrades held a protest at the Pakistan embassy in México City:

In Switzerland, IMT comrades held a protest in front of the Pakistan embassy in Bern. Police tried to shield the embassy from the protest, but eventually after five comrades were admitted, who handed an open letter to the embassy staff that was signed (among many others) by a national MP of the JUSO and the president of the Basel section of the Socialist Party: 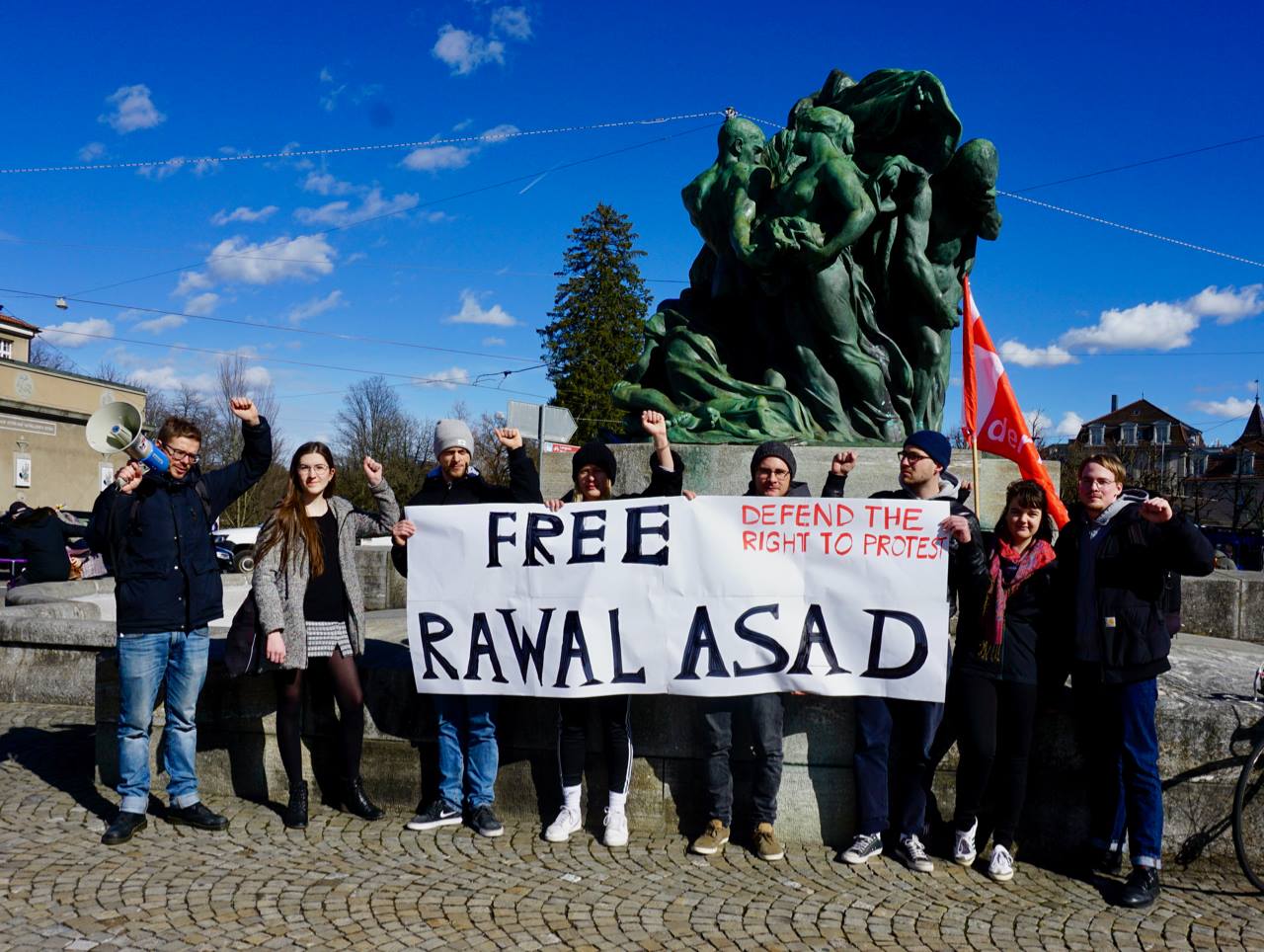 In Russia, where pickets are illegal, a single worker activist protested outside the Pakistan embassy in Moscow and submitted a letter addressed to the ambassador, prime minister and chief justice of Pakistan, demanding an end to the persecution against Rawal Asad: 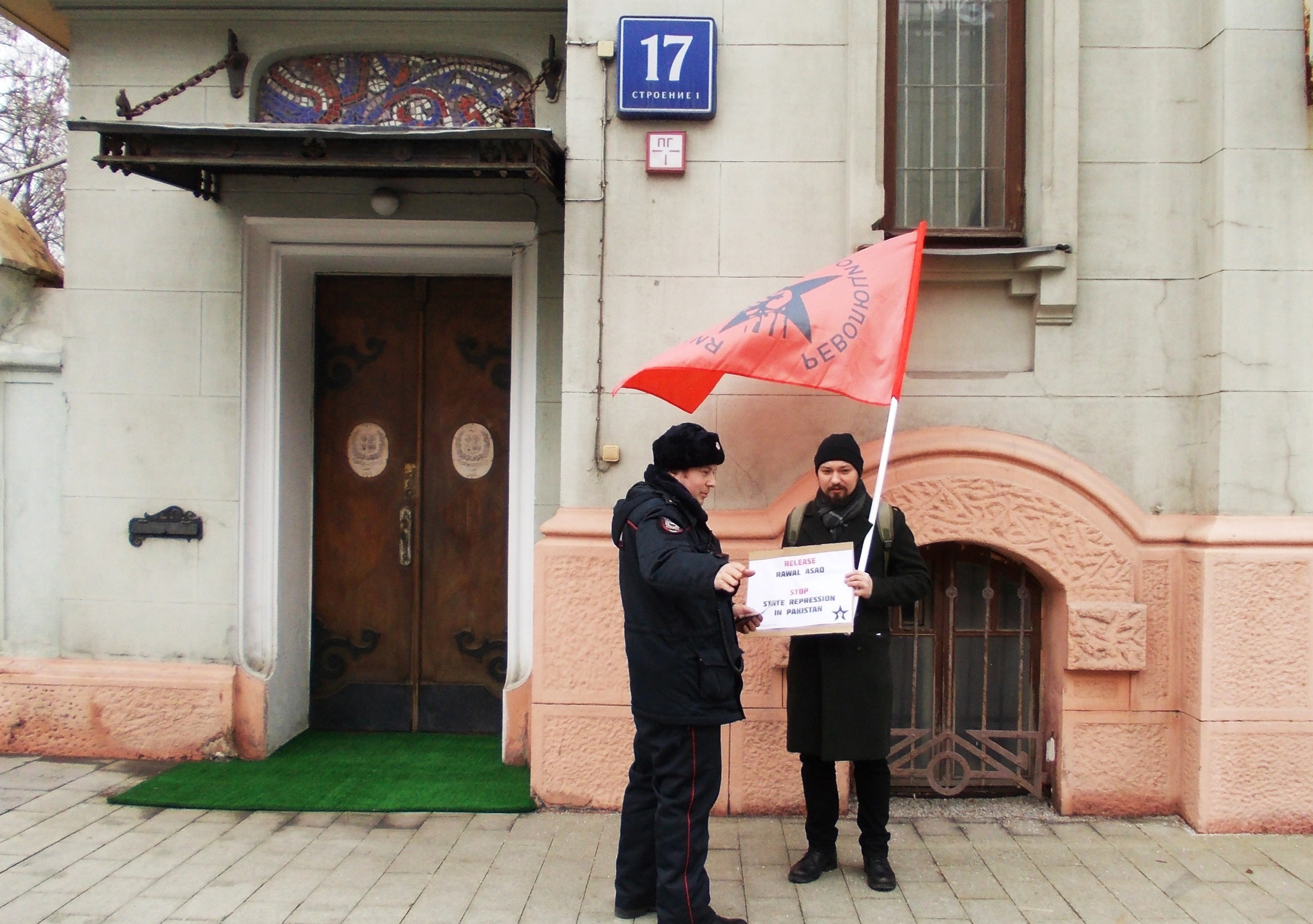 Finally, comrades from Esquerda Marxista held a picket at the Pakistan Consulate in Sao Paulo, Brazil and delivered a letter to the Consular demanding Rawal's release:

Elsewhere in the world, activists took part in various actions on 4 March. For instance, Socialist Revolution (our section in the USA) ran a coordinated campaign of telephoning the Embassy of Pakistan in Washington, demanding information on Rawal's case and insisting action be taken to secure his freedom. Meanwhile, comrades in the Czech Republic sent a video message offering their solidarity to Rawal:

Throughout the world, supporters, comrades and activists have been phoning and writing to their embassies and will continue to do so in coming days. All of these actions are intended to keep pressure and a spotlight on the scandalous activities of the Pakistani state, which is victimising anyone speaking out against the exploitation and oppression of workers and youth. The fake charge of sedition against Rawal is a gross miscarriage of justice. Release Rawal Asad!

Further solidarity photographs from our supporters all over the world: 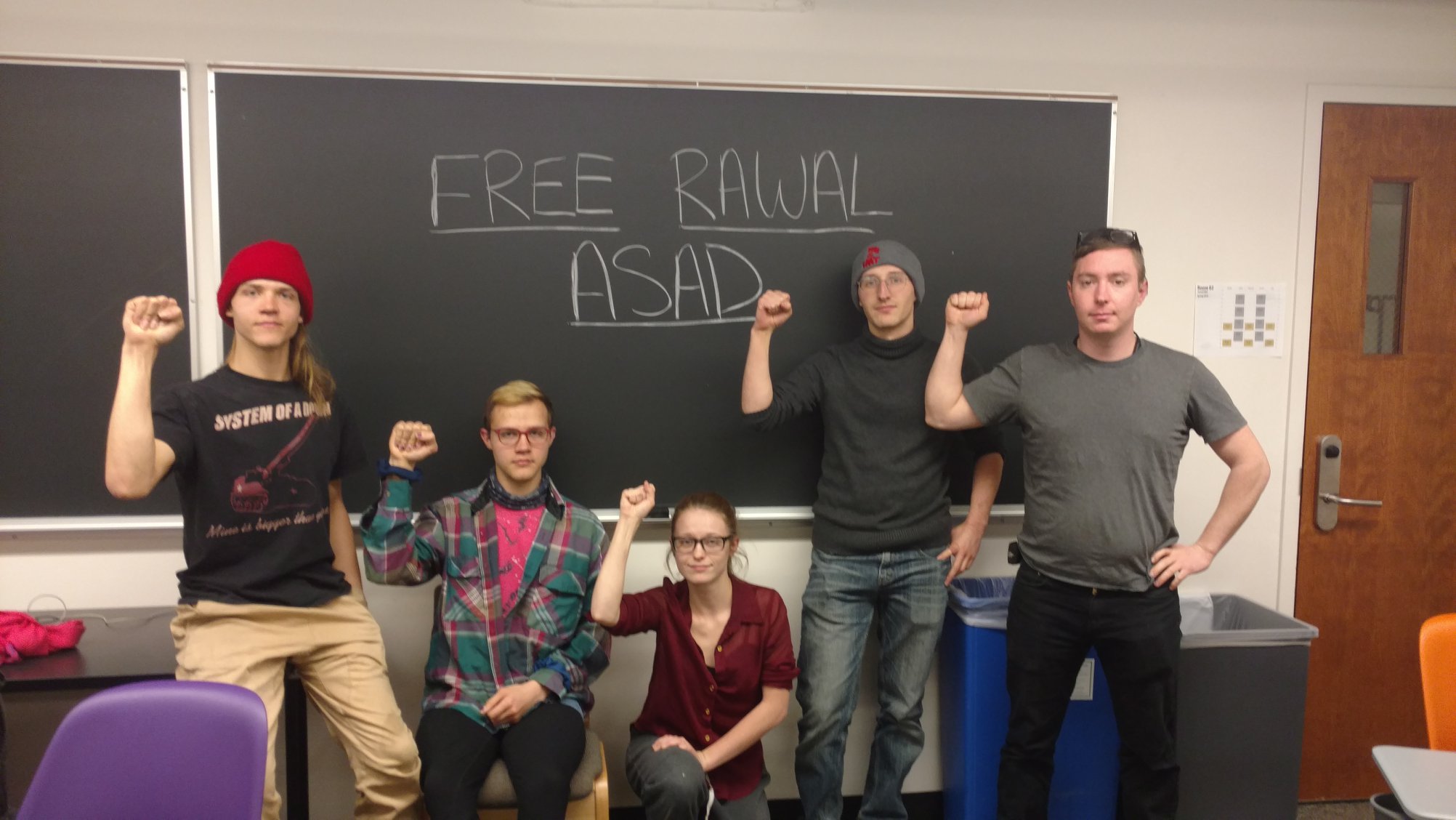 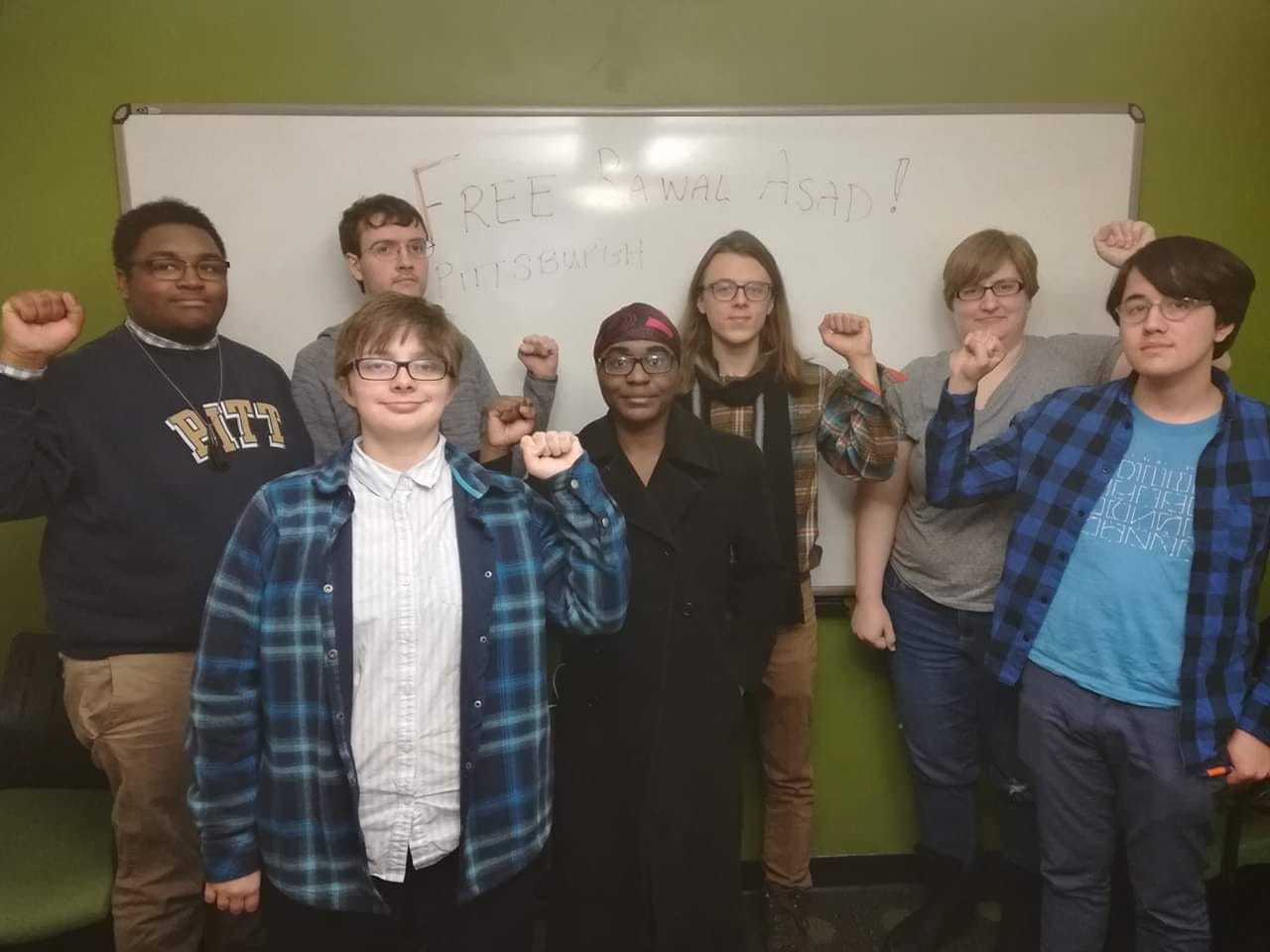 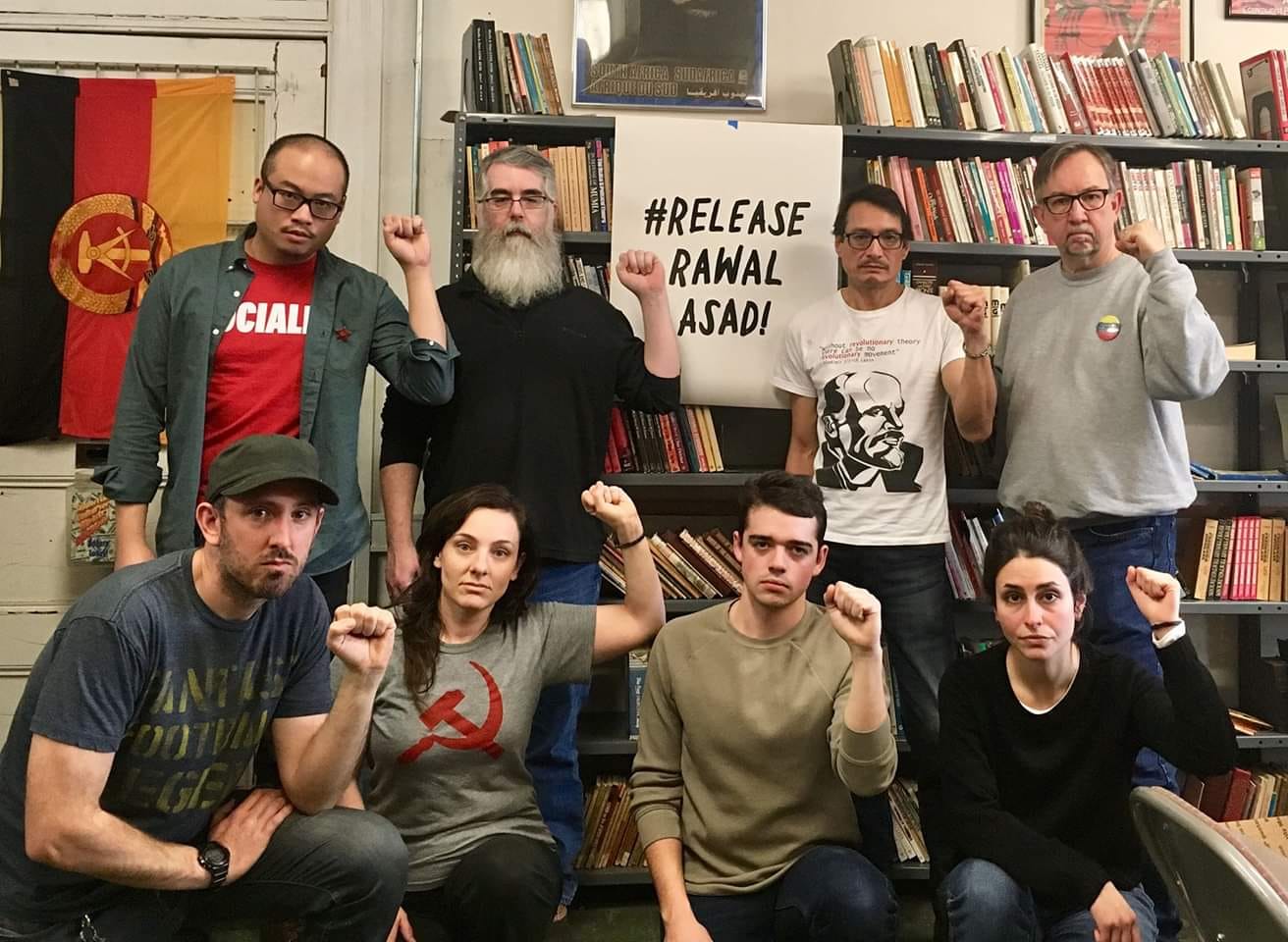 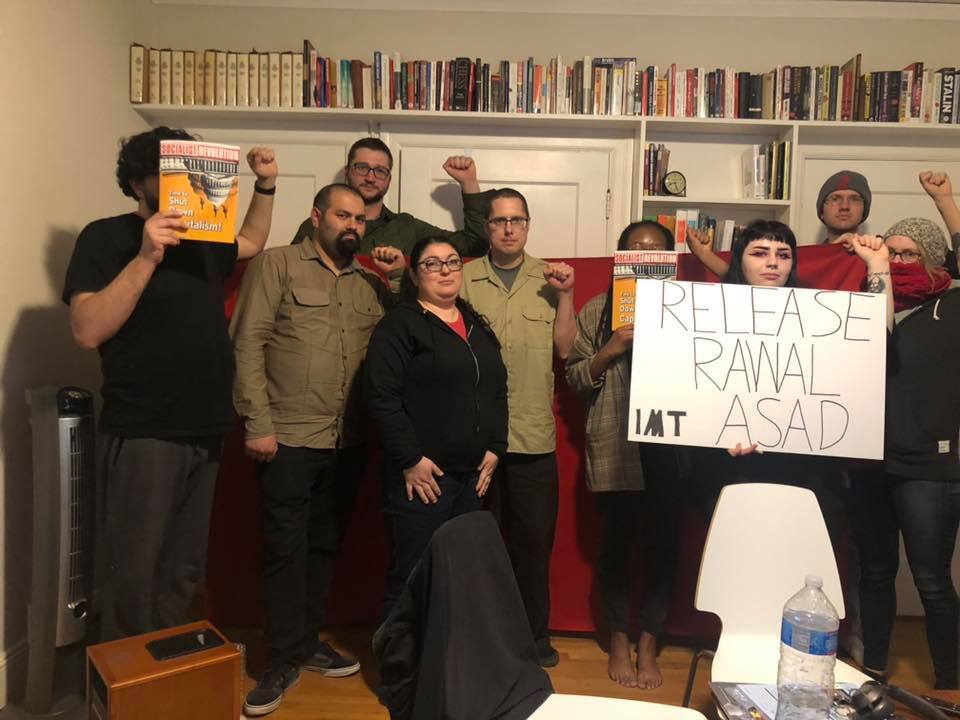 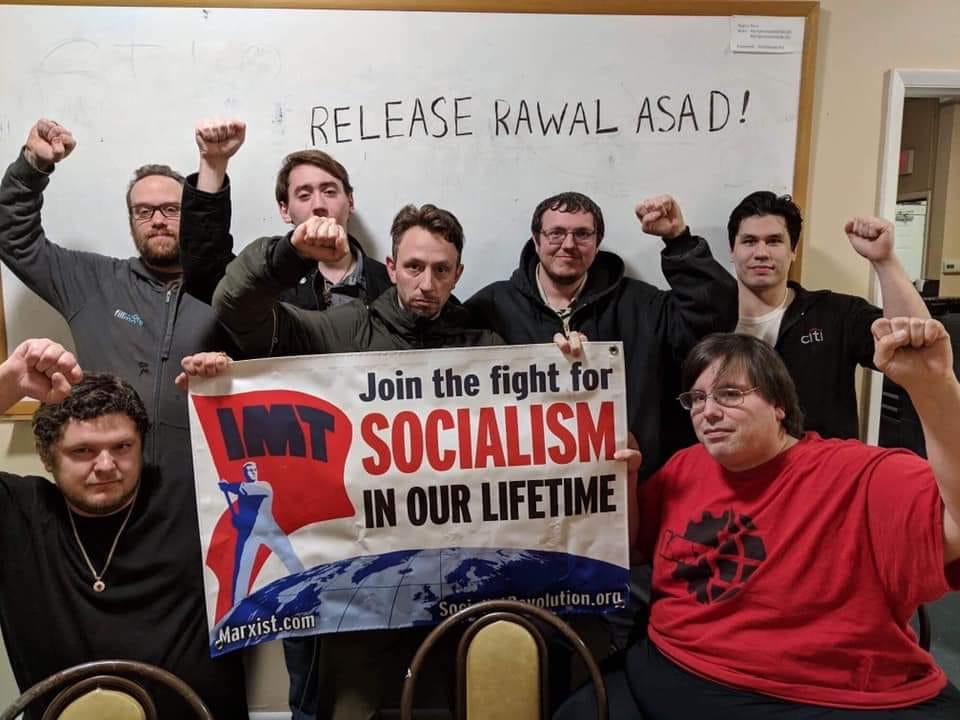 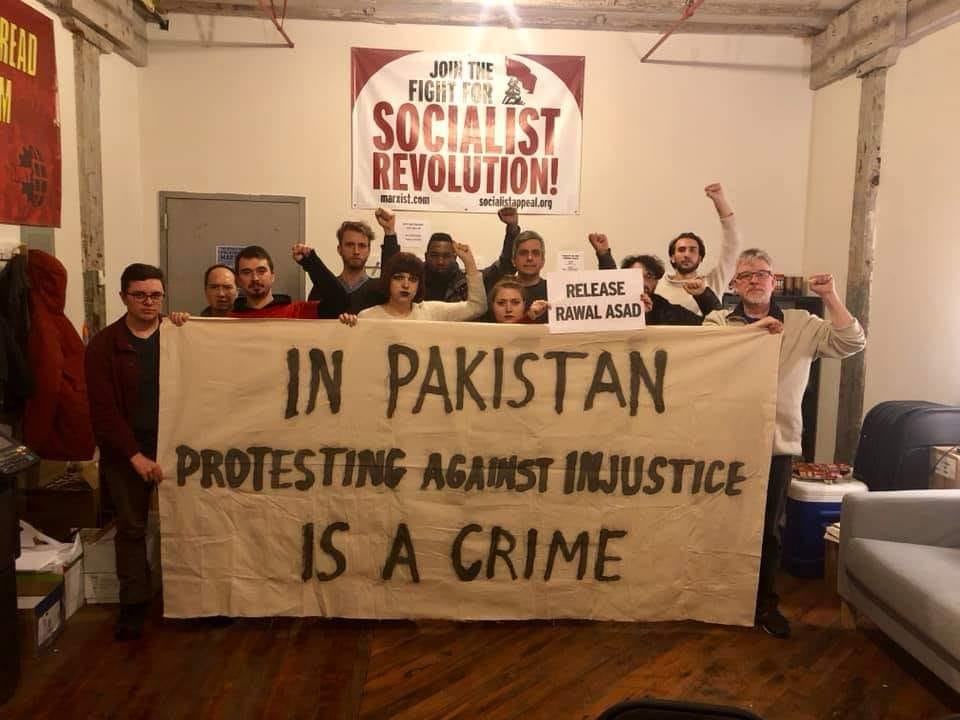 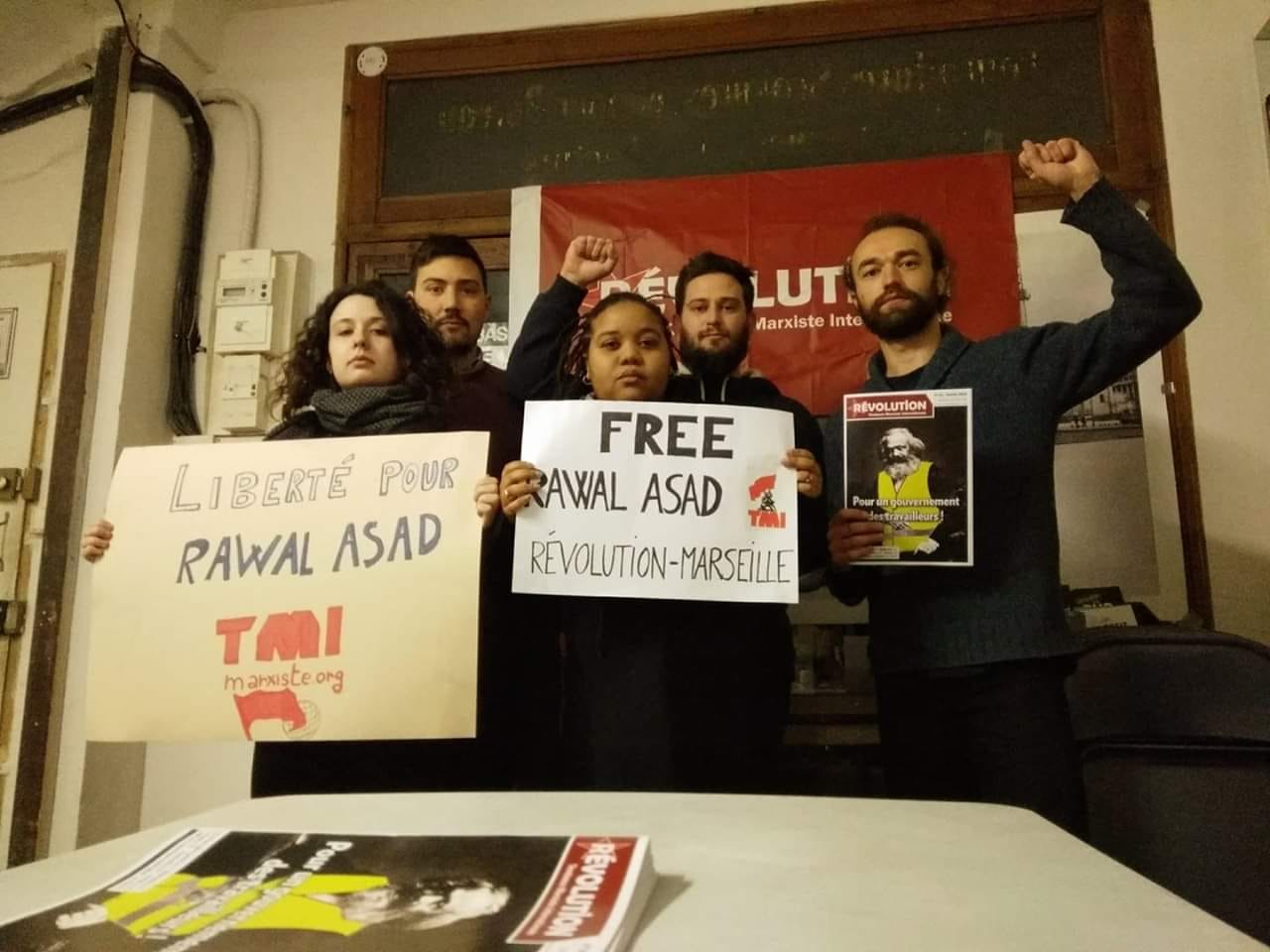 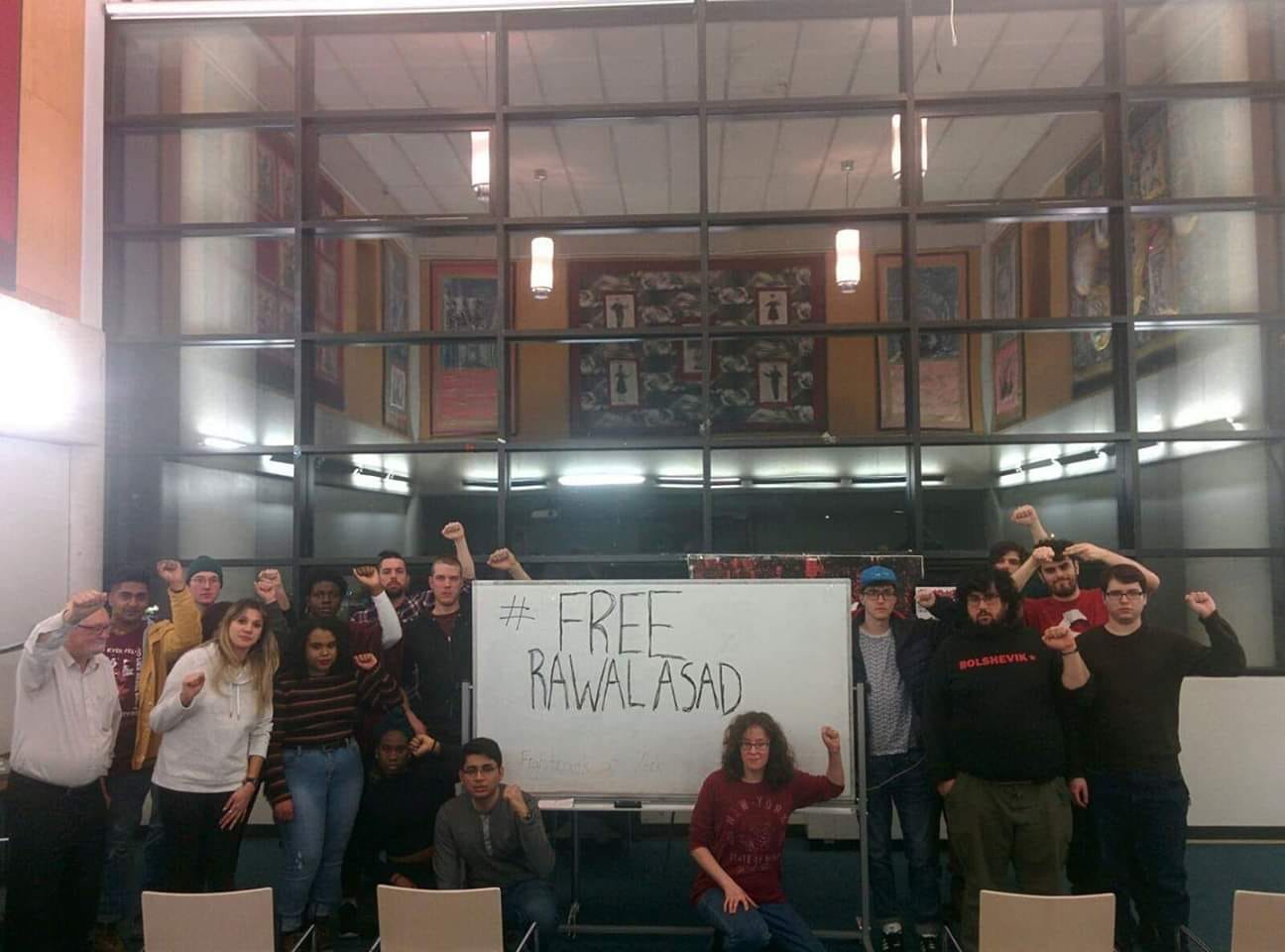 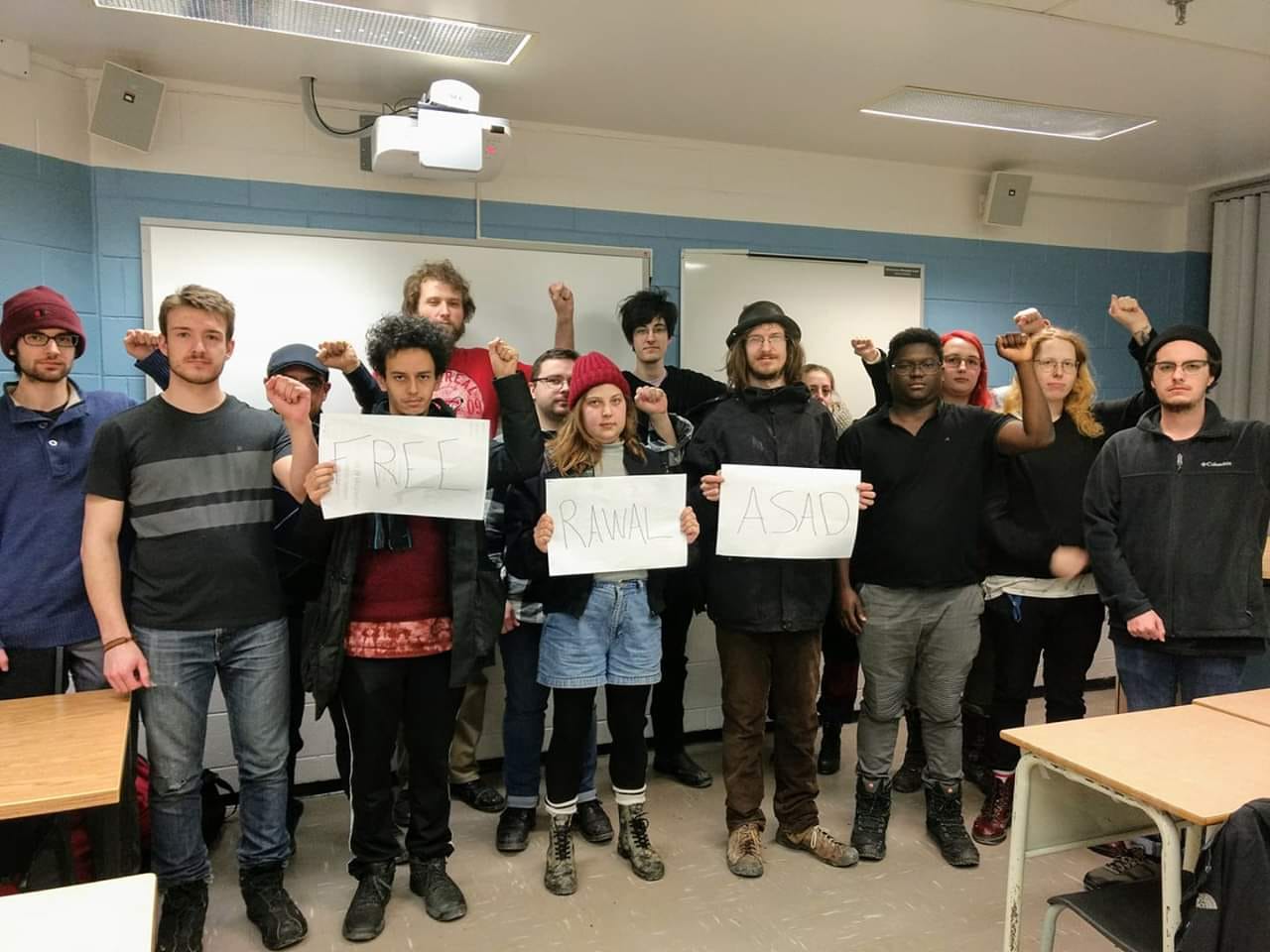 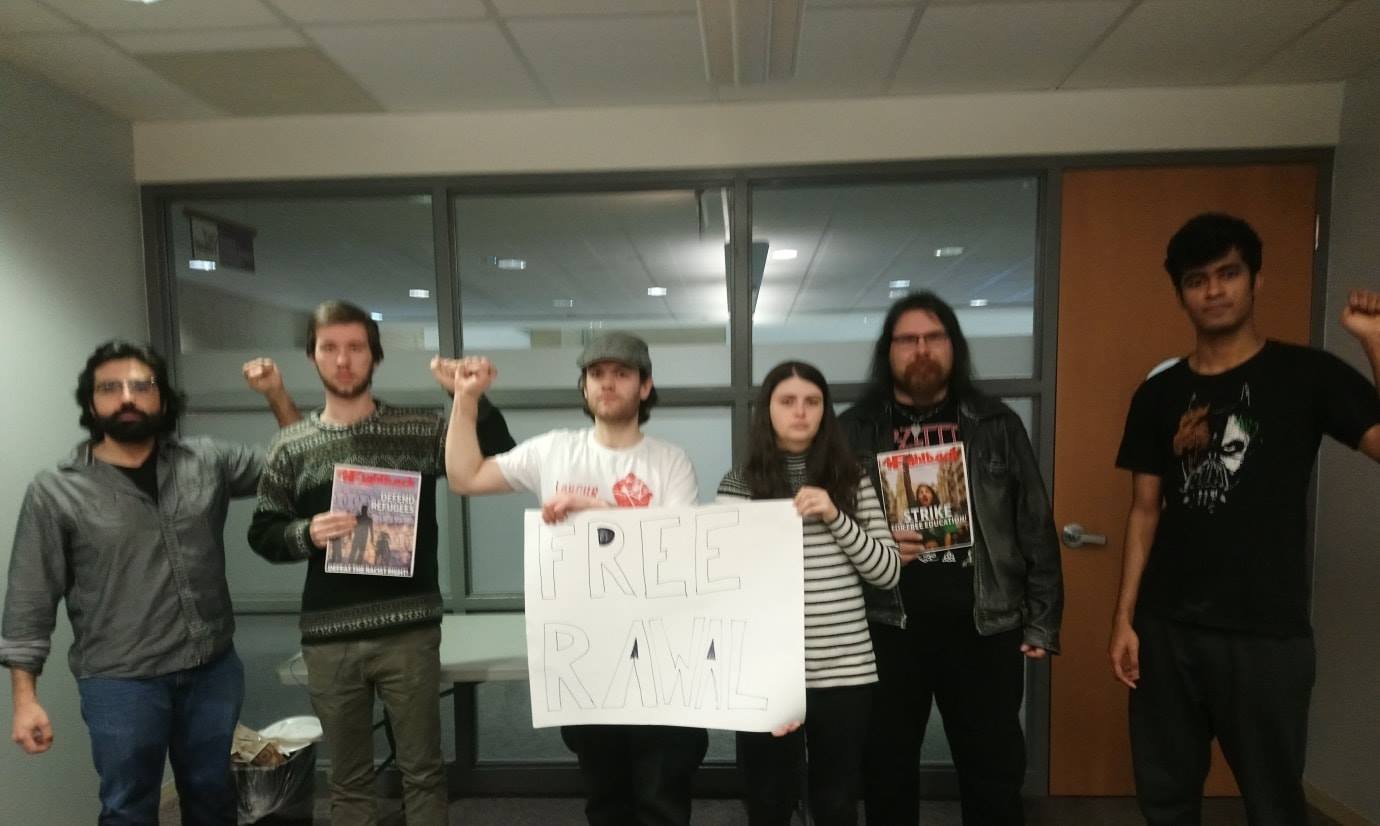 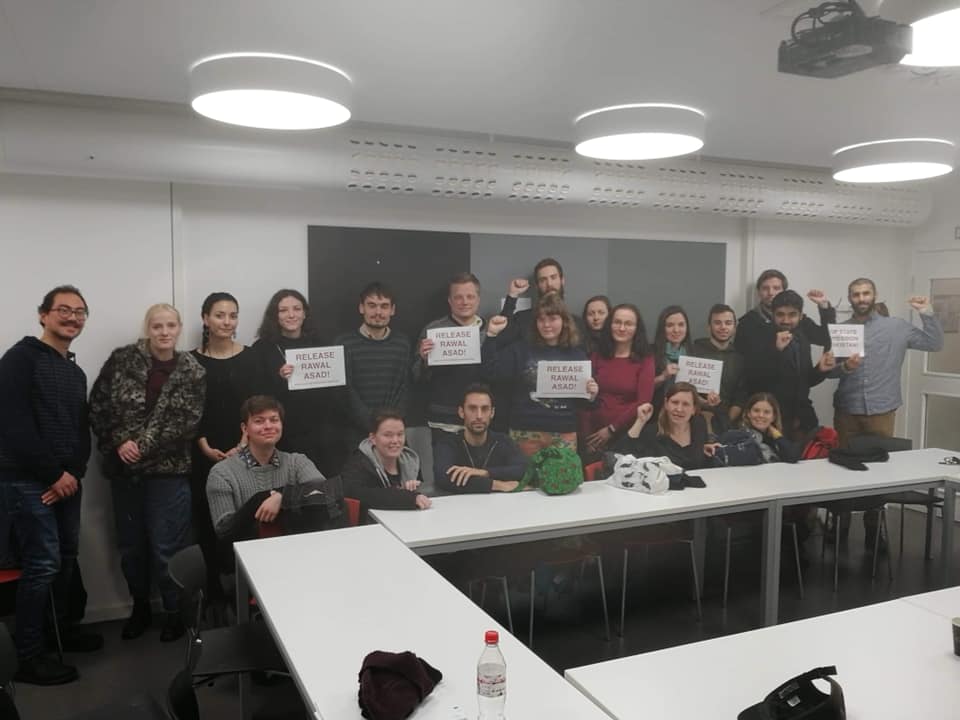